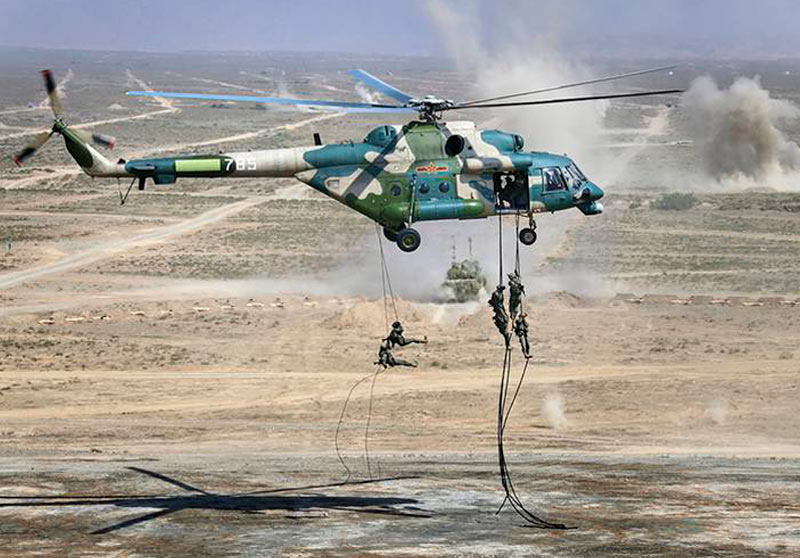 Troops disembark from a Chinese military helicopter during the joint war games held by Russia and China in northwestern China’s Ningxia Hui Autonomous Region.
Savitskiy Vadim/Russian Defence Ministry/AP
American troops had barely begun their withdrawal from Afghanistan in August when Russia’s military began flexing its muscles near the country’s border, ostensibly in attempts to discourage the spread of terrorism.

Moscow seemed to send mixed messages, with its Kabul-ensconced diplomats describing the purportedly new Taliban as “normal guys” and declaring the Afghan capital a safe place, even as Russian President Vladimir Putin grudgingly called the takeover a reality they had to work with—all while orchestrating joint military exercises with China and other border nations.

The first of several exercises, said China’s official Xinhua News Agency, aimed to “deepen the joint anti-terrorism operations between the Chinese and Russian militaries and demonstrate the firm determination and strength of the two countries to jointly safeguard international and regional security and stability.

“It reflects the new height of the China-Russia comprehensive strategic partnership of coordination for a new era and of the strategic mutual trust, pragmatic exchanges and coordination between the two countries.”

[Russia] may be warning Washington to stay out of Southwest Asia.

Conducted in northwestern China the week of Aug. 9, it was among a series of military drills involving so-called “regional partners.” Earlier, Russian troops, tanks and aircraft had conducted exercises with Uzbek and Tajik militaries just 20 kilometres from the Afghan border. More than 2,500 soldiers were involved.

A month later, nine nations, including China and Pakistan, gathered in Russia’s Orenburg region north of Afghanistan for “Peace Mission-2021,” a show of force evidently meant to send a message to the warlords in Kabul that any renewed dalliances with al-Qaida or other terrorists would not be tolerated. 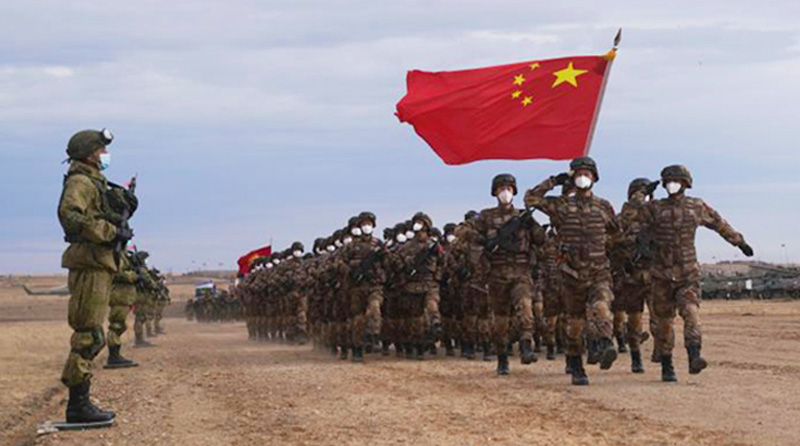 Adopting an apparent leadership role in the wake of the Taliban takeover and America’s most devastating military setback since Vietnam almost half a century ago, Moscow has reached out across Southwest Asia and beyond out of concern, it says, over terrorism.

It’s made overtures to India, the European Union and the Americans, to whom Putin floated the idea of hosting U.S. troops on Russian bases. At the same time, it may be warning Washington to stay out of Southwest Asia.

“We will pursue our own policies based on our own objectives,” a U.S. official told The Wall Street Journal last month. “The reality is Russia is an element of the equation in the region and so we are engaging with them.”

China shares a narrow border with Afghanistan. Both Beijing and Moscow have their own terrorist issues and don’t want a resurrection of the al-Qaida training facilities that popped up in Afghanistan before the 9/11 attacks.

“The conditions could be set for a reconstitution of al-Qaida.”

“We want that Afghan soil should not be a source of terror for other countries in the region,” the Russian ambassador to India, Nikolay Kudashev, told media in New Delhi on Sept. 6.

On that score, all sides appear to agree.

The chairman of the U.S. Joint Chiefs of Staff, General Mark Milley, told the House Armed Services Committee that while the terrorist threat from Afghanistan is now less than it was on 9/11, “the conditions could be set for a reconstitution of al-Qaida and/or ISIS.” 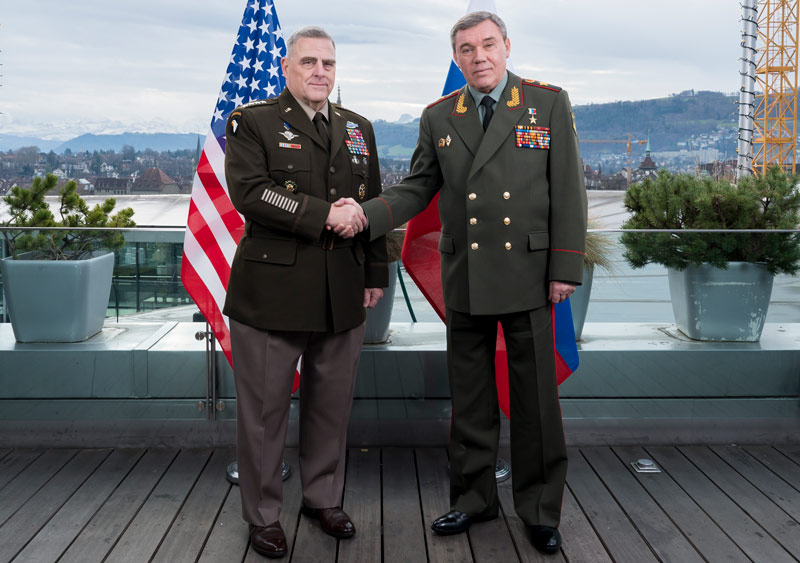 General Milley with Russia’s General of the Army, Valery Gerasimov, in Switzerland on December 18, 2019.
Wikimedia
“It’s a real possibility in the not too distant future—six, 12, 18, 24, 36 months, that kind of time frame—for reconstitution of al-Qaida or ISIS,” Milley said Sept. 28.

There could be a lot more at stake in Afghanistan than terrorism.

“Al-Qaida has been degraded over time,” he said. “Now, terrorist organizations seek ungoverned spaces so that they can train and equip and thrive, and so there is clearly a possibility that that can happen here, going forward.

“Our goal is to maintain a laser-like focus on this so that it doesn’t happen.”

There could be a lot more at stake in Afghanistan than terrorism and influence in a volatile and highly strategic part of the world.

The country is rich in untapped minerals, an estimated $1 trillion worth of lithium, gold, iron, copper and gems among them.

China and others have made no bones about the fact they are anxious to exploit a growing global reliance on rare-earth metals to produce consumer technology, efficient batteries, advanced military hardware and sophisticated computer chipsets. Afghanistan is also rich in untapped oil, natural gas, chromium, uranium, marble, coal, sulphur, lead, zinc, travertine, talc, gypsum and bauxite.

But the country has been at war virtually non-stop since the Soviets invaded in 1979. It is landlocked, undeveloped and dirt poor. There are no ports, railways are sparse and its highway system is marginal, at best. There are few airports of consequence. 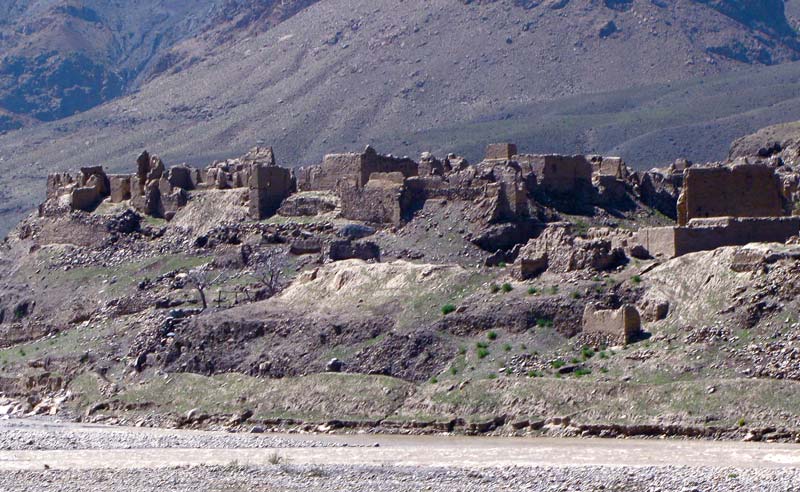 An Afghan village left in ruins after it was destroyed by Soviet forces.
Wikimedia
Whether Russia and/or China have long-term designs on Afghanistan’s wealth of natural resources may be moot. While hospitality is a fundamental juxtaposition in the war-torn country, history has shown it is resistant to outside occupation and, particularly, exploitation.

Potential riches notwithstanding, the effort, as coalition countries are now struggling to reconcile, may be more trouble than it’s worth.