The Erdoğan empire has done plenty of harm 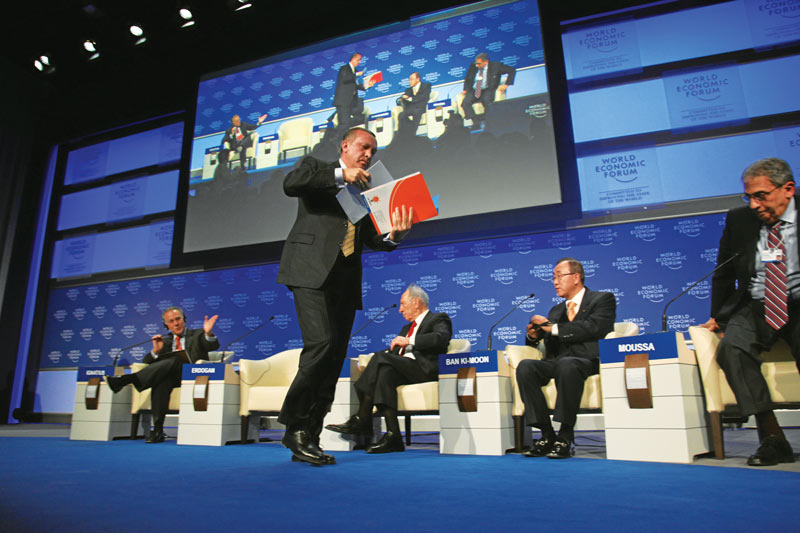 Recep Tayyip Erdoğan—then-prime minister of Turkey—walks off the stage after an angry exchange with Israeli president Shimon Peres during a panel discussion at the World Economic Forum in Switzerland in 2009.
Wikimedia

The Ottoman Empire was once a great power, controlling the Middle East, much of the Balkans and the African shores of the Mediterranean. Despite its size and population, it was widely seen as “the sick man of Europe,” and the First World War led to the collapse of the empire, the loss of most of its territories outside Turkey, and the rise of a secular government under the leadership of Kemal Atatürk.

Atatürk was a soldier who had come to prominence for leading the fight against the Allied attack on Gallipoli in 1915. In 1923, after the Ottoman defeat in 1918, he became president of the republic he largely created. He then began a process of modernization with political, social, religious and cultural reforms that separated the new nation from the sclerotic empire.

Today’s Turkey is still the state Atatürk created, but—while still officially secular—a sense of religious nationalism has spread through the country. It is an increasingly Islamist nation of some 82 million people with a gross national product approaching $800 billion. And it is very interested in expanding its power and influence in the Middle East.

The elected president, Recep Tayyip Erdoğan, is increasingly authoritarian and his regime, which put down an attempted military coup in 2016, has purged the armed forces, the public service and the universities, cracked down on dissent, and governed with the help of a state of emergency. Erdoğan is no democrat and, following the coup, he and many of his supporters have become vocally anti-Western and increasingly nationalist.

Adding to the resentment is that Turkey, despite trying since 1987, has not managed to secure admission to the European Union or its predecessors. Turkey has been useful to the EU in helping control the flood of refugees and migrants from Syria, Iraq, Libya and other desperately poor countries, but Erdoğan, lashing out at leaders he sees as anti-Muslim, including President Emmanuel Macron of France, has made membership all but impossible.

It is, however, a member of the North Atlantic Treaty Organization, and since its accession in 1952 (at the same time as Greece, with which Turkey has historical and current grievances), it has been the anchor of NATO’s southern flank.

Turkey is one of the heavyweights in the Middle East.

Its armed forces number almost 900,000, although since the purge of “disloyal” senior officers, the military’s capabilities may be less than its numbers and relatively modern equipment suggest. Still, Turkey’s annual defence budget exceeds the NATO goal of two per cent.

Erdoğan is increasingly unhappy with NATO, resentful of European and American pressure on his government’s human rights issues and growing authoritarianism, and has turned to Russia for advanced anti-aircraft missiles. This has caused conniptions in NATO and especially in Washington, but the alliance has been loath to push Turkey out for fear Erdoğan will cease co-operating in slowing migrant flows into the EU. Washington nonetheless formally dropped Turkey from the F-35 fifth-generation fighter program in April 2021 because of its Russian missile-defence acquisition.

Whether in or out of NATO, Turkey is one of the heavyweights in the Middle East, alongside Israel, Iran and Russia.

In 2016, Erdoğan pledged “to go and confront [problems] wherever they nest.” This is one promise he has kept. Turkey has put an airbase and troops into Libya, for example, in an attempt to bolster its influence in North Africa and its maritime claims in the Mediterranean Sea.

It has reportedly played a major role in Syria’s internal conflicts, allowing Islamic State terrorists to use Turkish soil as a base from which to strike at President Bashar al-Assad’s regime in Damascus and, perhaps, more important from Erdoğan’s point of view, at the Kurds.

The Kurds have long sought their own nation—Kurds in Turkey as much, or even more than the Kurdish populations in Syria and Iraq. Erdoğan sees the Kurds as terrorists and has fought them since 2015. His anger at American support for the Kurds fighting the Islamic State or the Assad regime is palpable.

Turkey has also supplied arms to Azerbaijan in its war with Armenia over the region of Nagorno-Karabakh. (Nothing riles the Turks so much as being accused of genocide for their gross maltreatment of Armenians during the First World War.)

At the same time, Erdoğan’s government has stationed troops in Somalia and Qatar and supported the anti-Saudi forces fighting in Yemen. Turkey’s proxy wars seem to be its way of inflating its Middle East prominence.

Oil and gas discoveries in the eastern Mediterranean are another flashpoint—with Turkey facing off against Greece, France, Cyprus, Israel and Egypt.

Almost all its gas is imported, so Turkey is desperate to control its own supply of fuel. As a result, the Greek and Turkish navies have bumped together as exploration, fruitless so far, continues.

There are longstanding territorial issues between Athens and Ankara as well, a history of mistrust and conflict over Cyprus and no love lost despite seven decades of co-operation in NATO. Observers reckon Erdoğan, fearful of being shut out of Mediterranean gas and possible pipelines, might lash out at his antagonists. His hardline diplomacy suggests the worst.

In an ideal world, the EU would have accepted Turkey into its ranks. That no longer seems possible, and NATO remains its last link to the Western democracies. That link may not last much longer if Erdoğan persists in increasing his military procurement with Russia and in fighting proxy wars.

There is some domestic opposition to Erdoğan’s regime and recent urban elections went against the ruling party. Whether Erdoğan, with his government enmeshed in corruption scandals and fighting wars with dubious aims, can remain in power is uncertain at best.

However, whether a new administration would undo Erdoğan’s policies is unclear. The Erdoğan empire may never equal the Ottoman Empire in size, but it has done enough harm to set Atatürk spinning in his grave.