Home » Blog » The ducks of war

The ducks of war 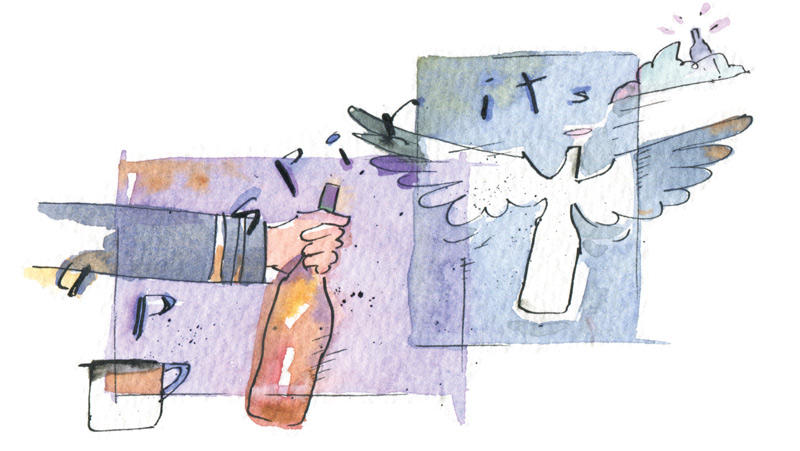 Retired naval captain Stephen Oldale of Victoria, B.C., remembers the day back in 1972 when the Royal Canadian Navy abolished the daily rum issue. He says he presided over the very last call of “Up spirits. Hands to muster for grog” while serving as navigating officer on HMCS Chaudière.

He tells the story: “Chaudière at the time was west of Hawaii in the second-to-last time zone of the Western Hemisphere before the international date line (and tomorrow). Our ceremony under the circumstances was somewhat elaborate as it marked the end of a long tradition in Commonwealth navies.”

The issue was half a gill, or two and a half ounces.

“The rules were that if one took the issue ‘neat’ it had to be consumed in front of the issuing officer, but if water, cola and the like were brought…the rum could be mixed in your tot mug—many of which were quite unique—and then taken to the mess deck. A lot of clever old hands would appear with a dark tot mug, a dark liquid therein, passing it off as cola to naive young issuing officers whereas in fact it was neat rum being added to existing rum from the ‘saves,’ later to be consumed at MPUs (monumental piss-ups).”

The rum was specially blended and bottled for the navy by what was then Captain Morgan Rum Distillers of Waterloo, Ont.

After the final issue aboard Chaudière, there were three bottles of Royal Canadian Navy rum left, Oldale recalls.

“It was decided that the coxswain would get one bottle, the chief ERA (engine room artificer) the second and yours truly the third.”

As an aside, the mix of rum and water was known as “grog” in the Royal Navy after Admiral Edward Vernon (known as “Old Grog” because of his grogram cloth coat) first ordered the rum issue diluted in 1740.

Another contributor asks for anonymity in the following tale.

He enlisted in the Queen’s Own Rifles of Canada reserve in April 1943 when he was 17.

“I had never fired any kind of a gun in my life, not even a BB gun.”

For their first rifle practice the recruits were handed five rounds and a paper target, with red rings and a small black bullseye, which were hung at the back of the range.

“I listened carefully to the instructor: ‘Lie on your belly, make a tripod with your elbows, aim, hold your breath and gently pull the trigger.’

“I did that, and after the command of fire, I could see black dots appearing on the targets of those near mine, but nothing on my own.”

Having expended his rounds he stood humiliated, contemplating a pristine target.

The shooters were ordered to retrieve their targets and he discovered why there were no black dots on his. All five shots had gone through the black bullseye for a perfect shoot.

“I seriously doubt I could do the same now.”

In the next entry, the ship in question will remain anonymous for reasons which will be obvious.

In 1944, a spanking-new RCN frigate sailed into St. George’s in Bermuda to begin developing exercises to prepare for the rigours of North Atlantic convoy duty.

The ship first tied up alongside, but after funnel smoke drifted across the jetty and wafted into the office of the commanding admiral, the newcomer was told to anchor out in the bay.

The chain hung up briefly, then there was an audible pop and the anchor rose normally.

Next morning, the order was given to heave anchor. The capstan began to turn, the chain clanked in and then stopped. The anchor was directly below the bow. Further efforts to haul it in started to pull the bow down.

Heads were scratched, ideas were exchanged and the decision was made to release the chain. As it paid out, the ship would shift position and that might free the fouled anchor.

After a pause, the capstan began to turn again. The chain hung up briefly, then there was an audible pop and the anchor rose normally. The ship put to sea for exercises.

On returning to the anchorage at the end of the day, the senior officers were suddenly summoned to report to the admiral.

It appeared the anchor had fouled the electrical cable which fed power to St. George’s. The pop had been the power line snapping.

In his memoirs he recounts how he and his fellow pilots borrowed ducks from a neighbouring farm and tried to train them to walk in formation.

“They were not very adept pupils, however, and instead of walking at correct distances apart, would keep looking back at us and jostling into the men on the right and left,” wrote Bishop in his book, Winged Warfare.

Do you have a funny and true tale from Canada’s military culture? Send your story to [email protected].