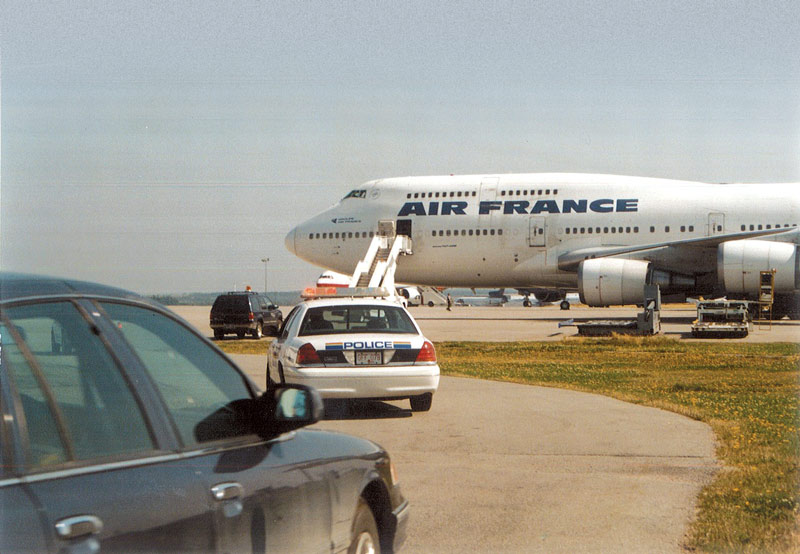 A grounded airplane at Gander International Airport on Sept. 11, 2001. Aircraft in U.S. airspaces were diverted or forced to land after the 9/11 terror attacks, and 38 planes —carrying some 6,500 people—landed in and around Gander.
Town of Gander

On Sept. 11, 2001, when the World Trade Center towers fell, 2,871 people died, among them 24 Canadians. One of them was former NHL player Garnet (Ace) Bailey, who was on United Airlines Flight 175, which hit the South Tower. The last person out of that tower before it collapsed was believed to be Ron DiFrancesco of Hamilton, who worked on the 84th floor. When the American Airlines passenger plane hit the North Tower first, an announcement told everyone that the South Tower was secure; there was no need to evacuate.

DiFrancesco decided to leave anyway. Before he could get to the elevators, the plane carrying Ace Bailey hit the tower between the 77th and 85th floors. DiFrancesco was able to run through smoke and burning debris and finally get to the ground floor. The building then began its collapse. DiFrancesco lost consciousness and woke up three days later in a hospital.

No community was more challenged than Gander, N.L., which accepted 38 flights.

While DiFrancesco was still awaiting rescue, unconscious, a chain of events was set in motion. The Federal Aviation Administration ordered all civilian airplanes in U.S. airspace to land. Canada quickly followed suit, grounding all flights.

All American airports were closed. But there were 500 or so airplanes that were en route to the U.S. Those with enough fuel returned to their point of origin. The rest landed at Canadian airports. Flights from Asia landed in Vancouver and a few western airports. Atlantic Canada took the brunt of planes from Europe. Transport Canada steered them away from larger urban centres such as Toronto, Ottawa and Montreal, fearful that some of the planes could be used in the same manner as the planes hijacked by terrorists.

Within a few hours, more than 200 planes landed in Canada, carrying more than 33,000 people, according to Transport Canada. Halifax had the most planes with 47, while Vancouver had the most passengers with 8,500. The logistics of feeding and temporarily housing all these people presented a challenge. But no community was more challenged than Gander, N.L., which accepted 38 flights containing more than 6,500 people. The population of Gander was 10,000.

The people were put up in school gyms, churches, community centres and homes. Citizens donated clothes and bedding, and pharmacies filled prescriptions for free. The school bus drivers, who were on strike, laid down their pickets and ferried people where they needed to go.

A group of people flying home from Gander after six days decided to repay that hospitality by setting up a scholarship fund for local students. By 2014, it had reached $1.4 million. Another uplifting result was the hit musical Come from Away, which dramatized the Gander experience. Its Broadway debut was in 2017 and it became the longest running Canadian play on the Great White Way, and was nominated for seven Tony Awards. It has since played around the world to sold-out audiences, reminding them of the generosity of the human spirit.