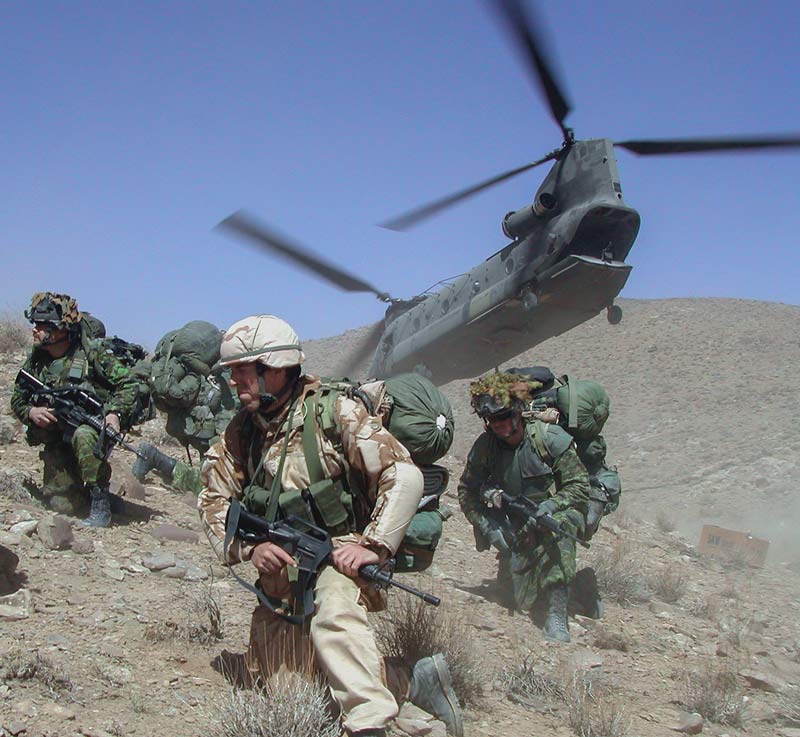 The 3PPCLI Battle Group launches Canada’s first combat assault since the Korean War on a mountain called the Whale’s Back, overlooking a valley near the Pakistan border. The soldier in the foreground is a Canadian sniper in specially designed British combat fatigues. Taliban and al-Qaida fighters attempting to escape into the mountains to the east came under heavy bombardment from American B-52s and F-16s. Scaling elevations up to 2,650 metres, 500 Canadians, along with U.S. Navy Seals and infantry from the U.S. 10th Mountain Division, spent five days clearing caves and gathering intelligence among the rocks and crevices. 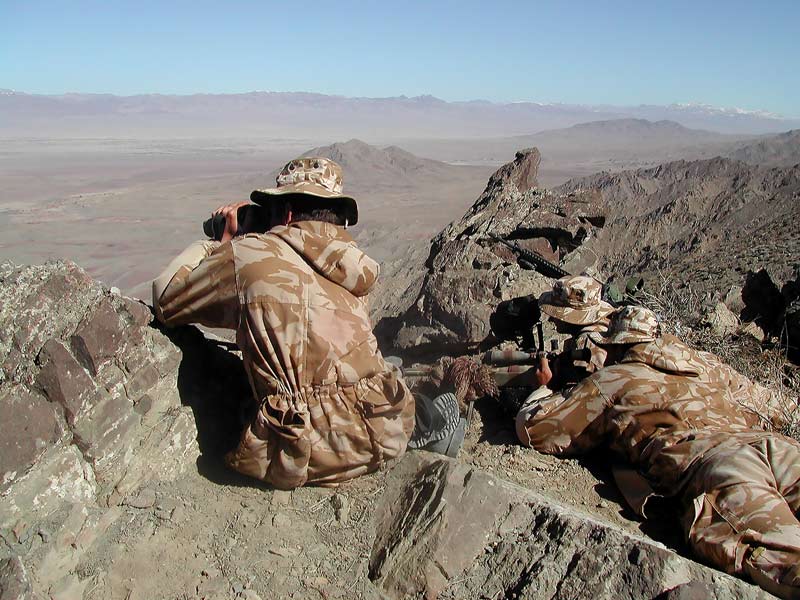 Canadian snipers set two distance records while on operations with American forces in March 2002. Here, a sniper team looks west from high atop a mountain, watching the backs of Canadian troops working along the ridge behind them. Two Canadian sniper teams earned U.S. Bronze Star Medals for their deadly effectiveness and courageous work over a month of intense fighting between U.S. airborne troops and enemy forces. 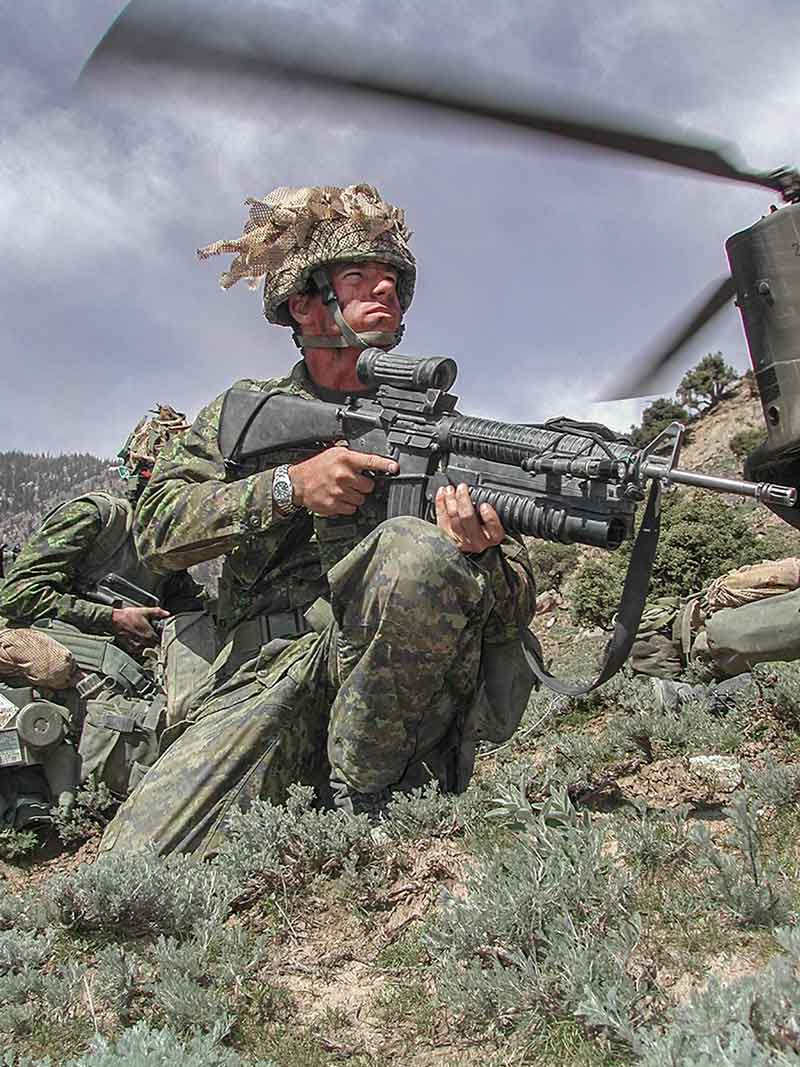 A member of the 3PPCLI Battle Group lands in the embattled region of Tora Bora, just metres from the spot where Osama bin Laden was last confirmed alive by Westerners before he was killed by a U.S. Navy Seal team in May 2011. Canadian infantry and combat engineers were dispatched to investigate reports of an extensive cave complex next to the spot where bin Laden was believed to have been wounded. Some two dozen of his special guard were killed in a B-52 strike and intelligence officials suspected bin Laden could have been among them. The Canadians uncovered their graves at a nearby village and determined bin Laden was not among them. 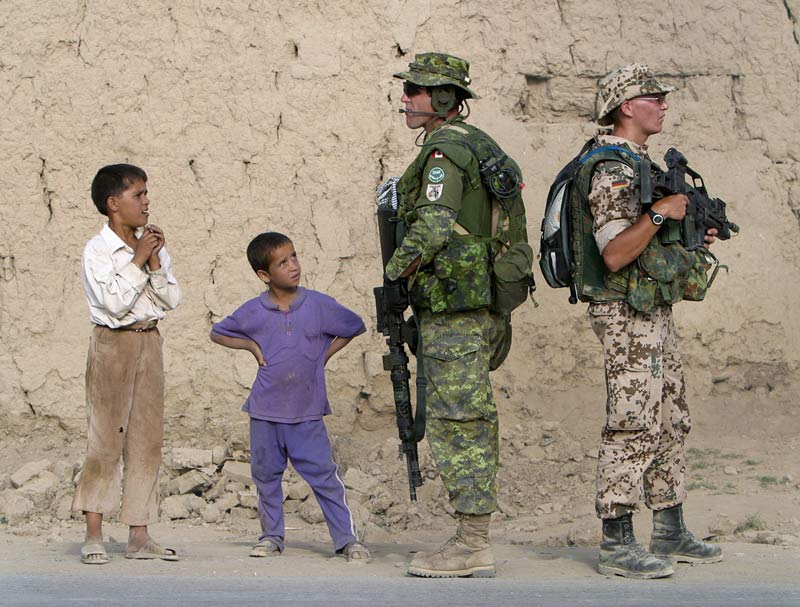 Members of the 3RCR Battle Group conduct a familiarization patrol with the outgoing Germans. The Royal Canadian Regiment took over an area many times the size of that covered by their predecessors. It incorporated urban areas, deserts and mountains. The first patrol covered 16 kilometres on foot and in 50-degree heat. A teacher with her all-girl class at a school in Kabul. The Taliban had denied girls an education during the five years it held power between 1996 and 2001. The fate of girls and women in Afghanistan is now uncertain after the Taliban regained control of the country. Taliban leaders have promised more progressive policies within the tenets of their radical interpretation of Islam, but their history of violence and other regressive measures suggest little will change. 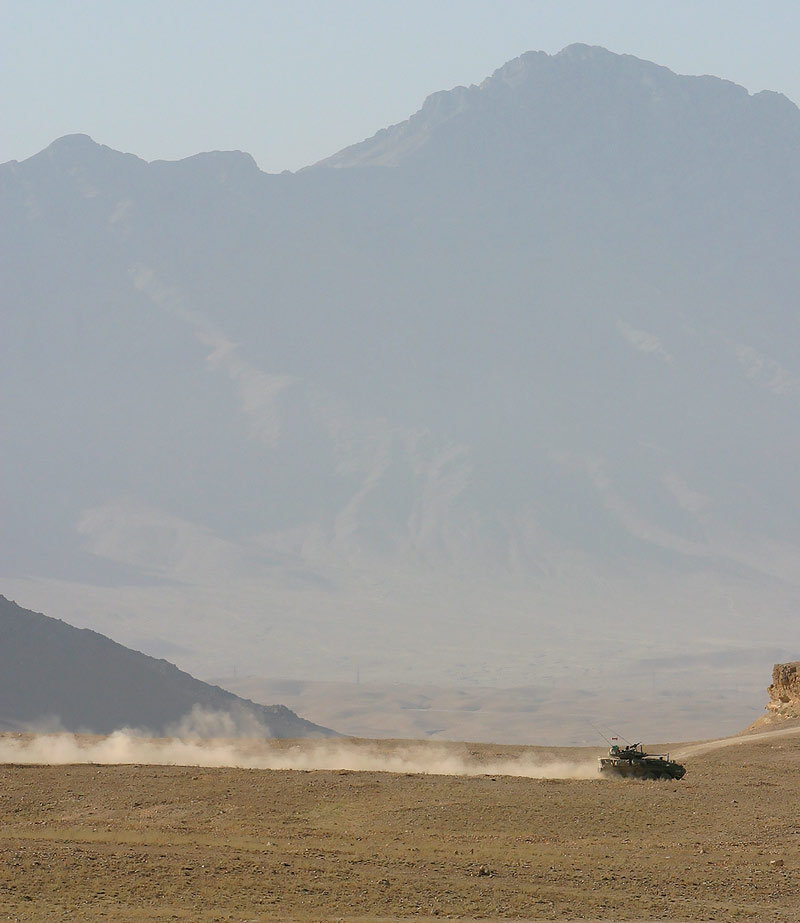 A Canadian Coyote armoured reconnaissance vehicle makes its way across parched territory north of Kabul. The Coyotes proved an invaluable tool in the Canadian arsenal throughout the war. Members of the 3RCR Battle Group take a break during a patrol outside Kabul. Many Canadian soldiers took multiple deployments after operations were moved back to Kandahar in 2006 and fighting increased. Some 40,000 Canadian troops would pass through the country before Ottawa withdrew its military support for the NATO mission in 2014. 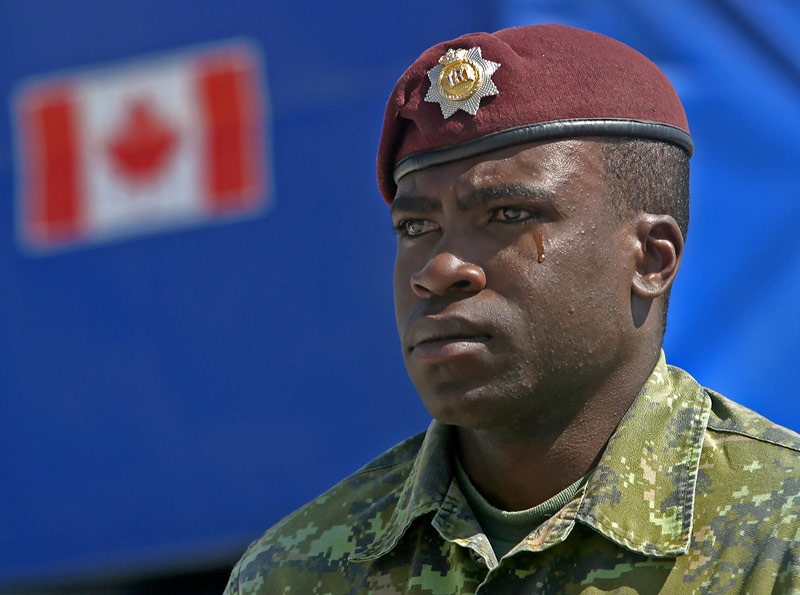 Cpl. Ricardo Taylor of 3rd Battalion, Royal Canadian Regiment, sheds a tear during a ramp ceremony for fallen comrades Sgt. Robert Short, 41, and Cpl. Robbie Beerenfenger, 29. The pair were killed two days previous when the Iltis jeep in which they were patrolling was destroyed by a stack of anti-tank mines buried in a dry creek bed south of Kabul. They were the first Canadian regulars lost to enemy action in Afghanistan. Cpl. Bryan Toope of the 3RCR Battle Group cradles a Soviet-made 122mm rocket while an Afghan woman cradles her baby in Paghman, outside Kabul. Combat engineers are taught to carry ordnance “like a baby.” Canadian soldiers seized more than 30 rockets, mortars and recoilless rifle rounds that day, part of a continuing effort to clear the country of three decades’ worth of weapons and munitions. One step forward, two steps back: The Americans are estimated to have left US$85 billion in weapons and equipment behind when they left the country in August. This Afghan worker was among about 200 former employees of a sprawling factory complex in the Kabul neighbourhood of Jangalak who had returned to try to revive what was left among the ruins. The buildings that still stood were essentially roofless and windowless, and most of the equipment had been destroyed or looted and taken out of the country. But a blast furnace remained, and the workers were making manhole covers and lead counterweights for the scales used in markets across Afghanistan. 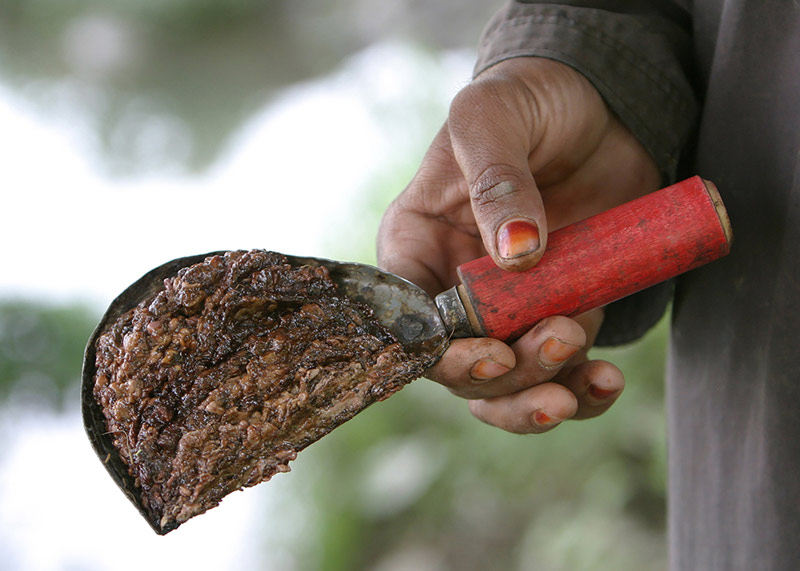 Raw opium in the trowel. The original Taliban government had banned the growing of opium poppies in 2000. That’s until al-Qaida convinced the Taliban leadership otherwise. Profits from poppy sales helped fund al-Qaida’s terrorist activities. The farmers who grow poppies, like this one near Jalalabad, can’t be blamed. An acre of poppies yielded 26 times the profit of an alternative acre of wheat at the time. Reuters reported on Aug. 16 that the United States spent more than US$8 billion over 15 years on efforts to deprive the Taliban of profits from Afghanistan’s opium and heroin trade. It employed ineffectual—and corrupt—poppy eradication programs, airstrikes and raids on suspected labs. Nothing worked. The United Nations Office on Drugs and Crime estimates Afghanistan is responsible for more than 80 per cent of global opium and heroin supplies. A member of the 3R22R Battle Group leads a patrol through the streets of an Afghan village. The Canadian way—tolerant, engaging, measured—generally stood in stark contrast to that of some other coalition partners. The Maple Leaf was a readily identifiable symbol that carried relatively little baggage with it. 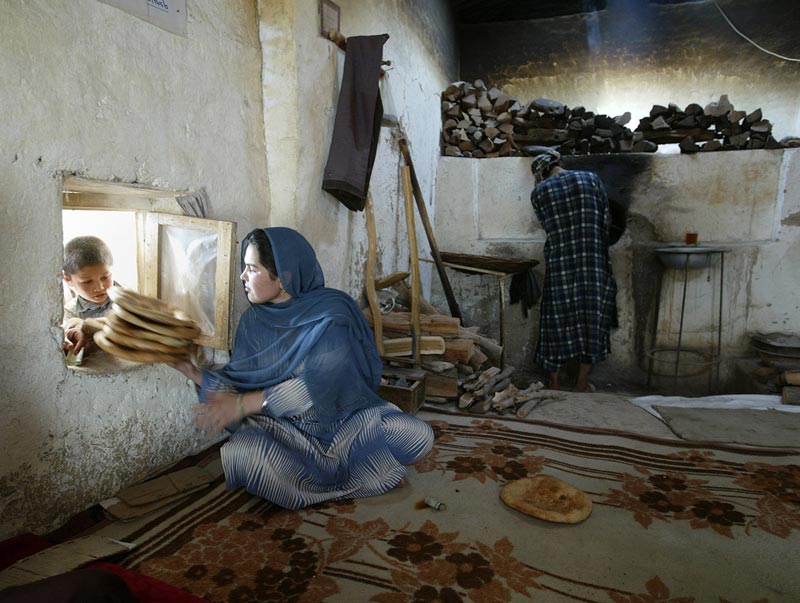 Dozens of World Food Programme bakeries were in operation around the country, and multiplying. Many were staffed by war widows, providing subsidized naan bread to impoverished communities. The WFP said on Aug. 25 that one in three Afghans—14 million people, including some two million children—are now going hungry. A mother clutches her sick child in an ill-equipped hospital in Kabul. The future of Afghanistan under Taliban rule remains uncertain.

PrevPrevious ArticleThe ducks of war
Next ArticleChoose our cover for the next issue of Canada’s Ultimate Story!Next