Home » Military History » At the liberation of Dieppe

At the liberation of Dieppe 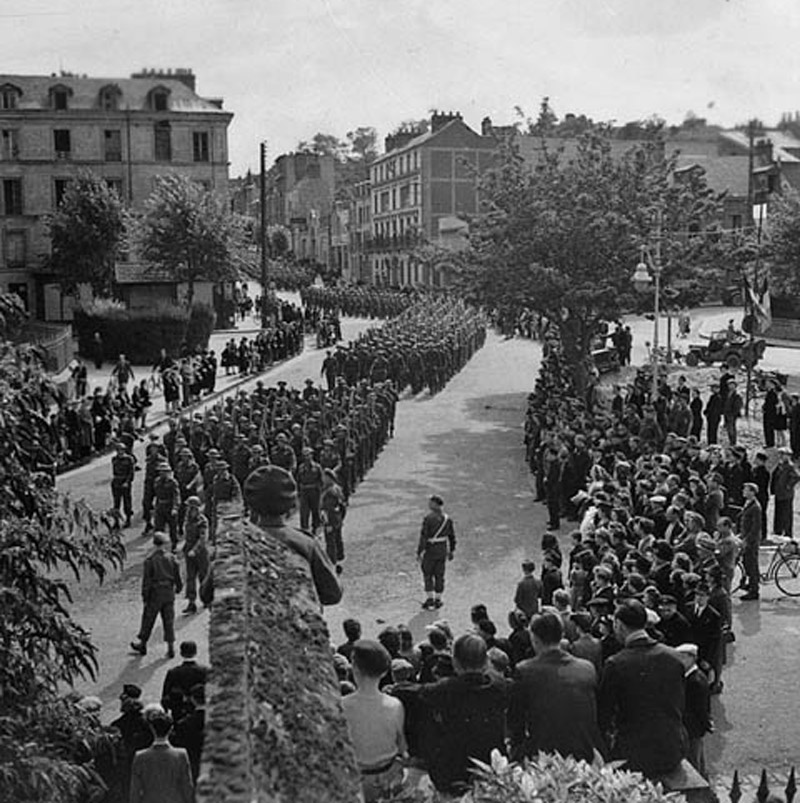 Canadian soldiers marching through liberated Dieppe, Sept. 1, 1944.
LAC/PA-131233
On Sept. 1, 1944, the 2nd Canadian Division returned to Dieppe, France, to a very different reception from that of just two years before.

It was only fitting that the 2nd Canadian Division should be chosen to liberate the town as the Allies swept through northern France following D-Day.

Aircraft were deployed to soften up enemy defenders when a reconnaissance unit reported the Germans had already evacuated.

The air attack was called off with 20 minutes to spare. Instead of the expected greeting of gunfire, the Canadians were welcomed by cheering French citizens celebrating their liberation and effusive with gratitude. 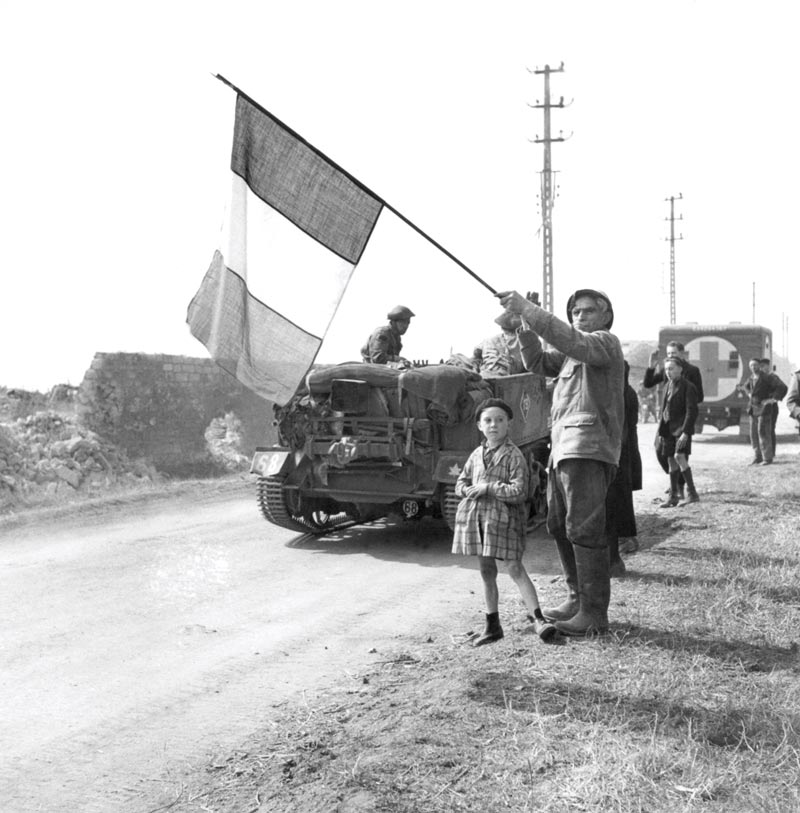 A French veteran greets Canadian vehicles, July 1944.
LAC/PA-131386
Here is the account of CBC correspondent Matthew Halton, as reported in a radio broadcast:

“When they came here the first time, Aug. 19, 1942, to test the defences, they were received with more opposition than they expected…the attack went badly and they left about 3,500 of their number behind. This time the division roared up from Rouen to Dieppe along 35 miles [56 kilometres] of road lined with cheering people and they took the town without firing a shot.

It was a gesture demanded by Canadian history.

“The Germans had left the previous day. A few snipers had stayed behind but these were attended to by the FFI [French Forces of the Interior resistance fighters] in Dieppe. The first Canadians to enter Dieppe were divisional reconnaissance units who were received with unforgettable acclaim. 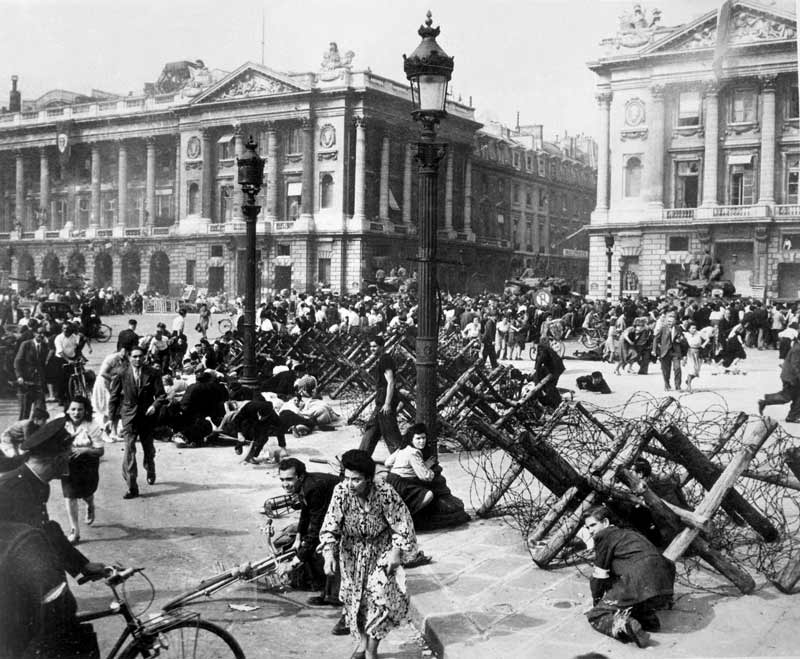 As allied troops enter Paris on Aug. 26, celebrating crowds in Place de la Concorde scatter for cover from small bands of remaining German snipers.
Wikimedia
“When I reached the outskirts of the town, I found a soldier painting French and Canadian flags on a signboard which bore the words ‘This is Dieppe.’ Lined up nearby were key regiments waiting for the word to go in. They were the Essex Scottish, Royal Hamilton Light Infantry and the Royal Regiment of Canada. Not behind were three other regiments that fought in Dieppe in 1942, the Fusiliers Mont-Royal, of Montreal, the Camerons (Highlanders) of Ottawa and the South Saskatchewan Regiment.

“I drove into town with a colleague. We saw one very happy Canadian grinning from ear to ear, his scout car decorated with flowers. It was (journalist) Ross Munro of The Canadian Press. He had been here before (covering the raid in 1942).

“We made our way with difficulty through a storm of flowers and shook hands hundreds of times before we got to the town hall. We visited the mayor who was one of the leaders of the Maquis [French Resistance]. He received us as if we were plenipotentiaries extraordinary. And made an eloquent and moving speech…among those who acclaimed us there were relatives of people killed in the fighting in 1942. 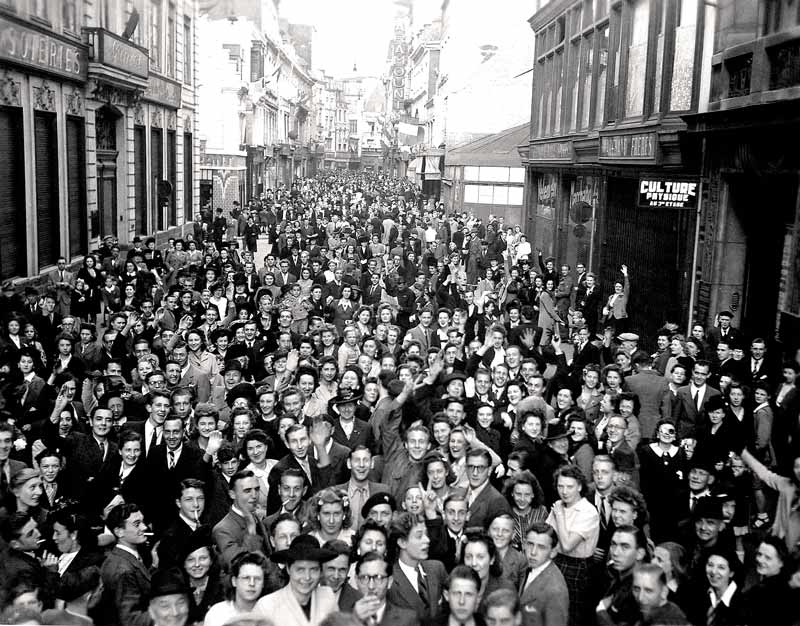 French citizens fill the streets of Lille following the liberation of France.
ALEX GRAY, TESTAMENTS Of HONOUR
“We left the mairie [town hall] and drove to the Canadian cemetery at the end of a pleasant wood just outside Dieppe, looking toward England. There lie our dead of two years ago, 850 of them in 11 neat rows of graves. On each simple wooden cross is a number, each number corresponding to a name on the list in the little wooden lodge nearby. There are well-kept lawns between the rows of graves, but the Germans never allowed the French to lay flowers or even come near.

“At the cemetery I met a medical officer, Major R.G. Alexander of Calgary, who won the MC [Military Cross] at Dieppe in 1942. And there was the padre of the Essex Scottish, M.J. Dalton of Windsor. He said ‘I wasn’t at Dieppe; I was ill just then and couldn’t go. I shall never, never forget those long hours when we waited for the regiment to come back. The cook had prepared a special dinner in the officers’ mess. We waited and waited until midnight. But of the 44 officers of the Essex Scottish, not one came back.

“Less than 300 of the men who fought at Dieppe returned to France this time with the 2nd Division [but many] were not here yesterday to stare at their historic battlefield. They had laid down their lives on the road from Caen to Falaise. 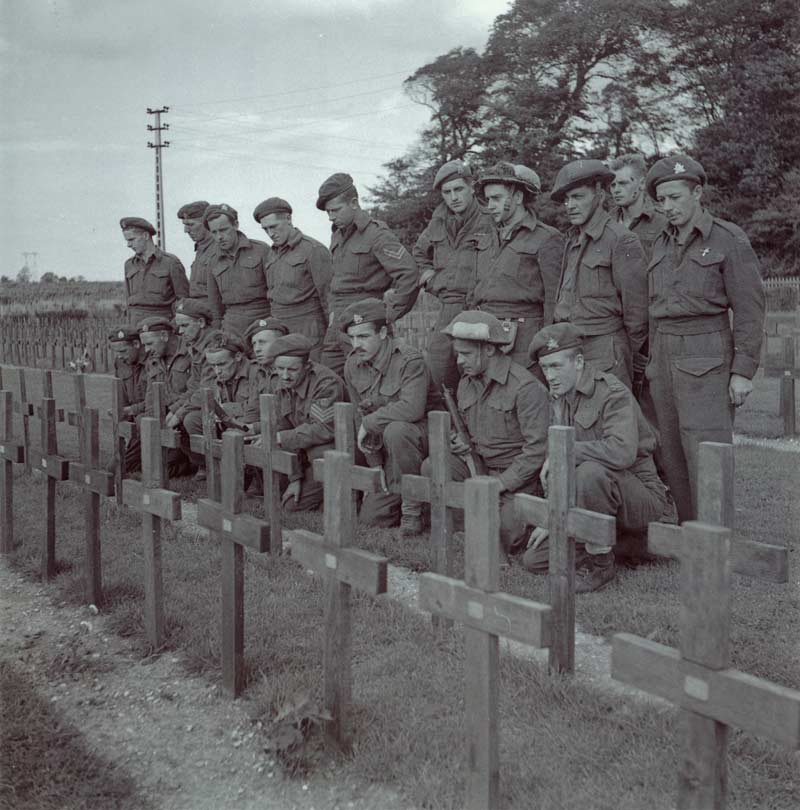 Major J.M. Figott and members of his company of the Royal Hamilton Light Infantry kneel at the graves of Canadian soldiers killed in the Dieppe Raid.
LAC/PA-176696
“A Frenchman we met said the last word on Dieppe. After the raid, he said, scores and scores of German generals and experts came here to gloat over the victory and study the lesson. ‘They slapped their fat thighs and said the defences of Europe are good. But it was you who learned the lesson. Our dear friends in the cemetery did not die in vain.’”

The radio broadcast is available in the CBC archives here.