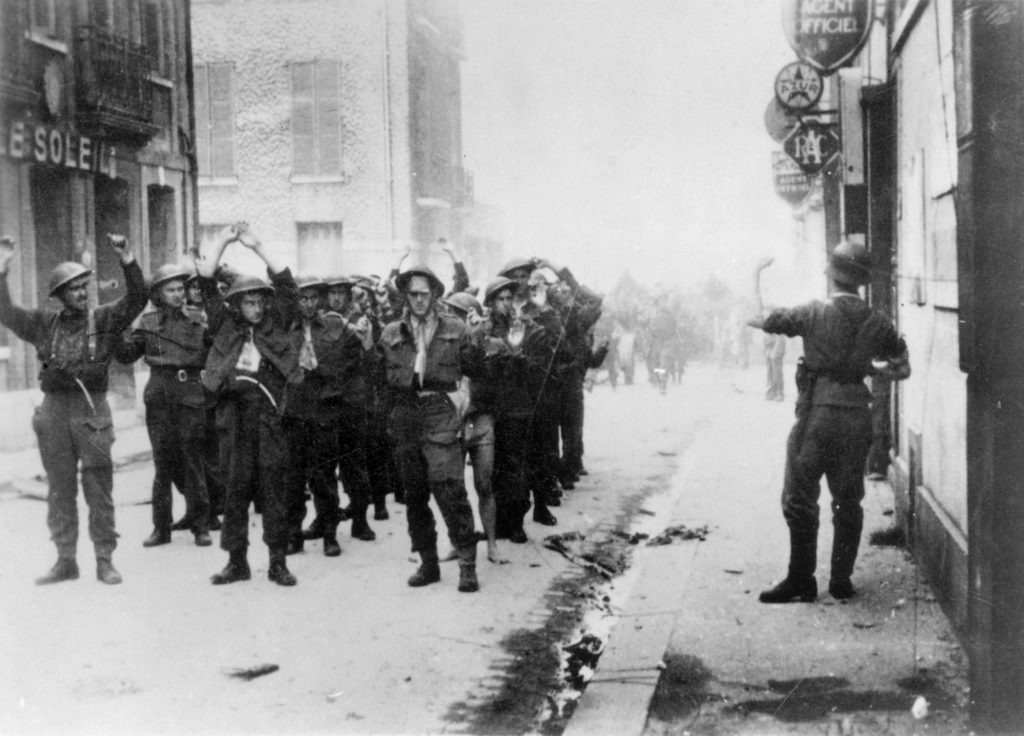 A German soldier directs Canadian prisoners of war through Dieppe after the disastrous raid.
Wikimedia
In June 1942, Canadian troops arrived for six weeks of combined operations training on the Isle of Wight in England in preparation for the raid on Dieppe, France.

Among them were a dozen men from the Royal Canadian Ordnance Corps, who were to deliver ammunition, help with the wounded, and transport German prisoners to ships waiting offshore.

“In early June the division moved to the Isle of Wight for training, especially for sea-borne landings,” Staff Sergeant R.E. Crumb wrote in his diary, extracts of which were printed in Canada’s Craftsmen at 50! The Story of Electrical & Mechanical Engineering in the Canadian Forces by Colonel Murray C. Johnston.

They could hear the fighting before they arrived.

“About a dozen of us from the Ordnance workshop practiced landing with jeeps, loaded with ammo, to be dumped at a pre-arranged rendezvous and then return to our TLC [Tank Landing Craft] with wounded.

“We spent about two weeks loading Bren magazines and other preparations for the upcoming raid. The Engineers made up Bangalore torpedoes and other explosive charges.” Then on Aug. 18, “our officer, Major F.E. Bell, told us, ‘This looks like the real thing. I wish I was going with you.’” 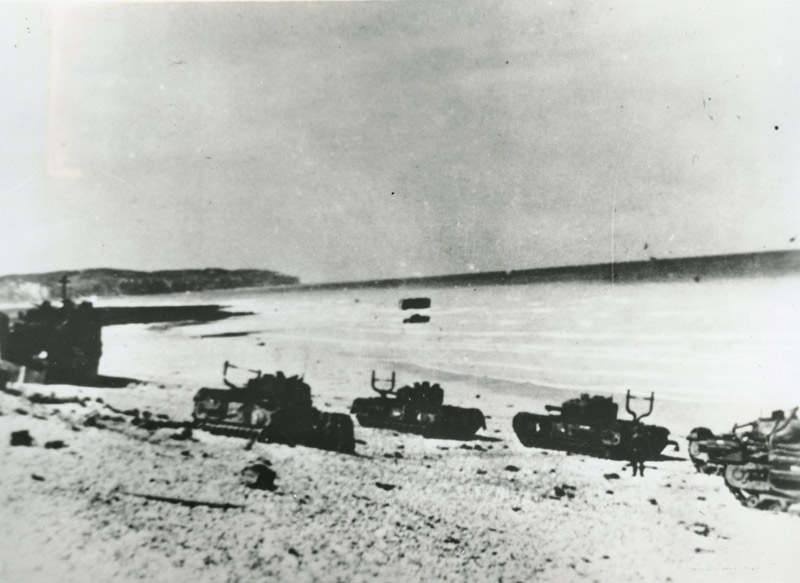 Canadians made up 4,963 of the 6,100 troops on the Dieppe raid. Troops were supported by eight Allied destroyers and 74 air squadrons, including eight of the Royal Canadian Air Force.

At dusk, Crumb’s group moved out, boarding a TLC at Newhaven. “It carried three Churchill tanks, but we had no jeeps.” He hadn’t trained with these men, so he briefed the newbies on what to expect. “I do not remember getting much sleep that night.”

They could hear the fighting before they arrived.

“Long before our landing craft touched the beach, we could hear firing. We were on the second wave. It was 6 a.m. and full daylight when we landed.” A shell knocked out the bridge of the craft, wounding the captain, another hit the engine room, a third set the magazine on fire. “There was more danger from shells exploding from the magazine than from enemy fire,” Crumb wrote.

“I heard Claude Norman holler to me to give him a hand with a stretcher. I jumped up and gave him a hand and we took a wounded man off the burning TLC and set him under the ramp for protection. Then we went back for more.”

But now Crumb was stranded with other men on the beach.

German machine guns were mounted atop Dieppe’s rooftops and the high cliffs surrounding the town. Every man on the beach could be clearly seen from above. They were easy targets.

But they were not going to give up without a fight. 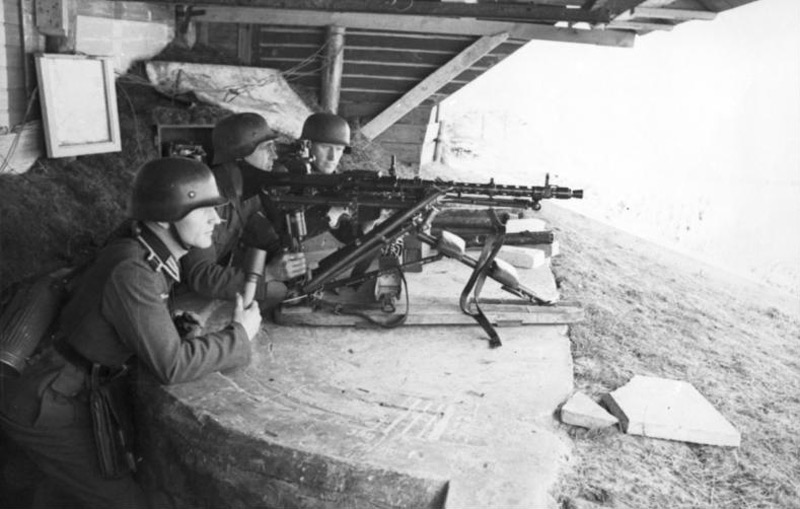 An MG34 machine-gun emplacement. The MG34 made it possible for crews to lay down a non-stop barrage of fire.
Wikimedia
“I took my rifle and stood up in the front of the TLC by the side wall and fired at a hut up on the cliff. Claude Norman lay under the ramp and fired at a German sniper who was in the top of the Casino. We got word to one of the tanks. It fired an armour-piercing shell at the wall by the Casino window. No more sniping.

“An R-Boat [assault craft] came in to evacuate the wounded, so we began loading. It soon was so full of men that it grounded but the rising tide helped us to free it. As it pulled away from shore, it was straddled by machine gun fire. I’m not sure if anyone was hit.”

But now Crumb was stranded with other men on the beach.

“From the moment of capture, your first thought is to try to escape.”

“A soldier waved a white flag, then slowly stood up, holding the flag up. In a few minutes, some German soldiers appeared, and slowly we all started up the beach. Claude Norman and I picked up an engineer friend who was wounded in the knee and we helped him up the beach and into town. For us the raid was over.”

But the war was not. 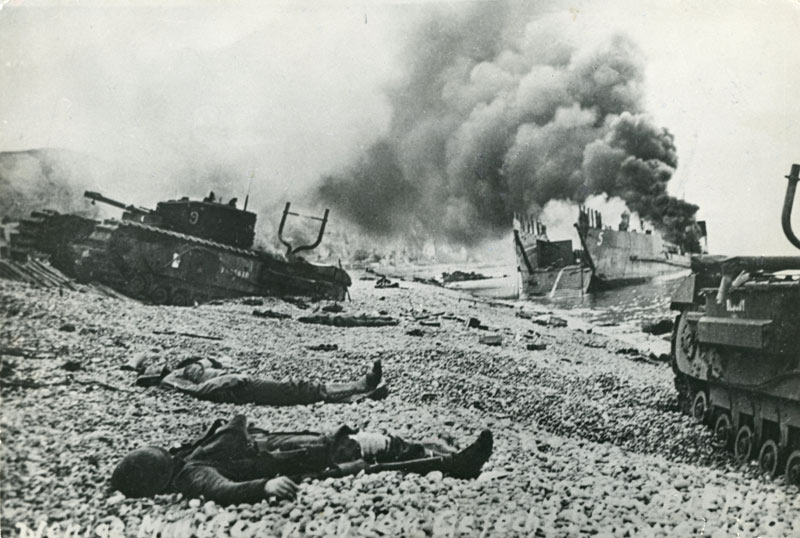 Bodies of Canadian soldiers lie on the beach at Dieppe among damaged landing craft and Churchill tanks of the Calgary Regiment following Operation Jubilee on Aug. 19, 1942.
LAC/C-014160
In nine hours, 907 Canadians had been killed and 2,460 wounded. Crumb was among the 1,946 taken prisoner.

The Germans transported the seriously wounded to local hospitals, and the rest were boarded onto cattle cars for horrific trips to German prisoner-of-war camps in Molsdorf, Mülhausen, Eichstät and Lamsdorf (now Lambinowice, Poland).

“From the moment of capture, your first thought is to try to escape,” Crumb wrote. “The thought possesses you day and night. You examine every possibility. Prison camp life taught me how vital discipline was to survival. Even when the water froze in the huts in winter, I would go out in the morning and wash my face in the snow, comb my hair and straighten up my clothes. We had to stay above our circumstances.”

Nearly 9,000 Canadian troops and several hundred civilians spent time in German and Japanese PoW camps. Many were abused, some were brutalized and all went hungry. Many tried to escape, and dozens were killed in the attempt. Six Canadians were among the prisoners executed by the Nazis after a 1944 attempt known as the Great Escape. (“Abused Prisoners and Great Escapes” May/June 2018). 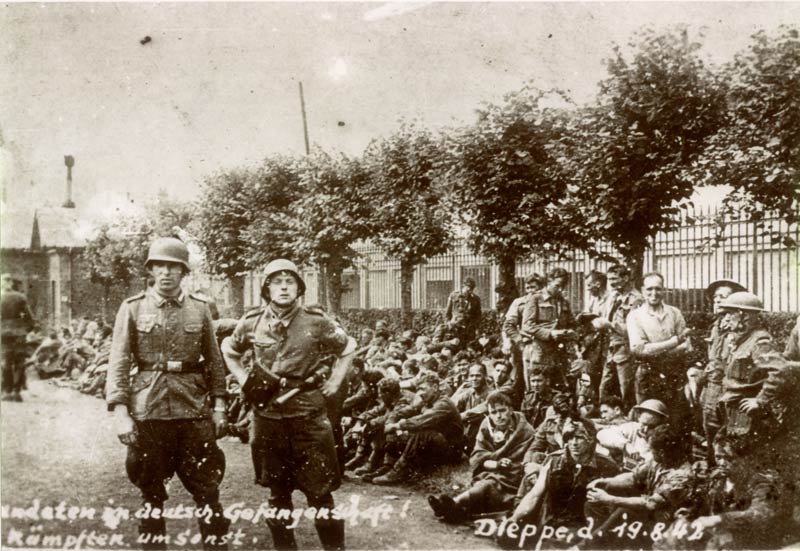 Prisoners of war in German custody outside of the Dieppe hospital, Aug. 19, 1942.
Legion Magazine Archives
On his fifth escape attempt, Crumb walked through the city of Dresden 10 days after the devastating Allied bombing in February 1945.

“It took us six hours to walk from the outskirts to the city centre. The city still burning, houses collapsing into the streets, dead still laying about. German soldiers were watching for looters. It was scary, if the people knew who we were, we imagined being lynched. But nobody paid any attention to us, everyone seemed to be wrapped up in their own misery.”

Crumb was recaptured, but was finally successful in April, just weeks before the end of the war. He escaped as Russians were approaching, managed to commandeer a jeep from a German officer and make his way to American lines. He was back in England at the end of June.

It was “a glorious sight. We sailed out of the fog into bright sunlight, there in front of us were the beautiful green hills, flanking the city of Halifax…. We just crowded the rails [of the ship] to drink in the wonderful sight. It was like all the dark years of war were truly over, and we were home to the land of the free.”

PrevPrevious ArticleDisplaced by war: Life on the edge
Next ArticleAlmost CalgaryNext