Home » Defence Today » Displaced by war: Life on the edge

Displaced by war: Life on the edge 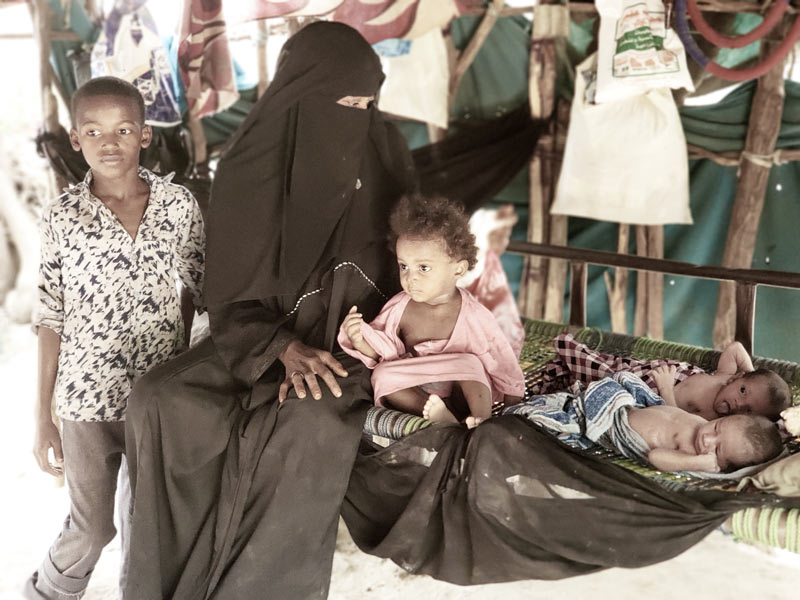 Amal with her children in the al-Zalam IDP camp in western Yemen.
Relief and Development Peer Foundation
While the world fights the coronavirus pandemic, families displaced by war in Yemen are combatting malnutrition and rampant disease, most of which has long been eradicated in the West.

Recent reports from inside the embattled country say increasing numbers of children living in displaced-persons’ camps are coming down with malaria, cholera, polio and diphtheria—and often dying.

In Bajil, a district in western Yemen bloated by uprooted civilians, 35-year-old Amal is among thousands of internally displaced persons (IDPs) struggling to support a family while a particularly brutal civil war approaches its seventh year.

More than four million Yemenis have been forced to flee their homes, making the country “home” to the fourth largest internally displaced population worldwide. 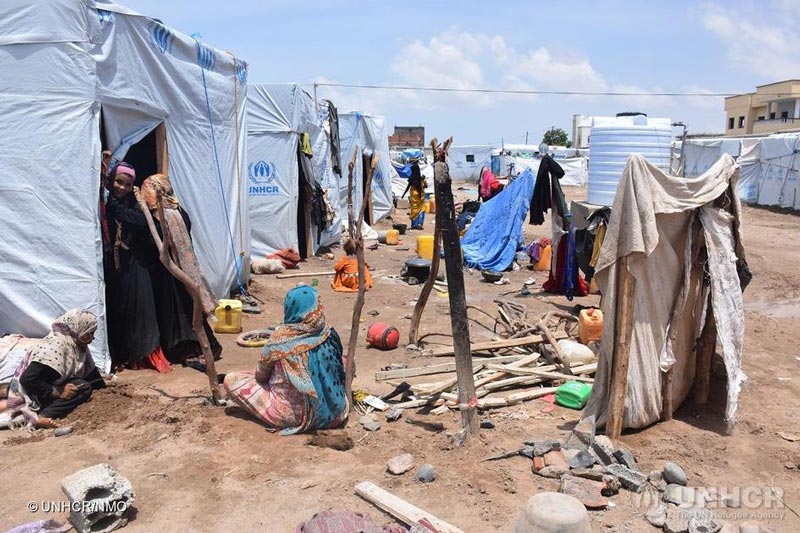 Displaced Yemenis sit inside their camp in Aden after it was hit by heavy rains in 2019.
UNHCR
Amal took refuge with about 650 others in the al-Zalam (the darkness) camp as fighting escalated between Houthi rebels and troops of the Saudi-supported government of Abdrabbuh Mansour Hadi.

The Yemen-based Relief and Development Peer Foundation, known as RDP, reports that basic necessities in al-Zalam are virtually non-existent, compounding the crisis facing Amal, her six children and their neighbours in the hot, dusty and barren encampment. Her four sons and two daughters include newborn twins.

“This is how I usually spend my day, fighting to keep my kids alive.”

“As a displaced person, I go every day to collect empty bottles of water from the streets to sell at the end of the day and get 500 Yemeni rials (C$2.51) or a little more to buy some food for my children,” she told relief workers.

“I also collect leftovers from restaurants to feed them. This is how I usually spend my day, fighting to keep my kids alive.”

Growing daily, the camp desperately lacks adequate food, clean water, shelter and sanitation, said the non-governmental organization, which declares the alleviation of suffering, preservation of human dignity and empowerment as its core missions. 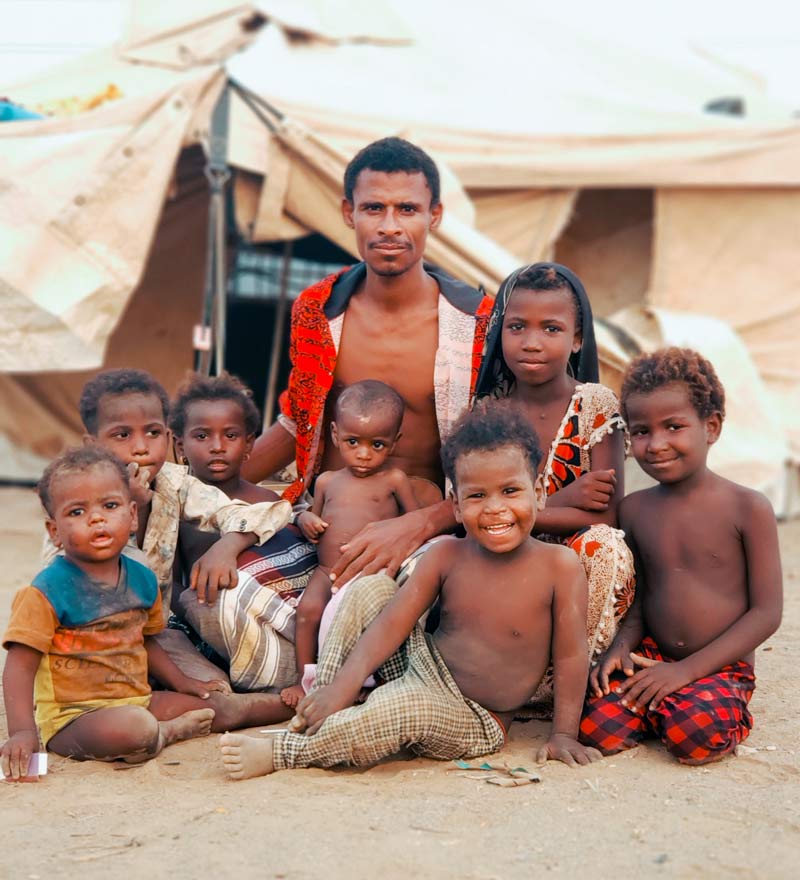 Majid Naji was forced to flee with his five sons and two daughters to the al-Zalam camp for IDPs in the Bajil district of al-Hudaydah governorate. Majid’s youngest son died two months later due to severe acute malnutrition and a fractured skull.
Relief and Development Peer Foundation

Amal’s plight, and that of tens of millions of others in Yemen and elsewhere, illustrate the continuing and expanding tragedy of war. While nations celebrate the exploits of their soldiers, ordinary citizens have been, and continue to be, the innocent victims of humankind’s prevailing inability to find another way.

The Internal Displacement Monitoring Centre, which has tracked and analyzed the forced relocations of populations since 1998, reported in May that war, violence and natural disasters forced 40.5 million people to relocate within their own countries in 2020—the most in more than a decade.

“Moving from one place to another in search of safety and security is the only way for inhabitants to survive.”

By year’s end, 55 million people were living in internal displacement, 48 million of them due to conflict and violence in 59 countries and territories.

IDPs are distinct from refugees in that, unlike refugees, they have not crossed international borders to escape whatever’s uprooted them. Their plight is often overlooked as countries struggle to address an overwhelming flood of refugees, largely from Syria, Afghanistan and other countries ravaged by prolonged war. 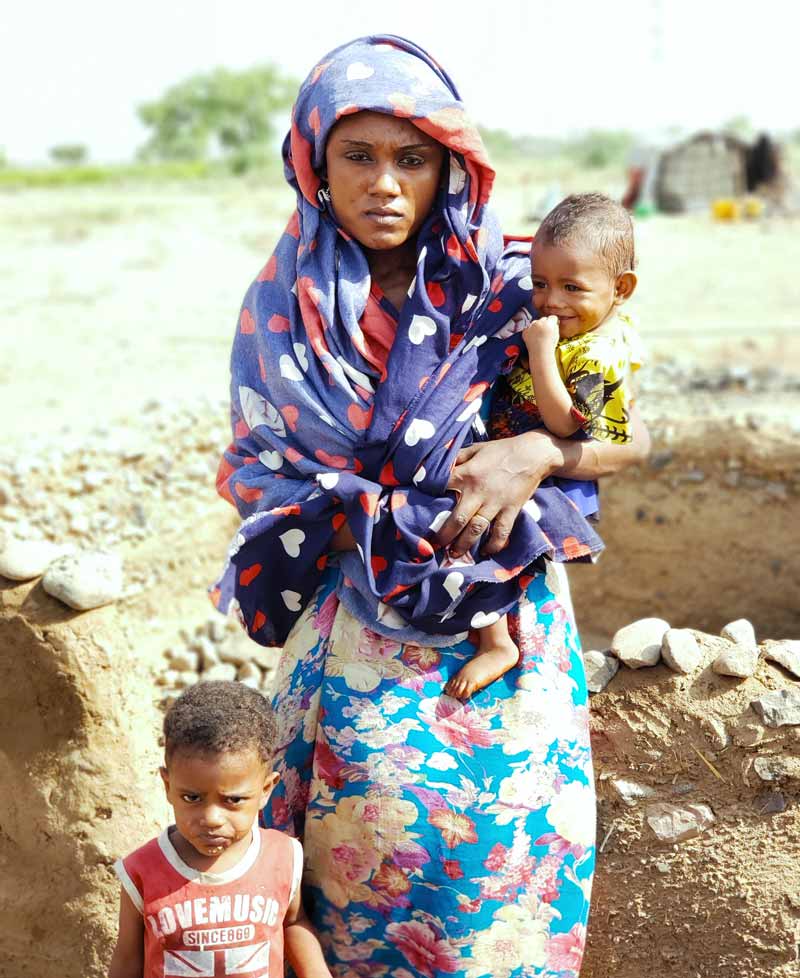 Many of the IDPs in Yemen are women and children. Adult men are often caught up in the fighting.
Relief and Development Peer Foundation
“Moving from one place to another in search of safety and security is the only way for inhabitants to survive the ravages of war and armed conflicts, leaving behind their possessions of land, homes and large numbers of livestock,” said RDP.

“They settle in huge areas of land where camps are established. There they face many difficulties in the beginning. They just realize that they have no other place to go. Their homes, families, friends, entire villages are vanished and no longer exist.”

The group said Amal’s family is among those displaced by an escalation in fighting in southern areas of al-Hudaydah governorate last January.

The civil war has been marked by indiscriminate killings, disappearances, torture, child soldiers and enforced famine—war crimes, according to a United Nations panel, which called out Canada in September for selling armoured vehicles to Saudi Arabia that were subsequently used in the Yemen conflict. 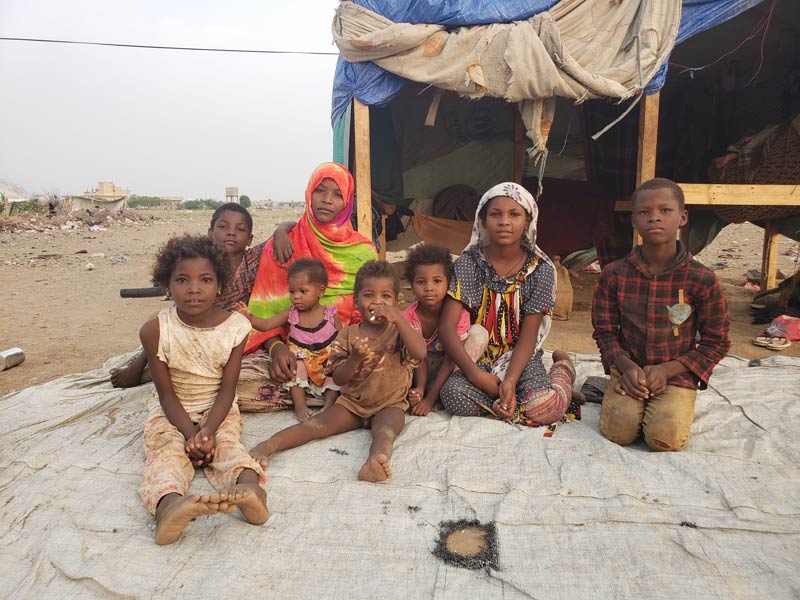 A displaced Yemeni family sitting outside of their temporary home at the IDP camp.
Relief and Development Peer Foundation
In its June situation report, RDP said that, with the help of the World Food Programme, it delivered micronutrient supplements to 18,330 children under two years old and 98,379 pregnant and lactating women in 12 districts.

It reached more than 59,000 IDPs with its awareness-raising campaign and distributed food vouchers to 630 individuals in key areas. It was distributing more than 650 tonnes of food baskets to 53,410 individuals in 7,630 of the most-affected households.

The organization’s separate supplementary feeding program had reached 277,687 IDPs. A water, sanitation and hygiene program had benefited more than 17,000.

“In Bajil, Amal’s family is a living example that depicts the human tragedy of thousands of forcibly displaced families who wanted to protect their children due to the escalating clashes,” it said in an Aug. 11 release.