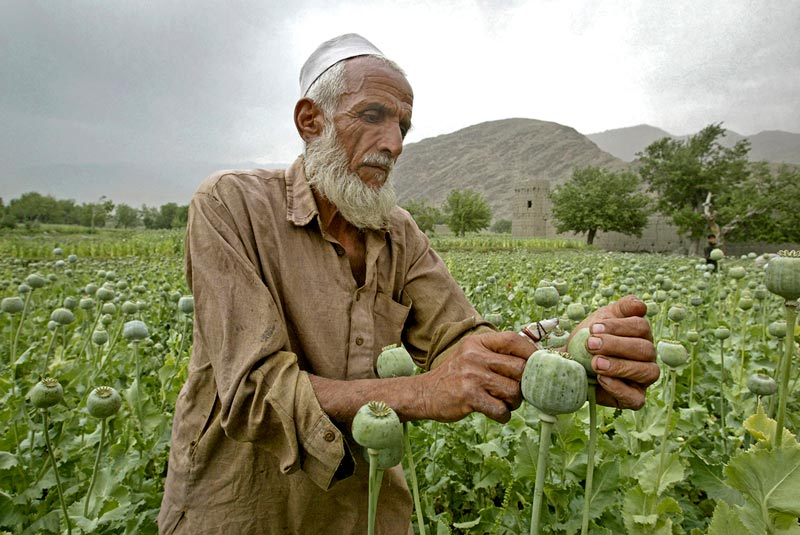 An Afghan farmer harvests opium from poppy bulbs on land near Jalalabad in 2004.
Stephen J. Thorne
America’s top military commander in Afghanistan is predicting the country, already in its sixth successive decade of unrelenting conflict, could descend into another civil war as U.S. troops end their involvement in America’s longest war.

“A civil war is certainly a path that can be visualized if this continues on the trajectory it’s on right now; that should be of concern to the world,” Miller told reporters in Kabul on June 29.

The radically fundamentalist Taliban regime came to power in 1996 after a bloody civil war that followed Soviet forces’ protracted withdrawal from the country in 1988-1989, ending what had become known as the USSR’s Vietnam.

It’s estimated that 1.5 million Afghans died during the decade-long insurgency against Soviet occupation. Thousands more were killed in the factional fighting that followed. Afghanistan emerged with its infrastructure and economy ravaged and all traces of Western culture and influence erased.

The regime also banned the once-thriving opium poppy industry, eradicating the bulk of crops. That’s until al-Qaida moved in, ingratiated itself to the regime, and established terrorist training camps inside Afghanistan’s landlocked borders. It revived the poppy industry to help finance operations like 9/11. Afghanistan has been the world’s leading producer of illicit drugs virtually ever since. 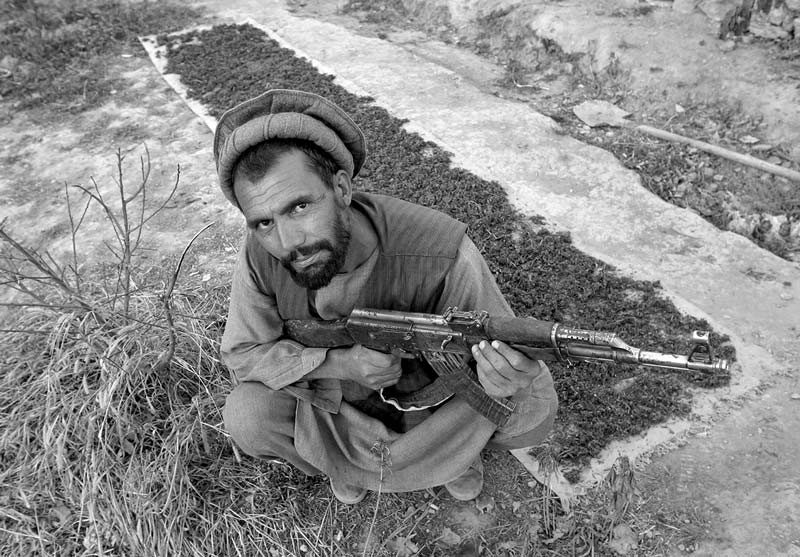 An Afghan militiaman squats next to his drying marijuana harvest at the checkpoint he manned in the mountains southwest of Kabul in 2003.
Stephen J. Thorne
Coalition and Afghan efforts to eradicate the industry lacked conviction and failed miserably. Sales of opium and poppy derivatives, mainly heroin, comprised 46 per cent of Afghan farm income in 2019, generating US $1.2 billion-$2.1 billion—many, many times the value of alternative wheat crops—according to a recent report by the United Nations Office on Drugs and Crime. 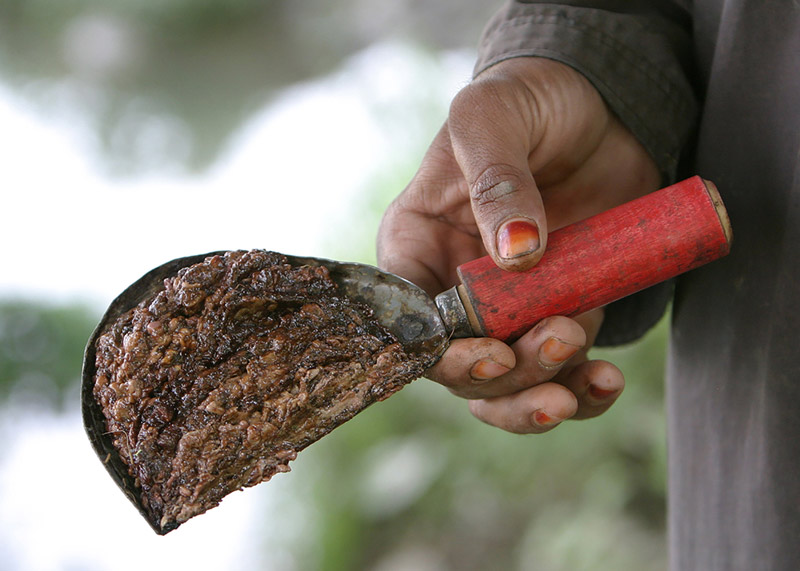 With hands and fingernails discolored by his work, an Afghan poppy harvester shows a trowel filled with raw opium.
Stephen J. Thorne
U.S. President Joe Biden announced in April that America would withdraw the last 2,500-3,500 of its troops from Afghanistan no later than Sept. 11, the 20th anniversary of the terrorist attacks that killed nearly 3,000 people on American soil, including at least 24 Canadians.

While America scaled back its involvement, Canada opted out of “the forever war” in 2014 after more than 12 years and at least 158 of its military killed.

The former Trump administration signed a peace deal with the Taliban in February 2020. It charted the U.S. withdrawal and unpublicized Taliban promises to ensure Afghanistan does not again harbour groups intent on attacking the United States.

The Taliban has accused Washington of breaking the deal to withdraw its troops by May 1. U.S. officials have said progress on Taliban commitments is unclear. 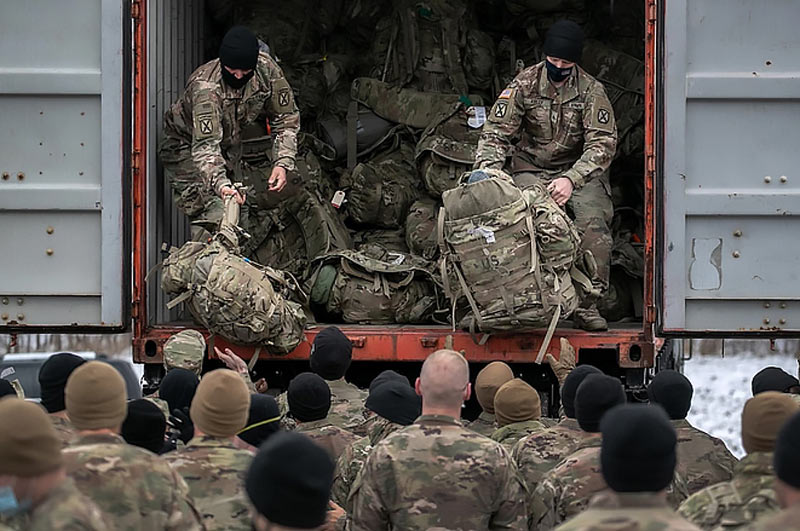 U.S. army soldiers retrieve their duffel bags at Fort Drum, N.Y., after a nine-month deployment to Afghanistan on Dec. 10, 2020.
John Moore/Getty Images
Kathy Gannon, a Canadian-born Associated Press correspondent who’s been reporting on Afghanistan for three decades, says there is ample evidence that non-Afghans are fighting alongside Afghan Taliban in spite of an agreed ban on foreign fighters in their ranks.

Meanwhile, an Afghan-based version of the Islamic State (ISIS) has emerged and made gains in some remote areas.

Pentagon leaders acknowledged in mid-June that an extremist group like al-Qaida could regenerate in Afghanistan and pose a threat to the continental United States within two years of the American military’s withdrawal, categorizing the likelihood as “medium.”

“Taliban fighters have been overrunning districts in rapid succession.”

Miller said last week that he has the weapons and capability to help Afghanistan’s national defence and security forces—for now.

“What I don’t want to do is speculate what that [support] looks like in the future,” he said.

“Meanwhile, Taliban fighters have been overrunning districts in rapid succession, many of them in the north of the country, which is dominated by Afghanistan’s minorities,” reported Gannon, a Timmins, Ont., native who was wounded in a 2014 attack by an Afghan police officer that killed her colleague, AP photographer Anja Niedringhaus.

“Several of the districts are on key roads and one is on the border with … Tajikistan. The Taliban has issued statements saying hundreds of Afghan security forces have surrendered, most of them going to their homes after being recorded on video receiving transportation money from the Taliban.”

There were more than 130,000 coalition troops from 50 NATO nations and partner countries in Afghanistan at the war’s peak.

Most American military equipment, along with the bulk of the fighting force, has already been removed. Technically, U.S. ground forces haven’t fought a battle in Afghanistan since 2014, though the casualties have continued to mount. 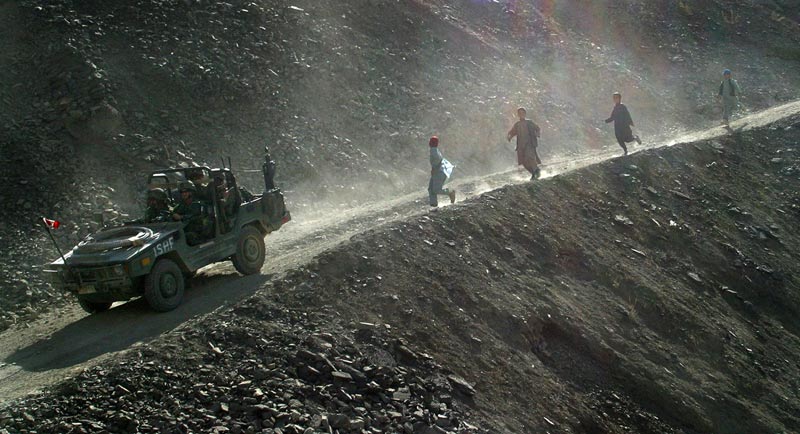 Afghan children chase Canadian troops in an Iltis jeep near Kabul in October 2003.
Stephen J. Thorne
More than 2,300 U.S. military personnel have been killed in Afghanistan and another 20,000+ wounded. The Pentagon has said U.S. military operations in the country have cost US $824.9 billion. Canada spent an estimated CDN $18 billion on fighting and reconstruction.

While the balance of U.S. troops could soon be out, AP reports that U.S. Central Command will have authority until September to defend Afghan forces via airstrikes. An unusually large American security force of at least 650 troops will remain at the U.S. Embassy compound and will back up Turkey as its troops continue providing security at Kabul’s airport.

Biden has also authorized evacuation to the U.S. of tens of thousands of Afghan citizens at particular risk of Taliban reprisals, including remaining interpreters who have worked for coalition forces. All are said to be eligible for special immigrant visas.

Afghanistan is an ancient warrior society and warlords with well-armed militias have traditionally controlled large swaths of the country. Under agreements with coalition forces, some militias disbanded after the Taliban fled to remote refuges in bordering Pakistan, from which they conducted an ongoing insurgency. Other militias helped Afghanistan’s much-maligned security forces continue the fight.

Miller said multiple districts have collapsed for a variety of reasons, including troop fatigue and surrender, psychological defeat and military defeat.

Afghan defence forces must consolidate their strengths, and establish strategic areas and protect them, he said. Provincial capitals are at risk any time the Taliban can sever transportation and communication links.

PrevPrevious ArticleUN warns of a “global refugee crisis,” urges peace and stability
Next ArticleOut of touchNext