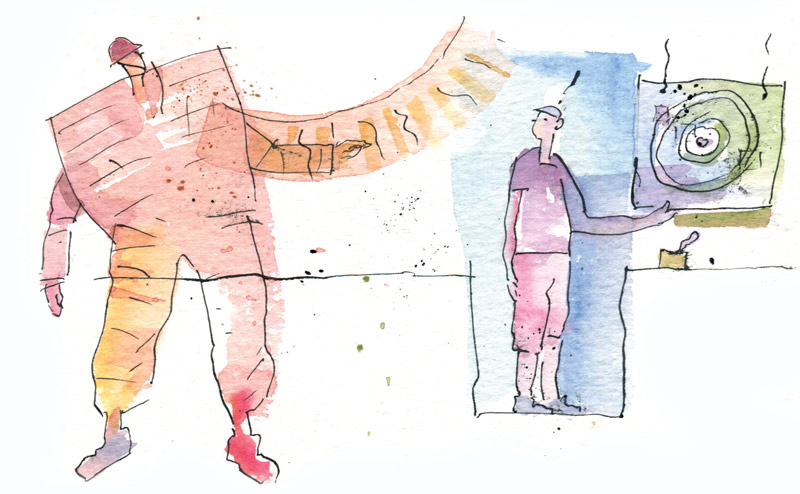 Back in the 1960s, the Connaught Ranges just outside Ottawa used to hire high school students to pull targets during various rifle competitions, including a number of military meets. I worked there one summer.

Every morning, we would trudge down range and descend into one of two sets of trenches with targets, one at 600 yards and a second at 1,000.

We would hoist the targets on a pulley system and watch for a bullet hole to appear. When it did, the drill was to pull the target down, stick a red cardboard square on a peg into the hole (showing the shooter where he hit) and patch any previous hole with a bit of paper and paste.

It was hot work, down in a concrete trench in the summer sun, but not especially strenuous. But it could get exciting at times. Occasionally a round would hit the metal target frame and ricochet down into the trench. There were dozens of chunks gouged out of the trench walls from years of ricochets.

We thought little of it until one day a party of military officers came down to see how things worked. They were decked out in flak vests and steel helmets. We were in jeans and T-shirts. I figured the visiting officers must have felt foolish in their helmets and vests among the unprotected teenagers. Afterwards, we wondered if things were more dangerous than we thought.

A retired officer recalls a patrol in Korea that involved a firefight. He and another soldier were wounded, but they took five prisoners.

“At the end of the battle that night, I said in effect to my radio operator, ‘Tell headquarters that we are finished and we are on the way back.’

“Unbelievably to my way of thinking, I got an order through him, ‘Go and do the next hill.’

“I said, ‘Tell that stupid son of a bitch we’ve got five prisoners, only two wounded. We are on the way back. This is crazy. F— off.’”

The radioman passed on the message verbatim, including the last two words. Headquarters was a suitably outraged by this breach of radio discipline.

A former air force intelligence specialist remembers the problems she encountered when she wanted to fly in the back seat of a CF-18.

“They told me I couldn’t fly in a high-performance jet aircraft, because ‘my female parts would be damaged.’”

She flew more than 80 hours in fighters. And a few years after her first flights, women were in the front seat of the CF-18.

Nicholaas de Vries of Clementsport, N.S., tells us that in 1953, a Canadian general touring Europe was much taken with the military bands he encountered and thought it would be great if every Canadian regiment had a band of its own.

He soon found, however, there weren’t a lot of musicians in Canada itching to join up.

The solution? Recruit in Europe.

De Vries was living in the Netherlands when this scheme was hatched and he found himself a member of the Black Watch of Canada.

“I never imagined wearing a kilt,” he writes. “I became Scottish, Dutch and Canadian all in one whoop.”

Sadly, the plan failed to round up enough recruits to fulfill the general’s dream.

Allan Gravelle of Bells Corners, Ont., was with the Royal Canadian Air Force in Germany in the 1950s. One day a Canadian Sabre jet crashed not far from base after the pilot ejected safely. Gravelle was given an unloaded rifle and dispatched to guard the scattered wreckage.

Soon, a local fire engine drove up with six volunteer firemen aboard. It paused briefly and left and Gravelle thought little of it. But it came back again a while later with six more fellows. And then it made a third trip.

“It was obvious the fire engine was being used as a sightseeing tour bus.”

Shortly after, a stern-faced German mother marched up, accompanied by a worried young boy. She barked at the lad and he dug his hands into his pockets, which were filled with live, .50-calibre rounds from the jet. He filled Gravelle’s hands with cartridges.

Murray Edwards joined the Canadian army early in the Second World War and was in Britain training near Aldershot when he was tabbed to go to an officer selection centre.

“I reported there and we had 10 days going through the selection process. The very first interview was by a psychologist and the word went out very quickly that he was going to ask you a question on sex and if you were embarrassed, you would fail. Most of us in those days couldn’t spell the word.”

“Prop wash? I thought it was something that they cleaned the propellers with.”

Laurie Drain of Fredericton was in the women’s division of the RCAF in 1943. She found that air force pranks can be pulled on men or women.

“I was a very keen airwoman. And when I was sent out to Victoria…they sent me to look for some ‘prop wash.’ Well, do you know what that is, prop wash? I thought it was something that they cleaned the propellers with.”

Prop wash is the wind generated by a spinning propeller.

“I spent a whole day running from pillar to post, trying to find this prop wash. Oh dear. What a thing to remember, but I was so humiliated when I learned what it was. And stupid. Because I should have known.”