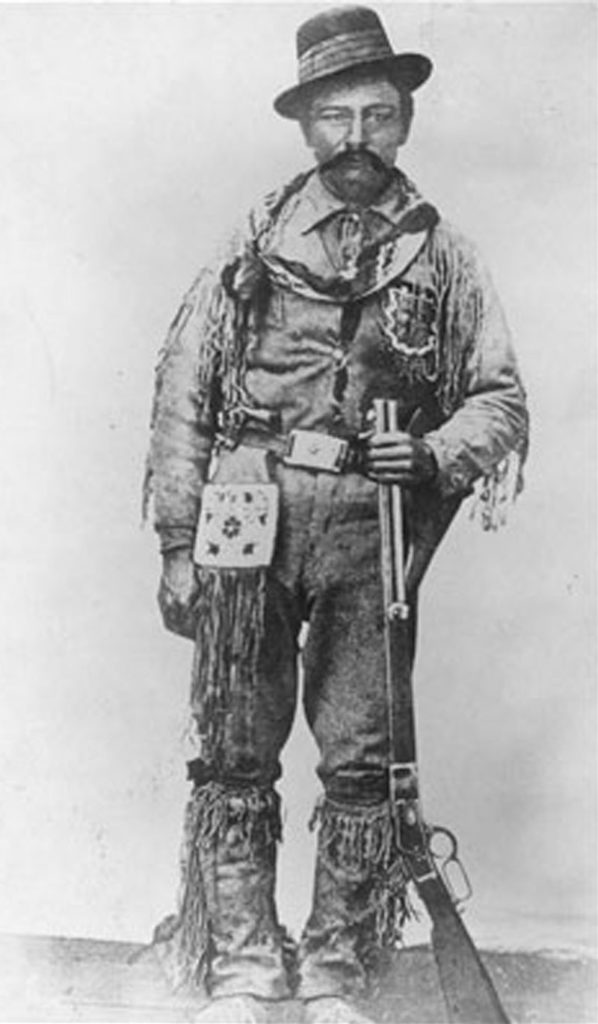 For the next 22 years he was an invaluable asset to the force, arguably as responsible for the peaceful settlement of the West as the Mounties he served.

Potts was born with each foot in a different, dangerous world, that of his mother, a Kainai (Blackfoot) woman who named him Ky-yo-kosi, or Bear Child, and his Scottish fur trader father.

In childhood Potts moved between both worlds. With the Blackfoot he learned to track and hunt and became a formidable warrior; with his adoptive father he travelled between trading posts, learning several Indigenous languages, acting as a cultural go-between and becoming familiar with geography over a vast region.

The Fort Hamilton, located at the junction of the Oldman and St. Mary rivers in what is now Alberta, was nicknamed Fort Whoop-Up by arriving American whiskey traders. The alcohol-fuelled violence radiating outwards, along with reports of an American flag flying over the Canadian fort, prompted westward dispatch of the Mounties.

This led to the infamous March West, where roughly 300 NWMP officers spent two gruelling months crossing 1,300 kilometres of trackless prairie. They split up in southern Saskatchewan, half headed to establish Fort Edmonton, the other headed to Fort Benton in Montana to resupply and get directions to Fort Whoop-Up. Instead, they were advised to hire Potts to guide them. 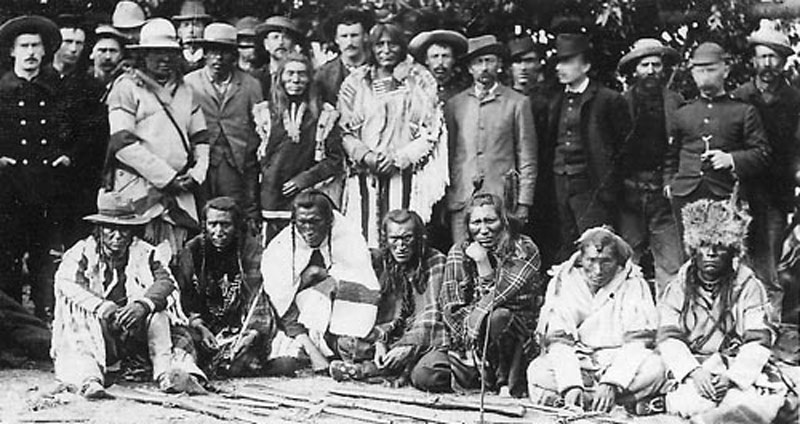 Jerry Potts (standing in the middle on the right side of Running Wolf) with North West Mounted Police officers and a group of Piikani Nation people.
Glenbow Archives NA-2928-53
Potts led the troop to their destination, along the way finding water and pasture for the horses and hunting buffalo to feed the men.

Forewarned, the whiskey traders departed the fort before the Mounties arrived and the red coats’ continued presence kept the outlaws from re-establishing a base. Thus the law arrived in the West before settlers.

Potts “made it possible for a small and utterly insufficient force to occupy and gradually dominate what might so easily…have been a hostile and difficult country,” the Macleod Gazette and Alberta Livestock Record said at the time of his death.

“This man could take a party from place to place by the quickest route, through country altogether unknown to him.”

While Indigenous people were pleased that the whiskey traders had been driven off, they were concerned about encroachment on their land. Potts smoothed the way, advising Blackfoot Chief Crowfoot the force was there to ensure peace and lecturing the Mounties on how to conduct relations with Indigenous leaders.

The Mounties frequently called upon Potts as a guide through the vast, uncharted western territory.

“He possessed an uncanny sense of locality and direction,” enthused NWMP Superintendent Sam Steele, who had been on the March West. “Others could guide travellers through country they had visited before, but this man could take a party from place to place by the quickest route, through country altogether unknown to him, without compass and without sight of the stars.”

Potts lived a hard life and was a hard drinker, which contributed to his death at 56 from throat cancer. He was buried in 1896 with military honours in the NWMP graveyard near Fort Macleod in Alberta.

PrevPrevious ArticleUnforgettable Ian tells the story of a soldier’s battle with dementia
Next ArticleChoose our cover for the September/October issue of Legion Magazine!Next