The Battle of Ridgeway 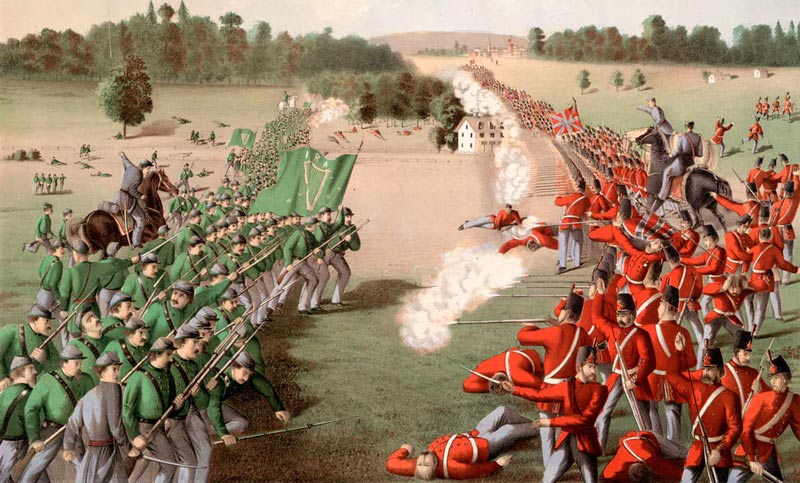 The charge of the Fenians at the Battle of Ridgeway, near Fort Erie, Canada West, on June 2, 1866.
Library and Archives Canada/C-18737

“We are the Fenian Brotherhood, skilled in the arts of war, and we’re going to fight for Ireland, the land which we adore, many battles we have won, along with the boys in blue, and we’ll go and capture Canada, for we’ve nothing else to do.”

On June 1, 1866, more than 1,000 Irish Americans crossed the Niagara River from Buffalo, N.Y., and occupied the town of Fort Erie in Canada West (now Ontario).

They were members of the Fenian Brotherhood, whose invasion was part of a master plan to secure the independence of Ireland.

After the first Fenian raid of Campobello Island, N.B., in April 1866 failed in the face of a British show of force, a new invasion plan was drawn up.

First, multiple raids would draw out British forces while a large Fenian force invaded elsewhere, establishing an Irish government-in-exile and beginning negotiations with Britain to exchange the seized territory for Irish independence.

After two hours of fighting, the inexperienced Canadians retreated.

The raid on Fort Erie was a feint meant to draw troops south from Toronto to deal with a phoney threat on the Welland Canal, a major transportation route connecting Lake Erie and Lake Ontario.

After occupying Fort Erie and destroying the telegraph lines, a Fenian force of about 800 moved north along the Niagara River. They were met early in the morning on June 2 by a roughly equal force of Canadian militia volunteers.

After two hours of fighting, the inexperienced Canadians retreated. The Fenians headed back to Fort Erie, where a small Canadian militia force made a stand. Outnumbered, these Canadians also were driven off.

The next day, the Fenians spotted U.S. Navy gunboats in the Niagara River. Their relief and supplies had been cut off and they knew a large force of Canadian militia and British troops were heading their way. The Fenians fled and were captured by the gunboats.

The Battle of Ridgeway was the first battle fought exclusively by Canadian troops, led by Canadian officers. Nine Canadians died on the battlefield and dozens were injured. 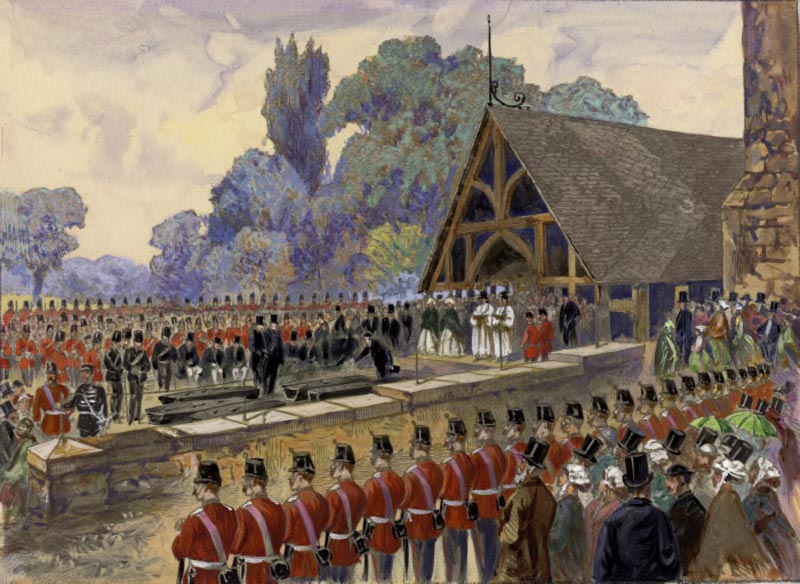 A funeral was held at St. James Cemetery in Toronto to commemorate the Canadians killed in the Battle of Ridgeway.
Wikipedia
The U.S. Civil War had just concluded and the Fenians were battle-hardened veterans; the Canadians were “farm boys, shopkeepers, apprentices, schoolteachers, store clerks and two rifle companies of University of Toronto student volunteers hastily called out the day before,” Peter Vronsky wrote in Combat, Memory and Remembrance in Confederation Era Canada: The Hidden History of the Battle of Ridgeway, June 2, 1866. Some of the Canadians were only 15 years old.

Although the Canadians lost the battle, the Fenians did not succeed.

The Fenians thought they could create a crisis large enough to weaken British resolve to hold on to Ireland. They counted on an uprising of Irish Canadians to accompany rebellion planned in Ireland. They had hoped to capitalize on anti-British sentiment north and south of the border, perhaps even rekindling the animosity between the U.S. and Britain like that of the War of 1812.

But their dreams of support from the United States were crushed by a proclamation of neutrality just days after the battle. Irish Canadians did not rise up.

And, boy, was their timing off. British North American colonies were on the verge of entering Confederation. Instead of inflaming old loyalties, the raids reinforced the reassurance of strength in numbers promised by Confederation and awoke a spirit of Canadian nationalism.

“No mere constitutional proposal could have aroused the feeling that was awakened by the threats,” historian C.P. Stacey wrote in 1931.