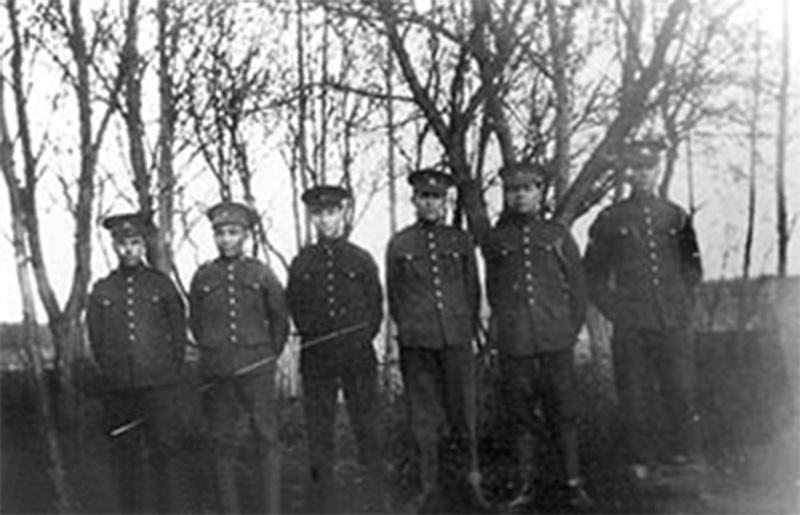 Cree recruits from File Hills, Sask., training for service in the First World War in October 1915.
Glenbow Archives, NA-4611-41
Their ancestors fought beside the British in the Seven Years’ War, the American Revolution and the War of 1812. In 1885, they navigated Africa’s Nile River on a British military rescue mission and volunteered for Canada’s first international expeditionary force at the dawn of the 20th century, fighting with the British in the Second Boer War in South Africa.

But when Great Britain called for aid during the First World War, the support of Indigenous Peoples—First Nations, Inuit and Métis—initially caught the Canadian government off guard.

Thousands of Indigenous people answered the call after the Second World War was declared.

Status Indians were “wards of the government and did not have the rights or responsibilities of citizenship,” historian L. James Dempsey, who is of Kainai (Blood) First Nation ancestry, wrote in Aboriginal Soldiers in the First World War. “As such, they were not expected to take up arms.”

Unexpectedly, hundreds immediately enlisted; by war’s end, thousands of Indigenous men had served. Just how many may never be known. About 4,000 status Indians signed up, but there is no official count of Métis, Inuit or non-status First Nations volunteers.

George McLean and John Shiwak were two of many who excelled. 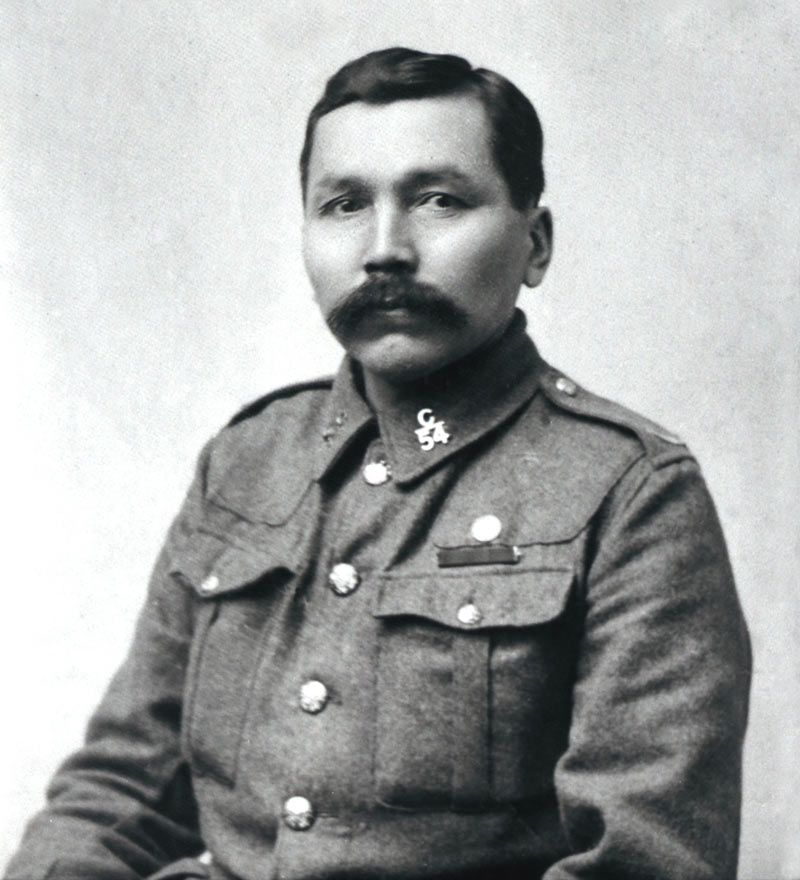 Mel Rothenburger
George McLean was born in Kamloops, B.C., in 1875, of noble lineage through his mother to chiefs of the Douglas First Nation and Okanagan and Nicola Valley peoples. His father was Allan McLean, a descendant of one of Scotland’s oldest clans who also was a member of the Wild McLean Boys, an outlaw gang infamous for robbery and rustling and all of whom were hanged for murder.

George served in the Second Boer War with the Canadian Mounted Rifles. In 1916, at the age of 41, he volunteered again and served in the 54th (Kootenay) Infantry Battalion, which fought at the Battle of Vimy Ridge.

On the third day of the battle, McLean carried a wounded officer off the field, then returned to the fight. He started lobbing Mills bombs (grenades also called pineapples) into a German dugout until one of the men inside asked how many soldiers were with him. McLean, lying, said 150. The Germans surrendered and McLean used their sergeant major’s own weapon as he marched the prisoners to captivity. “Single-handed, he captured 19 prisoners,” reads the citation of his Distinguished Conduct Medal.

After the war, McLean returned to ranching, then became a firefighter. He died in 1934. 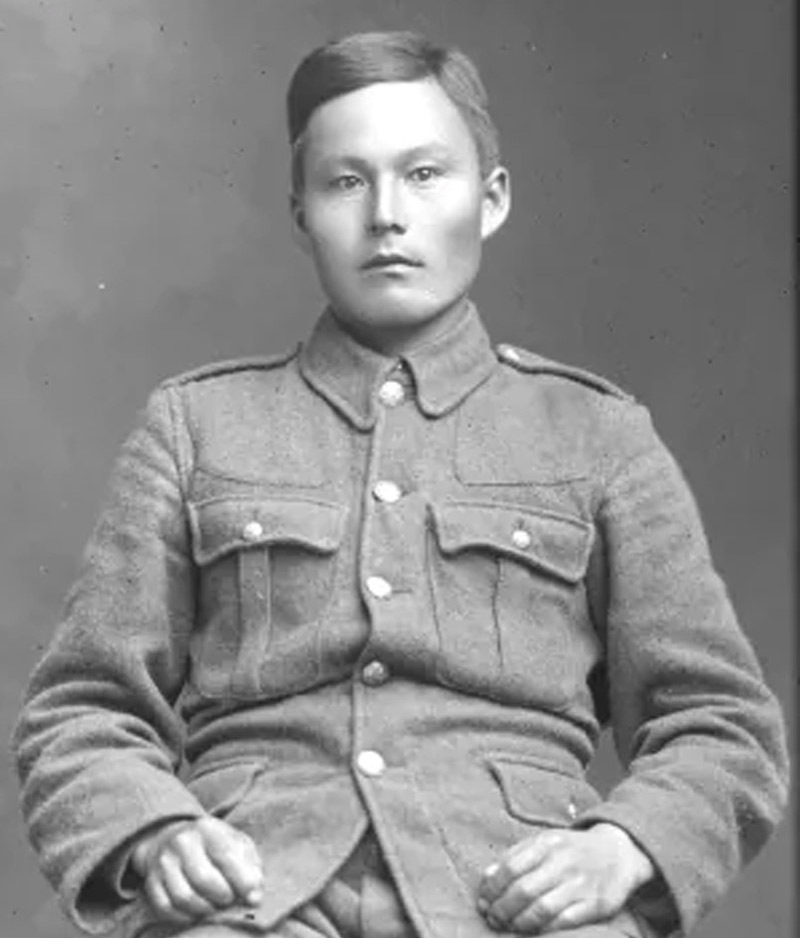 The Rooms Provincial Archives Division/E 29-45/Holloway Studio
Isolation prevented many Inuit from enlisting, but it is estimated that at least 15, mostly from Labrador, served in the 1st Newfoundland Regiment, mainly as snipers and scouts.

John Shiwak, a hunter and trapper from Rigolet, Labrador, enlisted in the Newfoundland Regiment in 1915, trained in Scotland and arrived in France in July 1916. He served as a scout and sniper for 15 hellish months, his expertise as a marksman earning him promotion to lance-corporal in April 1917. But the experience took its toll. He confided to a friend that he was depressed and sickened by the killing.

“He was shy and lonely,” recalled comrade Howard Morry. “Often he’d say ‘Will it ever be over?’ He sure was a great shot and had a lot of notches on his rifle. He said sniping was like swatching seals”—scanning open water or ice for surfacing seals.

In the Battle of Cambrai in November 1917, a shell fell among a company walking along a canal bank, wounding 10 and killing seven, including Shiwak. Click here for more on Indigenous heroes of the First World War.

Indigenous people served in every military theatre and in all services.

Thousands of Indigenous people answered the call after the Second World War was declared. About 3,100 status Indians enlisted, including 72 women. As with the previous war, no one knows how many other non-status First Nations, Métis and Inuit signed up with the Canadian forces, nor how many from reserves near the southern border served with American forces, wrote Janice Summerby in Native Soldiers, Foreign Battlefields. Indigenous volunteers made up a large proportion of Canada’s 15,000 Pacific Coast Militia Rangers, formed after the attack on Pearl Harbor.

Some enlisted because their fathers had served in the First World War. Saskatchewan Métis brothers John and James Ballendine were both snipers in the First World War. Eight of their sons served in the Second World War: Benjamin, Edward, Frank, John, Paul, Thomas, Walter and Wilfred. Five served overseas and they all survived the war, although Benjamin was affected by what is now termed post-traumatic stress injury.

Charles Henry Byce and David Greyeyes Steele were two of many who served with distinction.

The gallant stand of Charles Byce 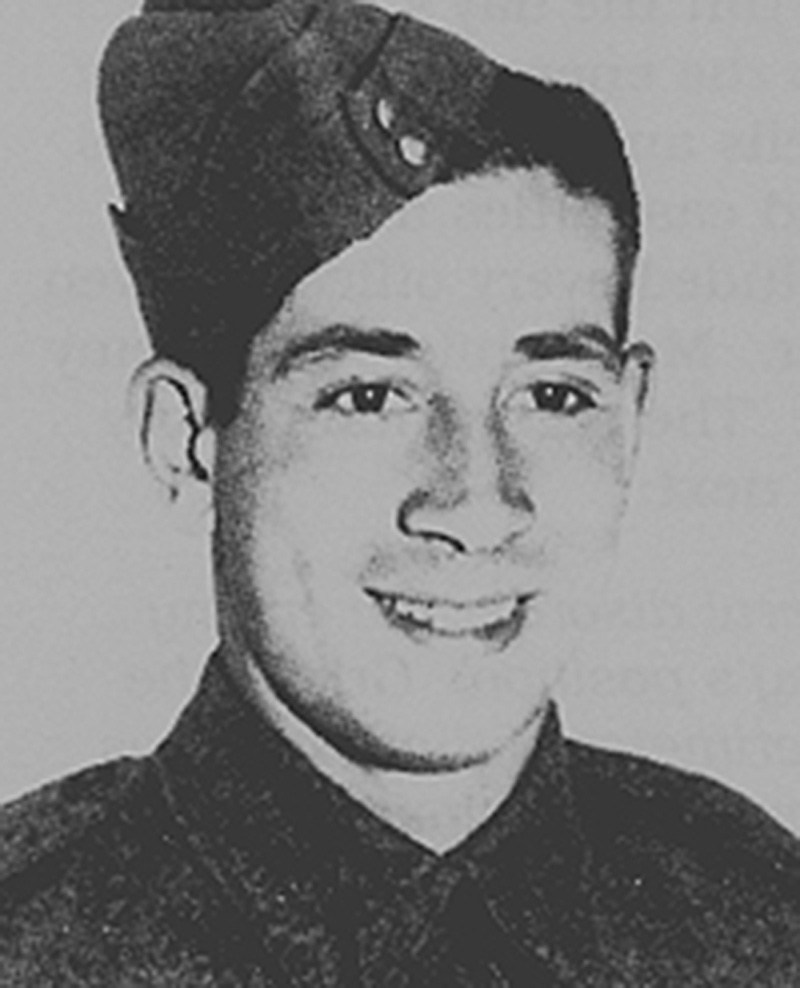 Frank Byce/Veterans Affairs Canada
Charles Henry Byce, whose mother Louisa was from Moose Cree First Nation in Ontario, had big shoes to fill when he enlisted in the Lake Superior Regiment in 1940. His father Henry, of British descent, had earned the DCM and the French Military Medal in the First World War.

Charlie Byce repeated the feat in the Second World War, the only one in his regiment and one of only a handful of Canadians to earn a DCM and a Military Medal.

Byce, an acting corporal, was among two dozen members of his regiment who crossed the Meuse River in the Netherlands on Jan. 21, 1945, intending to sneak behind German lines to bring back prisoners for interrogation.

Byce assumed command as the Germans began their counterattack.

Byce’s five-man patrol provided cover for the reconnaissance group, which came under fire from three enemy positions immediately after stepping ashore. Byce himself used grenades to take out two entrenchments. When his patrol came under fire again, Byce charged the German dugout and lobbed in a grenade, clearing the way for his comrades to make it back to their own lines.

On March 2, Byce, now an acting sergeant, was in a company that occupied some buildings near the Hochwald Forest. Soon the enemy was peppering them with shells. The company commander and every officer were casualties.

Byce assumed command as the Germans began their counterattack. Moving from gun to gun, Byce led a fierce assault that claimed 20 enemy casualties and drove the attacking infantry back. As four enemy tanks moved in, Byce fired a PIAT (Projector, Infantry, Anti-Tank), knocking out the lead tank with his third shot. With no anti-tank ammunition left, he directed his men to hold fire until the remaining tanks had passed, then attack the accompanying infantry. After some fierce fighting, the Germans demanded he surrender; instead, he led his men, under fire, to safety.

“His gallant stand, without adequate weapons and with a bare handful of men against hopeless odds will remain, for all time, an outstanding example to all ranks of the regiment,” concludes the citation to his DCM.

In the Second World War, about 160 Canadians earned the DCM, and only a handful also earned the Military Medal.

After the war, Byce worked at a paper mill near Espanola, Ont., and died in 1994, in Newmarket, Ont. A bronze monument commemorating Byce was unveiled in 2016 on the grounds of the Harry Searle Branch of The Royal Canadian Legion in Chapleau, Ont., where he was born while his father was off fighting in the First World War. His medals, along with those of his father, are in the Canadian War Museum in Ottawa. 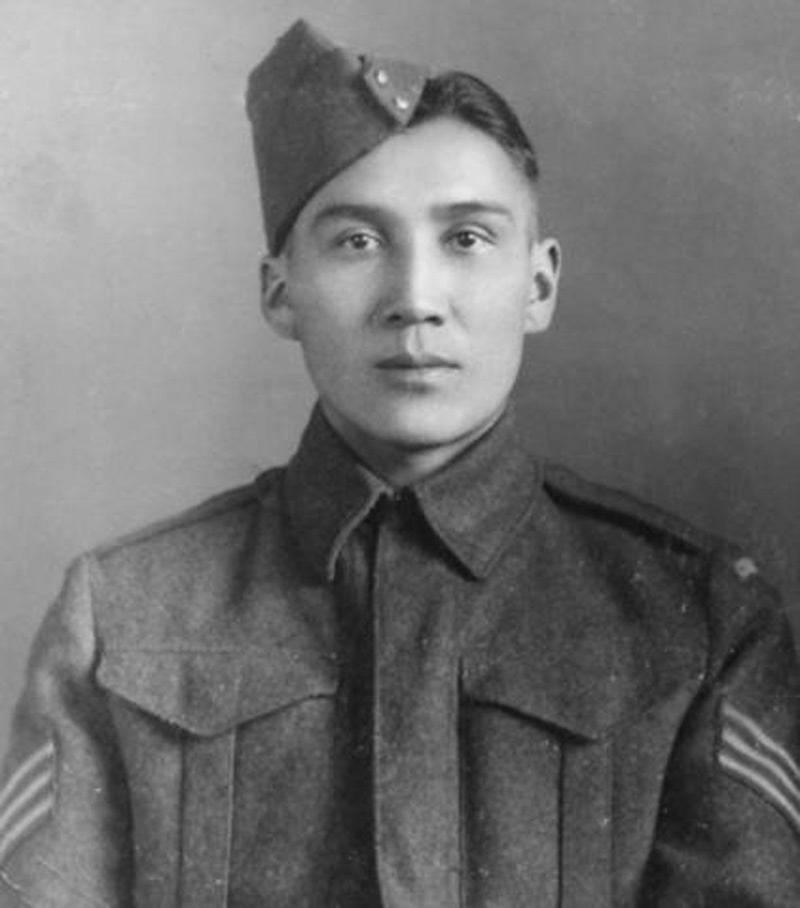 Overseas, he was steadily promoted and was the first status Indian commissioned as an officer overseas, according to the World Wars Aboriginal Veterans website. He also played on the soccer team that won the Overseas Army Championship in 1942.

During the Battle of Rimini in Italy, Greyeyes Steele was commander of a Saskatoon Light Infantry (Machine Gun) mortar platoon which, along with a Greek Mountain Brigade, secured one flank of the 1st Canadian Infantry Division across the Marano River on the hard slog to Rimini, at the cost of more than 100 casualties. Greyeyes Steele was one of 15 Canadians to earn the Greek War Cross for their performance during the battle.

He served in Sicily, Italy, North Africa, France, Belgium and the Netherlands, was an intelligence officer in Germany, and would have served in the Pacific if Japan had not surrendered.

After the war, he returned to farming and married veteran Flora Jeanne, one of the first Indigenous women to serve in the Royal Canadian Air Force Women’s Division. An ardent soccer player, he was inducted into the Saskatchewan Sports Hall of Fame in 1977.

Greyeyes Steele became chief of the Muskeg Lake Cree Nation in 1958, and in 1960 began a public service career with the Department of Citizenship and Immigration’s Indian Affairs branch, eventually becoming the first Indigenous person to be appointed as a regional director.

In 1977, he was appointed a Member of the Order of Canada and received the Saskatchewan Order of Merit in 1993. He died in Saskatoon in 1996. Click here for more on Indigenous heroes of the Second World War.