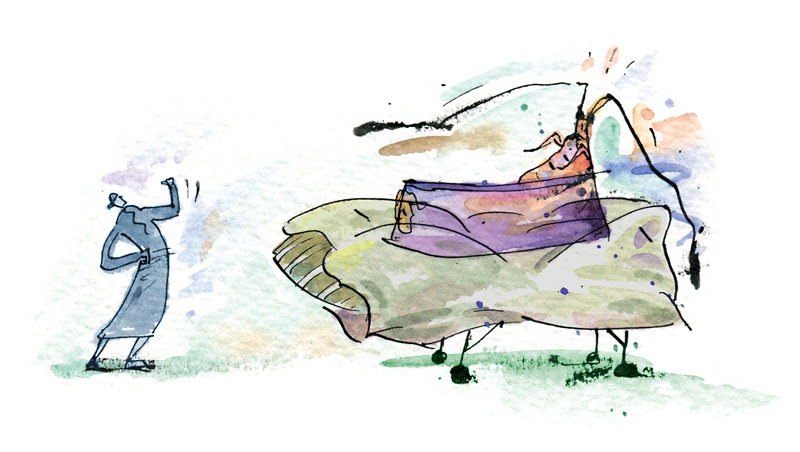 Many military barracks during the Second World War were primitive. Celia Brown, who served in the Royal Canadian Air Force Women’s Division, found herself living in barracks at a Winnipeg repair depot, where she was introduced to the ubiquitous cockroach.

“I got a jar and I caught eight or 10 cockroaches.”

“At night, when you went in the washrooms and turned the lights on, it seemed to us there was millions,” she said. “Probably not that many, but a lot of cockroaches went running. One day, I left my hat on top of my pillow, because you had to make your bed up first, and when I came back and picked up my hat, out popped a cockroach.”

That was the last straw for Brown.

“I got a jar and I caught eight or 10 cockroaches, took them into work the next day. Our CO was quite friendly; and we cooked this up that if we heard his footsteps coming down the hall, I’d get up with my bottle of cockroaches, one of the other women would come over, because we knew he would stop and ask us what we had.

“The next day, they had the exterminators in our barracks, getting rid of the cockroaches.”

During the Second World War, bombers like the famous British Avro Lancaster had only one pilot. Other crew members, the flight engineer for example, were given some flight training so they might be able to help in an emergency.

One Canadian who flew as aircrew acquired more than rudimentary skills during his training in Manitoba.

“They said, ‘Well, if you’re in a bomber and the pilot gets hurt, you might have to help to land the plane.’ They wanted to make sure we knew how to fly a plane. To do that, I ended up flying a Tiger Moth, which is a small training plane. And I flew it and I landed it right by my house, northwest of Edmonton, got out and showed my folks and then I got in the plane and flew it back to Manitoba. And that proved that I could fly.”

Canadian soldiers spent a decade or so in various operations in the former Yugoslavia. One of their main bases was at a place called Velika Kladuša. For a while, that base also housed a Czech helicopter detachment. The Canadians found the Czechs were keen to learn English, which led to a small problem. One of the Canadians explained the situation.

“Being Canadians, we have a tendency to say ‘eh’ at the end of everything. The Czech pilots picked up on this. One of them had a bad habit of coming on the radio and saying his call sign as ‘Roger, eh,’ or ‘Over, eh,’ and it took about four months of the remainder of the tour to convince them that ‘eh’ is not a Canadian word.”

There are times when the spoils of war can be fairly large.

Elsdon Brown, a Canadian who drove for a tank transporter company in the Second World War, recalls an odd assignment he got one day after the war ended.

He was told to take his truck and trailer to Düsseldorf, Germany. When he got there, he found British intelligence officers inspecting a trainload of V-2 rockets. Allied planes had wrecked the engine and the train had been abandoned. The British wanted one of the 12-metre missiles.

“So, they put it onto a trailer for me and I hauled it back to Antwerp, Belgium, to the docks there and loaded it onto a freighter and they took it to the U.K. It’s now in the museum in England, in the [Imperial] War Museums. It’s the only one in captivity.”

One would think that when it comes to getting out of a burning aircraft it’s a mad scramble and every man for himself, but Second World War air force veteran Frank Boyd of Toronto says that’s not always the case. He was in a bomber hit by a German night fighter and his pilot ordered the crew to jump.

“I went down to the back door and opened it up…the wireless operator, he came behind me and the gunner was having trouble getting out of the rear turret. So, I went to grab him, he was a little fellow and I pulled him out. And so, the three of us were standing and the aircraft was on a gentle dive, burning like the hounds of hell and I’m saying to one guy who was married, I said, ‘After you.’ And he’s saying, ‘No, after you.’ And the three fools were standing there saying, ‘After you’ like an Alphonse and Gaston routine, you know.

“Finally, I pushed the little guy, the rear gunner, out and the next guy and then I went. We all, everybody got out, not a scratch.”