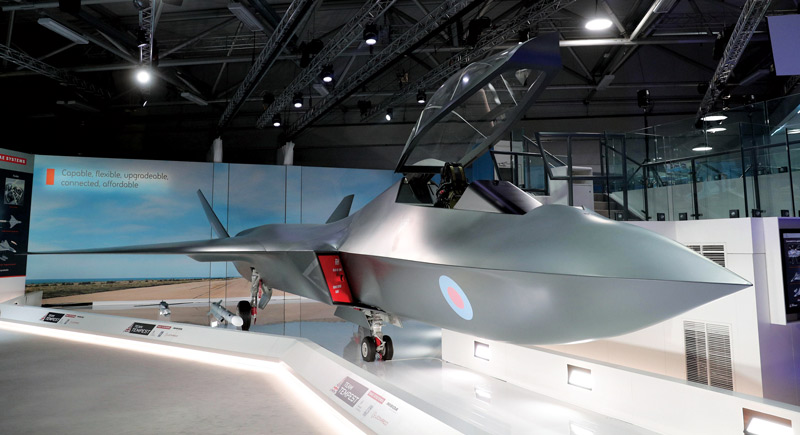 A concept model of the BAE Systems Tempest fighter jet unveiled at the Farnborough International Airshow in Hampshire, England, in July 2018. It is expected to enter service in Britain in 2035.
PA Images/Alamy/P9A0X1

Speaking to the British Parliament in late November 2020, Chancellor of the Exchequer Rishi Sunak said his country faced its worst recession in 300 years (!) and an 11.3 per cent drop in gross domestic product. Worse yet, those numbers did not include the economic effects of Britain’s departure from the European Union, which was expected to add another two per cent to the decline in GDP.

The COVID-19 pandemic and its effects on the British economy have been devastating, and the pandemic has not yet run its course. Even Britain’s much-boasted contribution to foreign aid, pledged by the government during the 2019 election to remain at 0.7 per cent of gross national income, was chopped to 0.5 per cent.

Despite this bleak news, a few days before Sunak addressed Parliament, Prime Minister Boris Johnson delivered a different kind of message: there would be more money for defence and security, in fact 10 per cent more a year for the next four years.

“I have taken this decision in the teeth of the pandemic because the defence of the realm must come first,” said Johnson, adding that his government would end “retreats, transform our armed forces, [and] bolster our global influence.”

The United Kingdom might be detaching itself from the European Union, the message suggested, but it was not abandoning its role in European defence. Moreover, Britain intends once again to exert power globally.

“The international situation is more perilous and more intensely competitive than at any time since the Cold War,” said Johnson, “and Britain must be true to our history and stand alongside our allies. To achieve this we need to upgrade our capabilities across the board.”

This was a message aimed directly at President-elect Joe Biden and the incoming Democratic administration. The special relationship was still there, in other words, and Britain would continue to do its share against an aggressive Russia and a troublemaking China. Not surprisingly, Washington cheered Johnson’s announcement.

British defence efforts have been in decline for years.

The annual defence budget before the announcement was £41.5 billion ($72.8 billion). Johnson’s increase, the largest since Margaret Thatcher’s era, the government claimed, added another £16.5 billion ($28.9 billion) in new spending to 2024-25.

London’s plan is to boost the size of the forces modestly, to develop cyber and space capabilities, create an artificial intelligence agency that will do research into developing drone swarms, and restore the Royal Navy as the foremost in Europe. Defence spending, already more than two per cent of GDP, will be boosted even higher, making Britain second only to the United States in NATO.

Julian Lindley-French, a prominent commentator on British defence policy who a few days before Johnson’s announcement had verged on despondency about the future of the U.K.’s defences, called the prime minister’s policy announcement a “master stroke” that would remind Europe and America of Britain’s vital importance on the eve of Brexit.

Does this matter to the government in Ottawa?

In recent months, there has been talk of a new British-Canadian alliance. The two nations slapped sanctions on Belarus, due to its increasingly dictatorial government, and imposed sanctions on Nagorno-Karabakh because of its vicious little war with Armenia. Both nations have spoken out sharply against Beijing crushing the sparks of democracy in Hong Kong.

Moreover, Ottawa and London agreed that Brexit trade between the two countries, pending negotiations on a new treaty, would continue to be governed by the Canada-European Union Comprehensive Economic and Trade Agreement.

Canadian commentators Hugh Segal and Ann Fitz-Gerald have waxed enthusiastic about Canada’s ties to Great Britain. “The U.K. and Canada both have strong common strategic interests,” they wrote recently for the Royal United Services Institute. “Both countries face the same enemies and share many common values. Both have a strong set of parliamentary traditions, separation between elected leaders and heads of state and very similar arrangements concerning the independence of their public services and judiciary from party politics.

With these nations all increasing their defence spending, the question is: can Canada keep up?

“As was the case in the two world wars and Korea, Canada and the U.K. on the same side, fighting for the same values, often before the U.S. was ready to engage, is nothing new. Now is the moment to take this co-operation, with its strong traditions, vital structures and growing common interests to a new level.”

Some in Canada have even mused about the idea of a robust new Commonwealth alliance linking Britain, Australia, Canada, Singapore and India—militarily weak New Zealand seems to be left out, as does South Africa—in a strong alliance that could play a major role in the Pacific in countering Chinese ambitions. While a formal alliance seems unlikely, there certainly are possibilities for increased defence and diplomatic co-operation. The U.S. and Japan should be brought aboard as well; there are defence links in place already.

With these nations all increasing their defence spending, the question is: can Canada keep up? Canada’s population of 38 million is now over half that of Britain’s 67 million, but Ottawa’s defence spending is not much more than 1.2 per cent of GDP and about one-third of Great Britain’s even before Boris Johnson’s increase.

With the RCN’s surface combatant ships years away from putting to sea, with the RCAF awaiting a decision on new fighter jets (and fearing that it might not be the F-35), and with the army still tiny, Canada increasingly seems to be capable of playing only a bit part in the Pacific—and elsewhere.

Our allies seem aware of the threats, but the Canadian government still appears more interested in post-pandemic social programs than in bolstering the nation’s security. The first national interest of every government is the protection of its people and territory. Britain’s government has recognized this. When will Canada’s?