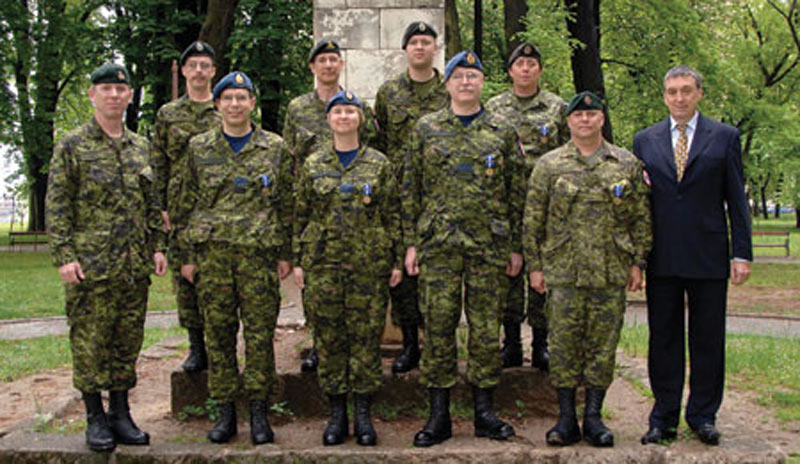 Personnel from Operation Bronze, Canada’s mission in Sarajevo, Bosnia-Herzegovina, were presented the Non-Article 5 NATO Medal in a ceremony in Bihac in May 2007.
Master Corporal Kevin Paul/Combat Camera
In May 2007, on the green and peaceful banks of the Una River in Bihac, Bosnia-Herzegovina, a memorial was dedicated to members of the Canadian Armed Forces who served and died in the wars that followed the disintegration of the former Yugoslavia in 1991.

“The men and women of the Canadian Forces have left a very positive impression of Canada upon the people of Bihac,” said Mayor Hamdija Lipovača. “It is fitting then that this park dedication serves as a lasting memory of Canada’s devotion to helping the people of Bihac return to a peaceful way of life,” he added. 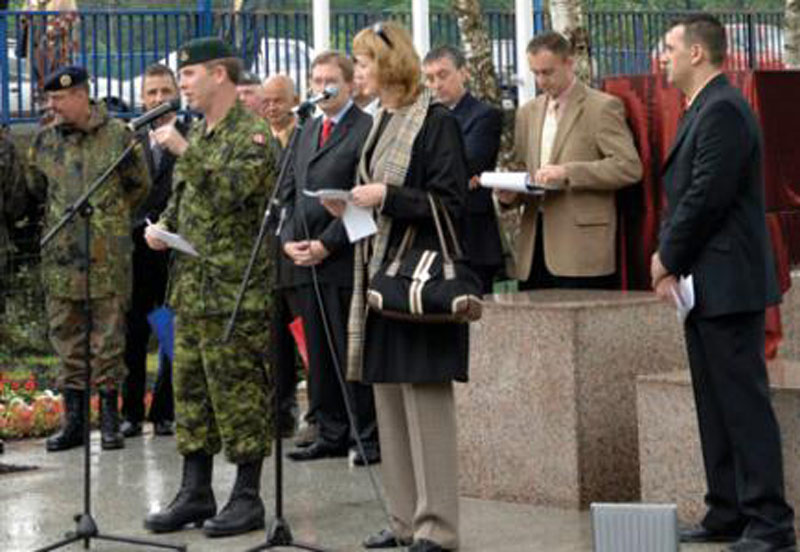 Rules of engagement often made them helpless to intervene.

War raged in Bosnia-Herzegovina for more than three years, during which half its population had fled and more than 100,000 were killed.

The Canadians’ job during the conflict was to protect civilians and stabilize the situation, which meant disrupting the supply of arms fuelling the conflict and providing humanitarian aid. Rules of engagement often made them helpless to intervene; civilians became victims of ethnic cleansing.

After a peace deal was struck in 1995, peacekeepers helped reconstruct devastated communities. 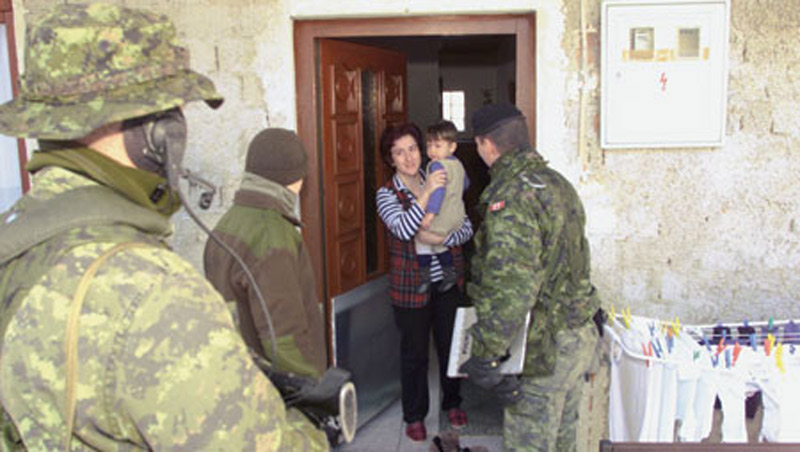 Royal Canadian Dragoons Battle Group soldiers search for illegal weapons and munitions in the village of Vrhpolje in January 2004. Warrant Officer Ken Pichie speaks with a citizen requesting that her home be searched.
FrontLine
And the Canadians used their off hours to volunteer for community projects. They raised money to buy school supplies, toys and clothing for children, equipment and furnishings for orphanages and hospitals. Successive contingents of Canadians even ran a local hockey league for children orphaned by the war.

In 2003, the situation had stabilized enough for NATO to reduce the number of troops in the area from 12,000 to 7,000, including about 650 Canadians. When the European Union Force took over operations the next year, fewer than 85 Canadians continued serving there, providing liaison and observation services during the transition.

The European Union established 44 liaison and observation centres across the country. The Canadians were responsible for an area around Bihac that was home to about 275,000 people in 35 communities.

They conducted presence patrols, “the equivalent to taking a Sunday drive and seeing who you bump into and chat with them,” commanding officer Major Joseph Zunic said in a 2007 article in FrontLine magazine. 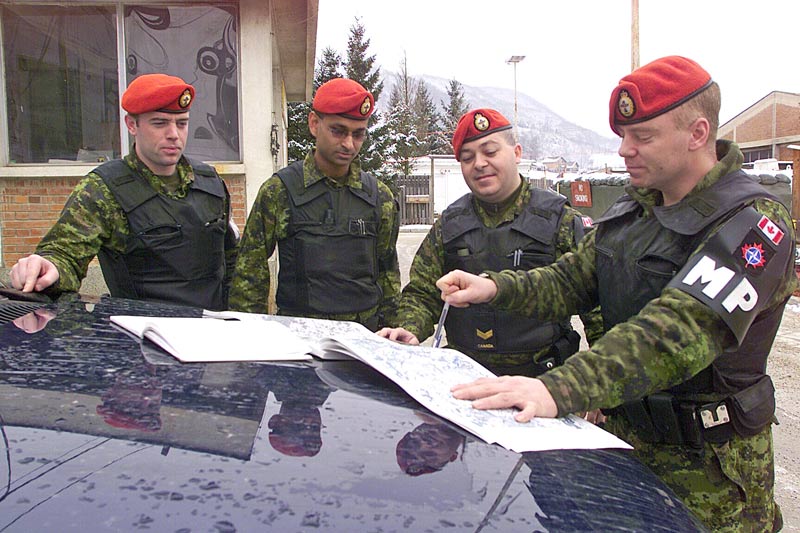 Canadian Armed Forces military police prepare for patrols in Zgon, Bosnia-Herzegovina.
Master Corporal Bernie Tessier/DND/ZN2004-003-003
It was, he said, a “more mature” mission where locals were encouraged to solve their own problems, with advice and mentoring from liaison and observation teams, so “there would not be a dependency that continues ad infinitum.”

“Our reputation,” he said, “was built upon tiny little successes.”

The Canadians in the last tour to Bihac were welcomed with open arms, Zunic remembered, “beneficiaries of all of the thank yous [for] all of the work that had come before us.

“Previous rotations had helped rebuild a fire station in Kulen Vakuf, collected illegal weapons for destruction, co-ordinated meetings of individuals from the three ethnic groups, and donated school supplies from schools in Canada to schools here.”

The memorial honours them all.

PrevPrevious ArticleTales my grandfather told me: Memories of memories of the Somme
Next ArticleChoose our cover for the July/August issue of Legion Magazine!Next