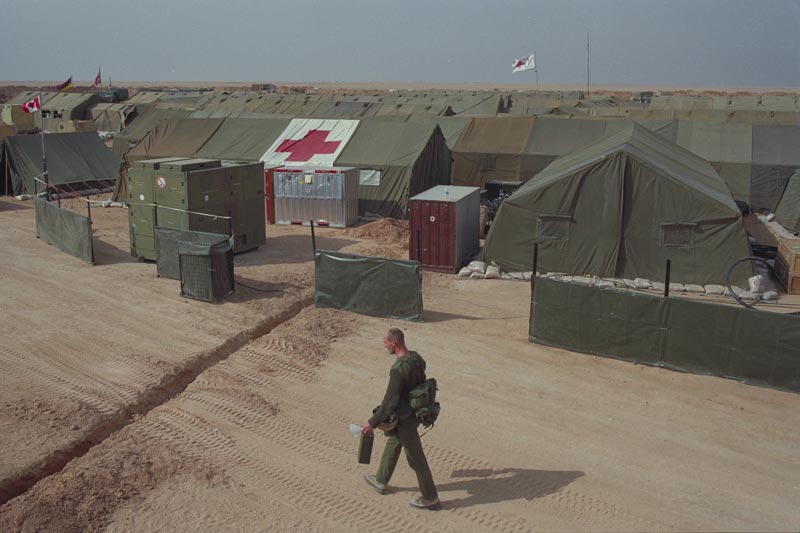 A soldier walks past No. 1 Canadian Field Hospital in Al Qaisumah, Saudi Arabia, on Feb. 11, 1991.
DND/REC92-1558
Gulf War veteran Paul Schutt has a message for Canadians in these pandemic times: Get your COVID-19 vaccine shots—if not for yourself, for your country.

As a private with Charles Company, 1st Battalion, Royal Canadian Regiment, Schutt processed and guarded thousands of Iraqi prisoners during the 1991 Gulf War, all while facing the prospect of a biological or chemical attack.

“We took the plague and anthrax vaccines without them ever being trialled on human beings,” said Schutt, now a nickel miner in Sudbury, Ont.

“I asked the base surgeon: ‘What are the long-term effects of this?’ And she said: ‘I’m not going to lie to you, we don’t know. They’ve never been trialled on anybody; we don’t have any idea if these vaccines will have a long-term effect.’

“She said: ‘They could take 10 years off your life, for all I know. But all I do know is that they could save your life tomorrow.’”

Today, there is concern in some quarters about the newly developed inoculations designed to end the pandemic. The fear is that the vaccines have rolled out too quickly 10 months into the COVID-19 pandemic, when vaccine development can usually take up to 10 years or more

Experts insist the speed is not a product of shortcuts, but instead a combination of multitasking, unprecedented global coordination and the fruits of earlier research.

Understanding this is a matter of public health concern, Kerry Bowman, a University of Toronto bioethicist and environmentalist, told CTV News in December. Bowman’s work on emerging zoonotic diseases involved him in research and health care during the Ebola virus and SARS outbreaks.

The SARS-CoV-2 virus that causes the COVID-19 disease isn’t the first coronavirus. Human coronaviruses were first identified more than 50 years ago with the HCoV-229E, which infects humans and bats. Scientists have since discovered five others, including MERS-CoV, which causes Middle East Respiratory Syndrome, and SARS-CoV, the first strain of the SARS coronavirus species that led to the current pandemic. The groundwork was not for nothing, said Bowman.

“Because we’ve got this pattern of emerging infectious diseases…many good people have been on to this and developed a research platform that was tremendously useful when this COVID-19 pandemic struck,” said Bowman.

“They really weren’t starting from ground zero at all. We built on previous lessons tremendously and now we’re going to soon reap the benefits of that.”

You couldn’t deploy if you didn’t get those vaccinations.

In comparison, the figure is more positive than the 39 per cent of American respondents who told the Pew Research Center in January that they definitely or probably would not get vaccinated.

Now time is of the essence in increasingly critical ways as more contagious strains of the virus begin to emerge in North America. 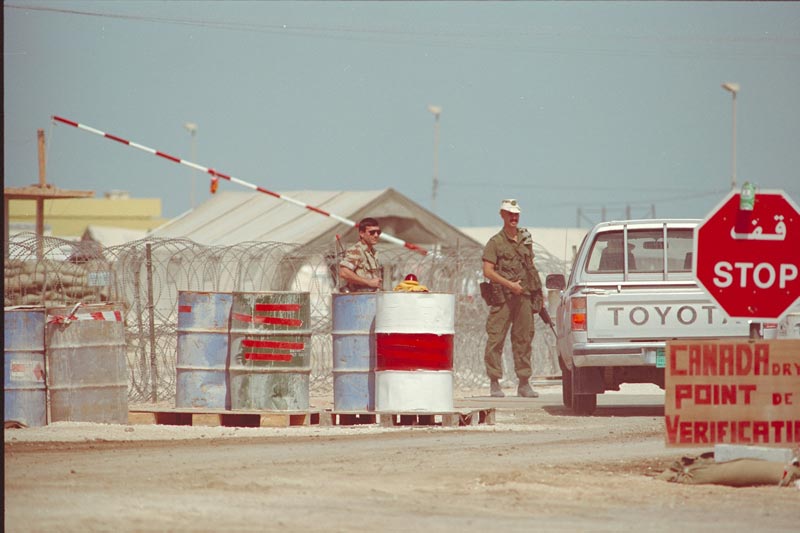 Guards screen vehicles at the main entrance to the “Canada Dry 2” base in Qatar on Feb. 21, 1991.
DND/ISC91-5368
Soldiers sent to the Gulf 30 years ago to help rid Kuwait of Saddam Hussein’s Iraqi invaders were subjected to a barrage of inoculations before they left and when they arrived. Researchers are investigating whether the combination of shots played a role in the multiple symptoms associated with Gulf War illness.

“You couldn’t deploy if you didn’t get those vaccines,” said Schutt, who says he doesn’t know if his pancreatitis is related to his service. “So myself and every one of those soldiers who took those vaccines without them ever being trialled did it for our country.”

Schutt describes them as the first Canadians deployed to a war zone who didn’t stand next to their allies on the front line—an ignominious distinction which he says makes him sad.

The navy, air force and army were all sent to the Gulf, a total of about 5,100 personnel. Some 530 personnel staffed a Canadian field hospital in Al Qaisumah, Saudi Arabia, caring for both coalition and Iraqi wounded.

Canadian soldiers guarded hospitals and PoWs, watched over the airfield at Doha, Qatar, and cleared landmines and unexploded ordnance during and after the short war.

In 1991, Iraq had the fifth-largest army in the world, with more than a million men in uniform. Three-quarters of Iraqi males between ages 15 and 49 were conscripted; only a third of the Iraqi army were skilled professional fighters.

Saddam’s invading forces numbered 120,000. It took his troops just two days to conquer Kuwait in August 1990, after which Saddam boosted his occupying force to 300,000.

On Feb. 23, 1991, after just two days in-country, Charles Company, 1RCR, deployed forward into the desert 30 kilometres south of the Saudi-Kuwait border, where it joined the Forward Surgical Units of 1 Canadian Field Hospital and the British 32nd Field Hospital. The soldiers assumed established perimeter patrols, gate guards and roving pickets while assisting in the setup of the rest of the Canadian hospital.

The ground war started the following day, and the first casualties began arriving from the front less than 18 hours after the Canadians had taken up their new post. 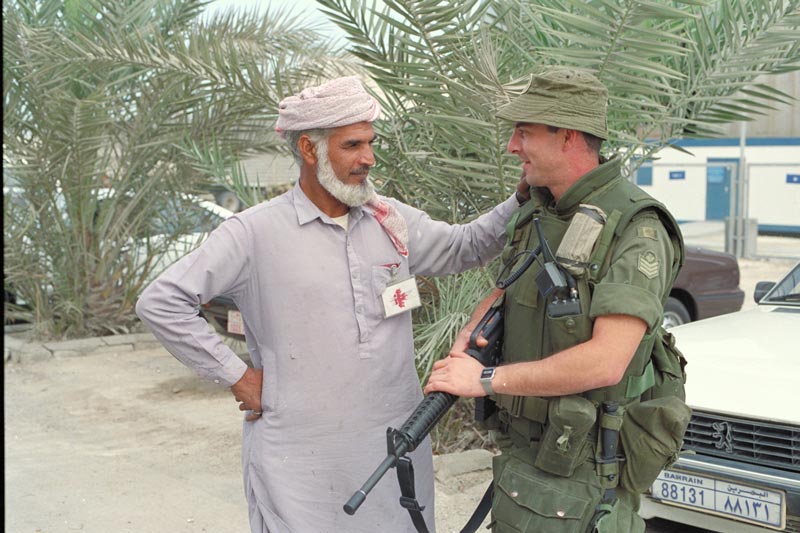 Sergeant Dan Potvin chats with a civilian while on sentry duty at the Canadian military headquarters in Bahrain on Jan. 13, 1991.
DND/ISC91-4119
The wounded included Iraqis. The thunk-thunk-thunk of approaching helicopters came to signal, as Lieutenant C.W.J. MacLean described it, “the beginning of our primary task: the handling, searching, and escorting of Iraqi wounded and prisoners of war, and stretcher-bearing allied and enemy casualties.”

The cases ranged from simple dehydration to profound head wounds and severed limbs. The company would soon assume duties escorting and guarding captured Iraqi soldiers at a British prisoner of war camp a few kilometers away. It was built for 8,000, said Schutt, but it held many more, all outdoors behind high wire fences.

“They had all their life savings with them,” said Schutt, “in American dollars, in Deutschmarks, in Canadian dollars—in every currency you could imagine, because they were told if they were wounded that, because of the American health-care system, they would have to pay for their treatment. They were a sad lot.”

The prisoners would arrive in groups of 60 by helicopter, usually Chinooks, after which they were herded into a holding pen and searched, said MacLean. They were then examined by medical teams and documented. Most were malnourished, dehydrated and demoralized. Many had no socks or shoes.

“All wore a look of total defeat that was more disturbing than even the most menacing growl.”

The threat of neurological, biological or chemical warfare dictated that the prisoners’ hands could not be bound. Commands were limited to hand signals, explained MacLean in an account he wrote for the regimental newsletter—not only because of the language barrier, but quiet captors meant for calm captives.

“Our system was so efficient, in fact, that when the British resumed their duties, they adopted the Charles Company search and handling techniques,” wrote MacLean. 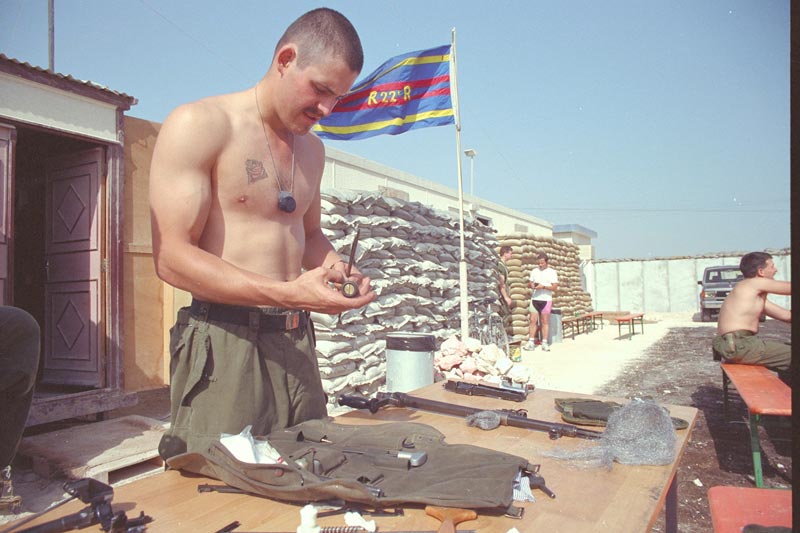 Private Alain Maréchal cleans his weapon at the Royal 22nd Regiment headquarters at the “Canada Dry 2” base in Qatar on Feb. 25, 1991.
DND/ISC91-5406
It was hot and dusty. Sand and grit blocked air filters, dirt clogged fuel lines and weapons had to be cleaned regularly.

The Canadians returned to the field hospital after the shooting stopped and the flow of PoWs abated. On March 20, 1991, they returned home, their bags and clothing reeking of oil from the burning wells that Iraqi troops ignited on their retreat.

He says the most important message he can impart in these times is that soldiers didn’t think twice about taking vaccines they trusted could save their lives, nor should Canadians now. He even suggested an ad campaign on the theme, leaving a message at his MP’s office.

“Nobody called me back,” he said.

For more on Canada’s role in the liberation of Kuwait, read “Gulf War Aftermath” in the March/April 2021 issue of Legion Magazine, on newsstands now.