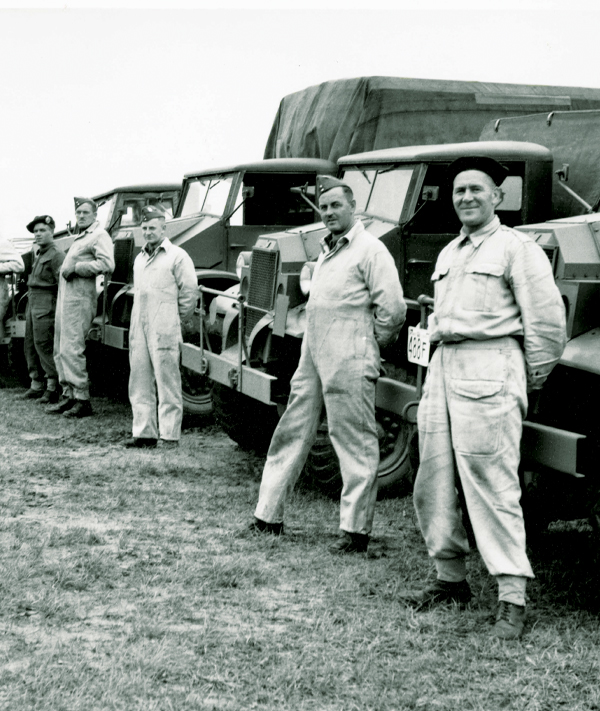 Canadian Army drivers stand in front of their Canadian Military Pattern trucks during the Second World War.
Capt. Walter R. Travers/CWM/19870227-045
The Desert Fox, General Erwin Rommel, had to make a decision. It was June 1942 and after mauling Britain’s Eighth Army in the Western Desert campaign, the commander of Germany’s Panzer Army Africa was at the end of his logistical support.

Rommel was a brilliant tactician, but his strategic vision was dulled by the defeat he inflicted on the British in Libya, forcing them to retreat to El Alamein, Egypt, a shot-up railway station along the Mediterranean coast.

He decided to make one last effort to crack British defences and have his Panzer forces roll through Egypt to the Nile. But first he had to capture Tobruk, Libya, and gain the stores and petrol left by the retreating British—supplies he needed to continue his offensive.

The victory at Tobruk netted him 5,000 tonnes of supplies and 1,000 tonnes of fuel, but the biggest prize he scavenged was some 2,000 Canadian Military Pattern (CMP) trucks. The trucks were designed to be adaptable for a variety of purposes, and the Germans refurbished the captured trucks to their needs. The trucks helped solve German logistical and transport problems. 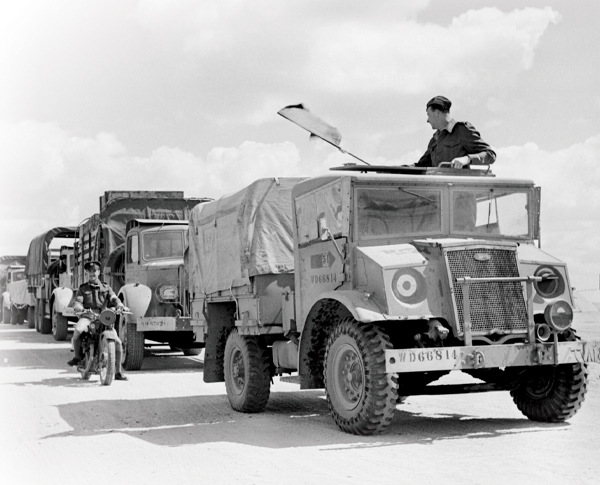 A convoy of CMP trucks carries Royal Air Force personnel in Libya in the early 1940s.
IWM/CM5067
There is a prevalent misconception that the German Army was highly mechanized and mobile, but this was far from the truth. The Germans also relied on horses, some 2.75 million in total, of which 750,000 died during the war. German units were forced to scavenge battlefields because they did not have a sufficient number of armoured vehicles, tanks and trucks to sustain their order of battle. Captured vehicles and equipment would be used in any operation—a policy adhered to by the Afrika Korps.

And the Germans were apparently not too pleased with their own trucks. Frederic von Althen, a former prisoner of war, spoke of his wartime experience with the CMP truck, saying the Canadian trucks were the elite of their type and were much sought after. 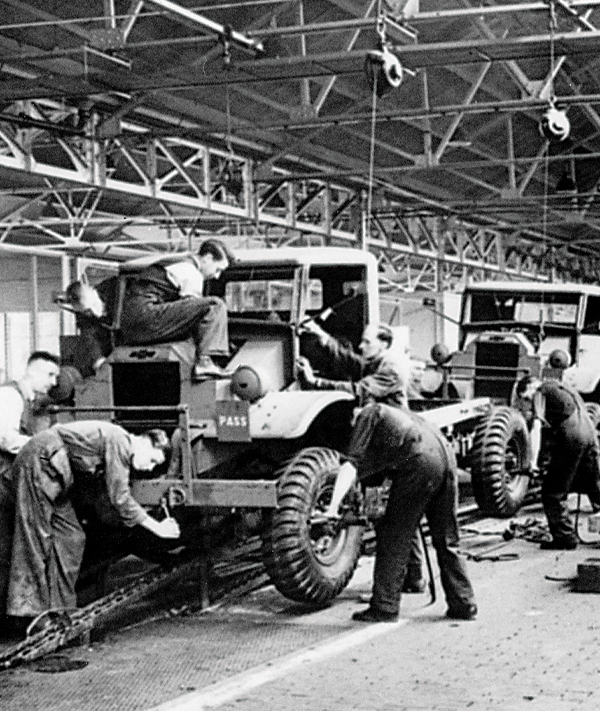 A General Motors assembly line produces CMP trucks, circa 1940.
NFB/LAC/C-085219
Canadian-built CMP trucks also made a great contribution to the Allied victory in the Sahara, according to Britain’s official History of the Second World War. These vehicles were the backbone of logistical support for the Eighth Army. Amazingly, the output of vehicles by Canada exceeded that of the Axis powers Italy, Germany and Japan.

Prime Minister Mackenzie King preferred that Canada’s wartime contribution be materiel rather than manpower, and he supported the production of military trucks. Anything to avoid the possibility of conscription, which had split the country along French and English lines during the First World War.

The CMP trucks were built in southern Ontario mainly, and were used by the Eighth Army almost exclusively. Simple in design, they were easy to maintain and modify. They could cover all kinds of terrain. Ordinarily, General Motors, Ford and Chrysler were highly competitive, but they recognized that the war abroad would have repercussions at home and agreed to work together. All three manufactured the three-quarter-tonne trucks. There were 90 types on 12 different chassis, and they were used as vans, water carriers, cable layers, mobile offices and ambulances.

Production of CMP trucks started in 1939. By the end of the war, 850,000 military vehicles had been manufactured in Canada, and 725,000 of them were trucks. This gave the Canadian Army a troops-to-truck ratio of 3:1 (compared to 7:1 for the Americans). Canada had “the most mobile army in the world,” wrote Peter Shawn Taylor in a National Post article about military vehicles.

Drivers were mostly members of the Royal Canadian Army Service Corps, and they had to adapt to various environments. The desert was a tough assignment: the heat of the day is debilitating and desiccating, then it is overcome by frigid air at night. Drivers had hard work to load and unload the trucks as well as drive them, sometimes 500 to 1,000 kilometres at a stretch.

One driver spoke of his “struggle to keep warm and clean. I sleep wrapped up in a down sleeping bag with two blankets under me and three on top…and still the cold seems to penetrate everything.”

They were often on the verge of running out of water, receiving one canteen every other day, and the water they had was often brackish. There was no easy supply run, a constant shortage of rations, and the obvious dangers of driving in a war zone. Sandbags placed in the footwells helped protect legs from being blown off if a truck hit a mine.

Desert roads, if there were any, were uneven and potholed, with rocks that tore up tires. Tires would burst and changing them was no walk in the park. Sand was everywhere, forming khamsin, a dry, hot, sandy wind that penetrated windscreens and got into eyes and under clothing. The sand was a constant enemy in keeping vehicles going. 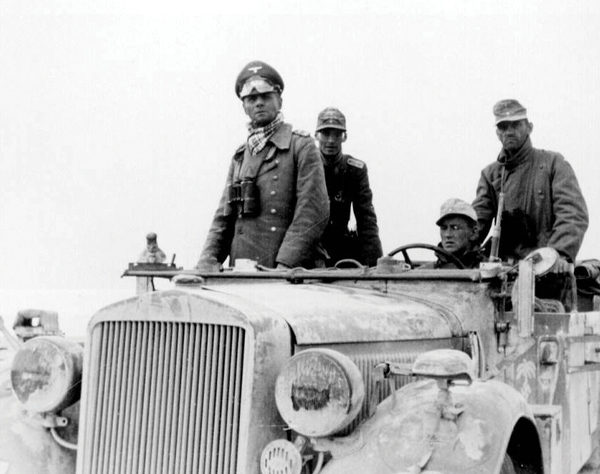 General Erwin Rommel surveys the Libyan terrain during the war.
Alamy/EX6JTX
“I liked learning the skills of navigation and of balancing the vehicle while driving across soft sand by lightly keeping the pressure on the throttle so that the wheels don’t spin too much,” wrote driver George Rock, who also recalled the desert landscape he drove through. “I remember the pleasure, a cold bottle of beer in the evening, sitting in a folding chair while the meal is cooked over a slow fire, a canvas bag of water hung from the front of the vehicle.”

The CMP trucks were hard to drive, requiring special talent to take them over non-existent roads and manage the crash gearbox, which required the driver to manually synchronize the speed of the engine with the driveshaft. It was virtually indestructible, said veteran Bob Farquharson, but its rack-and-pinion steering was “really hard. You really had to drive it.”

But none of this kept the Long-Range Desert Group, the British reconnaissance and raiding unit that operated behind enemy lines, from relying on it.

By the Battle of Normandy in 1944, the transport situation had become so critical that some troops resorted to bicycles, which they rode to battle in proper military formation, according to Peter Caddick-Adams in Sand and Steel: A New History of D-Day.

Service Corps personnel operating in the rear echelon were often regarded as not being in a fighting arm, but without them Canada—and all the Allies—would have been in dire straits.

As the war went on, reliance on CMP trucks increased. By 1944-45, the Western Allies faced a logistics nightmare. Eisenhower’s army advanced so quickly that supply lines from Britain were stretched. Until the port of Antwerp, Belgium, was reopened, there was no major seaport available east of Normandy. Allies in the Low Countries were dependent on lines that stretched all the way back to Normandy. Supply trucks became paramount. The loss of any truck, and especially its trained driver, was significant.

A good many of the trucks survived the rugged terrain, the perilous trips and the punishing drivers. Today, an appreciation for this vehicle’s distinct history is reflected in interest and trade in them.

Some 15,000 CMP trucks remained at the end of the war. Some were integrated into peacetime armies, some were purchased by countries with military conflicts, and some found civilian roles in forestry, grain transport, snowplowing and even firefighting.

Some restored trucks still remain, mainly in private hands. Current sale prices range from $3,800 to $43,000, and there is a small parts-manufacturing industry in the Netherlands. The Canadian War Museum has a near-perfect specimen on display.

All the truck’s a stage

Military trucks took on another role in 1942, when Prime Minister Winston Churchill went looking for a “general who could fight.”

He appointed General Bernard Montgomery as commander of the British Eighth Army in the Western Desert, and Monty often gathered his soldiers around him, getting up on the hood or roof of a jeep or truck (below) or tank so everyone could see and hear him. 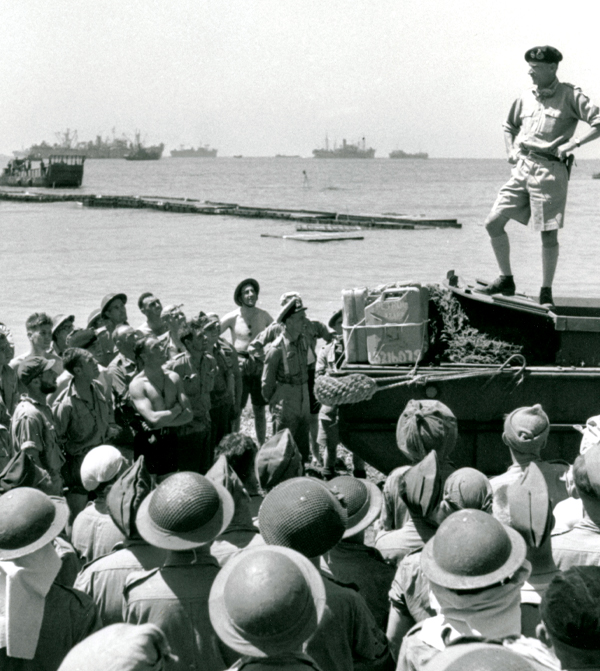 Frank Royal/DND/LAC/PA-130249
By dint of his charisma and tenacious optimism, Montgomery turned a defeated army into a superb fighting machine. From atop a vehicle, he spoke to the troops “man to man” (according to my uncle). It had a great effect.

It was theatre and it worked. The ordinary soldier now knew what his general looked like, and more to the point, the general established the kind of camaraderie that makes men willing to fight.