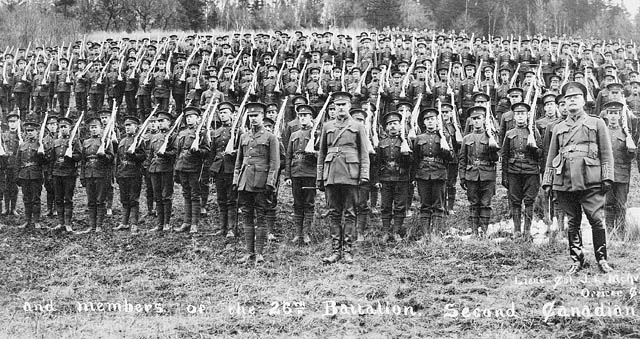 The 26th Battalion of the Canadian Expeditionary Force in 1915.
Wikipedia

The Canadian Expeditionary Force’s first battle experience, aside from a trench raid, came in the Battle of Neuve Chapelle in mid-March 1915.

The Canadians were tasked with preventing the Germans from reinforcing their position while the British pushed through enemy lines to advance the front. A new front was established, but the Allies were unable to exploit their advantage and press on due to difficulty transmitting orders and a lack of reserves.

“The guns are dropped and the teams go out, form up and move away.”

James Wells Ross talked about battle preparations in a letter home on April 13, 1915, one of several quoted here from the Canadian Letters & Images Project.

“Imagine a column of horses and vehicles moving along a road. They turn into a field over a rough ditch without a word; the guns are dropped and the teams go out, form up and move away. The gunners then start digging and filling sandbags for the rest of the night. We have a hot supper of “Machonacie” rations [a tinned stew of turnips, carrots and potatoes], tea and biscuits (perhaps rum, if cold,) at about 11:30 and start digging again. Meanwhile the teams go back, unharness, feed after watering and we all turn in.”

It was not so tranquil once the battle started.

British Major Herbert Stewart wrote in his diary that “The earth shook and the air was filled with the thunderous roar of the exploding shells…amidst the clouds of smoke and dust they could see human bodies with earth and rock, portions of houses and fragments of trench hurtling through the air.”

In the 35 minutes leading up to the battle, 342 British guns discharged more shells than had been used in the three years of the Boer War, “a sobering reflection upon the transformation of warfare in the space of 15 years,” says firstworldwar.com.

“The earth shook and the air was filled with the thunderous roar.”

But bombs (as grenades were called then) were used too, Sergeant Tommy Robus wrote to his clergyman. “We used bombs in the fight. The bomb-throwers go ahead of everybody and throw bombs in places where there is lots of men and cause consternation in the enemy’s trenches & we also use them to ward off attacks & they are very effective too.”

“Our casualties were not very heavy at Neuve Chapelle as we only kept the enemy busy at rapid fire so they dare not send troops to help them,” Albert Edward Roscoe wrote to his mother on May 13.

The British suffered nearly 13,000 casualties, about 300 Canadian, of which about 100 were killed.

At Neuve Chapelle, artillery was the big fear, but a bigger one lay in wait. In just six weeks, the Germans would use gas for the first time.