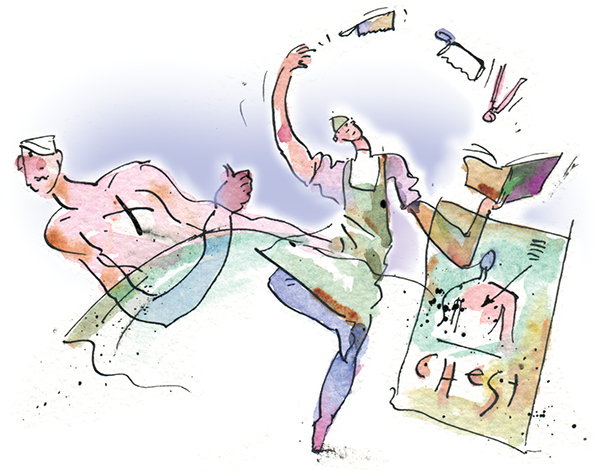 Illustration by Malcolm Jones
HMCS Cayuga was a Tribal-class destroyer that did three tours in Korean waters during the Korean War.

On one tour, its surgeon was an affable chap named Joseph Cyr, an American, oddly enough, who quickly became a favourite of the entire crew.

When the captain developed an inflamed molar, Cyr told him he didn’t know a lot of dentistry, but he’d give it a shot. He retired to his cabin for a little reading, emerged and pulled the skipper’s tooth with no fuss and no complications afterward.

He took care of all the normal medical problems—cuts, sprains, breaks and minor infections—that occur among any crew at sea.

One time, though, Cayuga was sent to provide gunfire support to a Korean commando raid. When the troops came off, a number of them were wounded, some seriously.

“Our doctor, Joe Cyr, was the hero,” a former Cayuga crew member said. ”He was parading up and down the upper deck with his whites and his hat and doing this patchwork and so on and for which we were all highly impressed.”

He fixed up the wounded, even performing chest surgery on one casualty.

The ship’s company thought Cyr should be recognized and some of the officers contacted a public affairs officer. In due course, stories of Cyr’s efforts ran on the Canadian Press and Associated Press news wires,
getting big play in newspapers back home.

One story was published in New Brunswick, where the real Dr. Joe Cyr was practising medicine in Grand Falls. He was startled to read of his naval exploits.

In due course, a signal was sent to Cayuga explaining that the surgeon was a phoney, which stunned everyone who knew Cyr. He was unmasked as Ferdinand Waldo Demara, who had purloined Cyr’s credentials and parlayed them into a naval appointment.

“You know fellows,” Demara told a couple of shipmates, “I just had hoped that we could have gone back to Esquimalt (Cayuga’s home port) and then I just would have left and that would be it.”

He was escorted back to Canada, discharged and returned to the United States. Canadian naval authorities apparently declined to press any charges, given the already enormous embarrassment caused by the fake physician.

The authorities were not alone in being fooled by Demara. Over the years, the man who would be known as “The Great Imposter” also passed himself off as a lawyer, a sheriff’s deputy, an assistant prison warden, a professor of psychology and a Trappist monk, among other things.

The crew of Cayuga maintained a fondness for their bluffing surgeon.

A quarter-century after the Korean War, the ship’s company held a reunion in Esquimalt and, one of the celebrants says, they got a surprise. Their old shipmate was still at it.

The crew of Cayuga maintained a fondness for their bluffing surgeon.

“Guess who appeared? The Reverend Joseph Ferdinand Demara…, supposedly resident chaplain of the Anaheim Hospital in Anaheim, California. And he blew in and we accepted him, of course.”

Demara died in 1982. A few years ago, Time magazine named him one of the Top 10 imposters of all time.

Joining the military during the Second World War was the accepted thing for young men. Young women, though, often got a lot less support.

When Glennis Boyce enlisted in what was then the women’s division of the Royal Canadian Air Force, she ran afoul
of her parents.

“I tried to break it gently to my mother by telling her that I was thinking of joining the RCAF. At that time, I had already been sworn in. She…said they won’t take you, you’re too small.”

Boyce broke the news to mom three days later and she was not pleased.

“She told me that I would have to tell my father because she wasn’t going to. He was so mad at me that I understood why she didn’t want to tell him. It hurt my feelings and I kind of avoided his eyes until it was time to leave.”

Father thawed, though: “He accompanied me to the train station to see me off and I felt better.”

Patricia Booth had similar problems. “I wanted to go in it and my father wouldn’t give his consent. So, I went without his consent and joined up. And he said I would never darken his doors again. But he was there to carry my kit bag when I arrived on my first leave.”

These are anonymous, but they likely fit any army anytime, anywhere:

“We, the willing, led by the unknowing, are doing the impossible for the ungrateful. We have now done so much for so long with so little, we are now capable of doing anything with nothing.”

“Basic Flying Rules: Try to stay in the middle of the air. Do not go near the edges of it. The edges of the air can be recognized by the appearance of ground, buildings, sea, trees and interstellar space.”