On the morning of March 24, 1945, 1st Canadian Parachute Battalion jumped into heavily defended territory on the east bank of the Rhine River, part of the airborne assault during the Battle of the Bulge.

“They called it Operation Varsity,” recalled Herb Harris, a member of the battalion. “Our group of 2,000 men jumped together in six minutes, going out one on top of the other. We landed across the Rhine and we were right on top of the Jerries. It was intense fire—the Germans just opened up on us.”

There were immediate casualties—23 Canadians were killed and two were captured. Among the 40 wounded was Corporal Frederick George Topham. 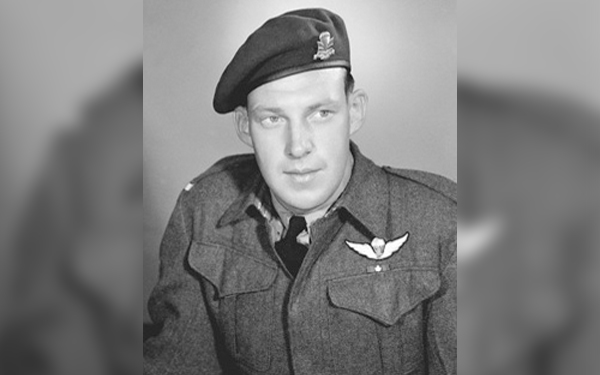 Corporal Frederick George Topham
Wikipedia
“Corporal Topham was our medical orderly,” Harris recalled. “He went forward in intense fire to replace the orderlies killed…as they were trying to tend to the wounded.”

“Without hesitation and on his own initiative, Corporal Topham went forward through intense gunfire to replace the orderlies who had been killed before his eyes,” reads the citation to the Victoria Cross Topham earned that day.

“As he worked on the wounded men, he was himself shot through the nose,” said Harris, in a Memory Project interview. “I think he just put some penicillin powder on there, and a Band-Aid.”

“Topham refused help for his own wound until all the casualties had been cleared.”

Through continuous fire, Topham carried the wounded steadily back to the shelter of the woods.

“Gliders started coming in right after we jumped. They were sitting ducks. The Jerries just opened up on them, just like going out duck hunting. His officers told him he should not go and tend to the men in the gliders, but he just went there regardless,” said Harris.

Topham refused help for his own wound until all the casualties had been cleared, then on his way back to his company he came across an armoured personnel carrier that had received a direct hit and was afire. Bombs were still dropping all around, and although an officer warned him not to approach, Topham rescued the three men inside “in spite of the blasting ammunition and enemy fire,” reads the citation.

“This NCO showed sustained gallantry in the highest order,” reads the citation. “For six hours, most of the time in great pain, he performed a series of acts of outstanding bravery, and his magnificent and selfless courage inspired all those who witnessed it.”

“It was quite an experience,” said Harris, “serving with the finest soldier Canada had to offer.”