Home » Blog » HISTORICPHOTOBLOG » Into the Fire 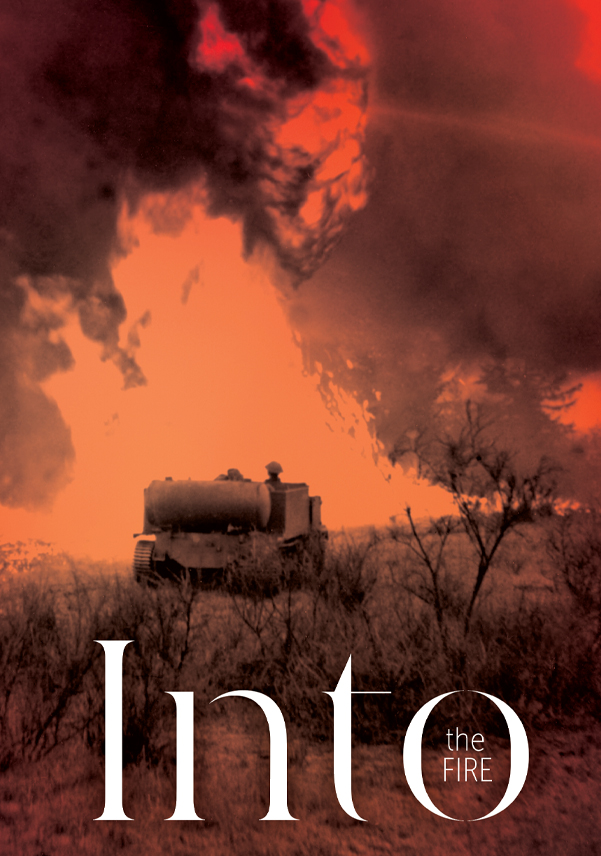 As the Korean winter gave way to an early spring and UN forces pushed slowly but steadily north, the PPCLI were sorely tested in mountain fighting, ambushes and Chinese hit-and-run attacks

The war was one of continual patrols and a series of fierce battles to take or retain strategic hilltops. Ambush and fighting patrols were called ‘snatch’ and ‘jitter’ patrols by the men. The battles were called hell.

On April 22, 1951, Chinese troops broke through Allied defences and headed for South Korea’s capital, Seoul. They would have to pass through the Kapyong Valley, defended by the Patricias, Australian troops and an American tank regiment, backed by New Zealand artillery.

After the Australians were overrun and driven back, it was the Canadians’ turn. Hand-to-hand fighting went on all night. “We were just 700…and we were attacked by…10,000 Chinese,” said Captain Hub Grey.

Captain John G.W. (Wally) Mills had his men dig in, then called for an artillery strike on his own position. Miraculously, the gunners’ 2,300 rounds missed the Canadians.

“It really saved our bacon…otherwise we would have been overrun,” said David Crook. “[We] fought for three days, completely surrounded…supplied by air…no mean feat.”

John Sadler, who fought at Kapyong and in the Third Battle of the Hook in May 1953, recalled Chinese scare tactics: They’d attack at night “in waves, one after the other…blowing whistles, bugles…yelling, screaming.”

But the Canadians held the line. The units at Kapyong were presented with the United States Presidential Unit Citation, represented by a blue shoulder flash on 2PPCLI uniforms.

Facing such resistance, the Chinese spring offensive petered out. But they’d be back. In November, the Van Doos were surrounded in the first battle for Little Gibraltar, and the RCR took the brunt of another attack in October 1952.

Troops with Princess Patricia’s Canadian Light Infantry, the first Canadian unit dispatched to Korea, board an American transport ship on Nov. 25, 1950. They arrived in Korea in December, then trained for eight months before joining the line in February.
DND; LAC/E011067472 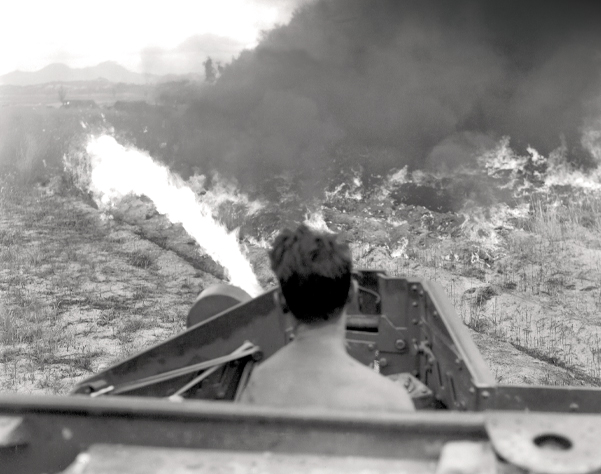 Fire streams from a Wasp in June 1951. A Universal Carrier with a flamethrower instead of a machine gun, this was an effective psychological weapon, causing enemies to flee from the advancing flames.
Bill Olson/LAC/PA-128870 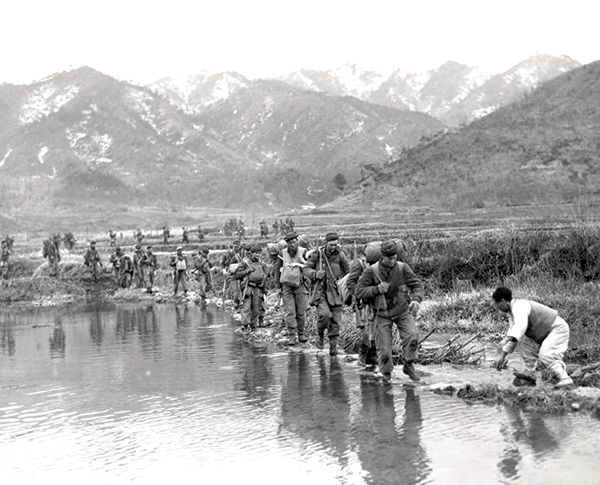 Patricias patrol a valley bottom in Korea in March 1951. Troops conducted fighting patrols and ambush patrols—called ‘jitter’ and ‘snatch’ by the men—one to get enemy soldiers to reveal their positions, the other to capture prisoners for interrogation.
LAC/PA-114888 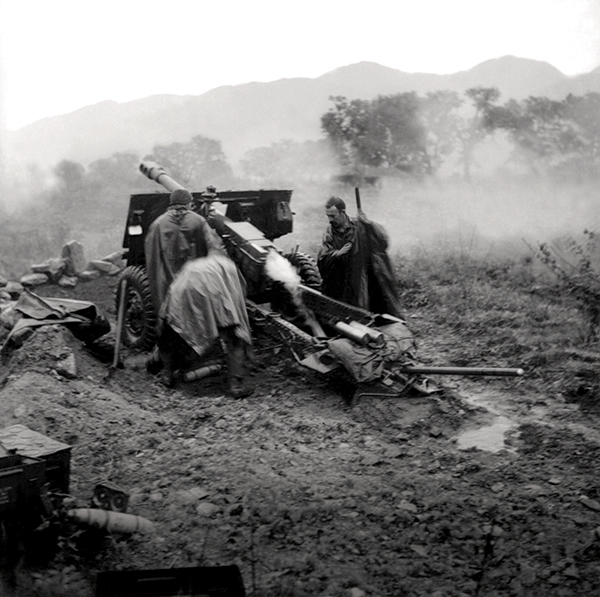 Fog and smoke surrounds a 25-pounder gun of the 2nd Field Regiment, Royal Canadian Horse Artillery, in action in May 1951. The infantry was also supported by an armoured regiment, combat engineers, a signal squadron, a transport company and the Army Medical Corps.
Paul Tomelin/LAC/PA-128802 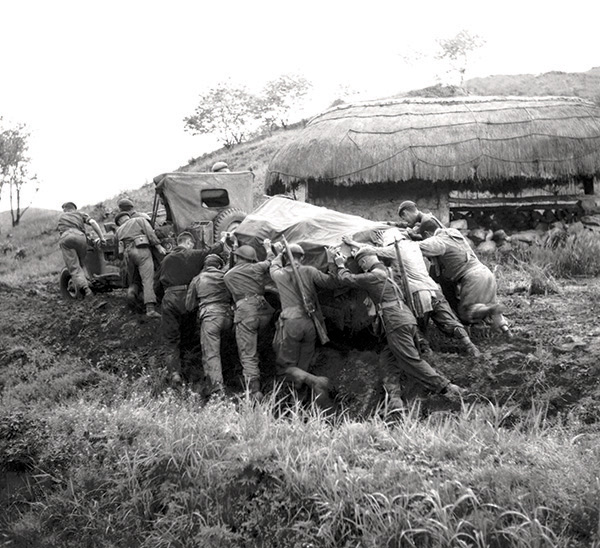 Soldiers push a jeep and trailer up a muddy slope. Troops and their military vehicles faced mountainous terrain and cold winter months.
PA-129117 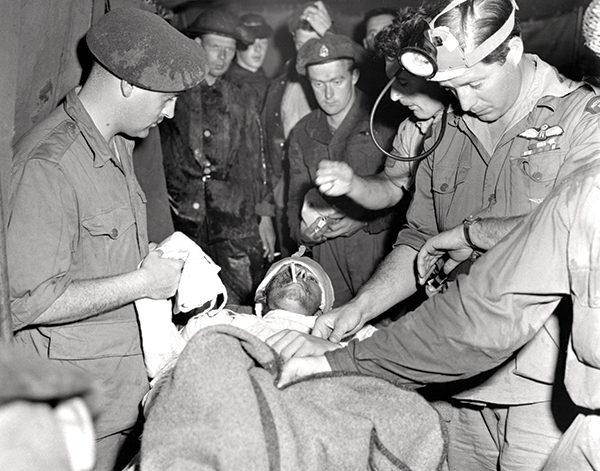 A severely wounded soldier gets first aid and a light for his cigarette as his pulse is checked in May 1951.
Paul Tomelin/LAC/PA-178947 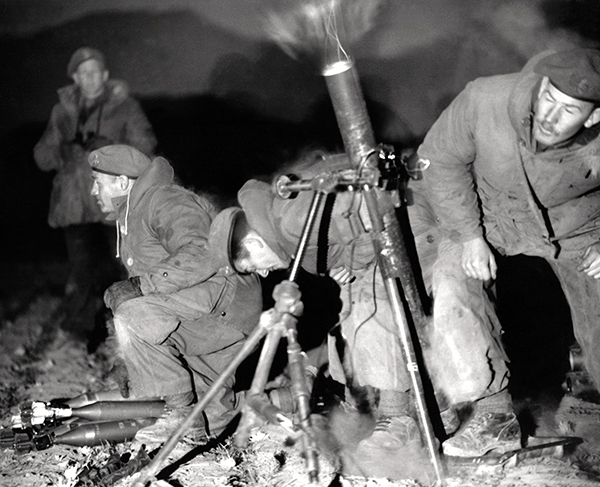 Privates John Joyal, Henry Hayward and Donald Beebe conduct mortar platoon training near Miryang in southeastern Korea in February 1951, training that soon would be tested in the Battle of Kapyong.
Bill Olson/LAC/PA-179973 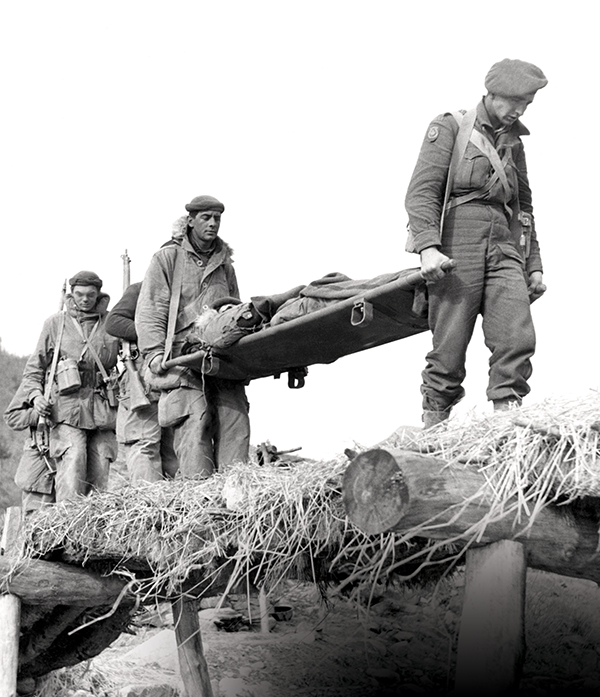 Stretcher-bearers Bob Campbell and Bob Bastien carry a wounded soldier across a log bridge during the Battle of Kapyong in April 1951. Canadian casualties in the battle included 10 killed and 23 wounded.
DND 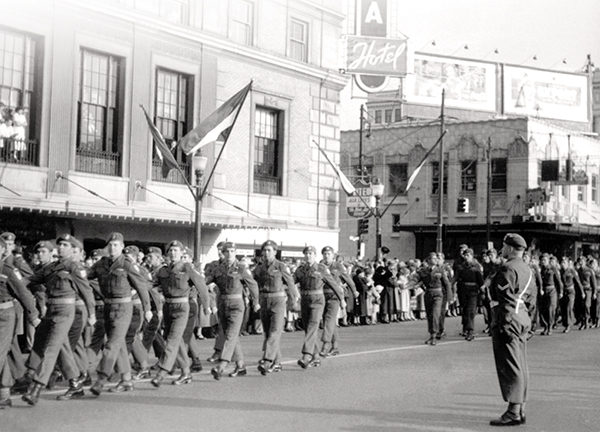