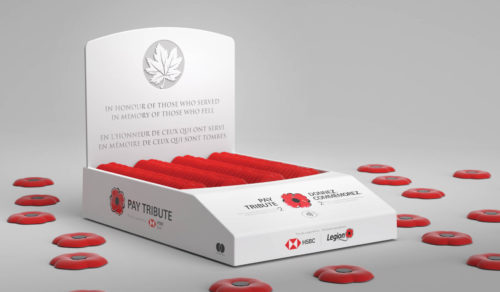 With your tap debit or credit card, you tap on the bright poppy image on the box and take a poppy. You have just made a $2 donation to the poppy fund.

Appealing to Canadians who no longer carry cash about them, HSBC Bank Canada worked with technology partners to ensure the program is in line with latest digital technology. The boxes work with tap-enabled debit and credit cards or mobile and wearable devices like Apple Pay by placing the tap card or pay technology device on the glowing poppy before removing a poppy from the box.

“We put out 250 boxes as a pilot project,” said Special Projects Officer Freeman Chute at Legion National Headquarters in November.

The HSBC Bank Canada “Pay Tribute” boxes were designed to reflect the shape of headstones of Commonwealth war graves and bear the words on the Halifax Cenotaph, “In honour of those who served, in memory of those who fell.”

“We are excited to present this new way to make it easier for Canadians to donate during the National Poppy Campaign,” said Dominion President Tom Irvine. “We are pleased to partner with HSBC Bank Canada on this innovative initiative and hope that it will grow in the years to come.”

The Pay Tribute boxes were distributed nationally across a network of HSBC Bank Canada branches as well as selected Royal Canadian Legion branches in Ontario. The branches also had them in other locations, such as Costco, Canadian Tire and Shoppers Drug Mart.

“The boxes that the branches place in stores send the money right to the branch’s poppy account,” said Chute.

“Another feature is that no information is actually stored anywhere on the machine,” he added.

“With a little ingenuity and care, we’ve been able to bring our team and partners to the table to design something that we think will continue to contribute to the success of The Royal Canadian Legion’s poppy campaign now and for years to come,” said Larry Tomei, Executive Vice-President and Head of Wealth and Personal Banking at HSBC Bank Canada. “It truly is a great honour.”