Home » Military History » Face to Face » Are there 98 Canadian VCs?

Are there 98 Canadian VCs?

It is hard to say exactly how many “Canadians” have been awarded the Victoria Cross, the Commonwealth’s highest award for valour in the face of the enemy. As an editor with Legion Magazine, we usually just say safely, “nearly 100.”

For one thing, the Canadian Citizenship Act didn’t come into effect until Jan. 1, 1947, nearly two years after the last action was performed for which a Canadian was awarded a VC. So by that measure, the majority of “our” VCs were, technically, not Canadian at all. Newfoundland was not part of Canada until 1949, yet we still take pride in the VCs earned by John Bernard Croak and Thomas (Tommy) Ricketts.

Many of the recipients were immigrants, mainly from Great Britain. Some of them returned to Britain to serve in units they had been associated with before coming to Canada. Others were Americans who came north to enlist in the Canadian Army when their own country was still neutral in the First World War. We know others came from Ukraine and Denmark.

Some of the 98 men also considered themselves British, Irish, American, Ukrainian or Danish.

That number was arrived at by Legion Magazine editors in consultation with historian Arthur Bishop, son of VC recipient Billy Bishop, for an 18-part series that ran in the magazine between 2004 and 2006.

To qualify, a person would have to fit one or more of these criteria:

• be serving in the Canadian military at the time of the deed;

• have been born in Canada, its territories or Newfoundland;

• have established a permanent residence in Canada, its territories or Newfoundland prior to the service in which the action was performed;

• or been resident in Canada, its territories or Newfoundland prior to the outbreak of the war in which the action took place.

With those criteria in mind, Bishop went ahead and wrote the series under the belief that there were 96 Canadian recipients. In response to correspondence from readers, however, the editors accepted that two more had been unfairly omitted and added a postscript to the series. 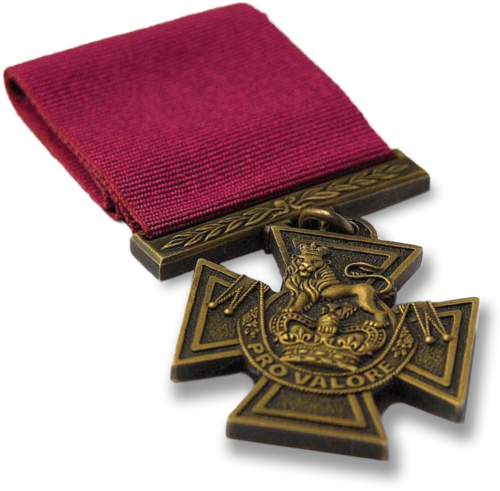 Raymond de Montmorency was born in Montreal but served in the British Army in Sudan. During the Battle of Omburman on Sept. 2, 1898, he was part of a cavalry force that helped deliver a decisive victory for the outnumbered British Army facing 52,000 Mahdist warriors. However, the British were armed with machine guns and artillery, while the enemy had only rifles and spears, a prelude to what warfare would be like in the 20th century. Montmorency was later killed in action in Cape Town, South Africa, in 1900.

Victoria-born John Sinton was a medical doctor in the Indian Medical Service and an expert on malaria. On Jan. 21, 1916, he was at the Orah Ruins in Mesopotamia (modern day Iraq) where he showed great courage caring for the wounded under heavy fire. Even though he was wounded himself, he continued to tend the men during the fighting.

No doubt, some of the 98 men also considered themselves British, Irish, American, Ukrainian or Danish. We consider them Canadian and are proud of them.

Of the 1,358 Victoria Crosses (VCs) awarded to date in the British Commonwealth, 628 were granted between 1914 and 1918 during the First World War. Depending on the criteria used, some published sources claim more than 70 Canadian VC recipients in the Great War alone, while others claim 64. By the latter count, there are fewer than 98 Canadian VC recipients in total.

Some use criteria for a Canadian VC recipient that include being a member of a Canadian military service, being born in Canada, and/or being a resident of Canada. The second and third criteria imply someone had not necessarily worn a Canadian uniform at the time of the VC deed.

This means a soldier serving in a British battalion would qualify as a Canadian VC recipient if the soldier had been a resident in Canada prior to the war.

For instance, Michael O’Leary immigrated to Canada in 1913 and worked in Saskatchewan for 13 months, returning to the U.K. to enlist in the 1st Battalion, Irish Guards. O’Leary was awarded the VC for his act of valour on Feb. 1, 1915, on the Western Front. Recruitment posters hailed him as an Irish hero. His act of bravery occurred two weeks before the 1st Canadian Division entered the trenches for the first time, at Armentières. O’Leary, along with Edmund de Wind, Thomas Wilkinson and Rowland Bourke, served in British military units but all are regarded as Canadian VC recipients if Canadian residency alone is an acceptable criterion.

All served in British military units but are regarded as Canadian VC recipients.

If these three are deemed Canadian VC recipients, then logically 29 members of the Canadian Expeditionary Force awarded the VC—such as Hugh Cairns, George Pearkes and James Richardson—rightly should be identified as British VC recipients since they were born in the U.K.

However, if the criteria for a Canadian VC is serving in the Canadian military, regardless of citizenship and residency, or being seconded for duty with a non-Canadian military unit (the Royal Flying Corps or the Royal Air Force, for example), then the number of First World War Canadian VC recipients is reduced to 64. This means members of the CEF (regardless of country of birth or domicile) and those Canadian-born who served in Britain’s air force are valid Canadian VC recipients.

In 1919, Lieutenant-General Arthur Currie retained a nominal roll of all Canadians awarded the VC. This contained 62 members of the CEF, including Billy Bishop (seconded to the RFC), William Barker (served in the RAF) and Alan McLeod (served in the RFC). These straightforward First World War VC criteria (essentially a Canadian cap badge, collar badge or shoulder title) remain valid a century later. 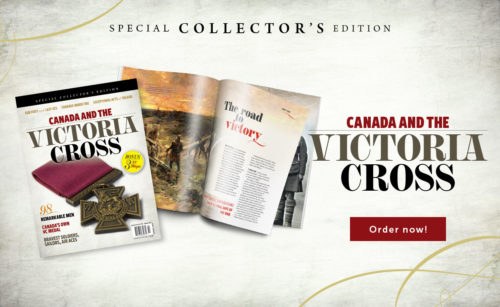 PrevPrevious ArticleChoose our cover for the next issue of Legion Magazine!
Next ArticleRising social media censorship hampers war-crimes investigationsNext