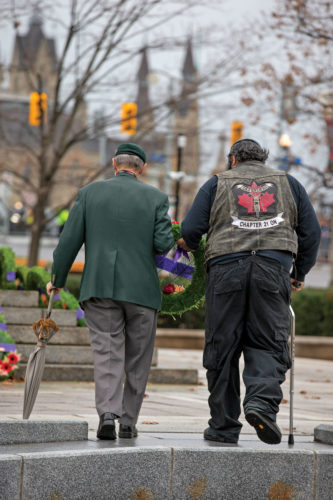 Remembrance Day 2020 in Ottawa was different but no less poignant

The wreaths were almost all placed beforehand, 379 of them neatly lined up in rows at the base of the National War Memorial in Ottawa, each bearing the words Lest We Forget/Nous Nous Souviendrons in gold on purple ribbons.

Chairs were spaced several metres apart for a handful of guests and veterans expressly invited to attend the Remembrance Day 2020 ceremony. The usual crowds were not there; only a few of the faithful lingered on the margins.

In fact, The Royal Canadian Legion, which produces the annual service, discouraged people from attending in the midst of the worst pandemic in a century.

The new challenges wrought by COVID-19, so evident in the gaps surrounding the ceremony on Nov. 11, did not escape the oratorical exploration of the honorary chaplain of the Legion, who seized on it in his annual benediction, an inevitably absorbing discourse which never fails in its originality and poignancy.

“Who delivered once again in a time of national crisis? Our soldiers.”

“Our veterans, whom we remember today and always, they chose to fight for our country, for our freedom, knowing that it meant separation from family—in many tragic cases, a permanent separation.”

Bulka likened the virus to “an enemy you cannot see” and noted that it takes teamwork to overcome such enemies.

The Canadian Armed Forces announced in October that 222 personnel had contracted the virus, although it is not known how many were among the 1,600-plus deployed last spring to long-term care facilities in Ontario and Quebec. Figures at the time linked 55 cases to their work in care homes. 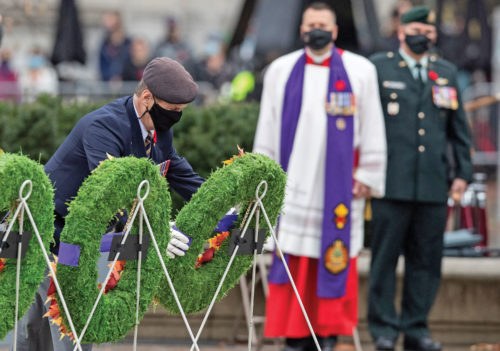 Staged on an unseasonably warm, damp day, the nationally televised ceremony followed its annual sequence through “The Last Post,” “The Lament,” “The Rouse” and the Act of Remembrance, delivered in English by Legion President Tom Irvine, in French by Grand President Larry Murray, and in Algonquian by Indigenous veteran Aurel Dubé.

There was no choir, no long line of wreath-bearing veterans and diplomats, no parade, and only a few poppies placed atop the Tomb of the Unknown Soldier. 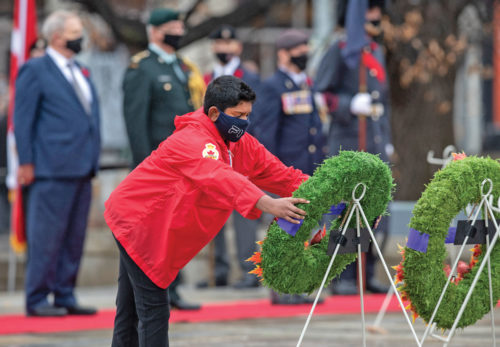 Baiza Kene of the Ottawa Children’s Choir places a wreath on behalf of the youth of Canada.
Stephen J. Thorne

The Central Band of the CAF accompanied Baiza Kene of the Ottawa Children’s Choir in the national anthem. A 21-gun salute fired from Parliament Hill reverberated off the surrounding buildings.

Major-General Guy Chapdelaine, Chaplain General of the CAF, delivered prayers. A flyover by vintage aircraft was cancelled due to heavy crosswinds and low clouds.

The senior winners of the Legion’s annual national poster and literary contests usually place a wreath on behalf of the youth of Canada. They could not make the trip this year, however, and choir member Joshua Naveen did the job. 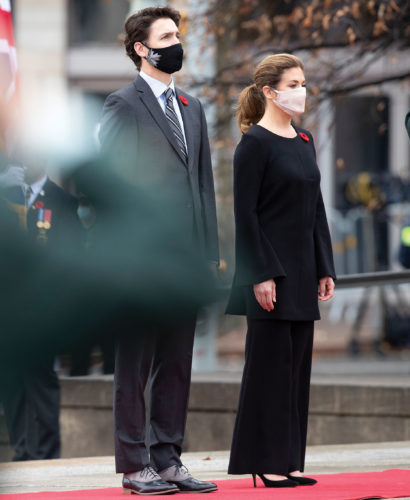 Sullivan lost her son Christopher Saunders, a navy lieutenant, in the 2004 fire aboard the submarine HMCS Chicoutimi. She is the first navy Silver Cross Mother in 27 years. Isabella Hutchings of Newfoundland was the previous and only other navy mom among the 78 Silver Cross mothers named since the honour was first bestowed in Canada in 1936.

Sullivan said her son’s portrait hangs in her living room and she speaks to him every day “as if he were in the room.”

“I tell him about my day,” she said in an interview with Legion Magazine. “If I’m upset about anything, about my feelings about him being gone, I talk to him. I feel that he’s there with me and can hear me, and I feel better just releasing it all to him.”

During at-sea repairs on Oct. 5, 2004, a massive wave poured about 2,000 litres of seawater into two of Chicoutimi’s open hatches. Almost 10 centimetres of water collected in the captain’s cabin and another five in the control room, sparking an electrical fire that spread and engulfed the sub in thick, black smoke. Saunders died of smoke inhalation shortly after. Eight other crew were injured.

Former master seaman James Sookbirsingh was an electrician on Chicoutimi. He was at the ceremony, representing the Submariners Association of Canada. 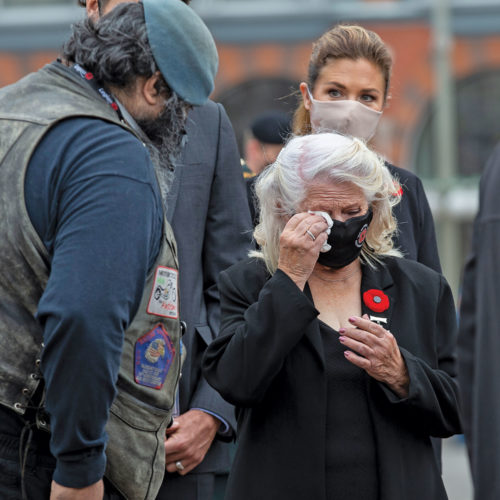 Debbie Sullivan, the 2020 National Memorial (Silver) Cross Mother, dabs a tear after being shown a tribute to her son Lieutenant Chris Saunders, who died after a 2004 fire aboard the submarine HMCS Chicoutimi.
Stephen J. Thorne

“It was a rough time,” said the bearded biker, who placed a wreath at the ceremony with Korean War veteran Bill Black. “Most of us made it out, but the reason I’m here is the one that we lost.”

Sookbirsingh had been in touch with Sullivan, and the two spoke in person for the first time on Nov. 11. The crewman brought her to tears with a picture of his motorcycle, which includes an engraved tribute to Dolphin 38—code for the credo “Diesel boats forever”—and his crewmate that reads “I ride in memory of Chris Saunders.”

Only a few of the faithful lingered on the margins.

Sookbirsingh described Saunders as a “dedicated, great guy” admired by virtually all his 58 crewmates aboard Chicoutimi. “He was somebody we all looked up to,” he said. “When he entered a room, you couldn’t help but smile.

“When you’re down in submarines, you’re a very tight group. So you get to know people. I’ve never heard anybody say anything bad about the guy, living or dead.”

“He gave me some answers that I’ve been wanting to hear for 16 years,” said Sullivan, who aims to use her tenure to advocate for veterans and reach out to as many Silver Cross mothers as she can. “It was closure for me.” 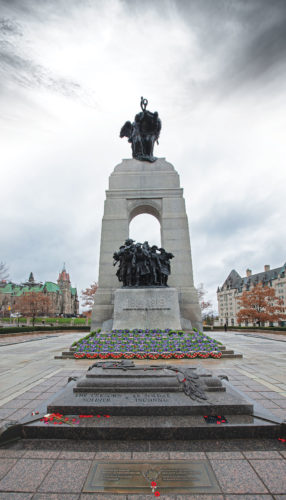 Wreaths surround the National War Memorial (below) prior to the Nov. 11 ceremony.
Stephen J. Thorne

The crowd at the National War Memorial for the national Remembrance Day service this year may have been small because of pandemic restrictions, but wreaths were present in abundance.

The Legion’s National Headquarters in Ottawa asked people to stay at home as local health restrictions limited participation in the ceremony. People were encouraged to watch the ceremony on television or Facebook. But if they wanted another way to participate, they could buy a wreath.

“The wreaths are a visual symbol that Canadians are still thinking of our veterans and remembering their countless sacrifices,” said national ceremony director Danny Martin. “All proceeds will go toward the Legion Poppy Fund in support of Canada’s veterans and their families.” 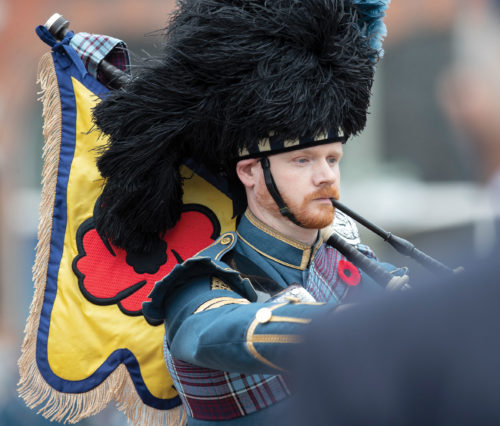 Corporal Dave Zarboni of the RCAF Pipes and Drums played “Flowers of the Forest” at the national Remembrance Day ceremony.
Stephen J. Thorne

Each wreath with a ribbon saying Lest We Forget/Nous Nous Souviendrons cost $150 plus tax. Once a wreath was ordered, it was held at Legion House until Remembrance Day. They were then placed around the war memorial before the ceremony.

Anyone who wanted to place a wreath at a local cenotaph was encouraged to contact their local Legion branch.

“There were 379 wreaths pre-placed around the memorial,” said special projects officer Freeman Chute. “There were more than 400 by the time the ceremony ended. More wreaths were placed there by the public after the service was over.”

The wreaths were respectfully removed the next day. 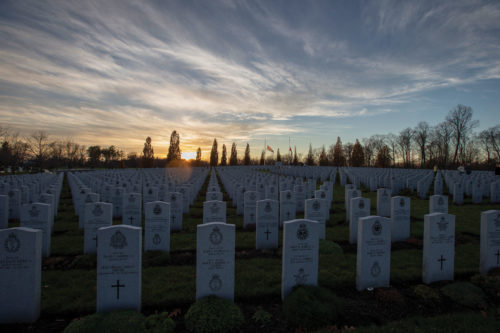 The going down of the sun at the National Military Cemetery in Ottawa on Nov. 11, 2020.
Stephen J. Thorne

In addition to the scaled-back national Remembrance Day service in Ottawa, Legion branches in communities across Canada found unique ways to commemorate veterans without large gatherings. Some videotaped downsized ceremonies in advance then posted them on Nov. 11. Others live-streamed theirs.

At the Grand Parade in Halifax, invited guests only were permitted within the cordons. The event was live-streamed by CBC Nova Scotia. The public was free to place poppies at the cenotaph in the afternoon.

At Montreal’s cenotaph in Place du Canada, participants and dignitaries were subdued and socially distanced. Veterans were saddened they couldn’t attend the ceremony, Kenneth Ouellet, president of Quebec Provincial Command, told CTV. “But we’re living in changing times and we must adapt.”

Similar small, sombre ceremonies took place in other communities across Canada, from Stratford and Sudbury to Summerland and Fort Smith, some filmed in advance and others broadcast live online. Here are links to a few: