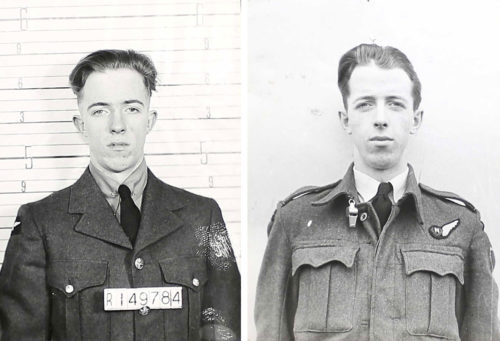 Twins Grant (left) and Roy Campbell of Regina died a month apart in the spring of 1944.
DND
A new exhibition at the Canadian War Museum relates the personal stories of dozens of Canadians who had roles in the Second World War, but it is the story of Regina’s Campbell brothers that struck a particular chord with historian Tim Cook.

The twins, Pilot Officer Alexander (Grant) Campbell and Flying Officer Robert (Roy) Campbell, both navigators aboard Lancaster bombers, were killed a month apart—Grant on April 11, 1944; Roy on May 13. They were 21 years old.

“I can’t imagine the grief and the sorrow of their parents,” said Cook, the exhibition curator and author of 13 books on Canada’s military history.

Their parents, Rev. Harvey Campbell and novelist Grace Campbell, travelled to Europe from their home in Montreal in July 1947 to visit their sons’ graves—Roy’s in Adegem Canadian War Cemetery in Belgium and Grant’s at Cambrai Communal Cemetery in France.

There are stories of heroism, resolve, tragedy and triumph.

In a subsequent letter to Air Vice-Marshall Ralph E. McBurney, a fellow Montrealer and senior air force liaison officer in London, Rev. Campbell described how they met a Msr. Ansclet, a gendarme who was the first to reach Grant’s crashed plane.

He took the couple to the crash site at Hausey, 13 kilometres east of Cambrai, and told them Grant and the RAF pilot, Flight-Lieutenant Frank Barnsdale, lay side-by-side, their bodies intact, “exactement ici.”

“He gave us part of his parachute, and the remnants of the map and purse he took from his hand,” wrote Campbell. “The purse is unmistakably the one we gave him for Christmas the year before he enlisted in the RCAF.” 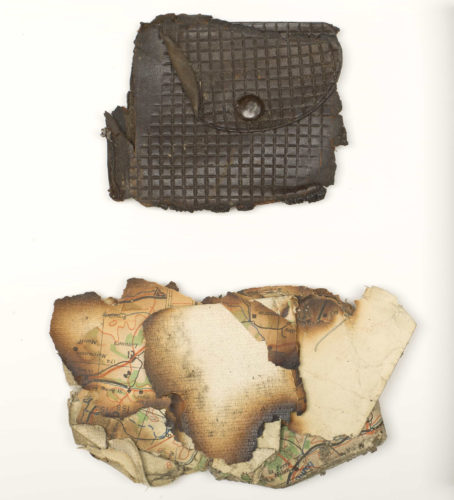 The purse, the charred map, and the parachute piece are on display in the exhibition, which opened Dec. 4.
CWM
Assembled to mark the 75th anniversary of the war’s end, the exhibition contains 175 objects, including personal letters and photographs, diaries, film clips, archival images and documents, war art, uniforms, medal sets and other items gleaned from the museum’s 500,000 artifacts—half of which have been collected since the CWM opened at its current location on the 60th anniversary of VE-Day in 2005.

There is war bride Gwen McDonald and factory worker Albert Socqué, liberated Dutchman Bert Kahrel, who emigrated to Canada, and Michiko (Ishii) Ayukawa, who as a 12-year-old Japanese-Canadian was forced into an internment camp at Lemon Creek, B.C.

There is Pilot Officer Doug Sam, who was shot down and survived the war hiding among the French, and Ethel Rogers Mulvany, a civilian captured during the fall of Singapore and held by the Japanese in Changi prison for the duration.

“You’ve to talk to veterans and, increasingly, you’ve got to talk to their children.”

Mulvany spent much of her time behind the prison walls trading recipes with other prisoners, then produced a cookbook after she was freed and returned to Toronto. It sold 20,000 copies. A copy of the cookbook is on display along with the Bible she read throughout her incarceration, its spine frayed by the starving woman’s efforts to eat the glue that bound it together.

There are stories of heroism, resolve, tragedy and triumph, touching on the depth and breadth of the Canadian experience through words, pictures and artifacts.

“There are a lot of really powerful stories,” said the prolific Cook, who for more than 20 years has reveled in the “detective stories” he discovers in the museum archives as he sifts through letters, diaries, reports and records that often haven’t been touched in decades. He is the museum’s acting director of research.

“You’re piecing together the history at the coalface and, often, in a material culture or museum environment, it’s those objects—those really powerful objects—that tell stories or have stories embedded in them or wrapped around them. They don’t speak for themselves—you’ve got to research that; you’ve to talk to veterans and, increasingly, you’ve got to talk to their children.” 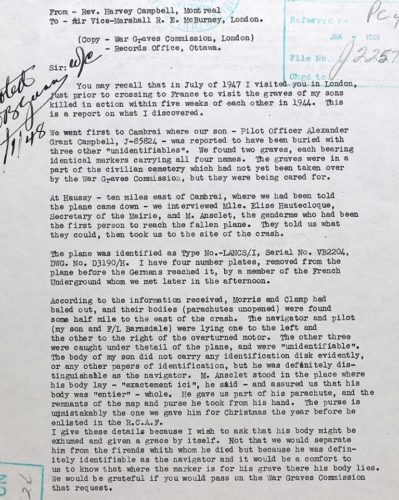 (Click on letter to enlarge) Rev. Harvey Campbell’s letter describing the pilgrimage he and wife Grace made to their sons’ gravesites in Europe.
Operation Picture Me/VAC
On what amounted to a pilgrimage to the places where his two sons died, Rev. Campbell discovered that Grant, who enlisted a month after his brother in January 1942, was buried in one of two graves, each bearing identical markers with four names of crew who could not be identified.

In his letter to McBurney, he noted that his son carried no identification disk or any other documentation but, given his location next to the pilot and the materials recovered—particularly the purse and the map—it could only have been his son.

“I give these details because I wish to ask that his body might be exhumed and given a grave by itself,” he wrote.

“I give these details because I wish to ask that his body might be exhumed and given a grave by itself.”

“Not that we would separate him from the friends with whom he died but because he was definitely identifiable as the navigator and it would be a comfort to us to know that where the marker is for his grave there his body lies.”

Three years later, in a letter written Jan. 20, 1951, an RCAF casualties officer, Wing Commander Wilfred Gunn, informed Campbell that his son now had a grave of his own: Plot 1, No. 14, Row A. Only two of the RAF crew remained unidentified and still shared a plot: Flight Sergeant Ernest Charles Edwards, bombardier, and Sgt. James Torode, the flight engineer.

“I would like to take this opportunity to again express my deepest sympathy in the loss of your gallant sons,” Gunn concluded.