Keeping the peace along the Suez Canal 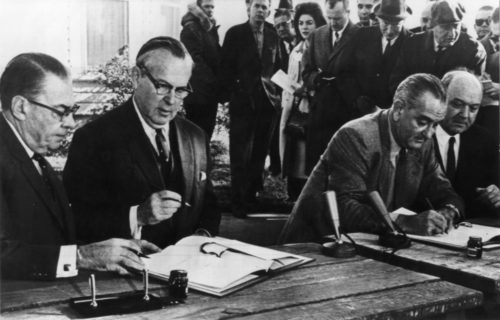 Lester B. Pearson (second from left) proposed a United Nations peacekeeping force to ease tensions on the Suez Canal.
NATO Association of Canada
After decades of disagreement, Egypt nationalized and seized control of the Suez Canal in July 1956, sinking ships to plug the shipping route between the Mediterranean Sea and the Red Sea.

The canal had been regulated and operated under an international system since the Convention of Constantinople of 1888. The British considered the canal crucial, its closure an economic threat. France backed its ally Israel, whose cargo ships traversing the canal had been routinely searched and seized by Egypt.

Britain, France and Israel attacked Egypt at the end of October. Egypt appealed to its ally, the Soviet Union, whose response was to threaten to use nuclear weapons unless the attacks stopped.

As allies on both sides lined up to lend support and an international conflagration loomed, a Canadian diplomat pulled the world back from the brink of war.

A Canadian diplomat pulled the world back from the brink of war.

Canada did not want to see an international armed conflict barely a decade after the end of the Second World War and three years after the Korean War. And it worried that military action against Egypt was dividing the Commonwealth and damaging relations with the United States.

When diplomacy failed, Canada’s secretary of state for external affairs, Lester B. Pearson, proposed British, French and Israeli troops withdraw, and the United Nations develop an armoured peacekeeping force to stabilize the area.

Pearson knew well the costs of war, having served as a stretcher-bearer and in the Royal Flying Corps during the First World War, and as a diplomat in Washington and London during the Second World War. 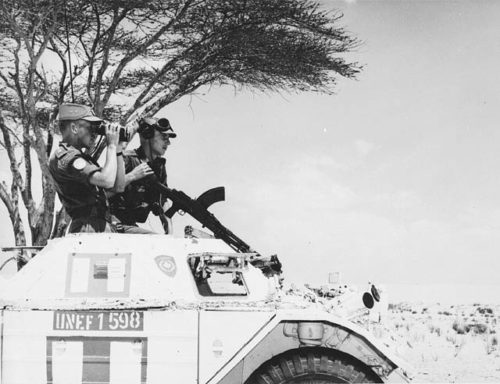 Canadian members of the United Nations peacekeeping force watch over the border between Israel and Egypt in 1962.
LAC
By the end of November, the United Nations Emergency Force was in place in Egypt. Ten countries contributed a total of 6,000 peacekeepers, commanded by Canadian Major-General E.L.M. Burns.

British and French troops were evacuated from Egypt on Dec. 22. Israeli forces withdrew in March 1957. UN Peacekeepers remained in the region until 1967.

Pearson was awarded the 1957 Nobel Peace Prize, although he was criticized at home for not supporting Britain.

Pearson espoused an independent role for Canada in world affairs and established Canada’s national reputation as an advocate for peace. Canadian peacekeepers were deployed to hot spots around the world for decades to come.

PrevPrevious ArticlePropaganda for Christmas
Next ArticleMerry Christmas to all, and to all a good fightNext