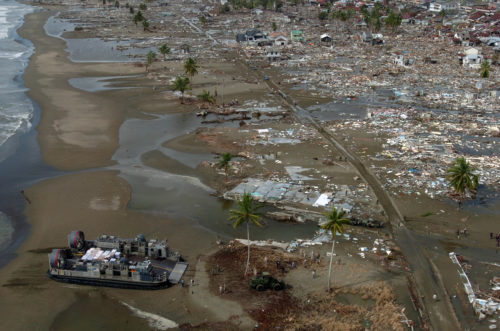 A hovercraft from USS Bonhomme Richard delivers supplies to Indonesia after the 2004 tsunami.
Wikimedia
Early on the morning of Boxing Day in 2004, a fault in the earth’s crust ruptured under the Indian Ocean off the west coast of Sumatra, Indonesia.

The massive earthquake caused a tsunami, with waves up to 30 metres high racing toward communities along the coastline. A quarter-million people in 14 countries were killed. Televised images of the deadly waves and devastated communities shocked the world.

Canada had people on the ground there within a week.

On Dec. 30, an international reconnaissance team including a dozen Canadians went to Sri Lanka to begin planning logistics for the massive humanitarian aid effort. More than 30,000 Sri Lankans were killed and about half a million displaced by the tsunami.

It was decided the Canadian Forces Disaster Assistance Response Team (DART) would be concentrated in the hard-hit area of the Ampara region of Sri Lanka, where at least 10,000 people died and about 180,000 were forced from their homes.

“We helped thousands and thousands of people,” said Lieutenant-Colonel Michael Voith in a Toronto Star interview after returning home in February 2005 from the 40-day mission. “If we hadn’t provided them with water and medicine, what would have become of them? It’s not possible to place a price on these things.”

“If we hadn’t provided them with water and medicine, what would have become of them?”

Captain Carmen Meakin was touched by the psychological devastation. “We could have every medication that there is, but none of those are going to help,” she said in a Feb. 2 interview in the Saskatoon StarPhoenix. “All you can do is listen to them, help them in any way that you can.”

Troops went through their own emotional issues. “There is a lot of devastation that we see,” Corporal Angela Townsend said in an interview in the Cape Breton Post. “You have to talk about it and you have to download.”

“Our hearts have been impacted huge,” Capt. Jim Hardwick said in a Toronto Star interview. “We probably gave people some hope—but they gave us hope, too.”

PrevPrevious ArticleMerry Christmas to all, and to all a good fight
Next ArticleA new voice for veteransNext