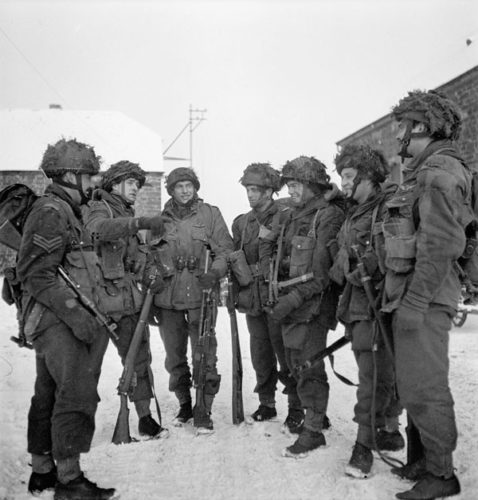 Paratroopers of the 1st Canadian Parachute Battalion prepare for a patrol in Belgium in January 1945.
Sgt. C.M.G. Lattion/DND/LAC/PA-191136
When bad weather interfered with air reconnaissance on Dec. 16, 1944, the Germans took advantage to launch a surprise attack on a weak point in Allied lines in the densely forested Ardennes region of eastern Belgium and northeastern France.

The plan was for more than two dozen divisions to split the lines, take Antwerp, Belgium, squeeze shut the Allied supply line, encircle and capture the British and American armies, and force a negotiated end to the war.

German troops and tanks initially created a 65-kilometre gap in Allied lines. But they encountered more resistance than expected in the bloody Battle of the Bulge, Germany’s last major offensive campaign on the Western Front during the Second World War.

The Americans bore the brunt of the assault, but some Canadians did take part in the battle.

Six Canadian forestry companies working in the Ardennes were surprised by the assault, forced to abandon 21 sawmills that had supplied timber for rebuilding bridges and roads. Some were able to clear out, others helped hold the front line.

On Christmas Eve, the RCAF started low-level strafing attacks on enemy armour, losing seven aircraft the first day. The 1st Canadian Parachute Battalion was sent along with British reinforcements—by ship because the weather too foul for an airdrop.

“You roamed around and every shadow and every tree, you visualized it was a German.”

“We went over Christmas Day from England to Belgium,” Jim Kingsley recalled in a Memory Project interview. After a big holiday luncheon, they boarded ships for the mainland. “We always said they had fed us up good, for the kill.” On Jan. 3, they were cleaning out pockets of German resistance in Rochefort, Belgium.

“We went into a house down by the river, our platoon…about 10 guys,” said Kingsley. He set up his Bren gun in the living room at a window facing the river and a bridge. “I didn’t have to shoot very often.” Groups of two or three paratroopers would take cover in a slit trench by the bridge, discouraging enemy troops from crossing the river.

“A rumour went around that…the Jerries had taken Canadian uniforms and parachuted in behind the lines,” recalled Fred Allison, who was detailed to stop every vehicle at a bridge. “It seemed such a hopeless task. If it was a Canadian, he’d stop. But if it was one of the Jerries, he was just going to speed up, and being alone, your body wouldn’t even be found until the morning.”

He was often frightened. “You got so scared that you had to grab a hold of yourself, especially at night on a roving picket, where you roamed around and every shadow and every tree, you visualized it was a German. But you had to get used to that.”

That, and the frigid temperatures.

“That was a cold, cold winter, cold as I’ve ever felt,” recalled Harold Elliott. But that didn’t impede his battle sense. “They had rifles, I had rifles; they had guns and I had guns, machine guns. And when they ran, I took their ammunition, and I used their ammunition to get them.”