Home » Health » A military response to the pandemic

A military response to the pandemic 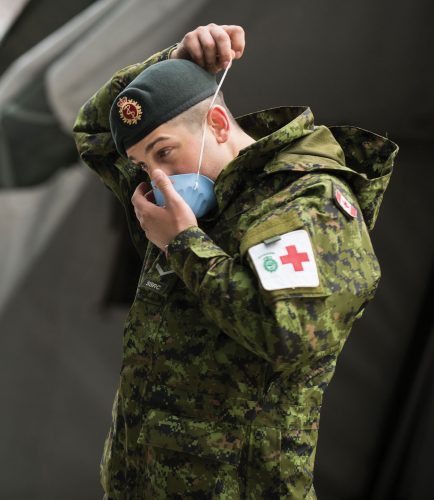 Truly, the Canadian Armed Forces has to be ready for anything.

It has to be ready to respond quickly to domestic and international emergencies and natural disasters, while simultaneously keeping our borders safe—no matter how many personnel might be out sick.

Throughout most of history, more troops have died from disease than in battle; Canada broke that sorry tradition in the First World War. It was among the first to embrace vaccinations and to make hygiene and sanitation a command responsibility, resulting in lower rates of sickness and fewer deaths from infectious diseases.

The importance of maintaining a healthy force was brought home in March when several global military commanders went into self-quarantine. Russian aircraft began stepping up the number of patrols that skirt other countries’ airspace, likely probing to see if the pandemic had diverted attention from air defences.

In Canada, it hadn’t. RCAF jet fighters from Cold Lake, Alta., along with U.S. fighters, escorted interlopers from Norad-protected airspace—as they have done many times since.

Meanwhile on the ground, the CAF was just as vigilant.

By mid-January, air travellers had spread the coronavirus from China to neighbouring countries. COVID-19 arrived in Canada by month’s end and by the end of February was spreading through communities.

On March 2, the CAF activated Phase 2 of Operation Laser, its contingency plan for pandemic response. On March 8, Canada recorded its first death.

Prime Minister Justin Trudeau entered voluntary quarantine on March 12 along with his wife Sophie Grégoire, who contracted the virus during a speaking engagement in England. Civil authorities restricted travel, closed schools and limited size of gatherings. The federal Quarantine Act was invoked.

Phase 3 of Operation Laser began March 13. Across the country, as citizens went into physical isolation, the military ramped up plans to prevent erosion in its ranks from soldiers, sailors, aircrew and support staff or their family members contracting the virus. Non-essential gatherings and travel were cancelled and personnel worked from home where possible. The military was poised for quick response to requests from civil authorities. Nearly 1,600 troops were deployed to help at 30 overwhelmed long-term care homes in Quebec and Ontario (55 contracted COVID-19, and all recovered).

When the CAF learned in July that a member had come into contact with an infected person, it turned around a flight carrying troops for a NATO mission in Latvia, to avoid spreading the disease there.

The Royal Canadian Navy recalled ships from missions in the Caribbean and Africa to limit sailors’ exposure to the virus, and to preserve at-sea readiness. In order to avoid exposure on commercial flights, the RCAF airlifted hundreds of military personnel home in March and created a COVID-19 strategic response team.

How different things were a century ago, when Canada lost 50,000 people in three waves of Spanish influenza between 1918 and 1920. The military played a huge part in spreading the disease across the country in just five days. Influenza spread among soldiers on a train headed from New Brunswick to the West Coast. Sick soldiers and train crew were offloaded at every station stop, seeding the pandemic province to province.

First World War trenches were ideal incubators. Nearly 46,000 Canadian soldiers overseas sickened and 776 died, while nearly 12,000 were infected in Canada and 400 died, says the history of the Canadian Army Medical Service. But not all cases were reported, so numbers were probably higher.

“Some lessons from the Canadian experience of 1918 are valuable in 2020 as the CAF confronts the COVID-19 outbreak,” said Robert C. Engen in an article in the Journal of Military, Veteran and Family Health. He studied records of 685 of the 5,542 Canadian Corps pandemic deaths between mid-September 1918 and the end of the war.

The first lesson is that social distancing works. First World War infantry units were dispersed along the front and men were not evacuated if they contracted the flu. The infantry had lower mortality rates than engineer and railway units who were part of the evacuation chain and came into close contact with more infected people. Multiple contacts contributing to a higher viral load “may be what discriminated mild cases…from the severe cases that developed bacterial pneumonia,” said Engen.

Quarantine also works. Canadian medical authorities were wary of the disease spreading to the Canadian Corps in France. Reinforcements from Aldershot in England were segregated for two weeks, thus preventing transmission to the troops in France, which had a lower toll from Spanish flu than other nations’ troops.

Leadership is no less important today, to the CAF and public alike, when it’s not known if this pandemic will also come in waves, whether it’s possible to contract the disease twice, whether the virus will mutate into a milder or more virulent form, or if an effective vaccine can be developed.

Family, friends, commanders and colleagues gathered in Ottawa this week to bid a final farewell to Sheila Anne Hellstrom, a Royal Canadian Air Force veteran and the first woman to reach the rank of brigadier-general in the Canadian Armed Forces.