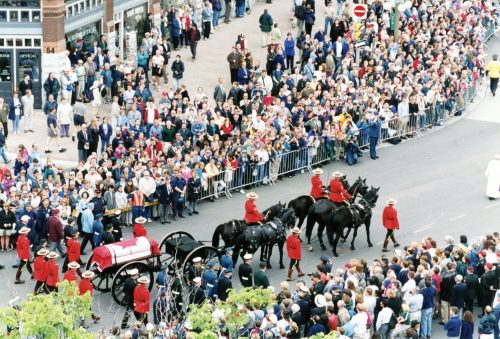 Almost a quarter century ago, The Royal Canadian Legion spearheaded in the creation of the Canadian Tomb of the Unknown Soldier. The remains of an unidentified Canadian soldier of the First World War was reinterred with military honours at the National War Memorial in Ottawa on May 28, 2000, an event that would change the face of remembrance in Canada.

In one of his first acts as dominion secretary of the Legion in 1996, retired brigadier-general Duane Daly attended a conference in South Africa. Daly, a Royal Canadian Air Force veteran, had never walked the hallowed ground of a Canadian battlefield cemetery. In South Africa, he visited several, and they were not what he expected.

Immersing himself in the history of Canada’s role in the Boer War, Daly sought out Canadian military graves around Cape Town. He found war dead buried where they fell, their plots—often single graves in farmers’ fields—marked by the granite stones that had served as ballast aboard the ship that brought them there.

“An area would be empty except out in the middle of this pasture would be this huge piece of granite, and it was the tombstone of a Canadian soldier,” Daly told Legion Magazine. “It left a deep impression on me. It really struck a chord of remembrance for me.”

Daly returned to Canada and proposed the Tomb of the Unknown Soldier at the National War Memorial in Ottawa. The Legion embraced the idea. Daly rallied support and tapped expertise, taking what seemed at times an impossibility and making it a reality.

The United Kingdom and France consecrated their tombs on Armistice Day 1920. More than 50 countries, including the United States, followed suit. But not Canada.

The question of why nagged at Daly, who launched his own inquiry into the matter. His research landed him at a single, simple conclusion: no Canadian government was “ever interested in establishing that sort of a tribute to the veterans.… They were quite happy to say that [Britain’s] Tomb of the Unknown Warrior…served for the whole Commonwealth.”

The initial budget was $500,000. It ended up costing almost $2 million, much of it from federal coffers, but not because the federal cabinet endorsed the endeavour. It didn’t.

Daly says departmental budgets were arranged to ensure that it was adequately funded.

The list of contributors is long, but Daly named three public servants as key supporters of the initiative: Gerry Wharton, director ceremonial at Public Works and Government Services, came up with the design concept; Brad Hall of the Canadian Agency of the Commonwealth War Graves Commission, led the remains recovery at Vimy, France; and Marc Monette, director of Public Works, Parliamentary Precinct, oversaw construction of the tomb and its placement. He also ran the design competition, which was won by Canadian artist Mary-Ann Liu.

Attention to detail was critical, from ensuring the granite came from the same Quebec quarry as the rest of the monument to finding a suitable gun carriage to transport the remains from Parliament Hill to the final resting place. The RCMP provided a gun carriage and mounted escort for the funeral cortège.

The soldier’s original stone marker was brought from Plot 8, Row E, Grave 7 in Cabaret-Rouge British Cemetery in France to the new Canadian War Museum. It was placed in a special chamber where, at 11 o’clock each Remembrance Day, a beam of sunlight shines through a narrow window and illuminates it.

Today the Tomb of the Unknown Soldier is a focal point for those who attend the annual Remembrance Day ceremony. As the formalities end, a solemn procession of spectators forms up and, one by one, poppies are placed on the tomb, eventually blanketing it in red.