The last soldier killed in WW I 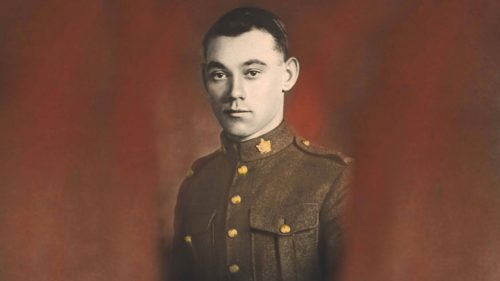 Becoming the last casualty of a war is a distinction no soldier wants, but in the First World War, it fell to a Canadian.

Just minutes before the Armistice went into effect on Nov. 11, 1918, George Lawrence Price was shot, the last soldier of the British Commonwealth killed in the First World War.

Price was born in Nova Scotia in December 1892, and as an adult he moved to Moose Jaw, Sask., where he toiled as a farm labourer.

In September, he spent time in hospital in France recovering from a gas attack during the Hundred Days Offensive. He was back in the line by the end of the month.

On the last day of the First World War, two Canadian battalions headed out at 4 a.m. to secure the bridges on the Canal du Centre in a village that is now a suburb of Mons, Belgium.

At 9 a.m. and under machine-gun fire, the men reached the canal facing Ville-sur-Haine. Privates Price and Art Goodmurphy, worried their position was exposed to German machine guns, set up in houses across the canal. They and three machine gunners went to investigate.

“We could see Germans mounting machine guns,” said Goodmurphy in an interview with the CBC. “And then the machine guns opened up.”

Bullets ricocheted off the bridge as they crossed and pieces of bricks and shingles flew off houses as they took shelter. They searched the houses suspected of harbouring the machine-gun nests, but the Germans had already departed.

“Price said ‘let’s go outside and see what’s going on.’ The two of us went outside and all of a sudden, bang one shot came from way up the end of the street and got him right through the back…. If there had been two there, they’d have got both of us.”

Then a strange silence settled over the village. All firing ceased. The patrol expected to come under machine-gun fire as it returned across the bridge, but none came.

“We never thought of the war being over then, you know,” said Goodmurphy. Price died at 10:58 a.m. “Poor old Price never knew that it was over. He was just doing his job.” 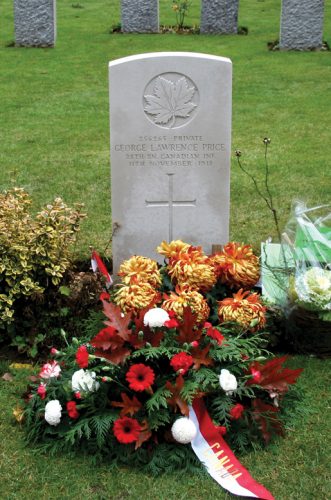 The grave of Private George Lawrence Price.
Sharon Adams
Price is buried in St. Symphorien Military Cemetery near Mons, not far from the graves of the first and last British soldiers to be killed in the war, John Parr and George Edwin Ellison.

On the 50th anniversary of his death, surviving members of his company placed a memorial plaque near the house where Price was killed. The house was demolished and the plaque relocated to a monument where the house stood. In 1991, the village named a new footbridge across the Canal du Centre the George Price Footbridge.