The disappearance of HMCS Shawinigan

HMCS Shawinigan was in service from 1941 to 1944.
Wikimedia
After the ferry SS Caribou was sunk by a U-boat in October 1942 with a loss of 137, including many women and children, the navy provided escorts to ensure the safety of passengers.

Near the end of the war, HMCS Shawinigan was in Cabot Strait off Newfoundland. The corvette was not new to escort duty. Commissioned in late 1941, Shawinigan spent two years escorting convoys back and forth across the Atlantic. In 1944, it began escort duty in home waters, seeing East Coast ferries safely to and from port and patrolling for submarines.

U-boats had been a danger in the Gulf of Saint Lawrence since 1942. “The Royal Canadian Navy established a routine of patrolling the Maritime coasts, but could not prevent the loss of 15 merchant and naval vessels,” wrote Gordon Laco in The Search for the HMCS Shawinigan.

Shawinigan and the U.S. coast guard cutter Sassafras safely escorted a ferry from Sydney, N.S., to Channel-Port aux Basques, N.L., on Nov. 24, 1944. Then the Canadian ship left on an overnight anti-submarine patrol, its commander Lieutenant William J. Jones intending to return to escort the ferry on the return trip the next day.

Instead, in the early hours of Nov. 25, it crossed paths with a U-boat.

The captain of U-1228, Friedrich-Wilhelm Marienfeld, had decided to return to his base in Norway rather than continue his mission in Canadian waters due to a damaged snorkel that could not be repaired. He had already turned for home when Shawinigan was spotted, and he could not resist his first engagement with the enemy.

Marienfeld ordered the firing of a GNAT acoustic torpedo. “These dreaded weapons were specifically designed for killing submarine hunters, which were often difficult to hit due to their smaller size and erratic courses,” wrote Laco.

In the next few minutes, all 91 aboard Shawinigan were lost in the explosion and sinking, the greatest loss of life for the Royal Canadian Navy during the Battle of the St. Lawrence. 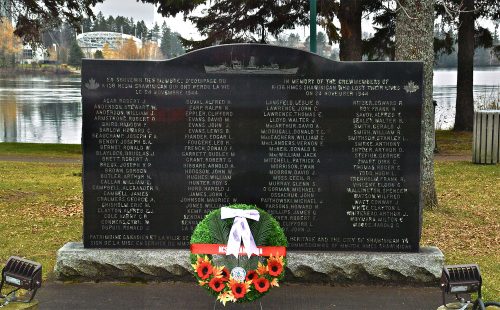 A monument in Shawinigan, Que., in memory of the crew of HMCS Shawinigan.
Wikimedia
U-1228 then returned to Norway. In May 1945, it set out again but engaged in no action prior to the German surrender. It surrendered to the U.S. Navy at Portsmouth, New Hampshire. Its logs revealed it had sunk a ship off the coast of Newfoundland on the date Shawinigan disappeared.

Shawinigan was the last ship lost in that battle, and at first its fate was a mystery, although flotsam and half a dozen bodies were eventually found.

“The GNAT [German Navy Acoustic Torpedo] followed our Shawinigan for several minutes, closed in on her despite her defensive zigzag courses, and struck her,” wrote Laco. “The location could have been in a circle of many square kilometres.”

Despite many attempts to find the corvette using magnetic surveys, sonar and the latest equipment, Shawinigan’s resting place has not been found.