Sixth statue to be added to the Trail of the Caribou 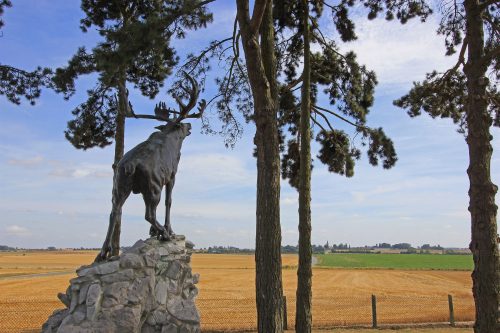 The government of Newfoundland and Labrador has awarded a contract to a local firm to build a sixth caribou statue to be placed in Gallipoli, Turkey, in order to complete the Trail of the Caribou.

Innovation NL, an engineering and project-management company in St. John’s, will undertake the project, the government announced in partnership with the Royal Newfoundland Regiment Advisory Council and the College of the North Atlantic on July 29. The estimated value of the contract is $194,000.

The new statue is to be placed 25 metres northwest of the Hill 10 Cemetery at Gallipoli, a Commonwealth War Graves Commission cemetery where 12 members of the Newfoundland Regiment are buried. Among them is Private Hugh McWhirter, the first Newfoundlander killed in the First World War. By the time the regiment left Gallipoli, 49 members had been killed and 93 wounded.

The regiment was there from September 1915 until January 1916, joining British, Australian and New Zealand forces who had been there since April fighting against the Ottoman Empire and Germany.

Padre Thomas Nangle…had always hoped a sixth statue could be built at Gallipoli.

The statue is expected to weigh 680 kilograms and be approximately three metres from nose to tail and two-and-a-half metres high. The measurements were precisely determined by students in the College of the North Atlantic’s Geomatics/Surveying Engineering Technology program who studied the caribou statue that sits in Bowring Park in St. John’s.

The Trail of the Caribou is a series of five battlefield memorials in France and Belgium, built to commemorate Newfoundland’s contributions and sacrifices during the First World War. Each features a bronze statue of a caribou, the emblem of the Newfoundland Regiment (and, later, Royal Newfoundland Regiment). The most famous is the caribou statue at the Beaumont-Hamel Newfoundland Memorial in France, which commemorates the battle in which the regiment was almost wiped out during the first day of the Battle of the Somme in 1916. The battlefield has been preserved and is now designated a world heritage site.

The other statues are at Gueudecourt, Masnières and Monchy-le-Preux in France and Courtrai in Belgium. The one in Bowring Park was erected much later.

The original planner of the trail, Padre Thomas Nangle (he was padre to the regiment during much of the First World War) had always hoped a sixth statue could be built at Gallipoli. But that was prevented by the collapse of the Ottoman Empire and a long civil war that led to the establishment of the Republic of Turkey in 1923.

The advisory council made creating the sixth statue a priority to mark the 100th anniversary of the end of the First World War. The Newfoundland government worked with the federal government and the Republic of Turkey to establish a memorial in Gallipoli Peninsula Historical National Park.

The Turks have always shared respect for the war dead of other countries who are buried there.

“Those heroes who shed their blood in the territory of this country, you are in the soil of a friendly country,” said the Turkish hero Mustafa Kemal Atatürk. “Here, therefore, rest in peace. You are lying with the Mehmetçik [Turkish soldiers] side by side, in each other’s arms.”