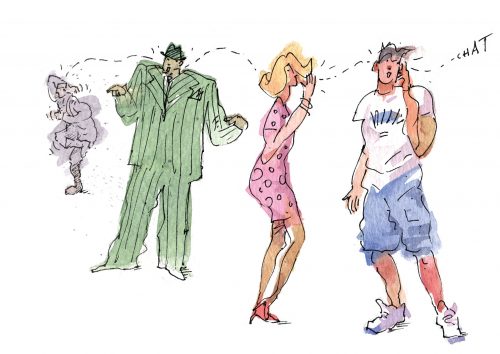 The First World War has been over for more than a century, but it still echoes today, even in the language.

The thousands of Canadian soldiers who went overseas in 1914-18 brought home words and phrases we still use.

Soldiers in the trenches were plagued by lice, which were known as “chats.” The men would gather in quiet times to pick the lice out of their garments and pass the time of day with their buddies. They called it “chatting” and we still chat today, although without the pesky insects.

The concept of three on a match being bad luck also came from the trenches. Soldiers believed that the lit match applied to one cigarette might draw the eye of a sniper. The second light would give him a chance to zero in and the third light, Bang! Very bad luck.

The word strafe—to machine-gun a target from the air—originated in 1914-18. It was taken from the German word strafe, to punish.

The sniper also got his name in the First World War. British officers who had served in India remembered shooting parties there, where the hardest bird to hit was the small and elusive snipe. The marksmen who could hit such a tricky target were dubbed snipers. The name passed to the sharpshooters who picked off enemy soldiers in the opposing trenches.

As a matter of security, when the first armoured fighting vehicles were designed and built in Britain they were said to be mobile tanks for hauling water. Their descendants are still called tanks.

Have you ever ordered a glass of plonk? That’s a mispronunciation of the French blanc, as in vin blanc, a favourite tipple for soldiers resting up after a stint in the trenches.

Some French mispronunciations were widespread during the war, even if they haven’t survived into today’s lexicon. For example, the Belgian town of Ypres was “Wipers” to British and Canadian soldiers.

Dress infractions—unbuttoned pockets and the like—can be a trial, especially around keen NCOs eager to dress people down, but an old soldier I knew told me his solution for this sort of harassment. It only worked when he was away from his own regiment, but in those circumstances, he claimed it worked 90 per cent of the time. The secret, he said, was to blame the alleged infraction on some unusual regimental tradition, that, for instance, a pocket was left unbuttoned in memory of some regimental hero in the distant past. Given that regiments can have highly obscure traditions, many NCOs preferred to back away rather than run afoul of a regimental eccentricity.

The RCAF, like the RAF and the United States Air Force, wears a light-blue uniform very different from army green or navy blue. But why? Some suggest it was a sort of sky blue, but I have come across a
different explanation. Since it is based on  government stinginess, I suspect it’s probably true.

In April 1918, the RAF became the world’s first independent air force, one not subordinate to the army or navy.

We still chat today, although without the pesky insects.

As such, it needed a distinctive uniform. As it happened, Britain had stocks of light blue woollen cloth in its warehouses. The material had been ordered to make cavalry uniforms for Czarist Russia, but the Russian Revolution had killed that idea. So there was all this cloth and the air force needed a distinctive uniform. So the new service ended up with the Czarist blue. Other air forces followed suit in subsequent years.

The RAF’s unique rank names, pilot officer, squadron leader and the like—most of which were also used in the RCAF until 1968—were a compromise after the British Army and Royal Navy objected to their ranks being used.

The late George Blackburn, who wrote three well-received books about his Second World War service in the artillery, had a droll sense of humour which came out in his writing and the stories he would tell about his war.

For example, he recalled that the prickly personality of the commandant of his officer training centre in Brockville, Ont., promoted the kind of tension that probably pervaded the quarterdeck of HMS Bounty.

Blackburn said the commandant wanted to turn his trainees into full-fledged officers and gentlemen. The colonel demanded perfect British table manners—none of this New World nonsense of moving the fork from left hand to right. He also had his students gaining proficiency at hitting clay pigeons with shotguns so they wouldn’t disgrace themselves if they happened to be invited to shoot grouse with British gentry.

Blackburn, who was also a journalist, a senior public servant and an award-winning playwright and documentary producer, was awarded the Military Cross for his wartime exploits.