Rescue tugs to the rescue 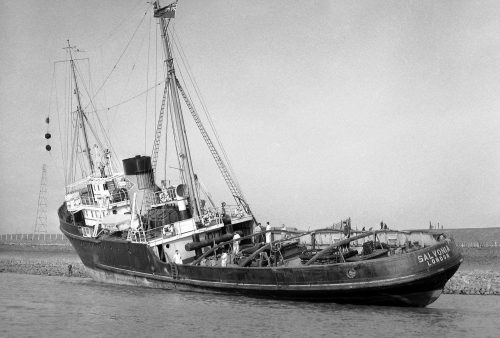 HMS Salvonia was one of the rescue tugs that collected survivors of the U-boat attack on Convoy HX-77.

German submariners referred to the period from July to October 1940 as Die Glückliche Zeit, or the Happy Time, when their wolf packs sank more than 280 Allied ships.

It was not too happy for Convoy HX-77. Between Oct. 11 and 13, a wolf pack targeted its 42 cargo ships, picking off six vessels carrying 35,000 tonnes of supplies and war materiel to the United Kingdom.

At just after 10 p.m. in a gale on Oct. 11, the cargo ship Port Gisborne was hit by a torpedo from U-48 in the North Atlantic, about 180 kilometres off Ireland.

The crew abandoned ship in three lifeboats, but survivors in one boat drowned after it capsized in the storm, bringing the total of dead to 26. The other two lifeboats, carrying 36 crew and one gunner, drifted apart in the storm.

On Oct. 14, survivors in one of Port Gisborne’s lifeboats spotted another containing 16 survivors from the same convoy—13 Canadian and three Free French merchant mariners of the steamship Saint-Malô.

The Port Gisborne lifeboat took the other in tow and on Oct. 21 Saint-Malô survivors transferred to the other lifeboat.

The next day, the rescue tug HMS Salvonia collected the combined survivors, and two days later, the second lifeboat from Port Gisborne was picked up by the steam merchant Alpera.

“On the rescue tugs, [it was] like convoy duty and they usually brought up the rear behind the convoy,” recalled Albert McGrath of St. John’s. “If a ship got slowed down or anything was wrong with it…you could go on up and latch onto it as quickly as possible. The less delay, of course, the better. We’d just heave the tow line if there was anyone onboard, and they’d take the heaving line, and put on our tow line, and they’d hitch on that way.”

By war’s end, there were 85 rescue tugs in service, with a combined total of about 2,000 crew, who had saved 254 Allied warships, nearly three million tonnes of shipping, and an untold number of survivors of wrecks and U-boat attacks.

“We went our own way, quietly proud of the job we did,” said tug officer Jack Close, “which by its very nature was often carried out in the worst of conditions and in the knowledge that we were frequently somebody’s last hope.”

After a week and a half drifting at sea in a lifeboat, it must have seemed that way to the survivors of Port Gisborne and Saint-Malô.