Face to Face | Was All Quiet on the Western Front (1930) the most important war film ever made? 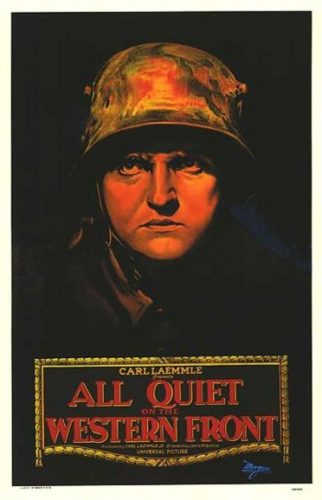 All Quiet on the Western Front is an Academy Award-winning 1930 film based on the classic anti-war novel by a German veteran of the First World War, Erich Maria Remarque.

Coming 12 years after the First World War ended and with Nazism on the rise in Germany, the film may have had a more profound impact than any war movie ever. Ignoring the evolution of technology and the old-style theatrics, by that measure alone—its impact—it can be viably argued that All Quiet is the greatest war film ever made.

Directed by Lewis Milestone and starring Lew Ayres and Louis Wolheim, it follows a class of German students inspired by their teacher to sign up and go off to war.

It is a relentless, unforgiving chronicle of misery and death—for its time a detailed and groundbreaking slice of life at the front, an early “talkie” that employed powerful writing and novel filmmaking techniques (such as elevated camera tracking). And it not only dispensed with traditional ideals of glory, it mocked them.

Made decades before Apocalypse Now, Schindler’s List and Saving Private Ryan, All Quiet on the Western Front has war-weary troops wondering what they’re fighting for; a guilt-ridden German trying to save the life of his French enemy; and, finally, the hero imploring youth not to waste their lives by donning uniforms.

“When it comes to dying for your country, it’s better not to die at all,” Ayres’ character Paul Bäumer tells the nonplussed schoolboys.

Such perspectives just didn’t exist in the films of the era and, given the imminent onset of the Second World War with its spate of propagandist films, it would be decades before the industry wholeheartedly embraced the All Quiet point of view.

That it was told by Hollywood from the German standpoint was unusual, but it gave its American filmmakers licence to be true to the book and make their film as raw as they wanted without reflecting on the Tommies and the Doughboys, who remain unstained by its graphic and not altogether complimentary depictions.

The movie was released to rave reviews in the United States on April 21, 1930—“a harrowing, gruesome, morbid tale of war, so compelling in its realism, bigness and repulsiveness that [it] becomes at once a money picture,” declared Variety.

It premiered in Germany the following December, three months after six million voters elevated the Nazis to second-party status in the Reichstag. With moviegoers packing Berlin’s Mozart Hall to see it, a cadre of 150 young Nazi Brownshirts were led into the theatre by Hitler’s propaganda chief, Josef Goebbels.

They spewed anti-Semitic invective, shouting “Judenfilm!” as they tossed stink bombs from the balcony, spread sneezing powder in the air, and released white mice into the aisles.

The 1929 book—a bestseller—was banned and burned by the Nazis. Hitler was a diehard film buff who watched Hollywood movies nightly. Germany banned All Quiet in 1931 before a sanitized version was returned to theatres. The Nazis banned it altogether when they came to power in 1933.

A host of other countries did similar, including Italy and Austria, where the 1931 prohibition wasn’t lifted until the 1980s.

The first film honoured by the Oscars as both best produced and directed, All Quiet appears on numerous “best-ever” lists, including the American Film Institute’s best American epics, where it came in at No. 7.

There are hundreds of war films made in many nations, and it is completely impossible to judge one as the most important. All we can do is say we think this one is more important than another, knowing full well that other opinions are as valid.

But there is no doubt that All Quiet on the Western Front is a fine film, one that brought the horror of war to audiences around the globe. It is sharply anti-war, a very politically correct view in 1930, and especially so in the United States where this film, made early in the era of sound, was produced.

All Quiet is about German youth sent to fight and die for Kaiser and Kultur. To me, as a military historian, that theme—even 90 years later—remains a very hard sell. The Germans had started the war and fought it viciously, ravaging eastern Europe, Belgium and France, brutalizing women and men, and destroying factories, mines and railways when they retreated. I can sympathize with German boys caught up in their nation’s vainglorious attempts to rule Europe, but I cannot in good conscience judge this pro-German film the most important.

Moreover, the movie is a bit mawkish, the acting less than stellar, and only the use of sound so early in the “talkies” made it stand out. And, of course, the film is in black and white, so it simply cannot compare visually with other important war films.

Is that too harsh a judgment? I think not. Consider Lawrence of Arabia (1962), a wondrous film in Technicolor with a great musical score and a memorable performance by Peter O’Toole. The desert battle scenes are superb. Or think of Zulu (1964), Michael Caine’s first big starring role. Who can forget the Welsh soldiers who fend off the Zulu warriors singing “Men of Harlech” and the Zulus acknowledging British bravery with their own chant? Zulu isn’t entirely accurate historically, but it is splendid filmmaking.

And what of Alec Guinness in 1957’s The Bridge on the River Kwai? This Anglo-American production shows the harrowing treatment of British prisoners of war by the Japanese. The plot has Guinness’s Colonel Nicholson taking over the construction of a bridge from the incompetent Japanese Colonel Saito and restoring the morale of his soldiers in the process. Only when Allied saboteurs blow up his work does Nicholson realize what he has done to help the enemy cause.

Then there is Saving Private Ryan (1998). To me, the scenes of the American D-Day landing on Omaha Beach are simply shattering to see. Could there ever be a stronger anti-war statement? Could heroism be portrayed more realistically? Canadians enjoy sneering at American-made war films as boastful (and there is a cheap shot at General Bernard Montgomery in Saving Private Ryan), but this film, especially in its opening sequences, is simply superb.

There are many other great films, such as Stalag 17 and Paths of Glory. All Quiet on the Western Front is good, to be sure, but it pales beside a host of other important, moving films.

PrevPrevious ArticleShould the James Cross kidnappers have been granted safe passage to Cuba?
Next ArticleAre there 98 Canadian VCs?Next