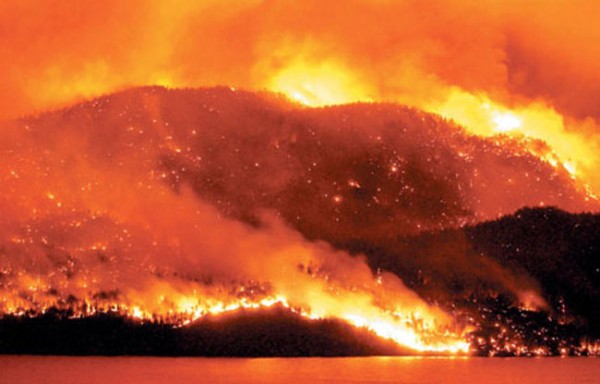 Wildfire surges through Okanagan Mountain Provincial Park in 2003.
castanet
In the summer of 2003, British Columbia was ablaze.

Some 2,500 separate forest fires burned through more than 250,000 hectares of trees, fields, vineyards and crops—an area about half the size of Prince Edward Island.

Hundreds of homes and dozens of businesses burned. More than 30,000 people were evacuated in the path of a destructive fire so hot that whole trees burst instantaneously into flame.

A cigarette carelessly discarded on July 30 ignited the wildfire near McLure, B.C., on the North Thompson River, 45 kilometres north of Kamloops. It grew to more than 10 hectares within two hours. On Aug. 1, it jumped the river and became a firestorm that burned for 75 days, consuming more than 26,000 hectares of forest, 72 homes and nine businesses.

And that was just one fire. On one day alone, 218 new fires started in the tinder-dry conditions.

The province’s firefighting force of about 10,000 was overwhelmed, and in early August an appeal for help was made to the federal government. It sent in 2,600 members of the Canadian Armed Forces, including regular force and infantry troops, engineers, search-and-rescue specialists, a helicopter squadron and medical professionals.

The soldiers were given quick lessons in hose handling, safety procedures and fire behaviour, and then joined the fire lines.

The province’s firefighting force of
about 10,000 was overwhelmed.

“The first couple of days fighting the fire in Kamloops was pretty intense,” said retired major Richard Erland in an interview with Kelowna media. Erland, a captain at the time of the fire, had to ensure military firefighters were stationed exactly where they were needed most.

From headquarters in Vernon, he oversaw operations in five different areas, including Barriere, Kelowna, Nakusp, Okanagan and Chase.

Nearly 1,400 CAF members helped 1,000 forestry firefighters battle a blaze caused by a lightning strike in Okanagan Mountain Provincial Park in mid-August. It turned out to be the most damaging wildfire in B.C.’s history. Some residents in Kelowna were evacuated twice.

On Aug. 21, it swept into Kelowna. “The battle we’re fighting here…is not just a battle against the fire, it’s a battle against fatigue,” said Lieutenant-Commander Paul Seguna in an interview with The Globe and Mail.

In early September, air and navy reinforcements arrived and took up their places in the fire lines. In a couple of weeks, the threat to lives had ended, and the military handed off to provincial firefighters. Operation Peregrine came to an end Sept. 16.