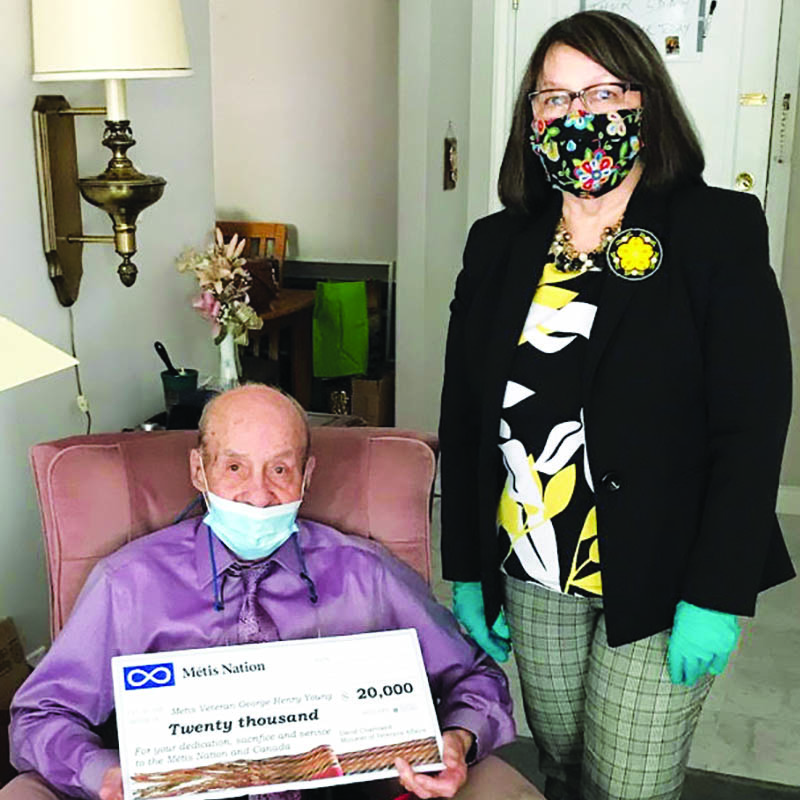 The program is part of the $30-million agreement signed by Canada and the Métis Nation on June 13, 2019, to honour Métis veterans of the Second World War and provide compensation payments. The agreement came with a formal apology from Prime Minister Justin Trudeau for the wrongs experienced by Métis veterans when they returned from the war.

“Our nation has waited 75 years for this. Canada’s apology to our veterans has resonated throughout the Métis homeland with reverence,” said MNC Veterans Minister David Chartrand. “Those we have lost during our struggle for recognition can finally rest in peace, knowing they have been recognized and honoured for their contributions and sacrifice. Our nation rejoices as we celebrate the surviving World War II veterans and honour them as they receive their recognition payment.”

The settlement was reached to recognize that, after the Second World War, many Métis veterans were left unaware of veterans’ programs for disability pensions, education, employment, loans and other benefits that were available to them.

“Canada’s apology to our veterans has resonated throughout the MÉtis homeland with reverence.”

• To recognize, through individual recognition payments, the experiences of Second World War Métis veterans both before and after the war that may have negatively impacted their demobilization success.

• To support a commemorative program to promote awareness and appreciation of Métis veterans’ sacrifices and contributions.

Originally, Phase II of the program was initiated to recognize those veterans who passed away during the negotiation period. It was to provide a recognition payment to spouses and common-law partners of those veterans who died after January 2016. Should the spouse or common-law partner have died as well, the payment will be split equally between the surviving children.

Chartrand announced that, after careful consultation, the compensation will also be presented to all the surviving spouses and common-law partners regardless of when they died. The policy remains the same for the children of veterans who died after January 2016.

“Our WW II veterans who have passed would want to take care of their families and ensure their future and prosperity,” said Chartrand. “Phase II of the MVLP will accomplish this and help the families of the veterans heal, and take comfort their loved one is being honoured as a hero of this country.”

Phase III of the program, which is expected to be launched this fall, is the commemorative portion intent on keeping alive the Métis veterans’ legacy by promoting awareness and appreciation among Métis and the Canadian public. It will support ceremonies and the erection of monuments as well as undertaking new initiatives. Grassroots consultation will determine the scope and eligibility of these programs.

The Métis traditional homelands include the three Prairie provinces and contiguous parts of British Columbia, Northwest Territories, Ontario and the United States. There are approximately 400,000 Métis citizens in Canada.

In April, the MNC launched a new website to promote the program at www.metisveterans.ca.