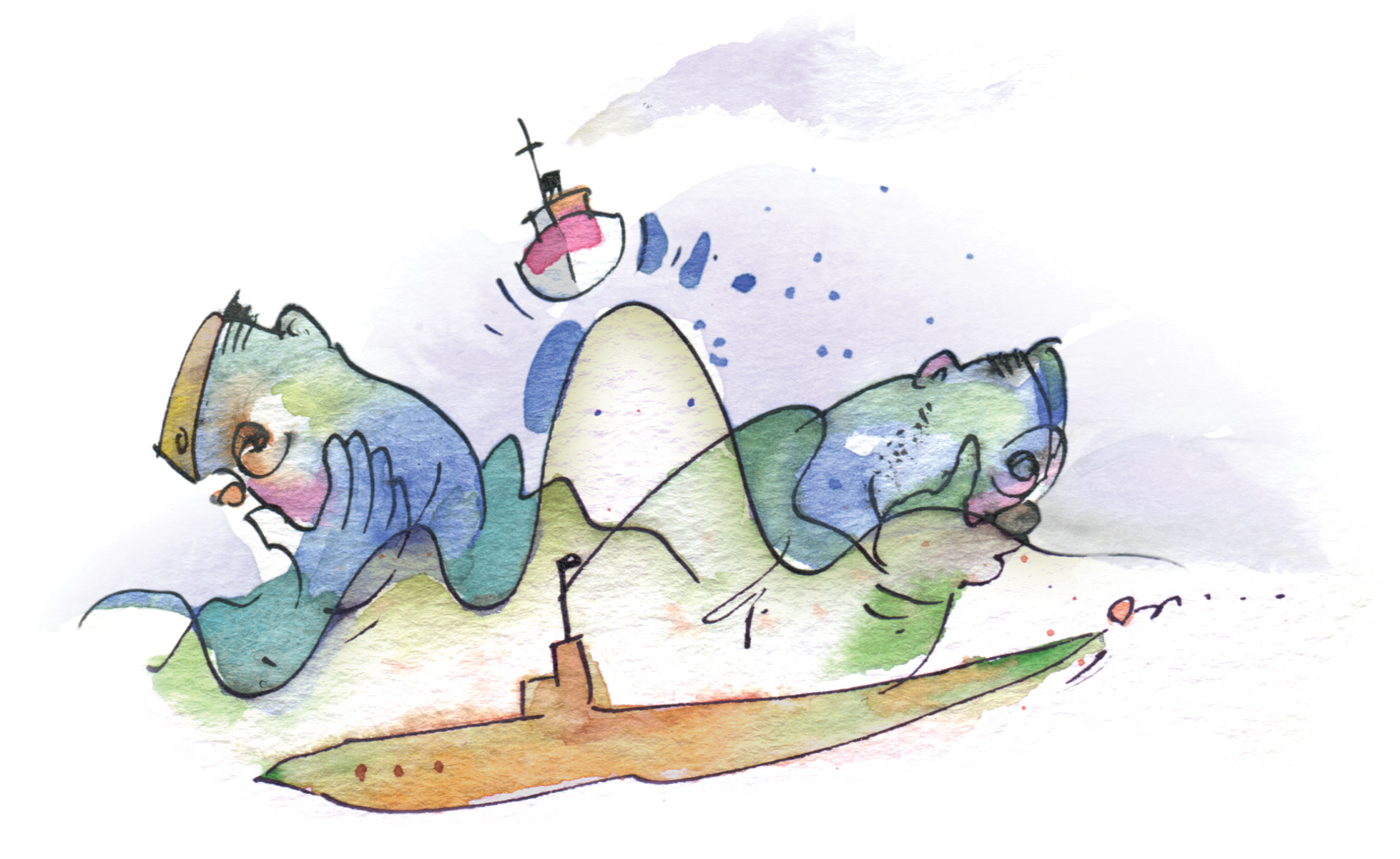 Corvettes, the tough little warships that made up much of the Royal Canadian Navy’s Second World War fleet, were notorious as lively sea boats. Although they could take the worst the North Atlantic could dish out, they were said to roll on wet grass. It took a strong stomach to handle the dizzying movements their little round hulls could develop.

In May 1945, as the war came to an end, Germany’s surviving U-boats were ordered to surface, hoist black flags and signal their positions so they could be located by Allied warships. Some of them ended up surrendering to Canadian vessels.

The corvette HMCS Thorlock and the frigate HMCS Victoriaville were detached from a convoy in mid-May to rendezvous with one of these surrendering subs, U-190.

A boarding party from the corvette took charge of the U-boat. A German operating crew was left aboard under guard, while their shipmates were transferred to Thorlock.

This was the first time the Canadians actually saw the dreaded submariners they had watched in fear for all the years of the war. To their amusement, most of the prisoners got seasick aboard the pitching corvette, proving that submariners have no sea legs.

“He sets low personal standards and consistently fails to achieve them.”

Quotes underlining the fact that military forecasting is never easy:

“Airplanes are interesting toys but of no military value.”

—Marshal Ferdinand Foch, when he was a professor of strategy at France’s Ecole Supérieure de Guerre before the First World War. Foch became overall commander of Allied forces in 1918.

“Even if a submarine should work by a miracle, it will never be used. No country in this world would ever use such a vicious and petty form of warfare!”

—Admiral William Henderson, 1914. Henderson was one of the founders of the Royal Navy’s Naval Review.

If enough data is collected, a board of inquiry can prove anything.

If at first you don’t succeed, call in an air strike.

The more a weapon costs, the farther away you will have to send it to be repaired.

Never trust a private with a loaded weapon, or an officer with a map.

The fastest way to find your sergeant
is to go to sleep.

John Emmans of Geraldton, Ont., tells us his father served as a Royal Air Force mechanic at a training unit that saw its share of mishaps. One morning, his father walked out of the mess hall and found that the hangar had a freshly painted sign: “U bend ’em, we mend ’em.”

“Even if a submarine should work by a miracle, it will never be used.”

Retired master warrant officer Garnet Shearer of Quebec City recalls a tale from his time as an instructor at the Royal 22nd Regiment’s combat arms school in 1971.

At the time, the school had a warrant officer who ended nearly every order with the English phrase: “One, one, two.”

This NCO dispatched a recruit to the headquarters building one day. When the youngster arrived, he encountered the imposing J.P. Côté, RSM of the school. Côté asked the recruit what he wanted and who had sent him.

The young fellow froze and finally blurted out: “WO one, one, two, sir.”

Among the most dangerous things one can hear in the military:

A private saying, “I learned about this in basic.”

A lieutenant saying, “Based on my experience.”

A captain saying, “I was just thinking.”

I have been told that sometime after the Second World War, a well-dressed fellow appeared at the RCAF officers mess in Winnipeg. He said he wasn’t a member, but was in town on business and hoped he might have a drink.

The steward looked him over and asked his name.

“I’m Douglas Bader,” the visitor replied. The legless legend of the RAF was, of course, welcomed with open arms.

(Formally speaking, he was Group Captain Douglas Robert Bader, CBE, DSO and Bar, DFC and Bar. He had lost his legs in a crash while attempting aerobatics in December 1931.)

When Bader was shot down over France on Aug. 9, 1941, he was greeted warmly by German ace Adolf Galland at the Luftwaffe airbase at Saint-Omer. Galland asked him how he had managed to bail out of his crippled Spitfire with no legs. Bader said he didn’t remember. “One never does,” Galland replied.

As a prisoner, Bader made a number of escape attempts, to the point where his captors threatened to confiscate his artificial legs.

Bader maintained until his death in 1982 that he was shot down by a German pilot, but research in this century suggests he may have been a victim of friendly fire from another Spitfire.

> Do you have a funny and true tale from Canada’s military culture? Send your story to [email protected]