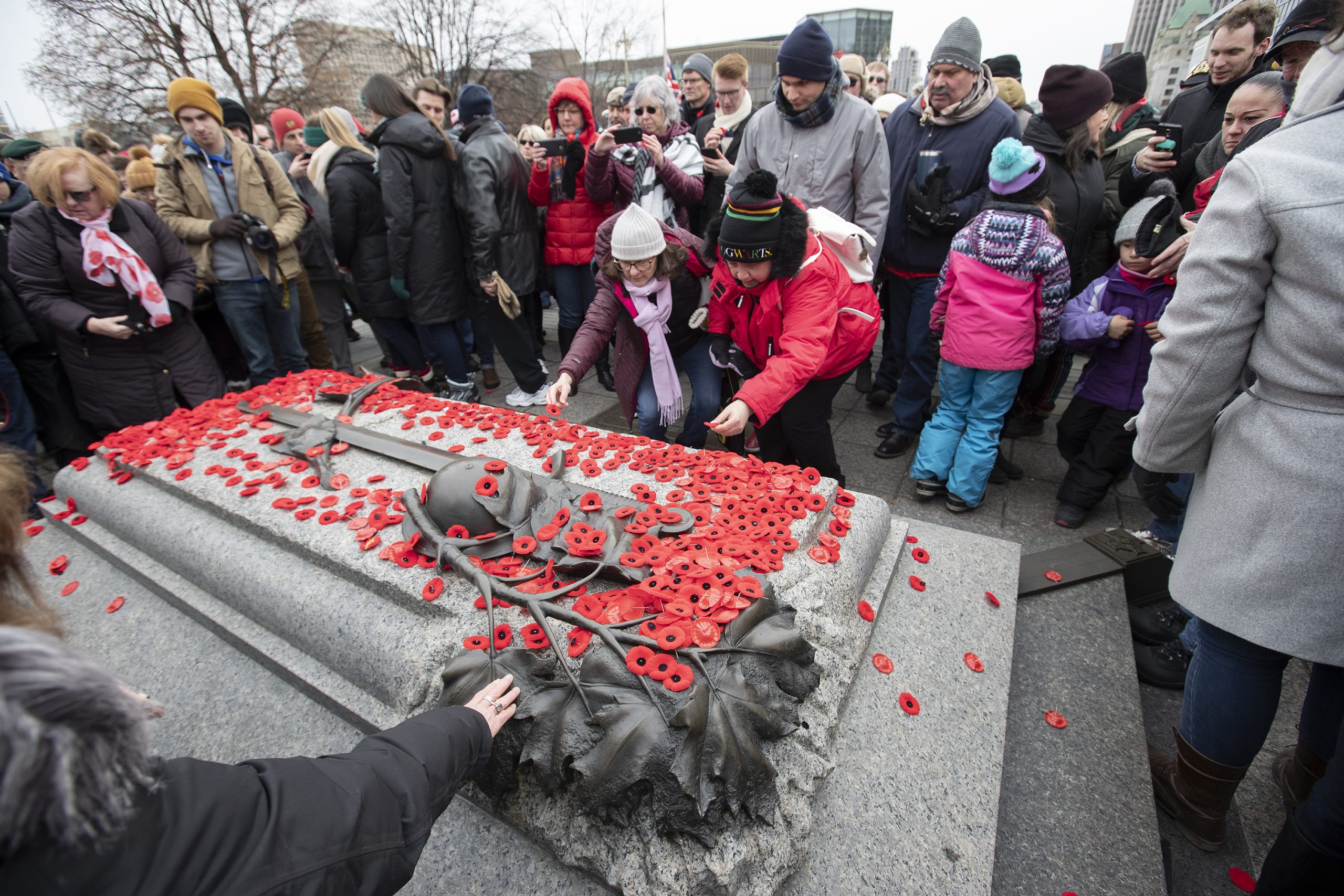 Canadians place their poppies on the Tomb of the Unknown Soldier following the Remembrance Day ceremony in Ottawa, November 2019.
Stephen J. Thorne

It has been 20 years since an unknown soldier who died in the fighting at Vimy Ridge in France during the First World War was reinterred in the Tomb of the Unknown Soldier in Ottawa.

There are previous examples of other countries paying such tribute: Great Britain has the Tomb of the Unknown Soldier in Westminster Abbey in London; France has one beneath the Arc de Triomphe in Paris; the United States has theirs in Arlington National Cemetery in Virginia.

Canada’s began as a millennium project proposed by The Royal Canadian Legion. Once the federal government agreed to the plan first suggested in 1996, a massive effort got underway that included the departments of Veterans Affairs, Public Works and Government Services, Canadian Heritage, National Defence, the RCMP, the Canadian War Museum, the Commonwealth War Graves Commission and the Office of the Governor General.

The body was exhumed from a grave marked “Known unto God” at the Cabaret-Rouge British Cemetery near Vimy. Organizers took a pledge that they would not use DNA and other tools of modern science to try to identify the soldier in the future. Identification work continues, however, on the unidentified remains of others. 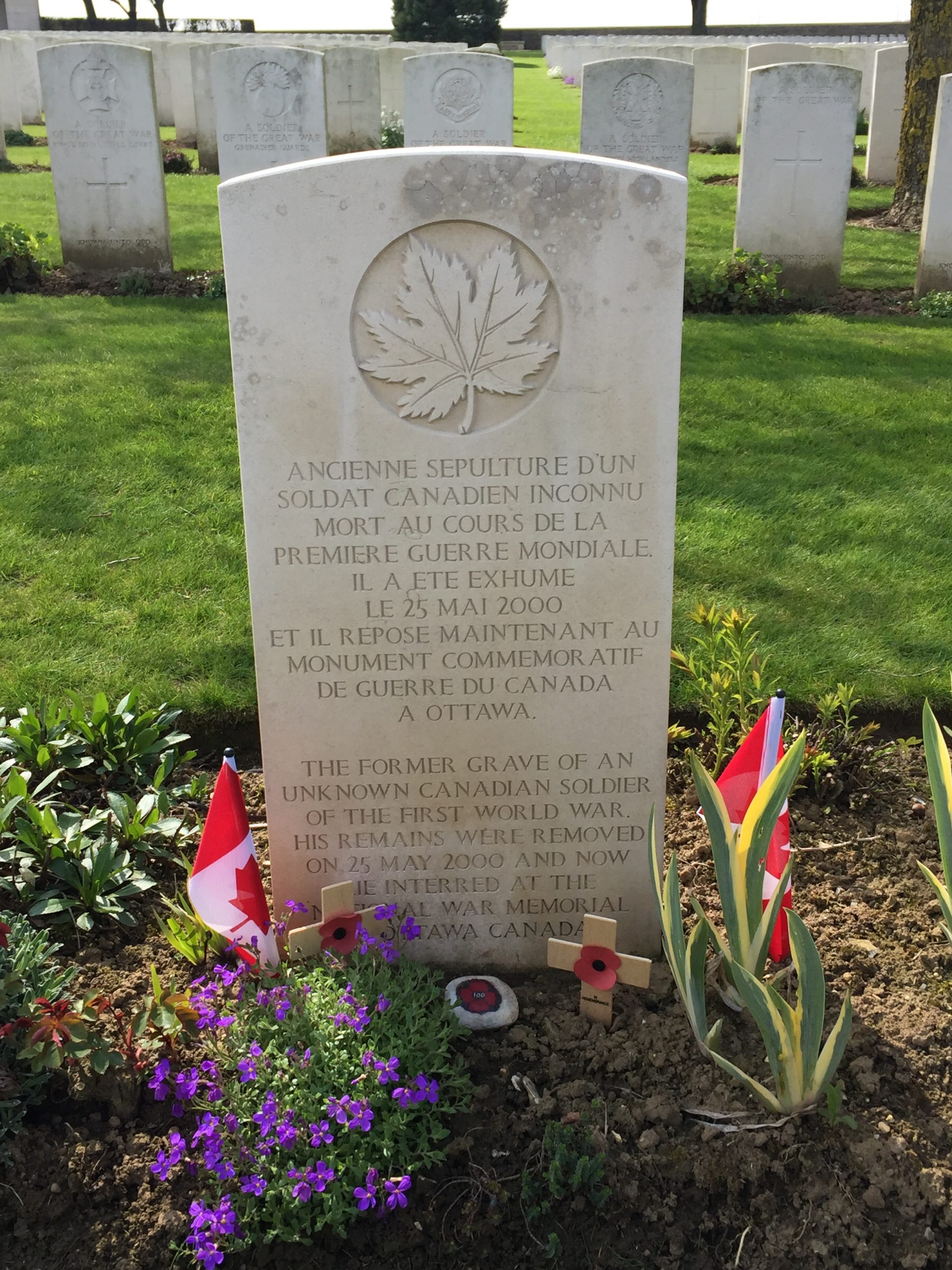 On May 25, 2000, the Commonwealth War Graves Commission exhumed the remains of a soldier during a ceremony that took place at the Canadian National Vimy Memorial in France.
Adam Tindal

The body was placed in a casket and flown to Ottawa, where it lay in state at the Parliament Buildings for three days. On May 28, an elaborate ceremony took place with governor general Adrienne Clarkson and prime minister Jean Chrétien leading a procession from Parliament Hill through the streets of Ottawa to the National War Memorial.

There the body was solemnly lowered into the prepared grave. The provincial presidents of The Royal Canadian Legion poured soil from their native provinces and territories into the grave. Prayers and eulogies were given and then the tomb was covered. The soldier now rests there in perpetuity.

Prayers and eulogies were given and then the tomb was covered. The soldier now rests there in perpetuity.

The following November, attendees at the National Remembrance Day Ceremony at the National War Memorial respectfully left their poppies on top of the tomb following the formalities. This became an annual tradition. Similarly, the tomb is covered with thousands of small Canadian flags on Canada Day.

The Remembrance Day ceremonies themselves began attracting larger and larger crowds as Canada joined the war in Afghanistan, fighting in its first full-combat deployment since the Korean War.

Successful lobbying by the Legion and other veteran groups led the Department of National Defence to post a ceremonial guard at the tomb during daytime hours from April to November to ensure that visitors pay their respects in a dignified manner. It has come to be considered an honour for the Canadian Armed Forces members of all branches who serve as guards.

In 2014, Corporal Nathan Cirillo of the Argyll and Sutherland Highlanders of Canada paid the ultimate price for that service when he was killed by a disturbed gunman who then turned his attack on Parliament Hill.

Under pandemic restrictions, the ceremony marking the 20th anniversary on May 28 was modest but poignant: a representative of the Commonwealth War Graves Commission placed a wreath of flowers taken from the cemetery where the unnamed soldier was originally buried.

The Tomb of the Unknown Soldier is one of our country’s most poignant symbols—a sacred place—and one that every Canadian, at least once in a lifetime, should have the honour of visiting in person.