Home » Health » COVID-19 » Face to Face: Should Canada’s military be restructured to increase its response to health crises and natural disasters?

Face to Face: Should Canada’s military be restructured to increase its response to health crises and natural disasters?

ERNIE REGEHR is senior fellow with The Simons Foundation of Vancouver and co-founder of Project Ploughshares.

Early in the COVID-19 pandemic, the Canadian Armed Forces declared it was ready to mobilize up to 24,000 troops to “assist with humanitarian support, wellness checks, natural disaster responses and other tasks as required.” 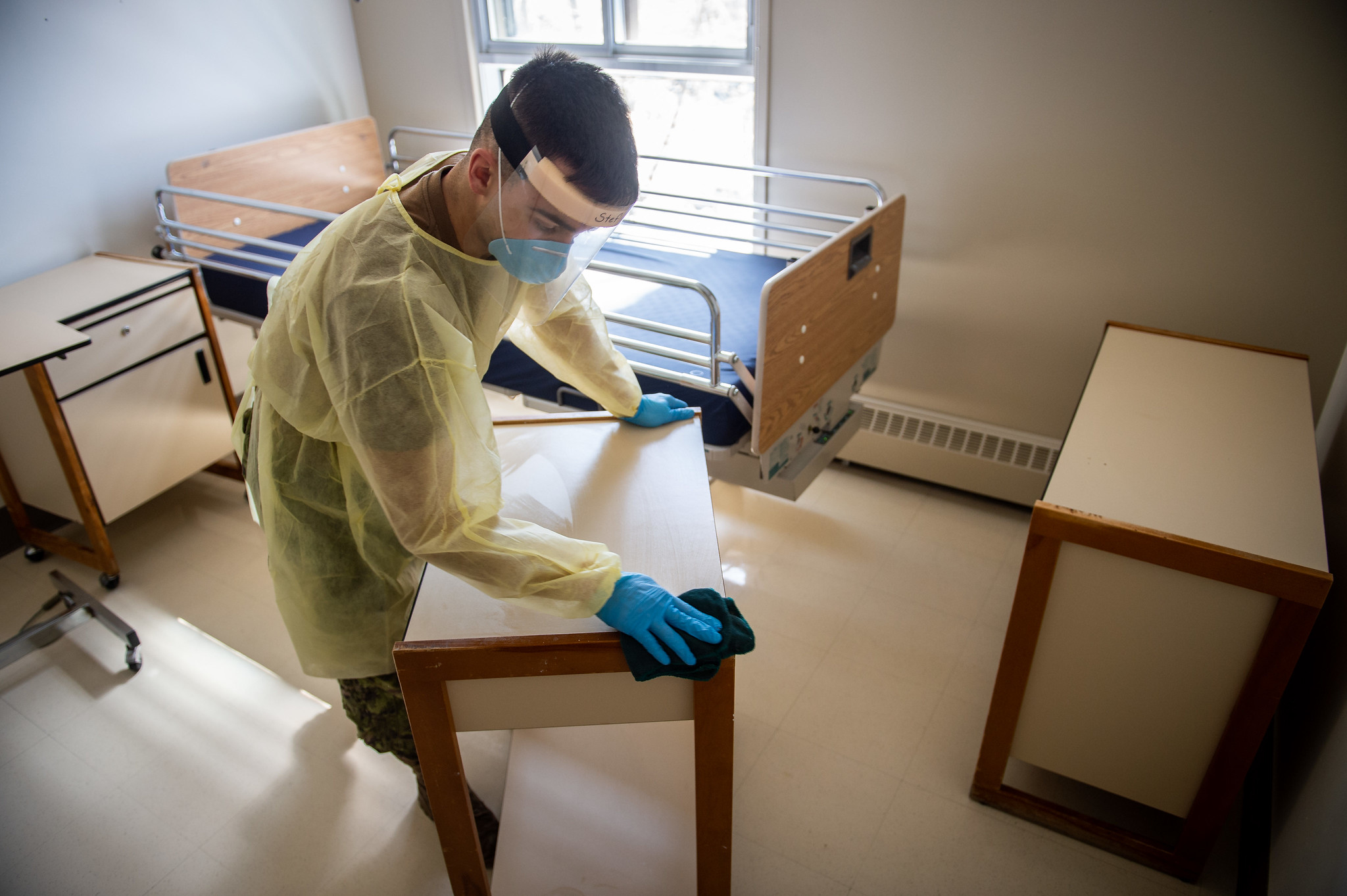 Members of 4th Battalion, Royal 22e Régiment carry out a number of tasks at the Yvon Brunet long-term care facility as part of Operation LASER in Verdun, Quebec, in May.
Cpl Genevieve Beaulieu/Combat Camera

Canada’s military also has a history of engagement in crisis and disaster mitigation internationally, through UN operations to support humanitarian relief and restore order and civil governance. The CAF maintains its Disaster Assistance Response Team to deliver medical and engineering assistance on very short notice, such as the recovery effort after the 2010 earthquake in Haiti.

Law enforcement, responding to disasters, search and rescue—these are three of eight core missions listed in Canada’s Defence Plan 2018-2023. In other words, the CAF is already directly tasked to respond to crises, including health emergencies and natural disasters, when called on by civilian authorities.

Demand for those services will only increase. COVID-19 will not be the last large-scale health emergency we’ll have to face. The future promises more frequent and destructive weather events. The threat of cyberattacks on public infrastructure is growing.

Canada has a pressing security agenda for which civilian departments and agencies have primary responsibility, but for which they will sometimes need support from the co-ordination professionals, technical experts and logistic services that the CAF is mandated to keep at the ready. As the 1994 Defence White Paper stated, the CAF has “readiness and reach” not usually available to civilian agencies.

The point is not that military forces should be taking over functions that are properly and constitutionally civilian responsibilities. Military assistance to civilian authorities must always be short-term and designed to get through the worst of an emergency—in COVID-19 parlance, to flatten the curve.

(The exception is military assistance to domestic civilian air and maritime surveillance and control, which is a routine, rather than emergency, operation of the CAF.)

It is critically important that military assistance to civil authorities adheres to key principles. The civilian authorities being assisted must remain the authorities. Troops follow their commanders’ orders, but the commanders take their orders from the civilians in charge.

It is also fundamental that military forces be integrated into civilian operational processes, rather than civilian processes being made to conform to military models.

The CAF is already mandated to help when called on, an agency of last resort—“last in, first out.”

The nature and extent of any proposed restructuring to increase its response to civil emergencies must be determined by crisis-response professionals. The political responsibility is to recognize this urgency and ensure that a process is put in place to further improve the CAF’s preparedness and effectiveness.

DAVID J. BERCUSON, author of the “Eye on Defence” column in Legion Magazine, is director of the Centre for Military and Strategic Studies at the University of Calgary.

Militaries have one central purpose: to fight wars, kill combatants and break things at the behest of the state. In democracies, it is on behalf of the citizens of the state as directed by the government.

To that end, militaries—and the Canadian Armed Forces in particular—recruit, train and are financed by the taxpayer, to ensure that if the state decides that its political or diplomatic aims in certain international circumstances warrant violence, the CAF will deliver.

From 2001 to 2014, Canada sent more than 40,000 men and women to Afghanistan to aid international efforts to battle terrorism and help bring democracy to the country. For a decade, the war in Afghanistan was the central organizing principle of the Canadian military because Ottawa decided Canada had an obligation to aid the United States, NATO and the United Nations.

During that time, the Canadian military was fighting a war with the Taliban, and that was the army’s central mission. The air force soon joined in (with helicopter and transport support) and even the navy contributed by sending personnel to supplement both services.

The strain on the CAF was considerable, and high command was well aware of it. At one point, General Andrew Leslie told a gathering of soldiers that if they hadn’t been deployed to Afghanistan yet, they would surely go soon. That was the CAF carrying out its prime military mission—war fighting. 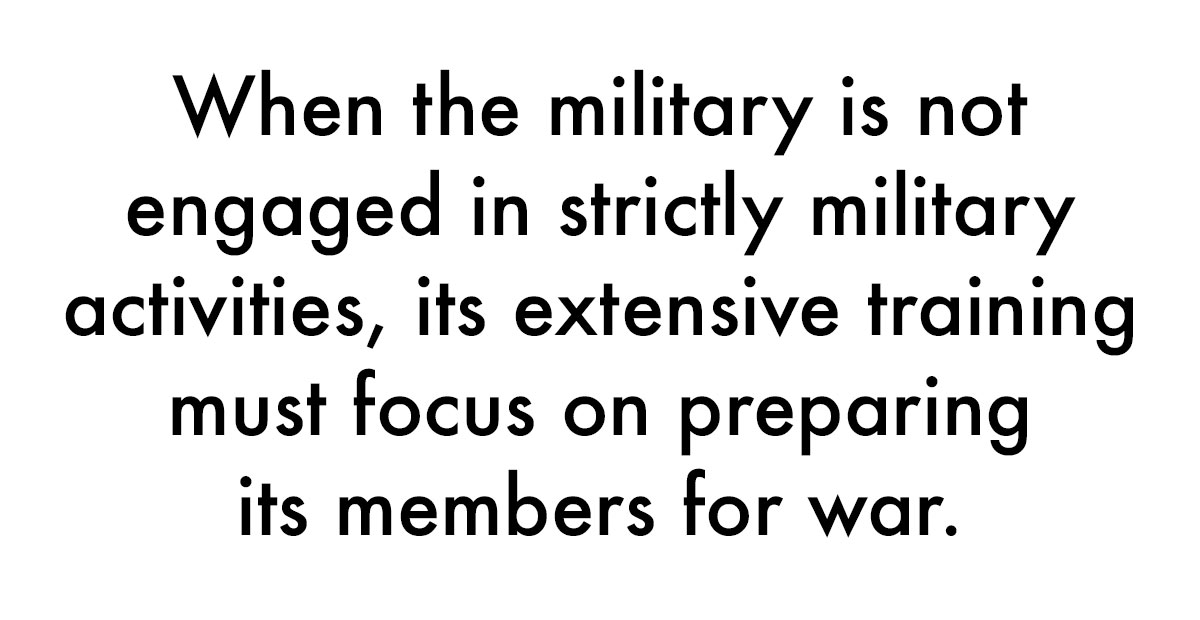 Militaries are unique because of their licence to use violence on behalf of the state. And to do so effectively they must be, in effect, self-contained institutions. A well-prepared military such as the CAF has its own communications, transportation, resupply, logistics, medical and other systems. It even has its own justice system (subject to the Canadian constitution).

In times of natural disaster or civil emergency, the military—regular forces or reserves—is expected and is an excellent means to support civic disaster responses. In Canada, that has ranged from fighting floods, forest fires, ice storms, even plowing the snow-bound streets of Toronto. And in the COVID-19 crisis, the military was called upon to aid governments in a variety of ways.

It is fitting that they do so. But all these activities could conceivably be carried out by other institutions. War cannot. So when the military is not engaged in strictly military activities, its extensive training must focus on preparing its members for war.

This is not easy, because war is certainly one of the hardest things humans face. It takes years of intensive training to prepare military members for the application of violence. Today, when they are expected to be proficient with highly technical weapons and equipment, training is more important than ever.

So by all means use the military if necessary in times of natural disasters—earthquakes, pestilence, forest fires—but don’t burden them with the additional task of training to be medical personnel.