Tomb of the Unknown Soldier turns 20 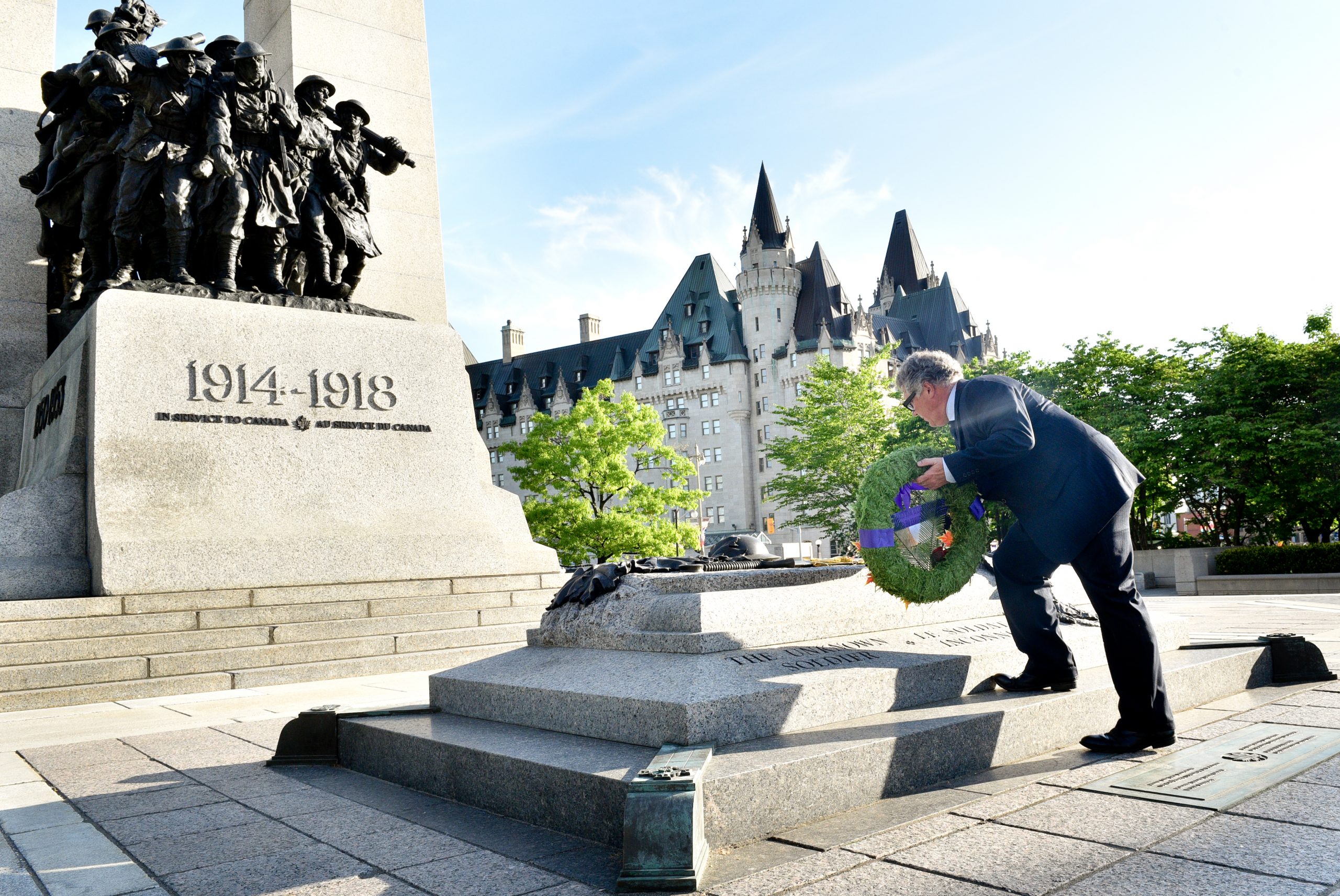 A representative of the Commonwealth War Graves Commission places a wreath on the Tomb of the Unknown Soldier, which was added to the National War Memorial in Ottawa in 2000.
Commonwealth War Graves Commission
More than 20 years ago, The Royal Canadian Legion set out to honour some 115,000 Canadians who made the ultimate sacrifice in two world wars, Korea, South Africa and Afghanistan. The effort culminated in a ceremony in France, where the remains of an unknown Canadian soldier killed at Vimy Ridge in 1917 were exhumed from his grave and brought home to Canada.

On May 28, 2000, the remains were laid in state at the Hall of Honour in Parliament before they were interred in the shadow of Canada’s National War Memorial to lie in anonymity for time immemorial.

During those two decades, the Tomb of the Unknown Soldier has become a focal point where, spurred by Canadians’ renewed sacrifices in Afghanistan, thousands of attendees have laid their poppies at the conclusion of the annual Remembrance Day ceremonies. 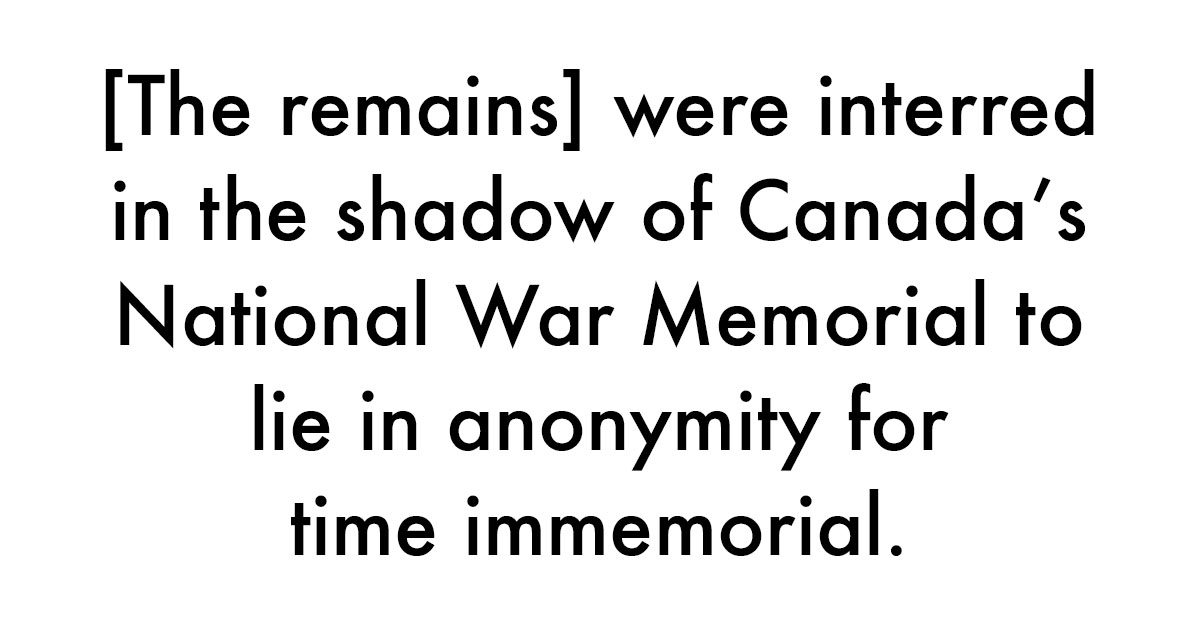 “During these difficult times it is more important than ever for Canadians to reflect on those who served and gave their lives so that we could live safely and freely,” said Loveridge, who oversees military graves of Commonwealth veterans in the Americas.

“The Tomb of the Unknown Soldier is one of CWGC’s most prominent war graves that honours all those who died in anonymity serving Canada. We will continue to maintain this piece of Canada’s history and remember those it represents.” 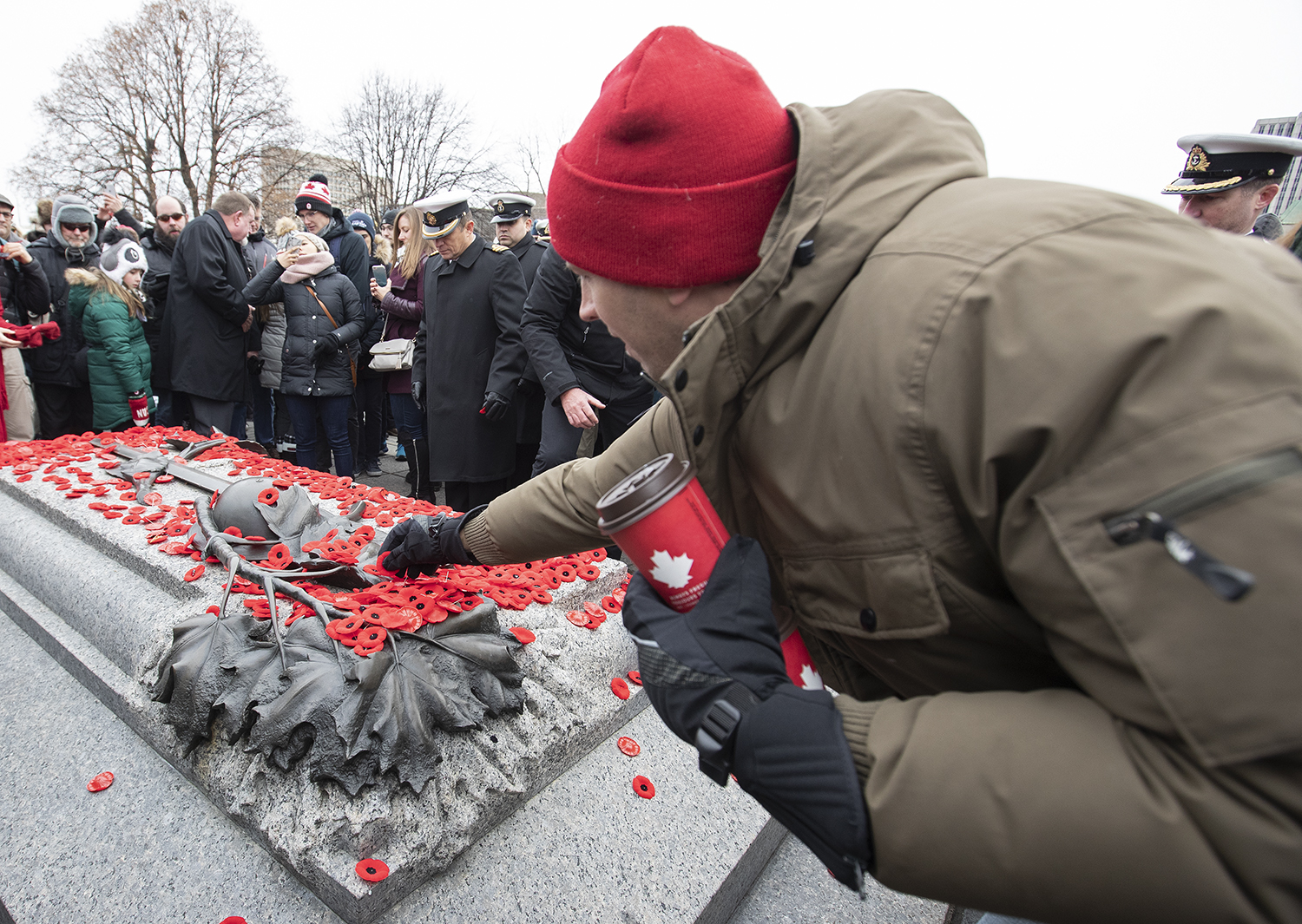 A man adds his poppy to the Tomb of the Unknown Soldier on Nov. 11, 2019.
Stephen J. Thorne/Legion Magazine
It was Lieutenant-General Romeo Dallaire, part of the group planning the millennium project, who argued against initial intentions to inter a casualty from the South African War (1899-1902), which was technically Canada’s first overseas war.

The tomb was designed by Canadian artist Mary-Ann Liu. The sarcophagus contains soil from the soldier’s original grave in France, each province and territory, and a feather to represent Indigenous Peoples.

The memorial’s bronze sculptures include key elements of the stone carving on the Vimy Memorial altar: a medieval sword, a helmet, and branches of maple leaves symbolizing victory and death.

Four bronze corner pieces complement the structure—three reproductions of the Canadian Memorial Cross and a poppy, the symbol of remembrance.

Sixteen months after the ceremony, al-Qaida terrorists hijacked four airliners and brought down the twin towers of the World Trade Center in New York and part of the Pentagon in Washington, DC. One aircraft crashed in a Pennsylvania field.

Twenty-four Canadians died in the attacks. Within weeks, Canadian special forces soldiers joined American and other coalition troops in Afghanistan, where the hijackers and other terrorists were trained under the leadership of the attacks’ mastermind, Osama bin Laden. Canadian regulars soon joined the fight.

After years serving on obscure and thankless peacekeeping missions around the world, Canadian troops were back on the front lines, their first offensive engagement since Korea in 1953. Over 13 years—Canada’s longest war—some 158 Canadian soldiers are known to have died, reawakening the Canadian public to the role its military has played over the century and a half since Confederation.

The notion of commemorating soldiers who died anonymously with a tomb containing the remains of a single unidentified soldier emerged after the First World War which, at the time, was considered The Great War, the war to end all wars.

About 8.6 million soldiers from all sides died in WW I. Motivated largely by the draconian terms of its unconditional surrender, Nazi Germany started another war of conquest in 1939. Some 75 million people died between 1939 and 1945, about 20 million of them military personnel.

Of the more than 66,000 Canadians who died in the First World War, almost 20,000 have no identifiable grave. 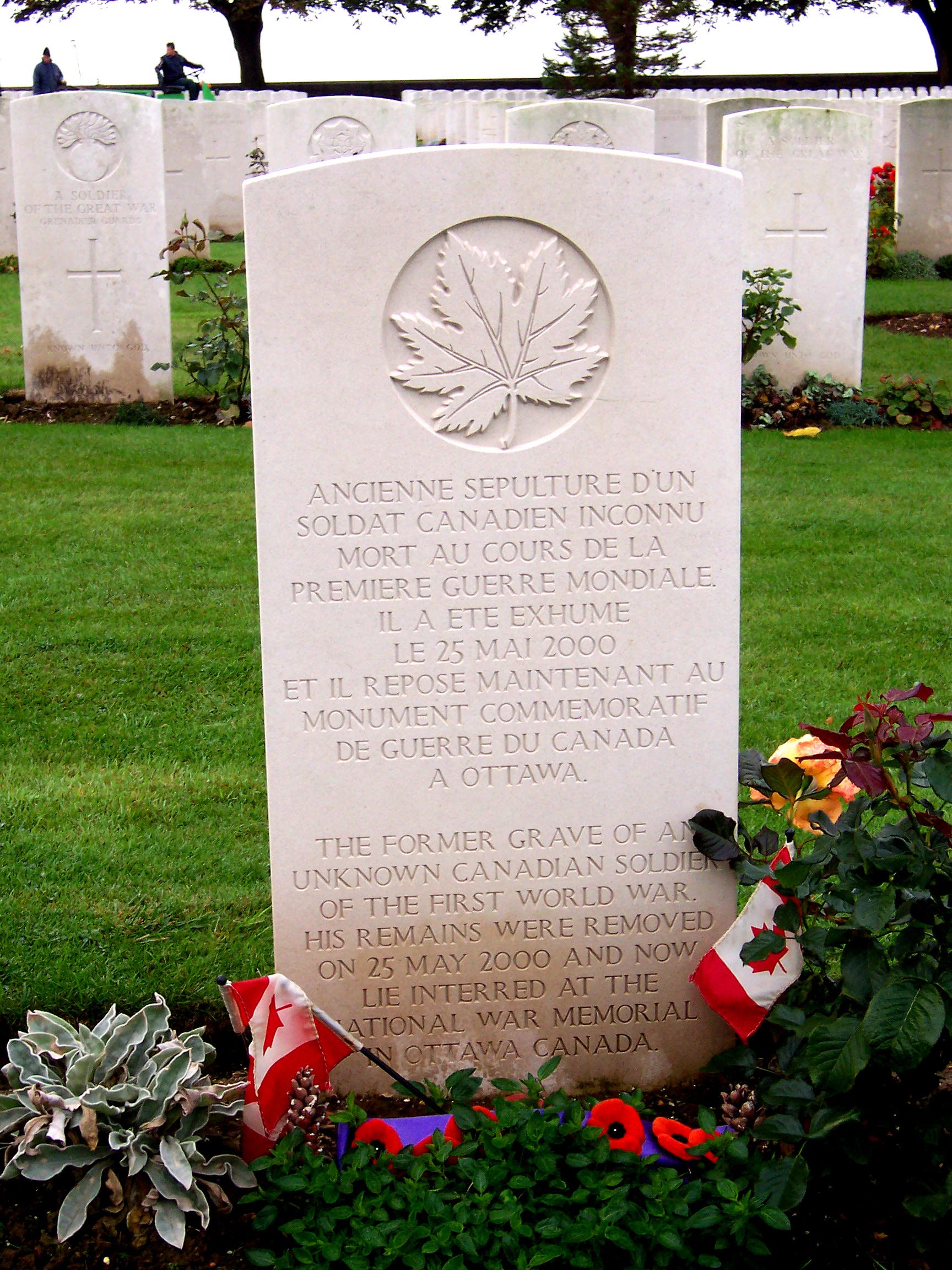 A headstone marks the original grave of Canada’s unknown soldier at the Cabaret-Rouge British Cemetery in France.
Commonwealth War Graves Commission
As early as November 1916 in France, a local officer of Le Souvenir français proposed the idea of burying “an unknown soldier.” The proposal went to the French parliament in November 1918 and passed the following September.

In Britain, Reverend David Railton proposed a similar initiative after he saw a grave marked by a rough cross while serving in the British Army as a chaplain on the Western Front. It was inscribed in pencil with the words “An Unknown British Soldier.”

Both countries planned symbolic funerals and burials of a single “unknown warrior.” Railton proposed that the British version include a national monument. The idea received high-level backing and widespread public support.

The United Kingdom and France held ceremonies on Armistice Day 1920. In the UK, the Tomb of the Unknown Warrior was created at Westminster Abbey, while in France La tombe du soldat inconnu was placed in the Arc de Triomphe.

The idea soon gained traction around the world. The United States unveiled its own Tomb of the Unknown Soldier in 1921 at Arlington National Cemetery, across the Potomac River from Washington, D.C.

The Americans have since entombed the remains of unknown soldiers from the Second World War, Korean War and Vietnam at the site.

Other nations have followed suit—at least 58 to date. In Chile and Ukraine, second unknown tombs were unveiled to commemorate The Unknown Sailor.

With the advent of DNA analysis, scientists have been able to identify human remains as far back as the War of 1812. At least one unknown combatant whose remains were memorialized as such has been identified by DNA analysis—an airman from the Vietnam War.

Since 2007, the National Defence Casualty Identification Program has identified 31 Canadians and 19 foreign nationals through a variety of methods, including historical, archaeological and anthropological research; laboratory sciences; forensic odontology; genealogy; and artifacts. It has buried five sets of unidentifiable remains.

War dead from the two world wars, Korea and other conflicts are buried overseas in lands offered up for the purpose by the countries in which they fell.

Canada changed its policy against the repatriation of war dead in July 1970 and now brings their remains home for burial at a site chosen by their families.

The Commonwealth War Graves Commission commemorates the 1.7 million Commonwealth servicemen and women who died during the two world wars. It operates in more than 23,000 locations in more than 150 countries and maintains an extensive records archive. 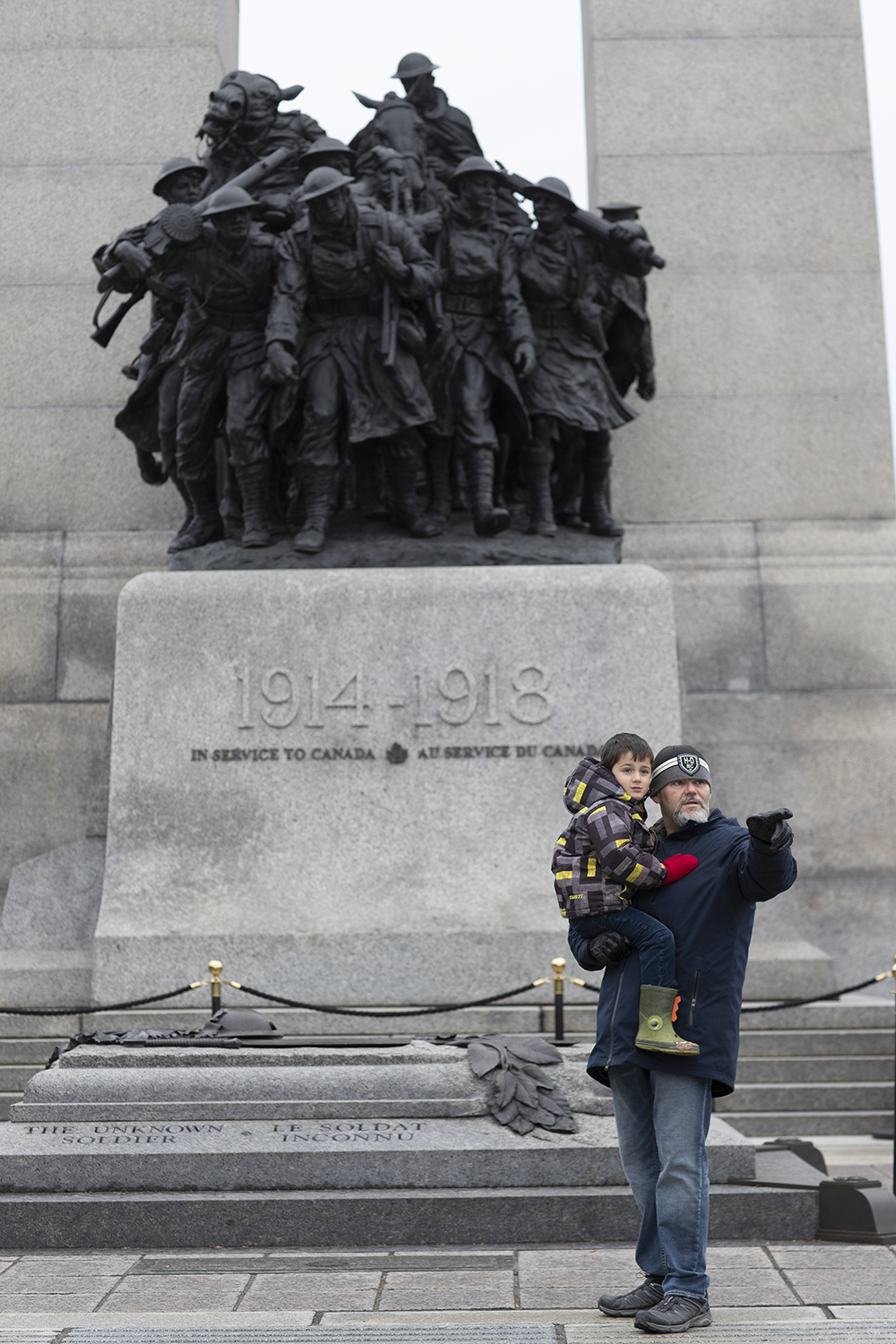 A man and his son visit the National War Memorial and the Tomb of the Unknown Soldier in Ottawa on Nov. 10, 2019.
Stephen J. Thorne/Legion Magazine