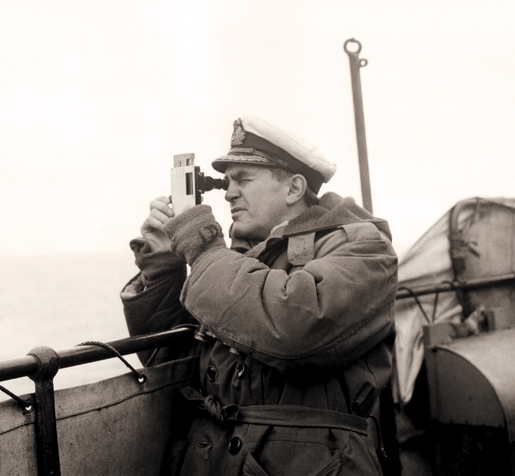 Captain James Douglas (Chummy) Prentice scans the horizon on board the Flower-class corvette HMCS Chambly, part of the Newfoundland Escort Force.
DND/LAC/PA-204284
As a boy growing up in Victoria, James Douglas Prentice knew he wanted a naval career, but his English-born father refused to let him join the newly formed Canadian Navy, so Chummy, as he was known, spent the next 22 years in the Royal Navy, which he joined as an officer cadet in 1912.

He rose steadily to lieutenant-commander, but when it became clear the Depression was going to stall his career at that rank, he took early retirement and returned to British Columbia. His second naval career, during the Second World War, was where he would make his mark.

He quickly accepted an offer of a commission at his former rank in the Royal Canadian Navy at the start of the war. When he went to Halifax in 1940 to take command of HMCS Lévis, he reconnected with Commodore Leonard Murray, commander of the Newfoundland Escort Force (NEF), whom he knew in his first career. Murray involved Prentice in the breaking-in problems of the first corvettes.

In March 1941, Prentice was made senior officer of the first seven corvettes of the escort force and given command of HMCS Chambly. He was “an experienced saltwater sailor, a fine ship handler, an extremely competent officer and a tactical innovator,” according to In Peril on the Sea, published for the Canadian Naval Memorial Trust. The first NEF escort group to sail on convoy duty put to sea on June 2.

On June 10, Chambly’s aggressive patrolling is credited with driving off a U-boat in dense fog. 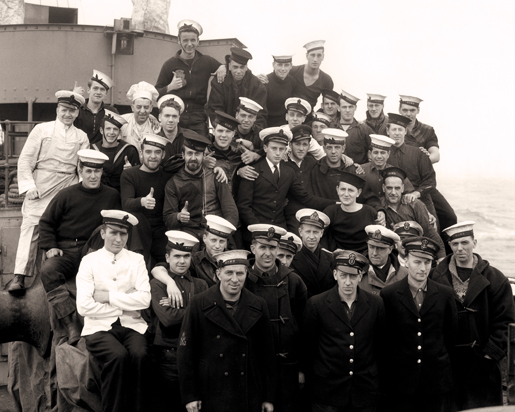 Personnel of HMCS Chambly in May 1941.
LAC/PA-115351
He was also popular, says the publication, not least because he wore an intriguing monocle. When his crew all showed up for inspection with monocles, instead of acting offended, he said ‘Try this,’ and tossing his head, flipped the monocle into the air and caught it neatly between the eyebrow and lower eyelid, without use of his hands. Instead of dressing down his crew, he is reputed to have said “When you can do that, you can all wear monocles.”

“He was much loved by his crew,” noted In Peril.

That in spite of his insistence on hard work and high standards, but he was also known for his fairness. He was described as “persistent almost beyond endurance at times,” said Commander Wallace B. Creery, who took over command from Murray.

Knowing the covettes’ shortcomings, which included a shortage of signalling equipment, Prentice insisted on hard training at submarine hunting.

He trained his crew in quick attacks, during which a steady speed was maintained during the search and depth-charge attack, eliminating a sudden burst of speed that alerted U-boats. His tactical manual, Hints on Escort Work, was used by convoy escort commanders.

In 1942, Prentice was assigned to develop training for the new Canadian destroyers. He was given command of HMCS Ottawa in 1943, which played a part in sinking U-621 and U-984, following which Prentice was awarded the Distinguished Service Cross and bar.

In June 1944, Escort Group 11, under Prentice’s command, was designated the anti-submarine killer group. Prentice worked out methods for identifying submarines hoping to escape detection by lying on the bottom, sometimes surrounded by wreckage.

Prentice finished the war a full captain. He retired in 1946 and returned to British Columbia, where he died in 1979.