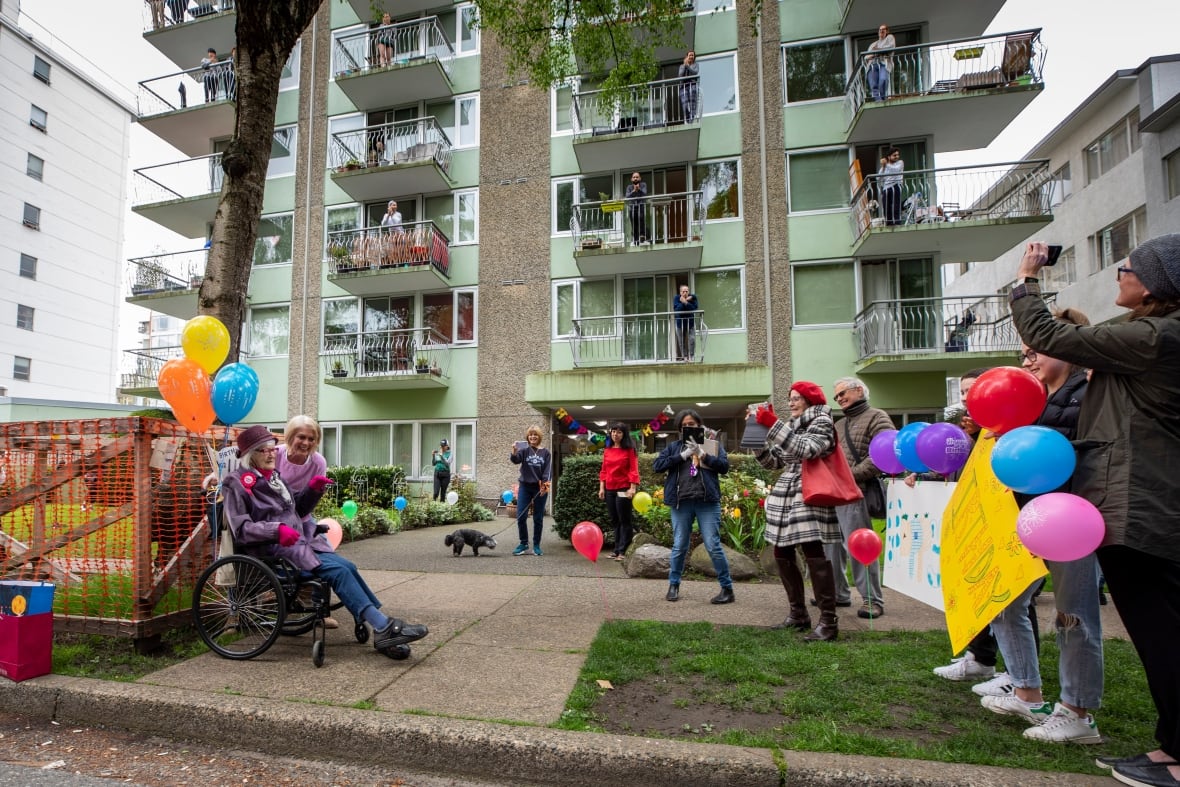 Surrounded by colourful signs and balloons, the centenarian sat outside her residence in Vancouver’s west end on April 28, watching fire crews and mounted members of the city police horse unit parade past while dozens of neighbours and friends cheered her on—at a safe distance from each other.

Daughter Catherine Houston said her mother, a lifelong horse lover, has enjoyed watching the mounted horsemen patrol past her home for years. The unit, based nearby, organized the party.

“These guys, the horses, the mounted unit, have been amazing to her,” said Houston, embracing her mother in her wheelchair. “They’ve been wonderful to her for years. She’s done a lot for her country. She just feels very loved.”

One attendee played a saxophone version of Happy Birthday for McDonald while the crowd sang along. McDonald opened presents and chatted with family on Zoom and an old friend on FaceTime before taking a nap.

“We don’t do a lot for our elderly,” said Houston. “They go unnoticed.”

That seems to be changing in these changing times, however.

With COVID-19 sweeping through nursing homes and retirement residences, the greatest generation has become the most vulnerable generation, finding itself on the front lines again, this time facing a global pandemic that by early May had claimed 250,000 lives worldwide, 3,900 of them in Canada.

The worst-hit province, Quebec, accounted for more than half the coronavirus-related deaths in Canada, and more than 80 per cent of them occurred in long-term care homes. In Ontario, the figure was close to 70 per cent.

For the dwindling numbers of Second World War veterans—and the aged generally—the ordeals of quarantine could seem trivial given all that they have seen and experienced. Many have survived pandemics of the past, not to mention The Great Depression, a world war, a Cold War, and untold other trials and tribulations. 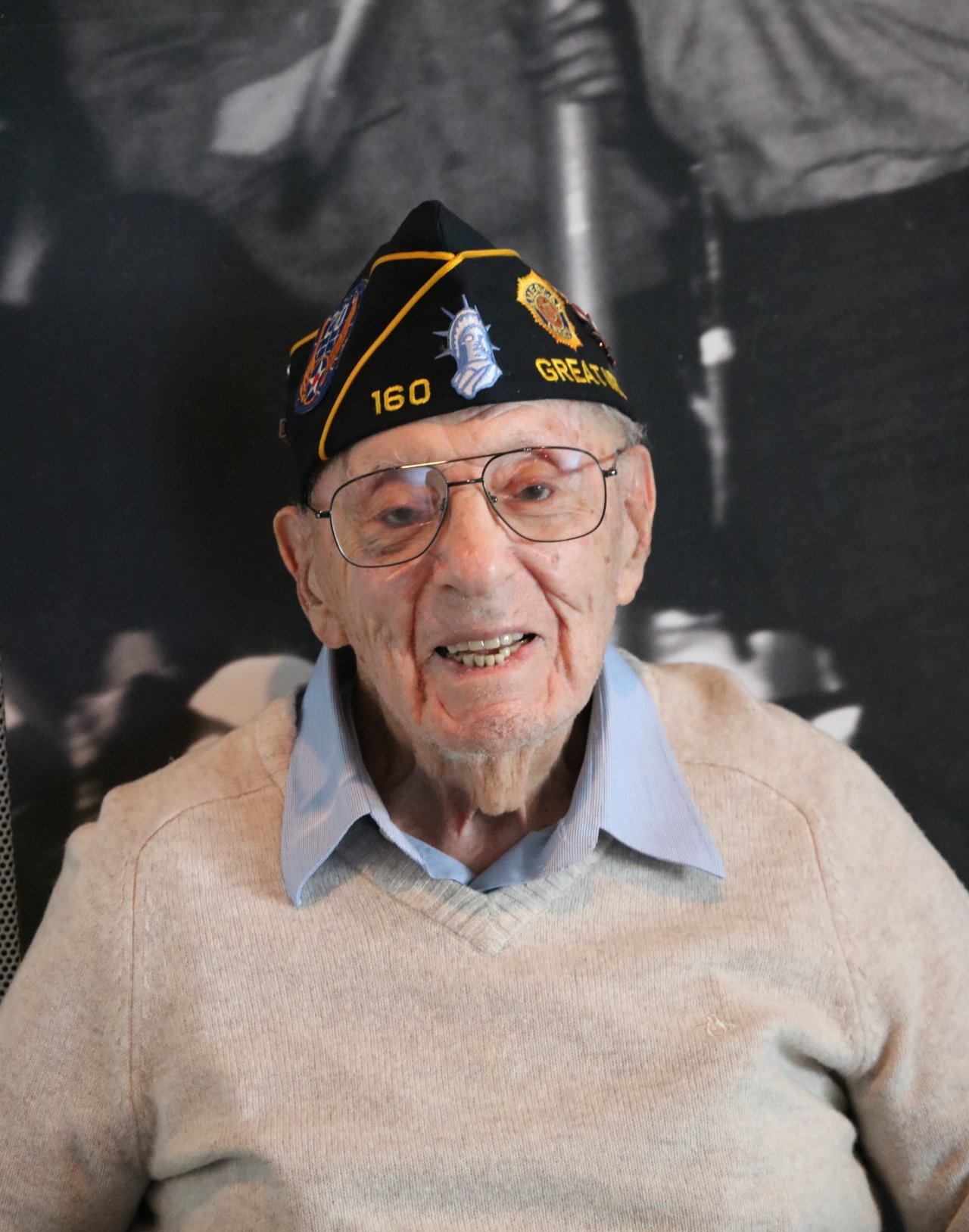 Decorated Second World War air force veteran Philip Kahn, 100, died on April 17 from COVID-19. His twin brother died in the 1918 Spanish flu pandemic.
New York Times via Kahn Family
In Long Island, N.Y., a 100-year-old man whose twin brother died during the 1918 Spanish flu pandemic died from COVID-19 on April 17. He is Philip Kahn, a decorated Second World War air force veteran. His brother Samuel died weeks after they were born in 1919 in one of history’s deadliest pandemics.

“He always had a motto that history will always repeat itself, and he knew that there was possibility of a pandemic again,” said his grandson, Warren Zysman.

“He was completely with it at the end,” added his granddaughter, Corey Karlin-Zysman. “He knew what was going on, and he definitely put two and two together and saw the irony in this.”

Even before the pandemic reached its peak, widespread recognition of the elderly and all that they’ve been through was no longer limited to remembrance days and other ceremonial occasions. Those who are left from WW II are celebrating landmark birthdays—more than any generation before them. 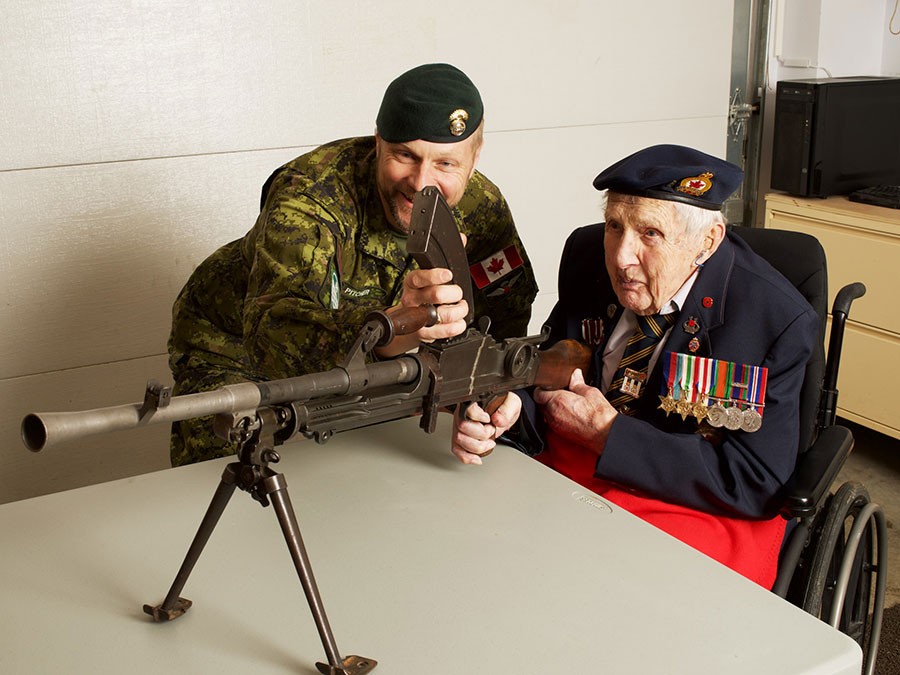 Fred Arsenault made headlines when his wish for 100 birthday cards for his 100th birthday on March 6 went viral. What he got went well beyond his expectations. The surprises included the arrival of Lieutenant-Colonel Barry Pitcher, commanding officer of the Princess Louise Fusiliers, who brought along an inert weapon Arsenault had not seen since the Second World War—a Bren machine gun.
Trevor Godhino
In Toronto, Second World War veteran Fred Arsenault wanted 100 cards for his 100th birthday on March 6. Son Ron put out an appeal on social media in February and his dad received more than 90,000.

Arsenault, an army private who as a member of the Cape Breton Highlanders helped liberate Italy and the Netherlands, got cards via the mail from all over the world. Some were handmade and many were from children.

“Thank you for all your words and for the people that were all here for my birthday,” a smiling Arsenault said after blowing out candles on a cake at the Veterans’ Wing of Sunnybrook Health Sciences Centre where he lives.

“I’ll remember this for quite some time.”

The Princess Louise Fusiliers, a reserve light infantry regiment based in Halifax, got wind of the campaign and arranged to hand-deliver the Prince Edward Island native a birthday card. The unit commander, Lt.-Col. Barry Pitcher, arrived carrying a Bren gun just like the one Arsenault humped around Europe more than 75 years ago. The former infantryman hadn’t touched one since the war ended.

“The moment was amazing,” Pitcher told CBC via e-mail. “Fred cried when he saw the gun and kissed it gently. When asked if he remembered it, he stated, ‘I sure do.’”

Arsenault was also presented with a plaque of gratitude from the government of the Netherlands, a country he and other Canadian soldiers helped liberate during the Second World War.

Even Canada Post workers got in on the action, ensuring the veteran received his well-wishes on time. Peter Welter, a manual sorter on the night shift, said he came across two cards for Arsenault that were not mailed correctly.

“We have boxes and boxes all over the place,” Ron said before the big event. “We just received 700 cards in one box from students.” Family and friends helped with the sorting. Unsolicited donations were directed to charities.

Arsenault wasn’t the first to be feted in such a way. 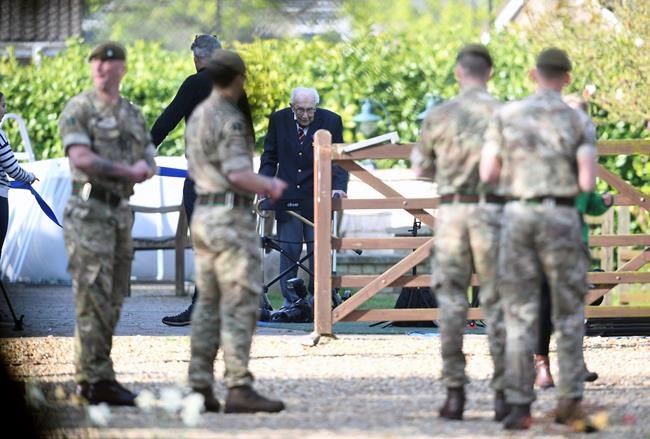 Captain Tom Moore raised more than $55,000 for Britain’s National Health Service charities by walking 100 laps of his garden before his 100th birthday on April 30. Soldiers from the Yorkshire Regiment, a unit linked to Moore’s former British army regiment, lined the paved walkway in his Bedfordshire backyard, forming an honour guard for the veteran’s final laps.

Back in October, Texas-based veteran James South put out a similar appeal for 100 cards for his 100th birthday via staff at the assisted living facility where he lives. He received 60,000. There have been others.

Despite their age, some aged veterans are still giving back in novel ways.

In England, veteran Tom Moore aimed to raise £1,000 (about C$1,750) for National Health Service charities by walking around the patio of his retirement residence 100 times to mark his 100th birthday. By his birthday on April 30, the tally was more than £31 million (C$55 million) and counting.

Moore, a cancer survivor who recently recovered from a broken hip, said he set out to raise money “for the sake of the nurses and the NHS we have, because they are doing such a magnificent job.”

The former captain in the British army was subsequently bestowed the honorary rank of colonel, received a card from the Queen, and was treated to a flypast by two Second World War icons, a vintage Spitfire and Hurricane.

He was also presented with a replacement Defence Medal (United Kingdom) ahead of this year’s VE-Day celebrations. Prime Minister Boris Johnson recorded a message, calling Moore “a point of light in all our lives.”

“I know I speak for the whole nation when I say we wish you a very happy 100th birthday,” said Johnson, who credited NHS staff with saving his life during his bout with COVID-19 last month.

“Your heroic efforts have lifted the spirits of the entire nation, you’ve created a channel to enable millions to say a heartfelt thank you to the remarkable men and women in our NHS who have all been doing the most outstanding job.”

Moore-related donations to the cause closed at midnight on April 30. Ellie Orton, chief executive of NHS Charities Together, said Moore’s efforts “will make a lasting difference” in the lives of the NHS staff and volunteers.

The celebrant spent most of his big day self-isolating with daughter Hannah Ingram-Moore and her family at his home in Marston Moretaine, Bedfordshire.

“Reaching 100 is quite something,” he said. “Reaching 100 with such interest in me and huge generosity from the public is very overwhelming.

“Please always remember, tomorrow will be a good day.”