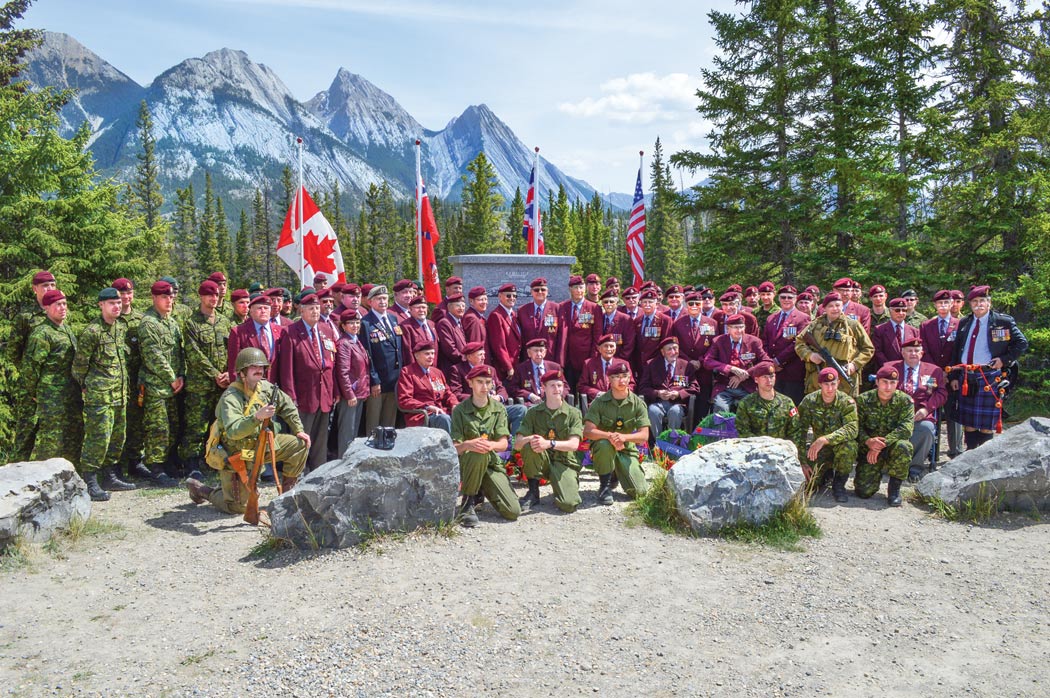 A commemoration ceremony is held at the monument dedicated to the 1st Canadian Parachute Battalion, north of Banff National Park in Alberta in 2018.
Canadian Airborne Forces Website
With the formation of the Canadian Airborne Regiment on April 8, 1968, the Chief of the Defence Staff General Jean Victor Allard achieved his dream of a flexible immediate response force. He intended it to be quite different.

“This regiment would not reflect the identity of a Victorian-era regiment because its members would serve in it for only a short period,” he wrote. He intended young infantry soldiers and officers would rotate through the regiment, serving a maximum of two years before returning to their own regiments. But that changed over time and the Airborne became a separate regiment that kept its members as long as possible.

He also intended brief deployments, the regiment holding the fort in hot spots until a heavier and better-equipped brigade could arrive on scene.

The regiment, all volunteers and active paratroopers, was formed in Edmonton, and then moved to Petawawa, Ont. Initially, it had two infantry commando units, one artillery battery, a service company and an engineer and a signal squadron.

The Airborne deployed to Quebec during the October Crisis in 1970 and to Cyprus in 1974, during which 30 were wounded and privates Lionel Gilbert Perron and Jean Claude Berger were killed, the first army combat casualties since the Korean War. The regiment also provided counter-terrorism support at the Montreal Olympics in 1976.

As dreams are wont to do, Allard’s morphed into something different.

In 1977, the regiment moved to Petawawa and was amalgamated into the new Special Service Force, becoming the core of the Airborne Battle Group.

Its primary role, says the Airborne Association website history, was “to provide a quick reaction force in support of national security, North American defence and international peacekeeping. In addition to these roles, the regiment must prepare for limited and general war in conjunction with other forces.”

“The Airborne programme was so successful that Belet Huen Humanitarian Relief Sector was declared ‘secure’…in a period of less than three months…[and] and its humanitarian effort was even more praiseworthy,” wrote Bernt Horn and Michel Wycyzyski in Canadian Airborne Forces since 1942.

But those achievements were overshadowed by scandal. During deployment, troops were administered the anti-malaria drug mefloquine, without proper monitoring of adverse side-effects. It is now known to cause hallucinations and psychotic behaviour, side-effects some veterans strongly believe contributed to two Airborne troops beating a 16-year-old Somali prisoner to death.

After an inquiry, the Canadian Airborne Regiment was disbanded Sept. 1, 1995.

PrevPrevious ArticleCOVID-19: War is not the answer
Next ArticlePrime minister invokes memory of war in stirring pandemic speechNext