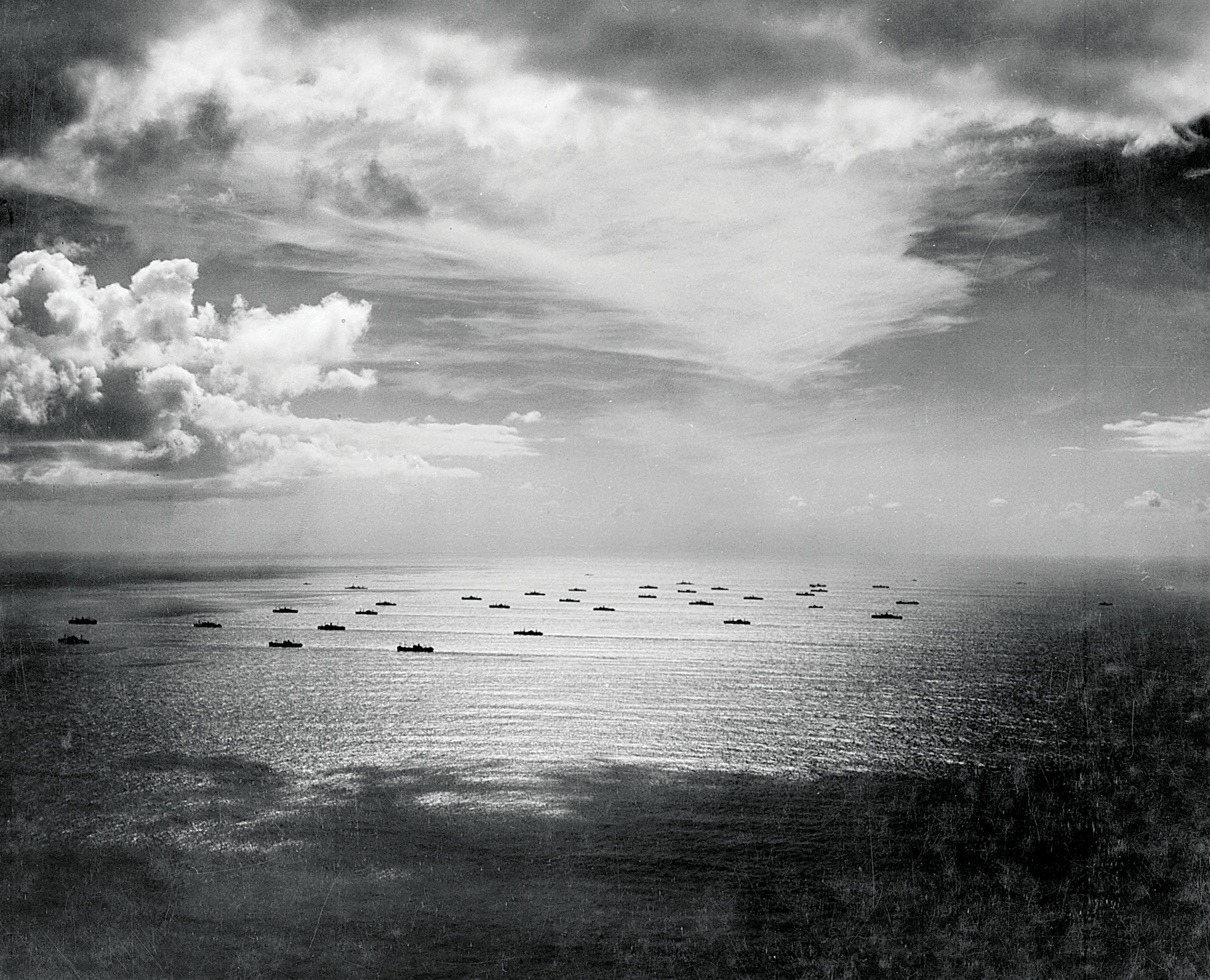 Deserted and covered with graffiti for decades, the old concrete gun battery at Chapel Point in North Sydney on Nova Scotia’s Cape Breton Island was restored last summer as part of a local project to create a 48.5-hectare park devoted to Canada’s military history.

The project, to be known as the Atlantic Memorial Park, is run by local volunteers who want “to create a seaside journey of remembrance that brings Canada’s military history home.”

Sydney played a significant role in the Second World War as the second-most-important port for convoy formation after Halifax. In those days before Newfoundland joined Canada, Sydney was known as the most easterly city in North America, which meant between 1939 and 1945, it was also the Canadian city closest to the war.

When France, Belgium and the Netherlands collapsed, Britain was cut off from its major sources of supply in Continental Europe. It became dependent on Canada and the neutral United States for most of its food, lumber and fuel, let alone the men, women and supplies to help fight the war.

Those things had to get to Britain in ships crossing the stormy North Atlantic Ocean. Germany was fully aware of that and tried to starve Britain into submission by blockading the country and destroying its supply chain. To accomplish this, Germany unleashed its fleet of deadly submarines, or U-boats, in what became known as the Battle of the Atlantic, the longest battle of the Second World War. 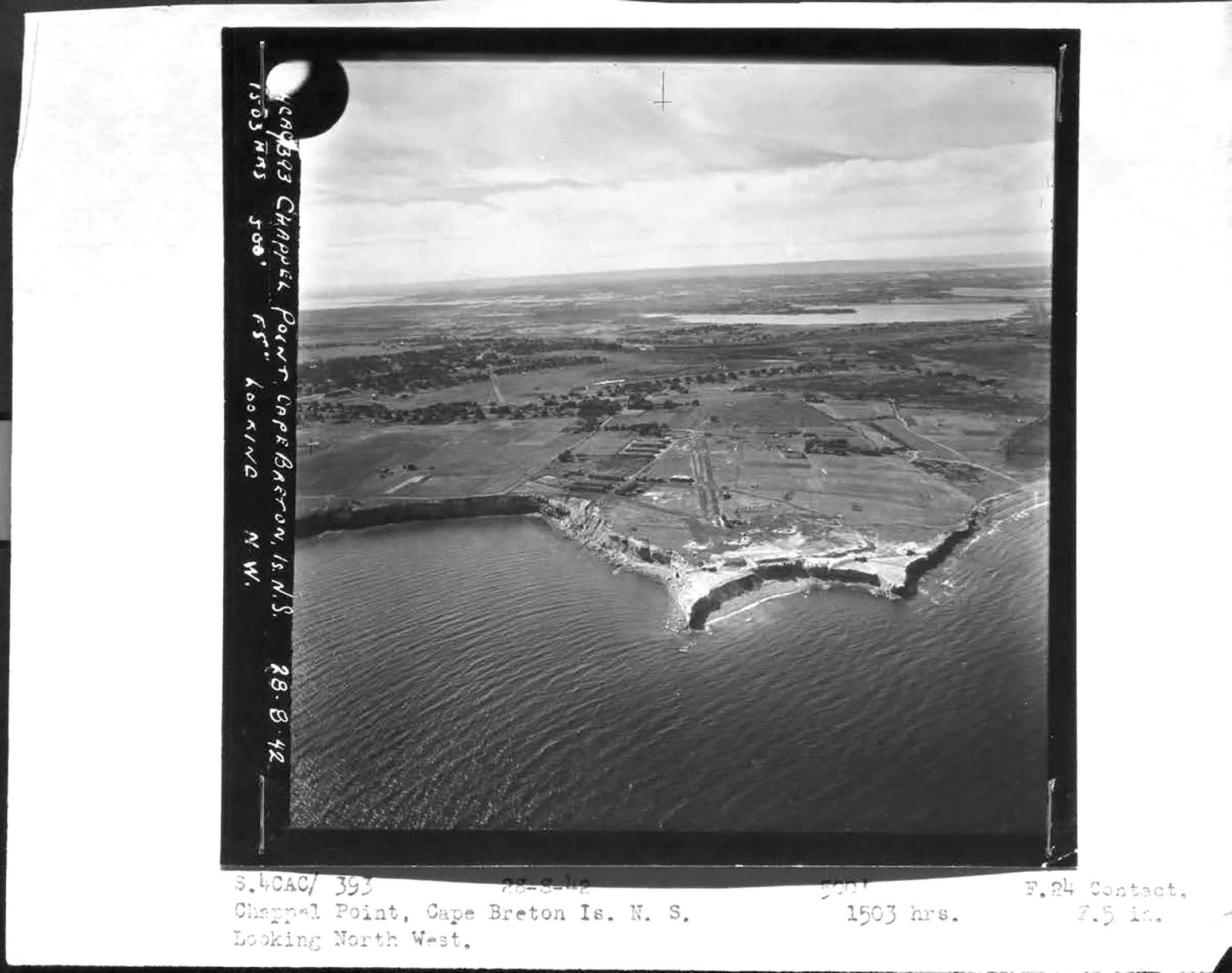 Chapel Point as seen from the air during the war was the site of a major defensive battery.
Atlantic Memorial Park Society

As historian Marc Milner pointed out in The Battle of the Atlantic: Canada’s War at Sea in Canada’s Ultimate Story, “The Battle of the Atlantic was the only major campaign of the Second World War shaped by primarily Canadian factors. For it was not simply the Royal Canadian Navy’s war, it was Canada’s premier wartime effort. By the spring of 1943, Canada was the second-most-important Allied player in the North Atlantic after Britain. Nearly half of all the escorts operating between New York and the U.K. were Canadian. Most were Canadian-built and most operated from Canadian bases.”

On the western side of the bay was Cape Breton’s main employer, the Dominion Steel and Coal Corporation (DOSCO). With the rush to build and repair ships, its steel, and the coal used to fuel many of the merchant ships, were greatly needed.

Like the rest of Canada, Sydney was hardly ready for war in 1939. It had played a major role in the First World War, but only in the later part, as authorities came to realize the safest way to get ships to Britain was in convoys.

What fortifications had been built had long been disarmed and stood in disrepair. Little happened until the fall of France in 1940 led to the crisis in Britain. 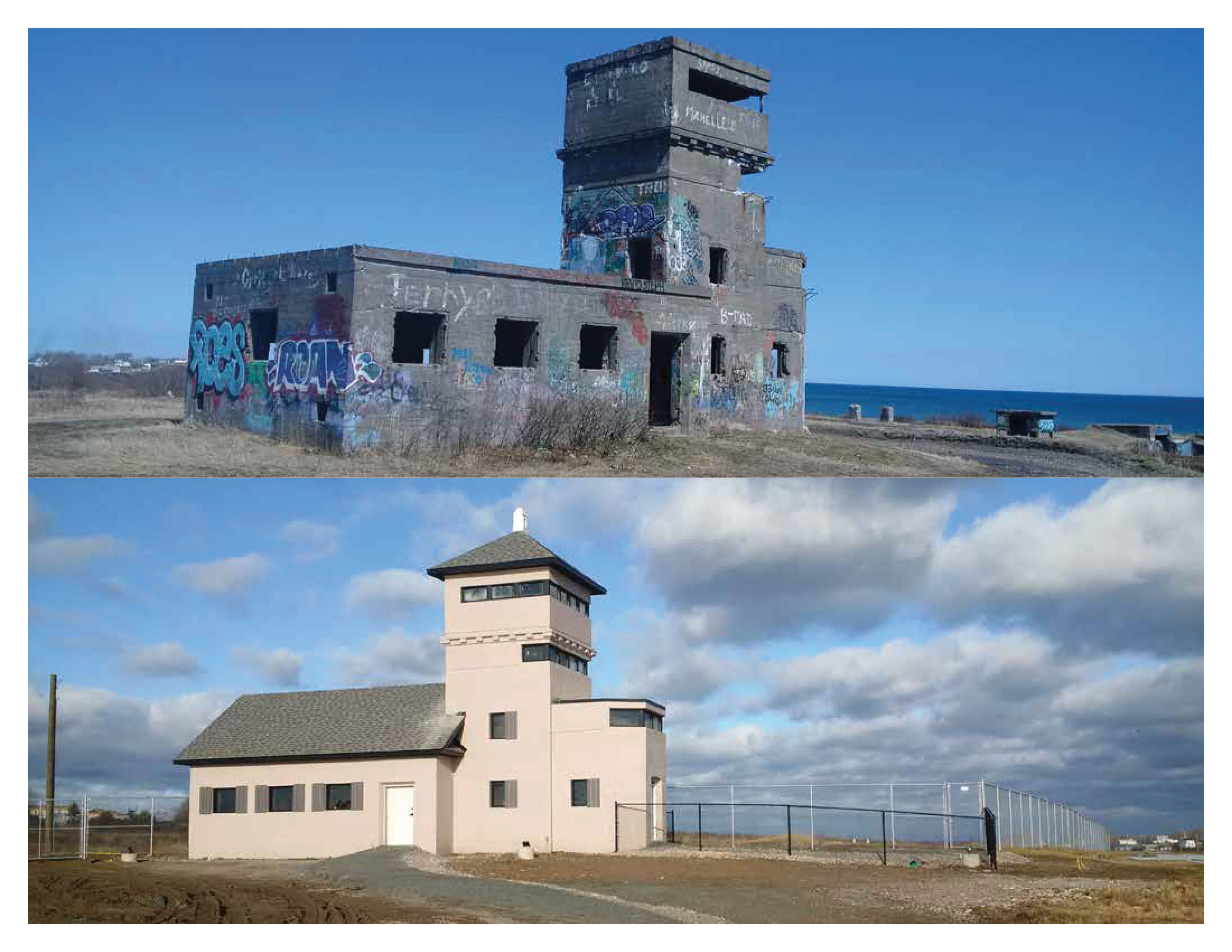 The battery as seen in the spring of 2019 and after restoration in October.
Tom MacGregor; Atlantic Memorial Park Society

In the spring of 1940, Halifax was able to supply Sydney with only two trawlers, fitted as minesweepers, and an RCMP patrol vessel. In August, the harbour received Reindeer and Husky, two American yachts that were intended for escort service. Two tugboats were sent to Sydney to act as examination vessels. By the end of the summer, another minesweeping trawler and two more yachts were added.

The city began to take on a military look as the dockyard area was fenced off for security reasons and new quarters and facilities were built for the naval personnel coming to the city.

Work also began on the abandoned fortifications. Five artillery stations were planned with the one at Chapel Point operating first with responsibility for supporting marine inspection operations. The Cape Breton Highlanders and the Pictou Highlanders were pressed into active service guarding the fortifications and the airport. The 16 Coast Brigade was activated to provide gunners. A fire command post was built on high ground along Kilkenny Lake Road between South Bar and Point Petrie. Wood huts were eventually built at all the batteries to house the men who spent their first few months sleeping under canvas.

The Royal Canadian Air Force also began constructing an aerodrome in Reserve Mines east of Sydney. (Today, it is J.A. Douglas McCurdy Sydney Airport.) However, aircraft were desperately needed in Britain, so No. 8 Squadron had to make do with flimsy Delta aircraft during the first part of 1940. Eventually three sturdier Stranraer flying boats were added; they could escort convoys until sunset. 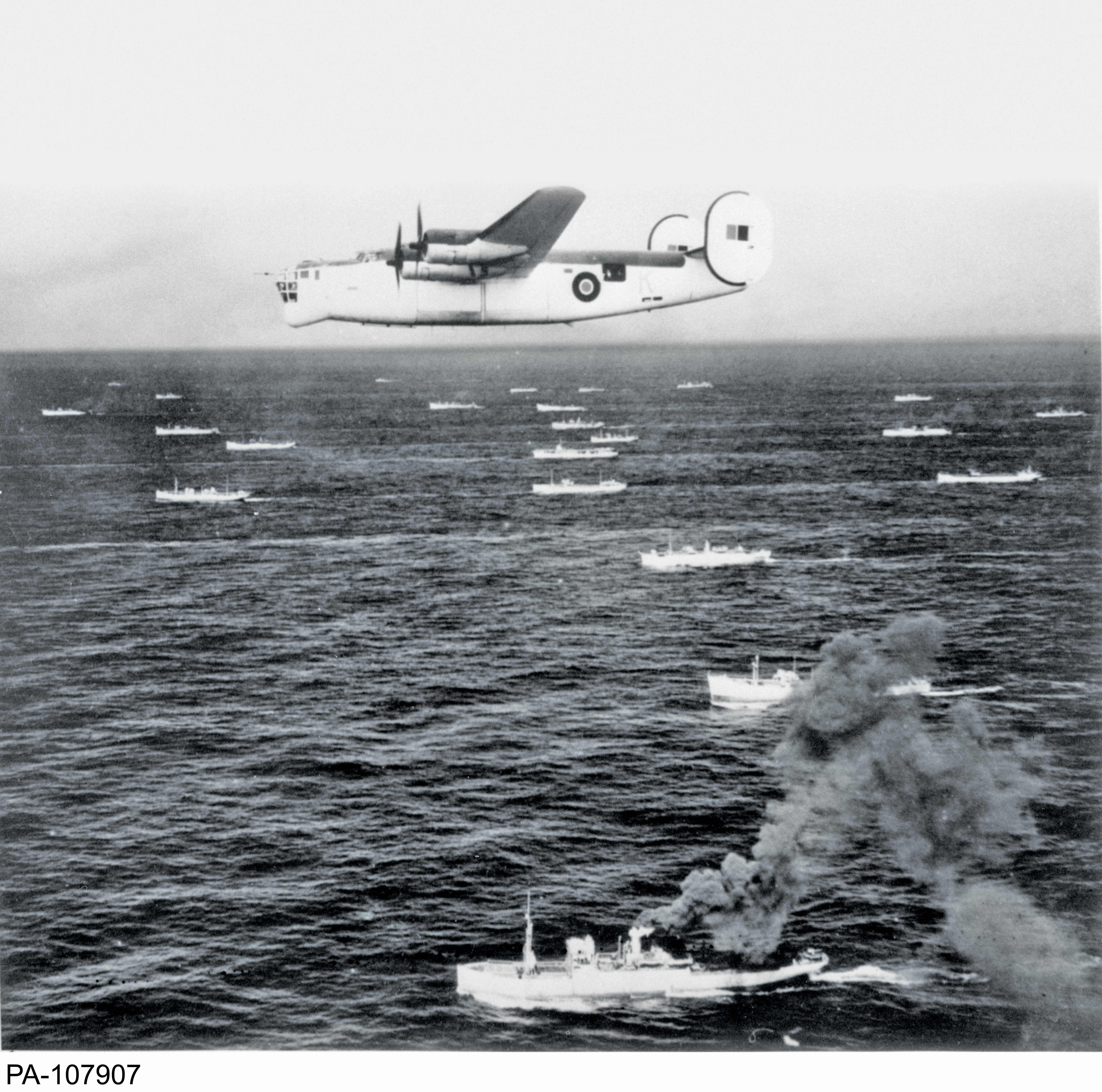 Merchant ships coming down the Saint Lawrence River were losing valuable days in transit by having to backtrack to Halifax to form into convoys. So Sydney became the gathering point for many of these ships, which would then join the convoys leaving Halifax at a rendezvous point on the Grand Banks.

On July 31, 1940, the first convoy consisting of 25 ships left Sydney to link up with convoy HX-62 which had left Halifax a day earlier. British authorities decided that Sydney would be the gathering point for ships that were faster than 7.5 knots but slower than 9 knots. These slow convoys were designated SC.

SC-1 sailed with 40 merchant ships on Aug. 15, 1940. The harbour then began an eight-day cycle between convoys. British authorities had hoped to keep the convoys under 30 ships but the need was pressing and the convoys seldom sailed with fewer than 30 ships.

SC-7 left Sydney on Oct. 5, and was the first convoy attacked by several U-boats working together as a “wolf pack.” It lost 20 of its 34 ships. By the end of the shipping season in 1940, 967 ships had left Sydney Harbour in 48 convoys.

As the war dragged on, better ships, including Canadian-made corvettes, became available for the escort service. The batteries were built up and the aerodrome was completed and expanded as better aircraft, capable of escorting the convoys farther out into the ocean were made available.

It wasn’t just the convoys to Britain that were protected by ships stationed in Sydney. Convoys also escorted ships coming from Montreal and Quebec City and ones going to Newfoundland to bring back coal for DOSCO. Later in the war, the RCN would guard ships bringing supplies to bases the United States was building in Newfoundland and Greenland.

When the United States declared war on Germany following the attack on Pearl Harbor on Dec. 7, 1941, Admiral Karl Donitz, commander of the U-boat fleet, declared all-out war on North America. His submarines found the Gulf of Saint Lawrence to be a particularly fertile hunting ground. U-boats even went up the Saint Lawrence River. During the 1942 shipping season, U-boats sank 20 merchant ships, a loaded U.S. troopship and two RCN warships, with a loss of only two U-boats.

Canada’s shipyards could not produce new ships and refit existing ones fast enough, so the federal government ordered the construction of a new naval base at Fort Edward, on the south arm of Sydney Harbour across from Sydney. The 344-hectare site was like a whole new town. Workshops and rail lines were close to the water. The rest of the base was laid out in a grid with streets for accommodation and a hospital. The new base became HMCS Protector II, while the original base in Sydney was HMCS Protector I.

On Oct. 13, 1942, SS Caribou, the ferry operating between Sydney and Port aux Basques, N.L., left Sydney at approximately 9:30 p.m., carrying 73 civilians, including 11 children, 118 military personnel and 46 crew. HMCS Grandmere, a minesweeper, escorted the ship, following at its stern in accordance with British naval procedures for escorting a single ship.

At 3:40 a.m. on Oct. 14, U-69 fired a torpedo, hitting Caribou on its starboard side. Most passengers were in their bunks and were thrown into confusion by the explosion. Several lifeboats were destroyed in the blast and others could not be launched. 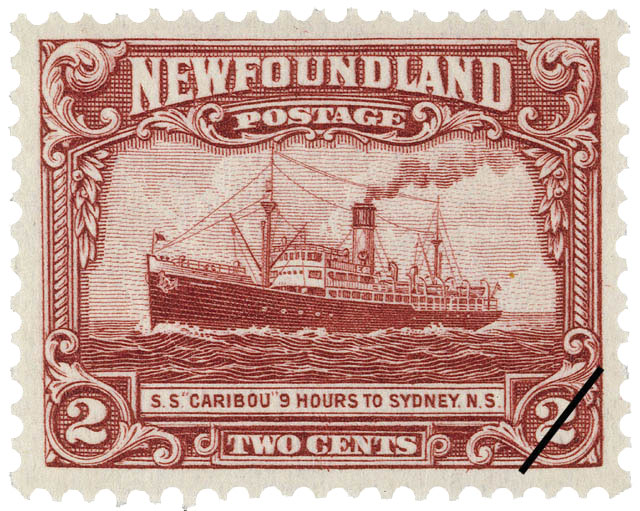 Grandmere saw the U-boat on the surface and attempted to ram it, but the boat submerged. The corvette dropped depth charges, but missed the sub. Following procedure the next two hours, Grandmere pursued the U-boat; stopping to rescue survivors would only make it an easier target. U-69 slipped away and Grandmere then returned to pick up survivors. Of the 237 people on board, 136 died. A 15-month-old boy from Halifax was the only child to survive.

The sinking of the passenger ship was strictly an attack of opportunity. It made no sense in terms of military strategy, but its effect on morale was significant, especially in Sydney and Port aux Basques where many of the victims had family and friends.

By then the residents of Sydney were getting used to life in a wartime port. Notices were put up near public telephones reminding users that it was forbidden to mention ships, ship movements, troops, war industries or even the weather.

Practice blackouts became common. During the first one, almost everybody with a car drove up to Hardwood Hill with their lights off just to see the city in darkness, according to historians Brian Tennyson and Roger Sarty. Air-raid wardens of all ages were appointed to conduct periodic air-raid drills.

On the brighter side, with all the servicemen in the city because of the war, community groups bonded together to organize dances and set up canteens where cigarettes, soft drinks and sandwiches could be bought. 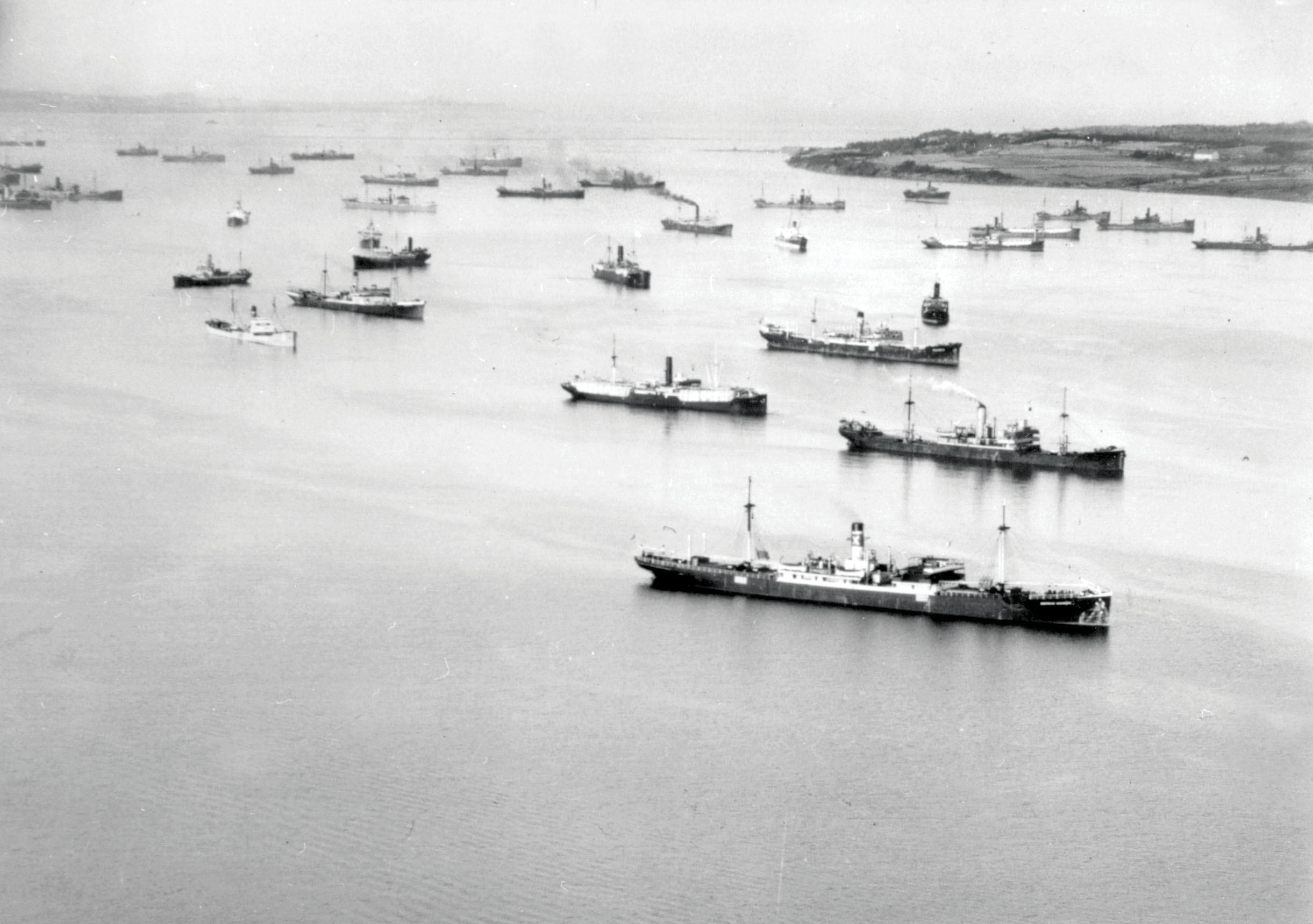 A convoy forms up in Sydney Harbour during the Second World War.
Atlantic Memorial Park Society

SS Burgeo was assigned to take over the passenger route between Sydney and Port aux Basques. On Nov. 24, 1944, it was escorted by HMCS Shawinigan and a U.S. Coast Guard vessel. Having learned a tragic lesson, it zigzagged while crossing and headed into port without incident. Shawinigan broke off and patrolled for U-boats on its own, telling Burgeo it would meet it in the morning for the return trip.

That night, Shawinigan crossed the path of U-1228, which was preparing to return to Europe after an unsuccessful hunt. The U-boat fired a GNAT acoustic-homing torpedo, which struck the corvette four minutes later. The ship exploded before it could signal for help. All 91 crew members were lost.

Burgeo left port in the morning but did not see Shawinigan for the entire trip. Since radio silence had been ordered, it was only when the ferry reached Sydney without an escort that the navy knew something was wrong. A three-day search found only a portion of the bridge and six bodies.

Once again, those lost at sea had been well known ashore and the community found itself in mourning.

The Battle of the Atlantic ended when the war in Europe ended on May 8, 1945. However, the news was not followed by the joyful celebrations that most North American cities held. “Although the day was declared a public holiday, no civic victory celebrations were organized,” wrote Tennyson and Sarty. “More important, in the hope of keeping public celebrations under control, all dances and public entertainments were cancelled, and restaurants and stores were closed. Perhaps still more ill-advised, the liquor stores were closed as well.”

This left bands of men wandering the streets with no way to let out their emotions. Eventually, rioting erupted. Windows were smashed and liquor stores were looted. It took several days for order to be restored. People to this day argue about who was to blame.

Sydney Harbour had proven its worth in war. Some 7,500 ships had assembled into convoys there before making the dangerous journey to Britain.

After the war, the naval shipyards were busy with refits, but the military quickly reduced the army and air force presence. The ship work only lasted a few years and eventually even the steel and coal industries collapsed. Today, Cape Breton is more dependent on tourism than the military or the coal mines.

The Atlantic Memorial Park Society plans to develop a park with a beach, a picnic area, and walking trails with interpretive signs and to recreate an authentic First Nations replica encampment. When completed, it should be a boost to tourism, one that will remind visitors and locals of the noble role the harbour has played in Canada’s military past.