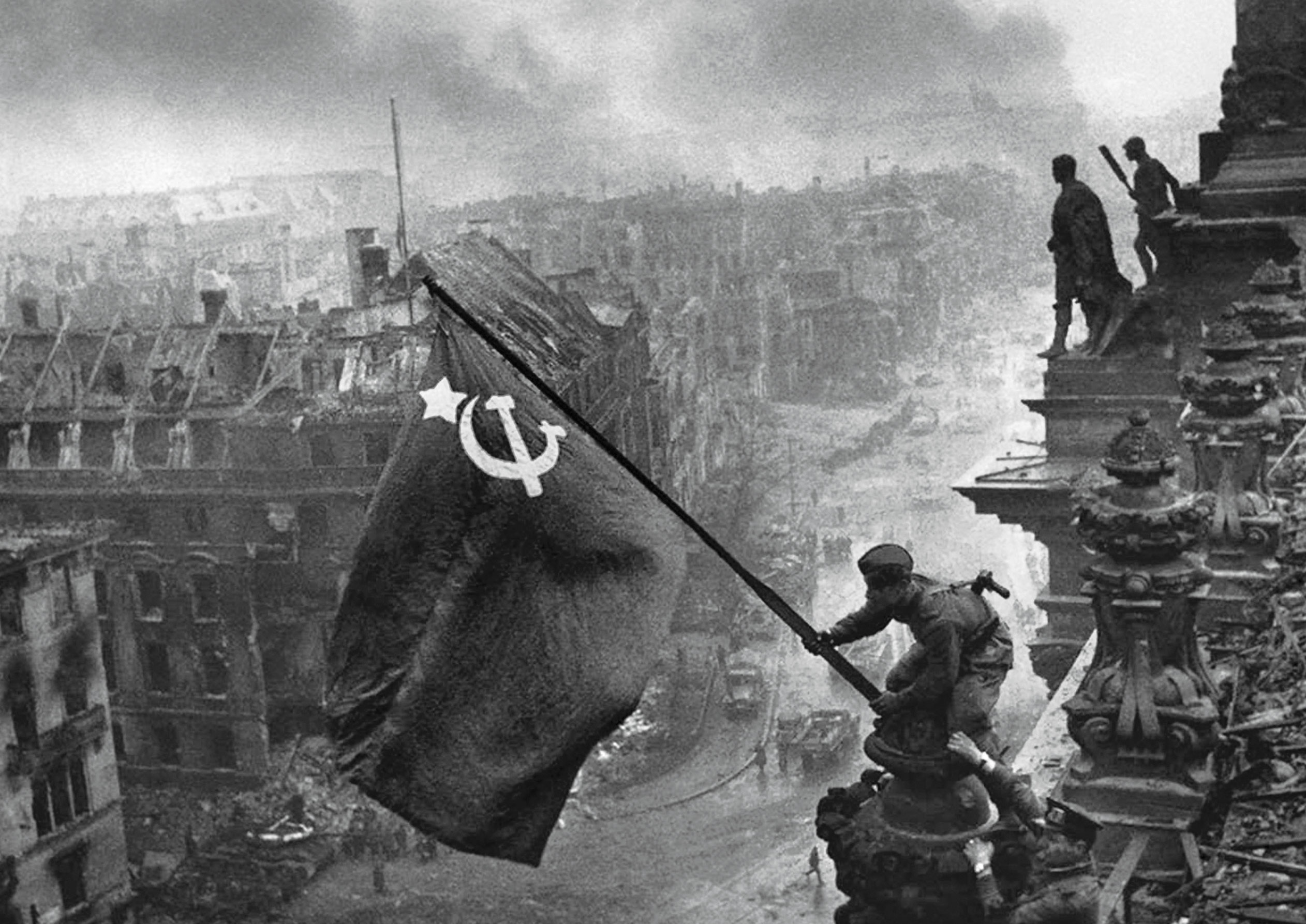 There are two certainties in war: death and suffering. Flag-raisings might be another.

Flags declare victory, as Red Army troops did (below) in raising the Hammer and Sickle over the Reichstag in Berlin on May 2, 1945. The flag, originally symbolizing the alliance of workers and peasants, was used in the Second World War as a sign of resistance against Nazism. This staged and altered photograph was composed at the request of Soviet premier Josef Stalin in the wake of the famous Joe Rosenthal photo of American Marines raising the U.S. flag on Iwo Jima, Japan, a few months previous. Like the Iwo Jima flag-raising (which was not staged), the Hammer and Sickle picture was used as propaganda, to send a message, inspire and reassure soldiers and the populace at large that the good fight was being fought—and won. 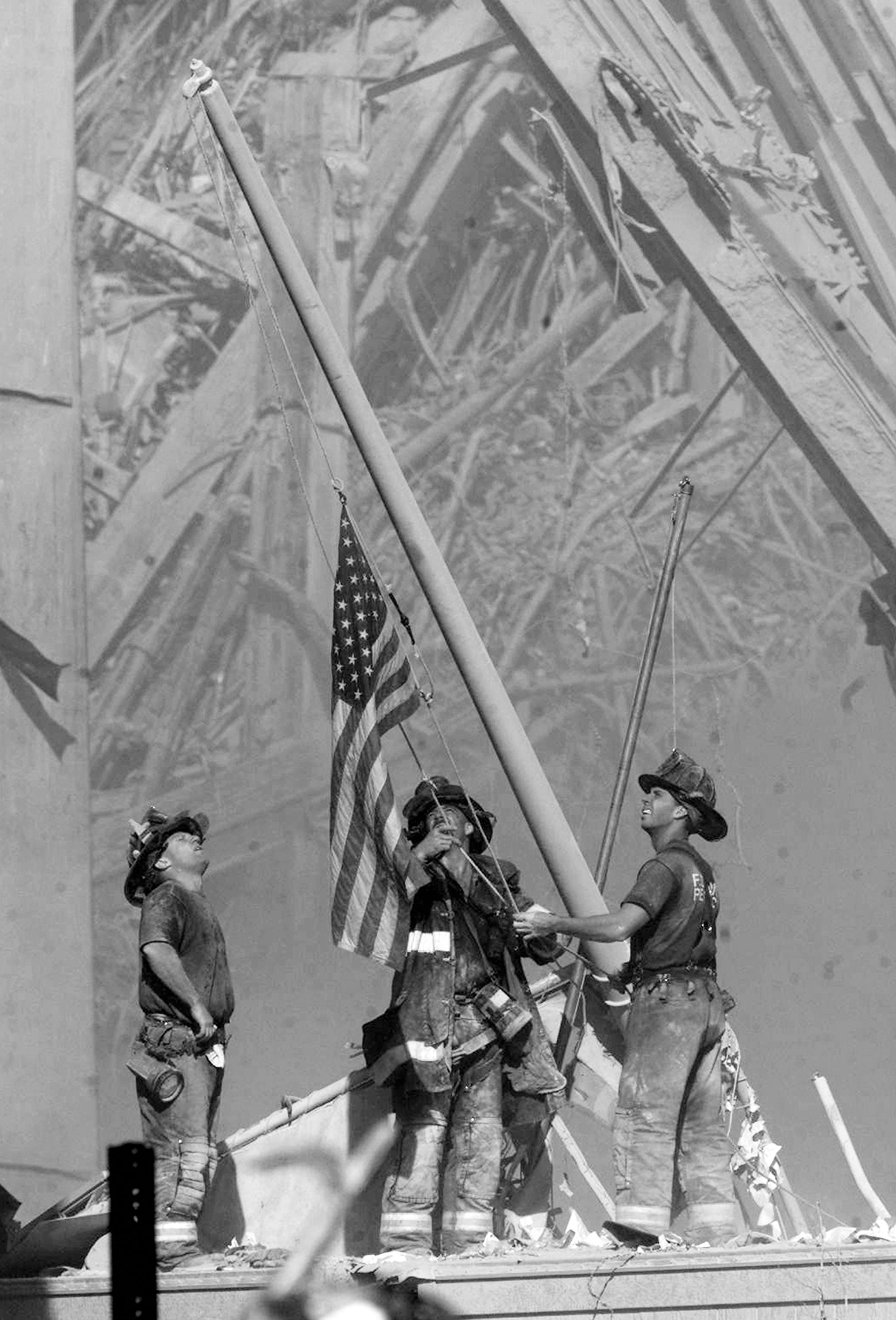 Hours after terrorists brought down the twin towers of the World Trade Center in New York during attacks against the United States on Sept. 11, 2001, firefighters (opposite) raised the Stars and Stripes at Ground Zero. It was more a declaration of resolve than triumph, amounting to the message that America might be down but not out, that it would rise again, much as it did after the Japanese attack on Pearl Harbor in December 1941.

The first war in recorded history took place in 2700 BC in Mesopotamia, an ancient region burdened still by tension, conflict and insurgency. There appears to be no end to the recurrent chronicles of war. 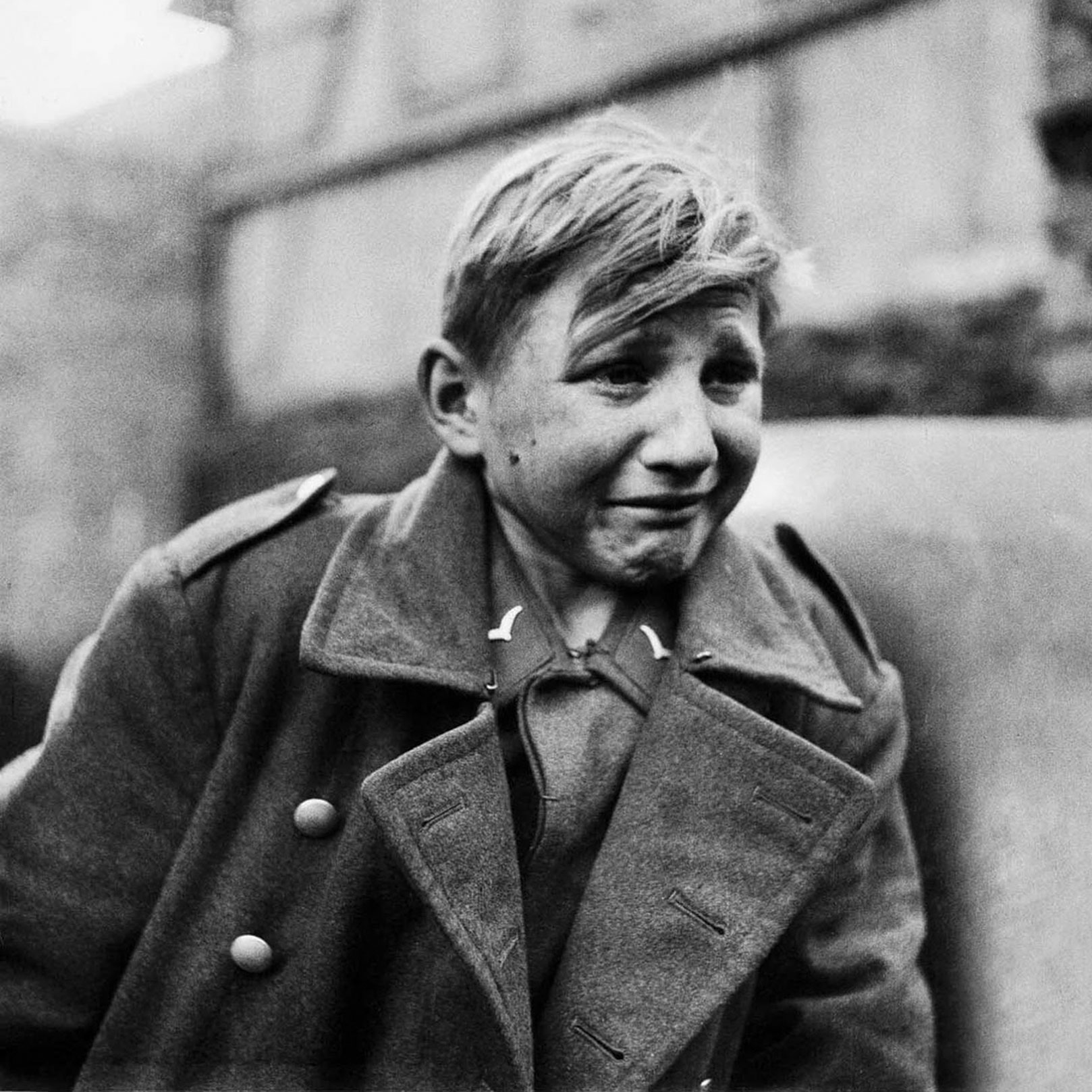 Hans-Georg Henke (above), who claimed to be a 15-year-old member of Germany’s Luftwaffe anti-air battery, was captured by the U.S. 9th Army on April 3, 1945. German boys were forced to join the national militia at 16, but even younger boys were in uniform by war’s end.

Twelve-year-old Samboo and another young soldier in the Karen National Liberation Army patrol near the Myanmar-Thailand border on Jan. 31, 2000. The Karen, an ethnolinguistic minority, have been in a long-running resistance to the Myanmar (formerly Burma) government. In 2001, some 50,000 children in Myanmar served in government or opposition armed forces, according to a UN report. In 2019, the Myanmar defence ministry reported that more than 1,700 child soldiers had been reunited with their parents, and about 800 military personnel who recruited them disciplined. 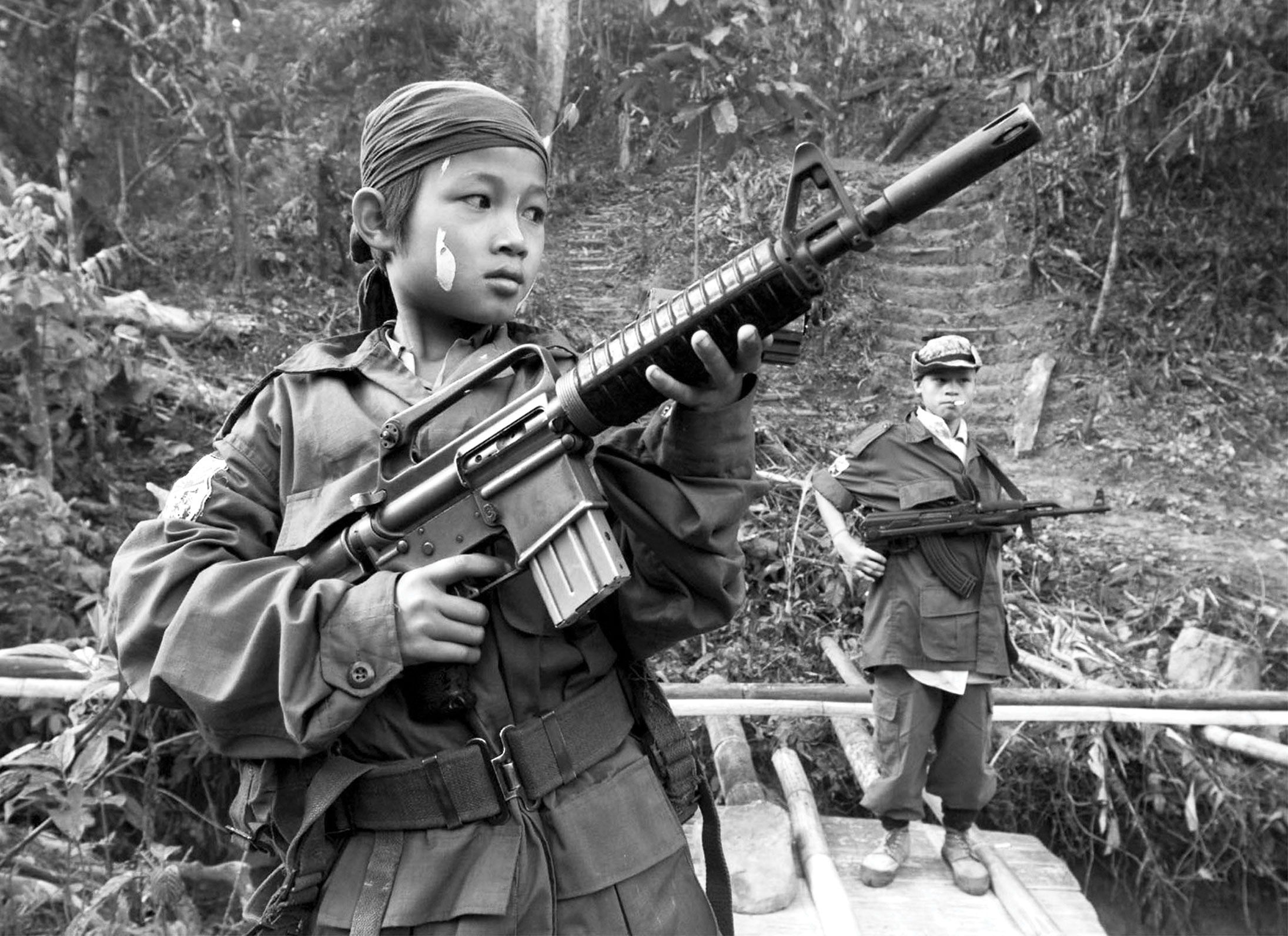 A bust of Adolf Hitler (above) sits amid the ruins of the Reich Chancellery in an image taken on July 6, 1945. Three days earlier, the body of Josef Goebbels—Hitler’s successor as chancellor
of Germany—was discovered in the Chancellery courtyard. Goebbels and his wife committed suicide, after poisoning their six children with cyanide. 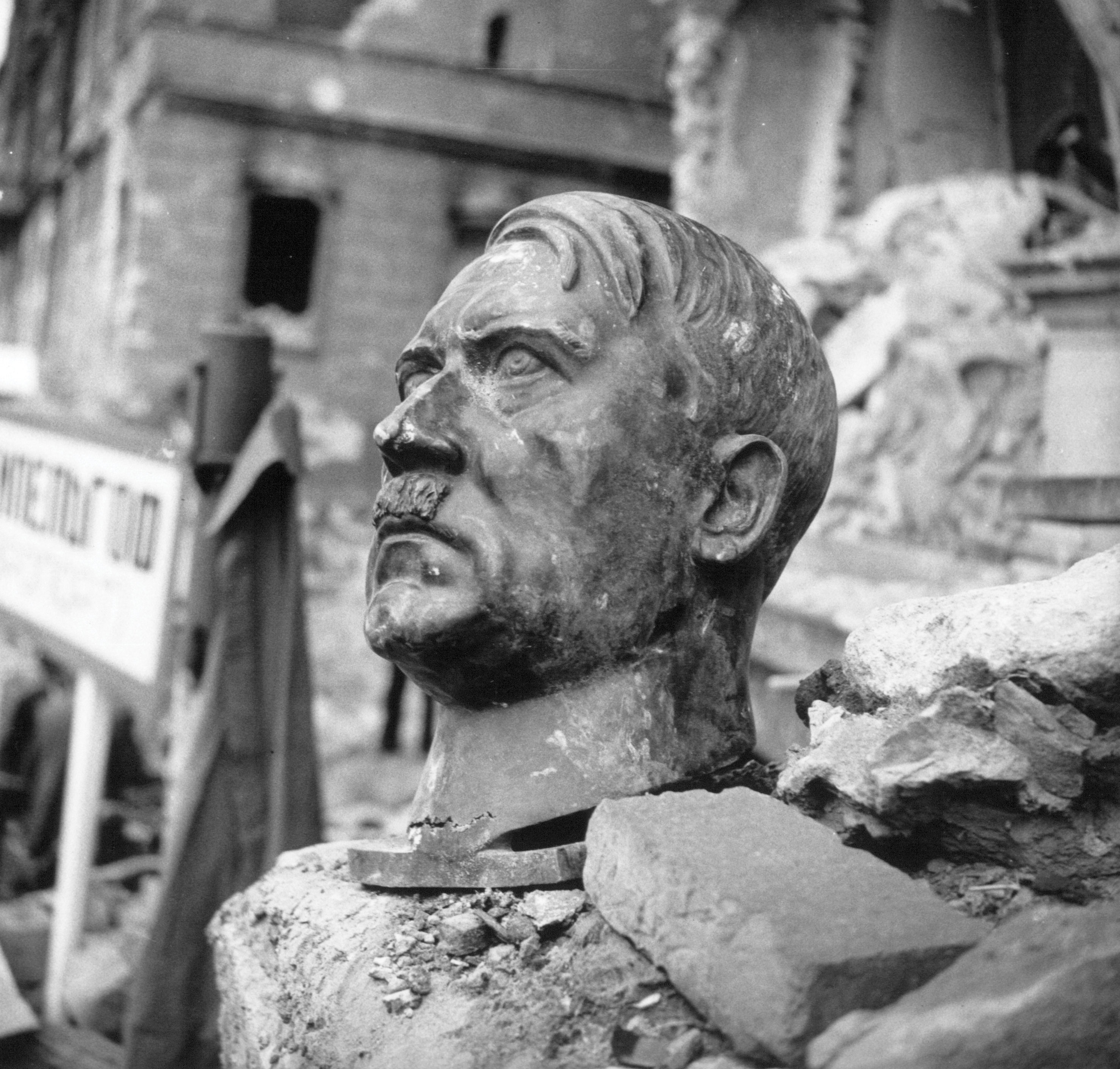 Fighters loyal to the jihadist group Jabhat al-Nusra and its allies (right) smash a statue of the late Syrian leader Hafez al-Assad, father of current president Bashar al-Assad, after taking the Syrian city of Idlib on March 29, 2015. Statues and monuments have long been targets of conquering armies and liberated populations who suffered under brutal dictators and oppressive regimes. 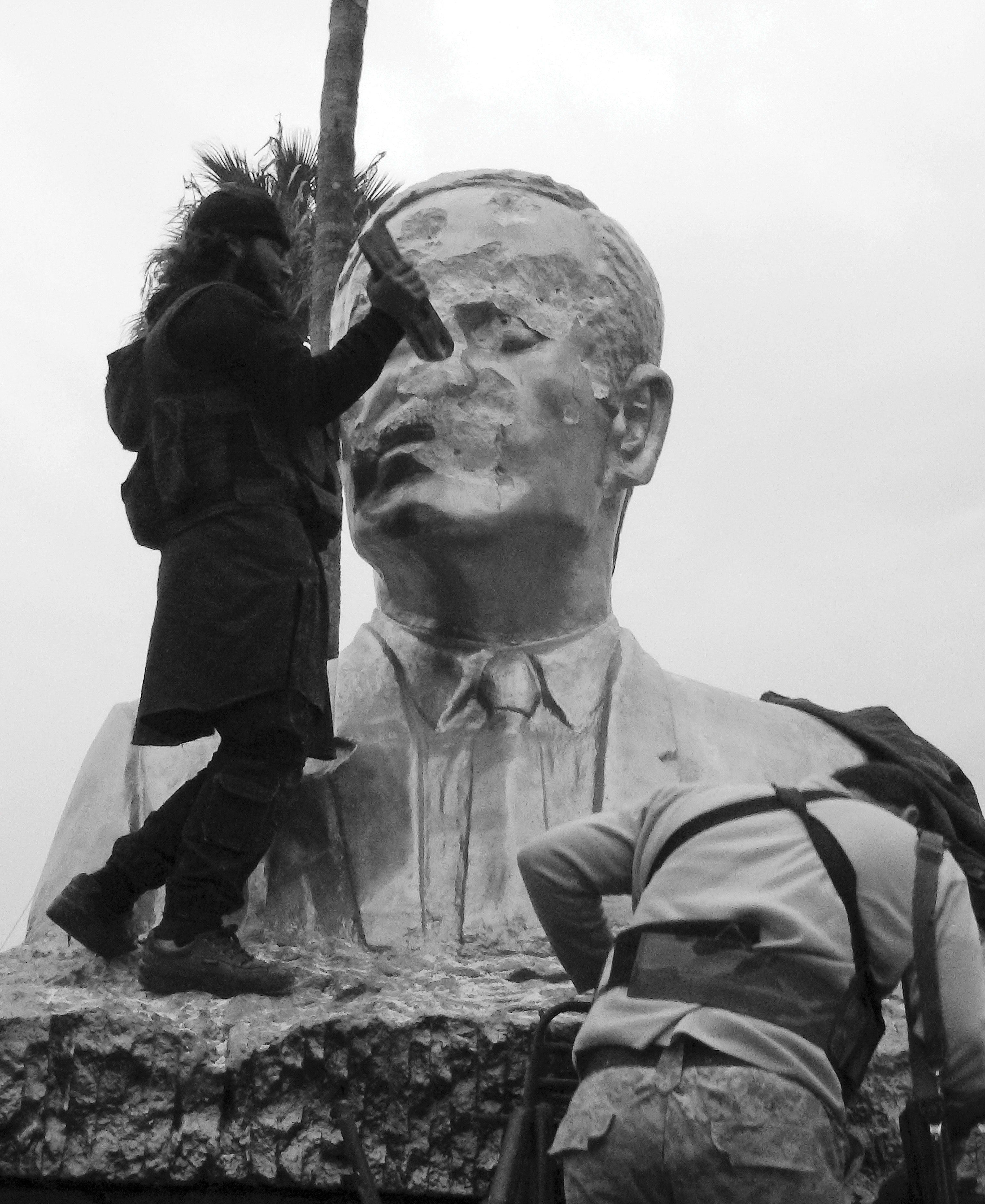 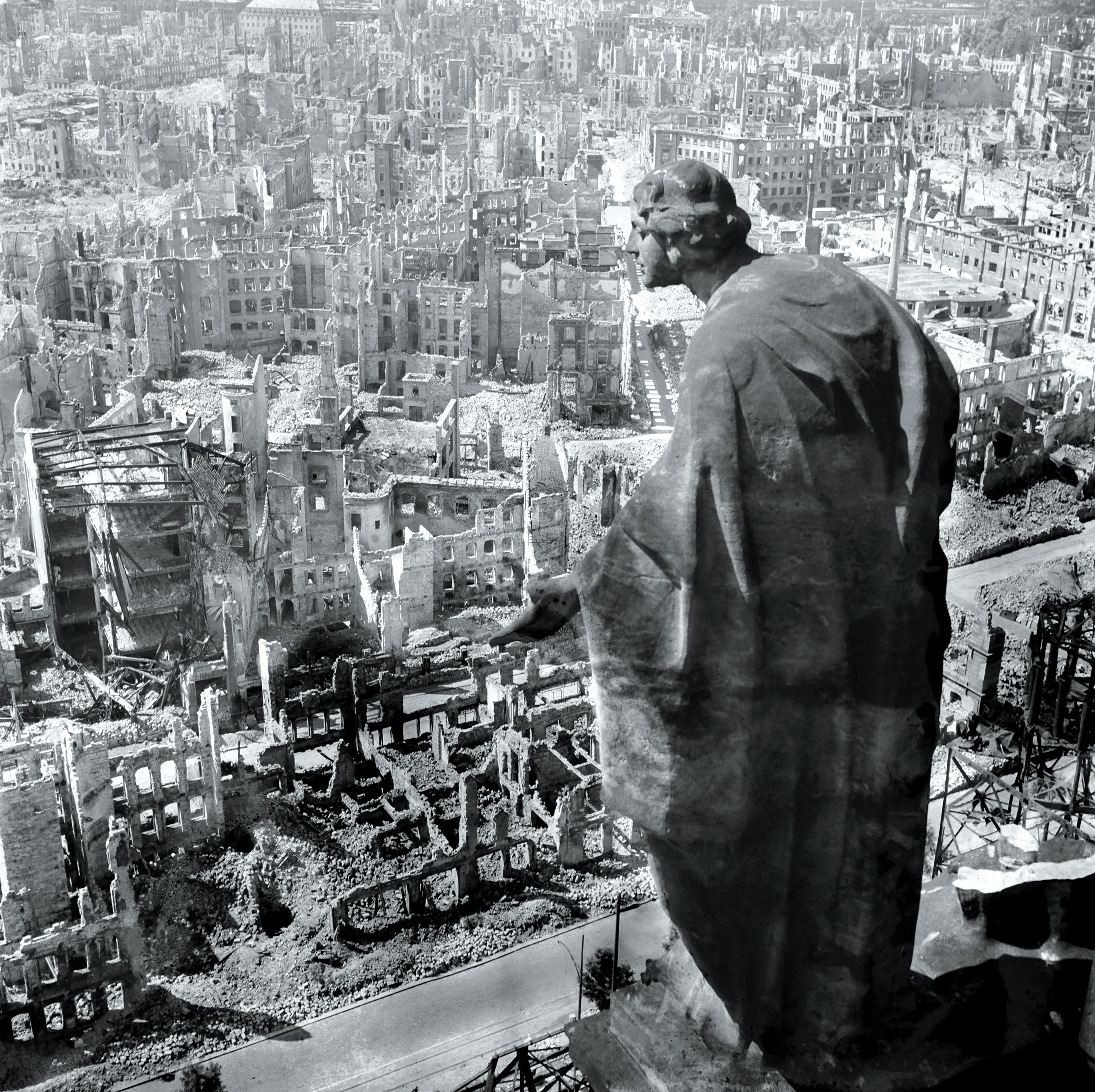 Atop the city hall tower in Dresden, Germany, August Schreitmüller’s sandstone statue Gute (The Goodness) overlooks the ruins of the city in 1946 (right), after somehow surviving intense Allied bombings in February 1945. The resulting firestorm killed thousands of civilians, soldiers and prisoners of war. The destruction of Dresden—a centre of art and culture for centuries—remains one of the most controversial Allied actions of the war. 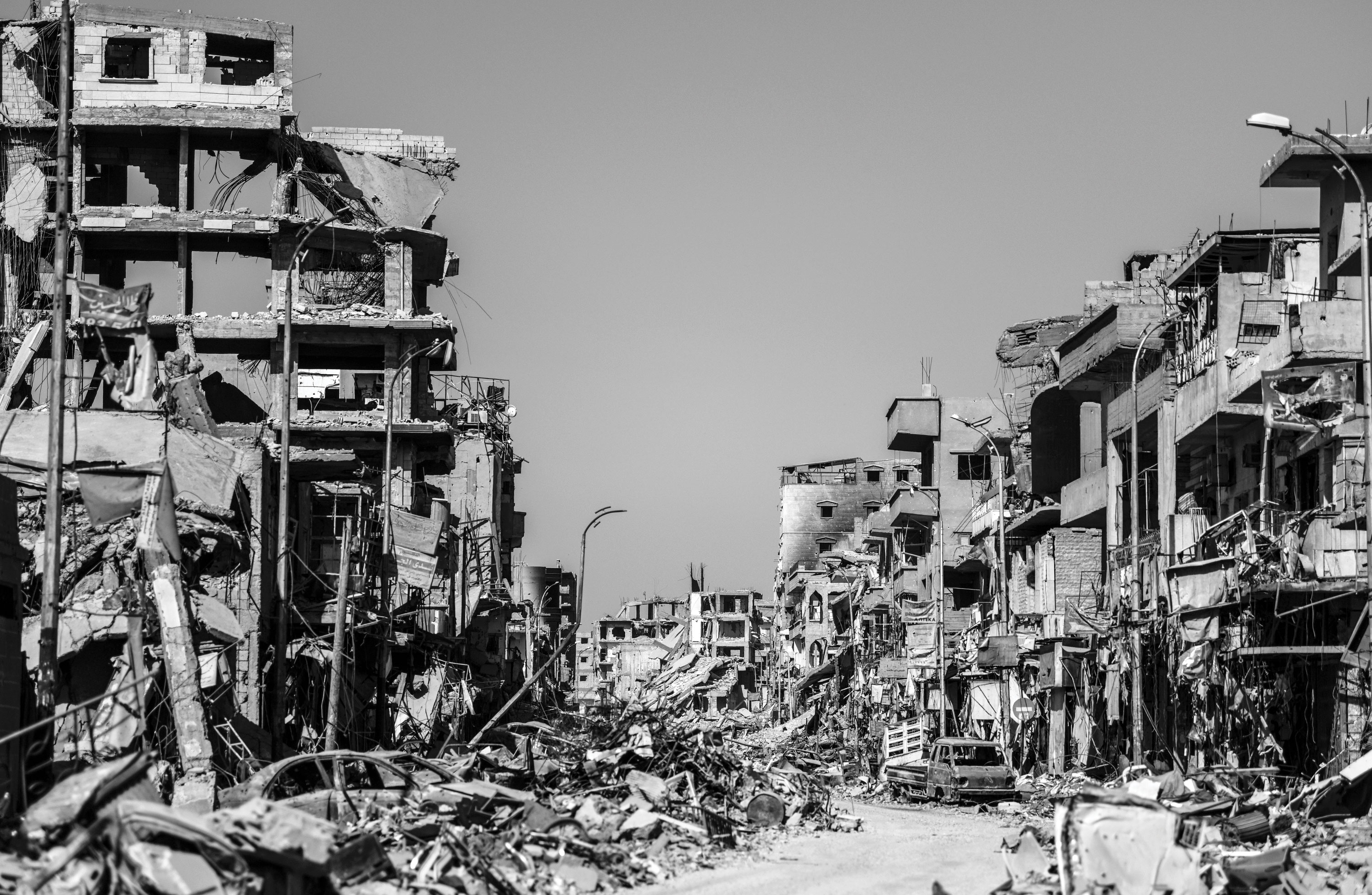 The Battle of Raqqa—a four-month offensive by Kurdish-led forces against the Islamic State—levelled the ancient city on the Euphrates River in northern Syria. This image was taken on Oct. 21, 2017, four days after Syrian Democratic Forces declared victory against the jihadist group’s de facto capital. 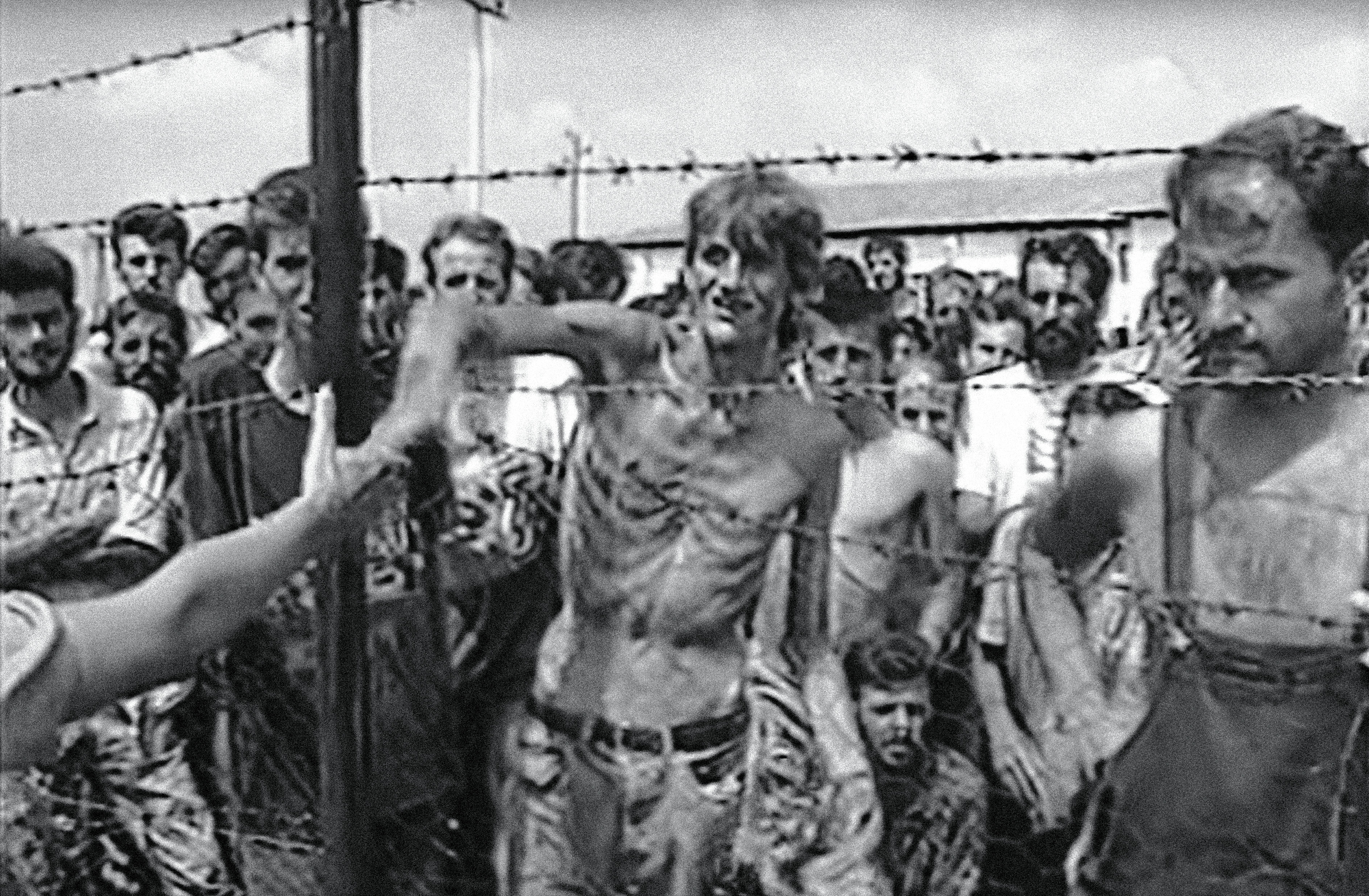 ITN
An emaciated Fikret Alic (left, at centre) was among Bosnian Muslims imprisoned in Trnopolje in northeastern Bosnia-Herzegovina in 1992. The separatist Serb government attempted to remove non-Serbs from areas in Bosnia, during which some 45,000 people were killed or went missing. Alic lived to see his jailer, Bosnian Serb General Ratko Mladić, convicted of war crimes and genocide in 2017. Prisoners stare from behind barbed wire (above) at Buchenwald concentration camp—one of the first and the largest of the Nazi camps—in central Germany. Using a secret short-wave transmitter, inmates issued this message on April 8, 1945: “To the Allies. To the army of General Patton. This is the Buchenwald concentration camp. SOS. We request help. They want to evacuate us. The SS wants to destroy us.” To which the U.S. army immediately responded: “Hold out. Rushing to your aid. Staff of Third Army.” The Americans liberated Buchenwald three days later. 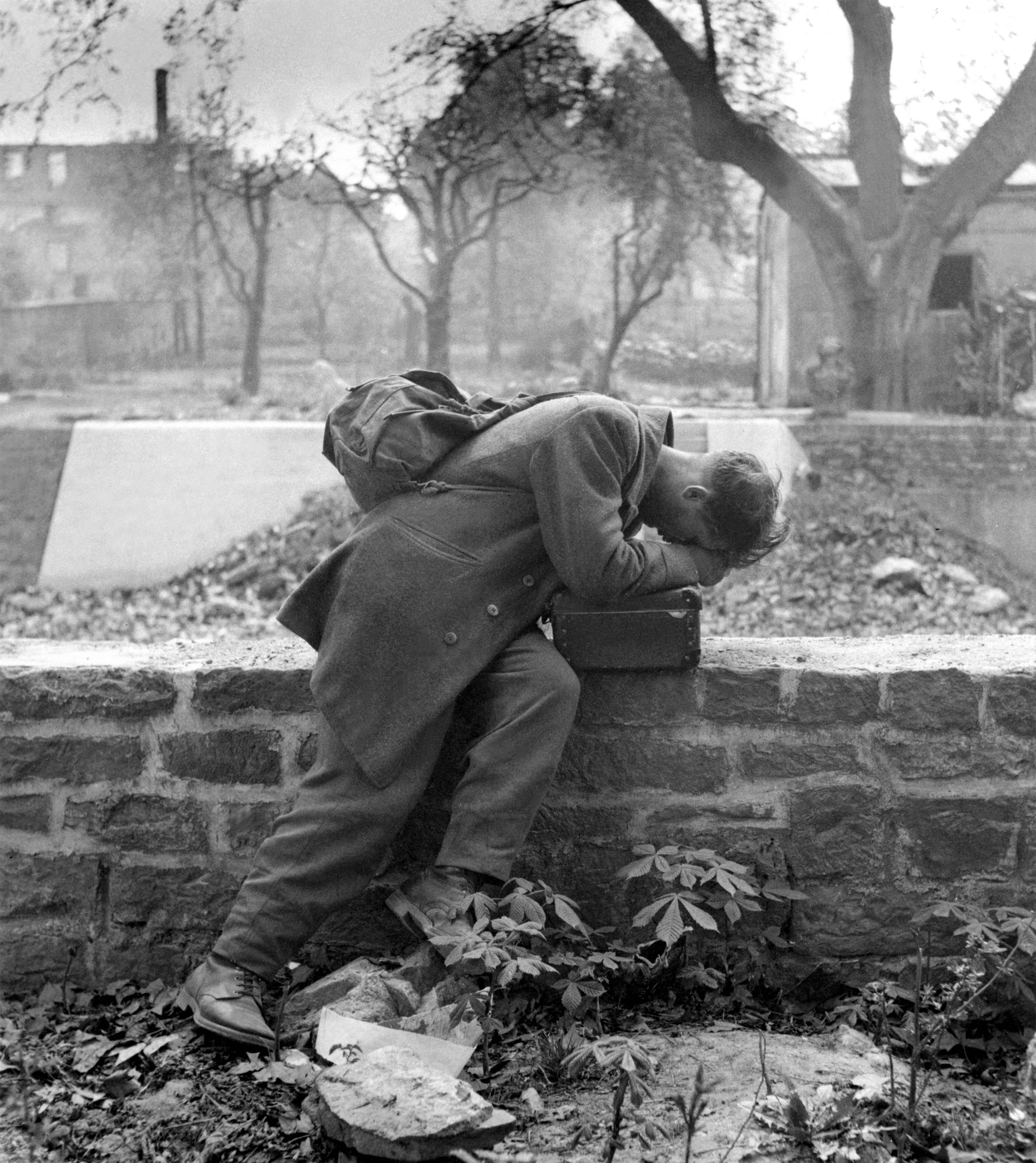 A German soldier (above) returns to his home in Frankfurt in March 1946, only to find it destroyed and his family gone. 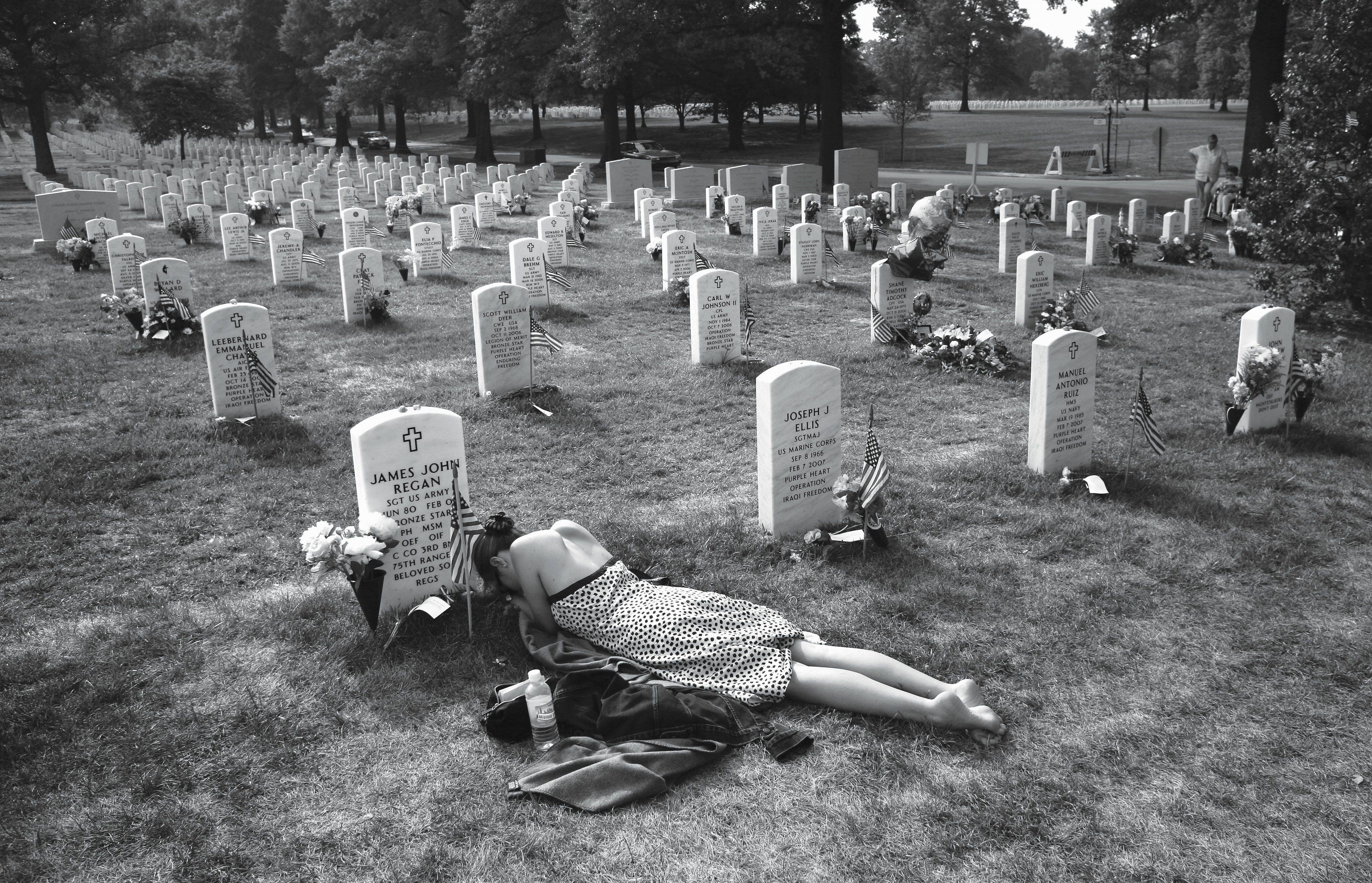 Mary McHugh (above) mourns her dead fiancé, Sergeant James John Regan, in Section 60 at the Arlington National Cemetery in Virginia on May 27, 2007. “I saw Mary lying on the grass and speaking into the marble, as if there was so much left to say,” photographer John Moore told The Guardian. “As we had already spoken at some length, I felt comfortable taking a few pictures, while trying not to disturb her.”