Fighting in the Rhineland 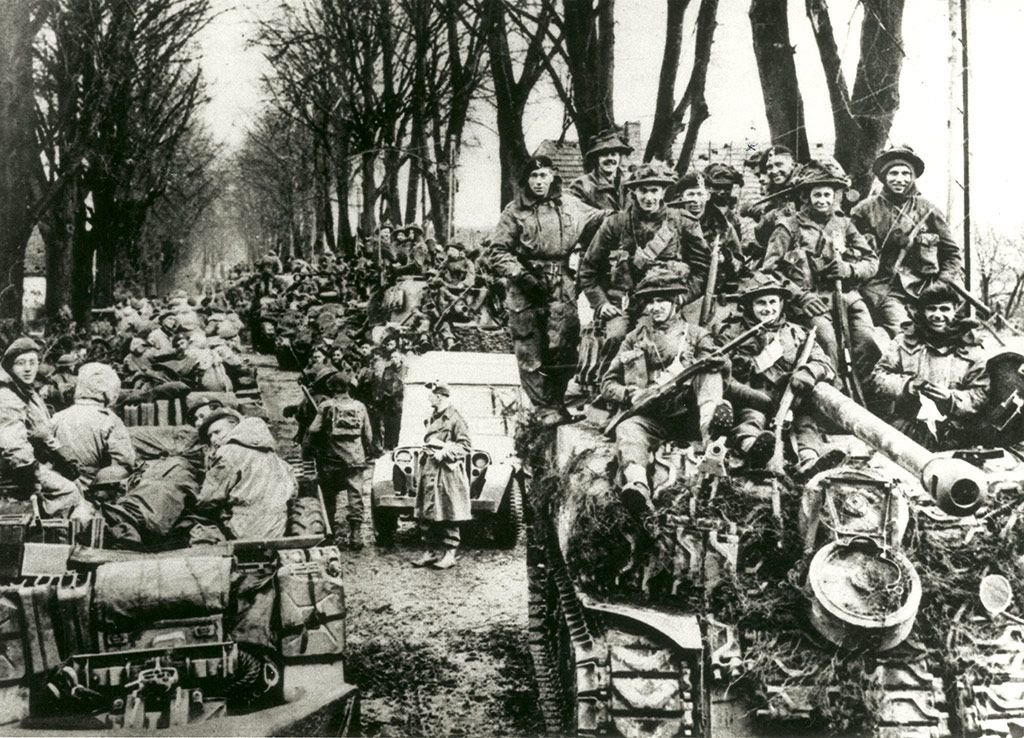 Canadian troops mass for Operation Veritable, the push into the Rhineland in February 1945.
Liberation Route Europe
First Canadian Army saw its first combat on German soil during the Second World War at the Battle of the Rhineland between Feb. 8 and March 11, 1945. And bloody it was.

The Germans were heavily armed, well supplied and fanatical, dug in behind a network of trenches and machine-gun nests in three defensive lines, including the Siegfried Line, built in the 1930s through the Reichswald Forest, and another line of fortifications through the Hochwald Forest. They had been ordered by Adolf Hitler personally not to give up German soil.

The Allied plan was to encircle German forces in the Rhineland, an area between the Roer and Rhine rivers, in a pincer movement. American forces were to attack from the south, Canadian and British from the north.

But it didn’t go entirely as planned. The Germans, expecting the attack, destroyed dikes along the Roer and flooded the area, stalling the advance of the U.S. Ninth Army. The Canadians and British began on their own, hampered by warm weather that thawed the ground into a quagmire.

Operation Veritable started on Feb. 8 in rain and cold, its objectives to clear the Reichswald, breach the Seigfried Line, secure the Hochwald Forest and advance to Xanten, west of the Rhine River, about 50 kilometres north of Dusseldorf.

Lieutenant-General Harry Crerar commanded the largest Canadian-led field army in history: by war’s end, nearly half a million men of Canadian infantry and armoured divisions, nine British divisions, and Belgian, Dutch and Polish units. It was armed with 3,400 tanks and 1,200 artillery pieces.

Clearing the Reichswald Forest was the British objective, while the Water Rats, 3rd Canadian Division, headed their Buffalo amphibious vehicles over flooded land to the Nijmegen-Calcar road.

After two weeks of fierce fighting, First Canadian Army was hanging out their washing on the Siegfried Line, as a popular song of the era foretold. The cost to the Allies was 8,500 casualties, of which nearly 1,800 were Canadian. The German toll was higher—11,778 prisoners of war, and 12,000 killed.

Next, a series of battles was planned for a First Canadian Army breakthrough in the north.

Operation Blockbuster, a concentrated attack to take the Hochwald Forest and surrounding area, started on Feb. 25. “Resistance was fanatical and a very small number of prisoners were taken,” noted the Algonquin Regiment diary.

Part of the action earned Sergeant Aubrey Cosens a Victoria Cross. As the Queen’s Own Rifles targeted Mooshof, Cosens’ platoon, supported by two tanks, attacked three farm buildings on Feb. 26.  Fierce counterattacks forced them back twice, with heavy casualties. Only four survived; the platoon commander had been killed and one tank knocked out.

Cosens took command, ordering covering fire as he ran to the remaining tank, directing it to attack the German strongpoints in farm buildings. After the tank rammed the buildings, and despite heavy machine-gun fire, Cosens entered the structures alone and killed at least 20 defenders and took a score of prisoners. He later fell victim to a fatal sniper shot.

The Canadians captured Xanten on March 10, the Germans retreated over the river and the next day, the Ninth U.S. Army captured the left bank of the Rhine. Casualties totalled nearly 23,000 for the Allies, but 90,000 for the Germans, including 52,000 taken prisoner.