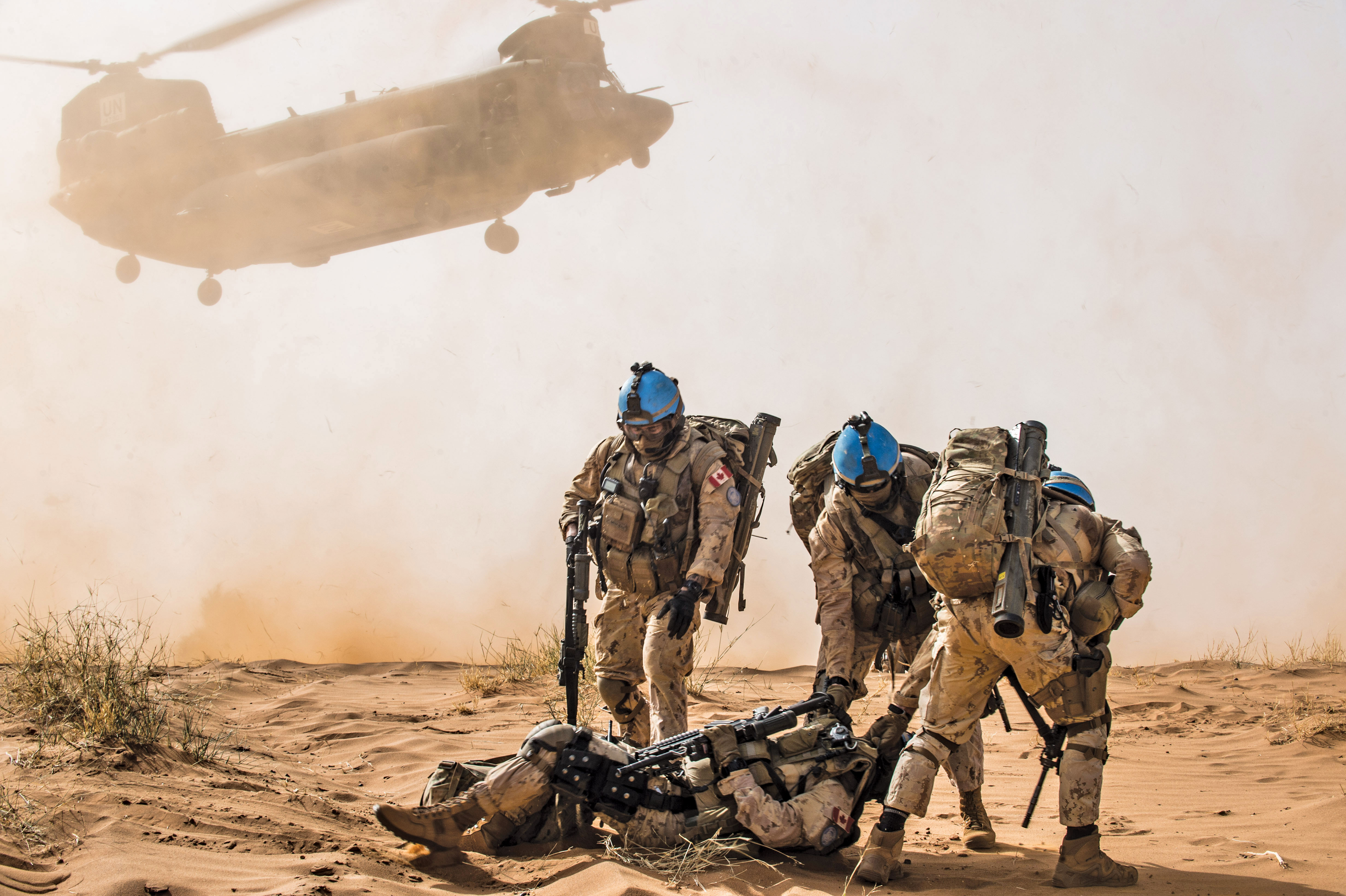 Members of a CAF force protection team assist a simulated casualty during an exercise in Mali in December 2018.
Cpl. Ken Beliwicz/Combat Camera/TM01-2018-0151-26

The 10th anniversary of the Canadian Institute for Military and Veteran Health Research forum provides an opportunity to look back—and to look forward.

A decade ago, nobody had yet counted the number of homeless veterans or veterans’ suicides in Canada; today there are robust programs tackling both—and involving the whole of society, including government departments, civilian agencies and veterans’ advocacy organizations such as The Royal Canadian Legion. Similar leaps in knowledge have been made on every front, from diagnosis to treatment to prevention, for serving members of the military, veterans, RCMP and their families.

CIMVHR has grown into a network of 1,700 researchers at dozens of universities, research institutes and government departments, tackling subjects massive and mundane, which individually and cumulatively have had an impact on military and veterans’ health.

Progress is being made even on problems that have so far defied solution, including one project funded in part by the Legion.

Blood loss is a leading cause of preventable death on the battlefield. Even with prompt care, wounded soldiers may bleed to death before reaching surgery or die of hemorrhagic shock, a cascade of organ and system failure due to loss of blood volume and lack of oxygen.

Applying pressure and repairing damaged vessels is the solution, but it may not be possible on the battlefield to staunch blood loss from large or complex wounds—to the abdomen, for example, where pressure cannot be applied. And when is there time, on a battlefield, for surgery?

Now in development are three mechanical devices for use while a soldier is rushed from battlefield to surgery: tiny balloons that can be inserted into arteries to stop bleeding from vessels downstream; expandable foam that can be administered on large abdominal wounds to exert pressure to stop bleeds; and an abdominal tourniquet to stop blood flow to the pelvis and lower extremities to slow or stop massive bleeding from complex wounds from, for example, improvised explosive devices.

Parallel research is looking at ways to stop the bleeding right where the blood vessel is damaged, including that of a team at the University of British Columbia which includes Massimo Cau, who was awarded the 2018 Legion Masters Scholarship.

A number of agents have been developed to speed blood clotting, but severe blood flow can wash away coagulating agents, and in large wounds it’s difficult to reach all the damaged blood vessels, said Christian Kastrup, an assistant professor of biochemistry. The UBC team has developed porous micro-particles that bind with a clotting agent. The particles also contain carbon carbonate, which produces carbon dioxide on contact with blood—similar to the familiar fizz of an antacid tablet plopped into water—and propels the particles where needed.

Experiments showed the self-propelled particles are effective, increasing the survival rate of animals with a femoral artery hemorrhage to 100 per cent, from just 40 per cent when the particles were merely embedded in gauze applied to the surface of the wound. The substance is yet to be tested on humans.

Cau is working on a way to incorporate the micro-particles into uniforms of combat soldiers, perhaps by spray-coating the inside of clothing, or through a network of tiny tubes.

Large amounts of the substance can be embedded without risk to the wearer, he said in his presentation, and it does not need a medic to begin to work. If embedded in uniforms, the substance automatically begins working when it comes into contact with blood. Alternately, it could be triggered by soldiers themselves or battle buddies—or medics at a remote location.

In 2012, Canada was awarded the Dominique-Jean Larrey Award for the remarkable 98 per cent survival rate of NATO casualties in Afghanistan who made it to the hospital under Canadian command, a feat attributable in part to such innovative research, said CAF epidemiologist Robert Hawes.

But research shows that 60 per cent of medical cases in Afghanistan were not caused by the enemy, but by collisions, falls and occupational injuries. This not only underscores “the need to deploy multidisciplinary and specialty (medical) teams into combat zones—general-duty medical officers and nurses, social workers and psychiatrists, occupational therapists and others,” but reveals targets for future research that can result in improvements to screening methods, hygiene regimes and safety protocols that can reduce the number of evacuations from theatre for non-battlefield injuries.

The CIMVHR network is not going to run short of subjects to research any time soon.